Analyzing the Opioid Epidemic in Connecticut: 2014-2016

At the end of 2016, a Stat News article declared that over 59,000 Americans had died of drug overdoses, the most ever recorded in the course of a year. The article highlighted the growing national abuse of heroin and prescription painkillers. In light of this national crisis, this project focuses a spotlight on the state of Connecticut. Using opioid use datasets from 2014-2016, demographic, educational, and geographic factors are examined to answer the following questions:

1) Which populations have been hardest hit by the opioid crisis?

2) How can the government intervene most effectively to prevent deaths?

In order to assess distribution and use of opioids in the state of Connecticut, datasets were taken from multiple sources:
1) Kaggle.com
https://www.kaggle.com/apryor6/us-opiate-prescriptions

Datasets from Kaggle provided information on counts of opioid-related overdoses by US state as well as a breakdown of the opioid prescriptions written across various medical specialties. Further details within the "Opioid Prescriber" dataset could yield interesting insights into which medical specialties are prescribing opioids in cases in which a different drug could be substituted. Datasets from Data.gov provided detailed information on accidental drug-related deaths in the state of Connecticut from 2012-2016, which was filtered down to the years 2014 and 2016 for the purpose of this analysis. The dataset "Opioid-related treatment admissions by town in the department of mental health and addiction" was also used to compare locations of opioid-related death to locations of active opioid addiction treatment centres.

-Connecticut has been hit hard by the national opioid crisis, which appears to be growing and gaining local and national concern

-Connecticut offers an interesting model for study: Opioid use and prescription data is readily available, different demographic and social extremes are open to analysis, and the question of how to quell the medical crisis remains unresolved

which populations have been hardest hit by the opioid crisis?

In order to answer the first question, the dataset from Data.gov reporting opioid-related deaths from 2012-2016 was filtered and analysed. The analysis focused on data from the year 2014, in order to match it with the data on opioid prescriptions and to isolate a period in time.

The final Shiny app contains a histogram with opioid-related deaths broken down by age. The resulting plot shows that opioid-related deaths seem to fall largely within two age ranges: mid-20s to mid-30s and mid-50s to mid-60s. This is likely due to the many forms that opioid drugs take; opioids encompass both recreational heroin and its variants as well as a broad spectrum of painkillers.  To further understand demographic trends, counts were produced of all opioid-related deaths by race and then compared to racial demographics in the state of Connecticut. A Chi-squared test showed that generally, males were over-represented in the opioid category and white and hispanic males were significantly over-represented. 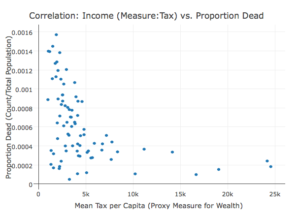 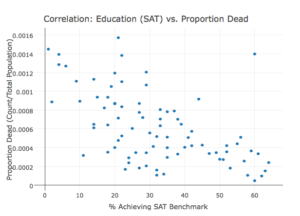 How can the local government intervene most effectively to prevent deaths?

In order to understand how the local government can help potential and current opioid-users, it must be able to measure the efficacy of current treatment strategies as well as pinpoint trackable sources of drugs.

In order to pinpoint trackable sources of drugs, data was taken from the Kaggle "Opioid-Prescriber" dataset and opioid prescriptions written in Connecticut were sorted by medical specialty in order to create a bar graph. This information can be useful in helping the local government understand which doctors are writing the most prescriptions and should be tracked most closely. This data can be further analysed in order to find out which specific clinicians are writing the most prescriptions and for how many/which drugs.

Overall, this project provided valuable analysis to understand which groups are being affected by the opioid epidemic in Connecticut and what steps the local government can take to help them. It seems that both young (25-35 years old) and middle-aged (50-60 years old) individuals were highly affected and white and hispanic males were very over-represented in this group. Low educational achievement, as measured via % SAT benchmark achievement in each town, was highly correlated with proportion of the town population dying from opioid-related death, showing that social factors are also significant.

Positively, the map of treatment centre locations vs. locations of opioid-related deaths show where the local government could re-allocate resources in order to provide more help to areas in need. The bar graph depicting the number of opioid prescriptions written across various medical specialties can also begin to help the state government trace where opioid prescriptions are coming from and in which cases they can be stopped. Though this project is only a preliminary effort, it shows how publicly available data can be used to answer interesting and societally-relevant problems.

Katie graduated from the University of Pennsylvania with a Bachelor's degree in Neuroscience and an Honor's thesis focused on protein-modeling in neurodegenerative diseases. She worked previously at Booz Allen Hamilton in the military healthcare division. Katie has joined...
View all posts by Katie Critelli >