With the everyday reports of the current and looming world problems due to climate change, a look at the world energy consumption has shed some light on what may be the most imminent steps that can be taken to possibly slow global warming. What may come as no surprise to many, China is key.

A shiny app is built that helps look at the world population by country along with the top forms of energy consumption in 2009 and makes some comparisons to 1994 (three years after the fall of the Soviet Union). Some of what the app reveals is highlighted here, but the app can be used by anyone to look at an area of the world that interests them and find compelling trends to further research. Below is a snapshot of the app, which features three interactive maps. 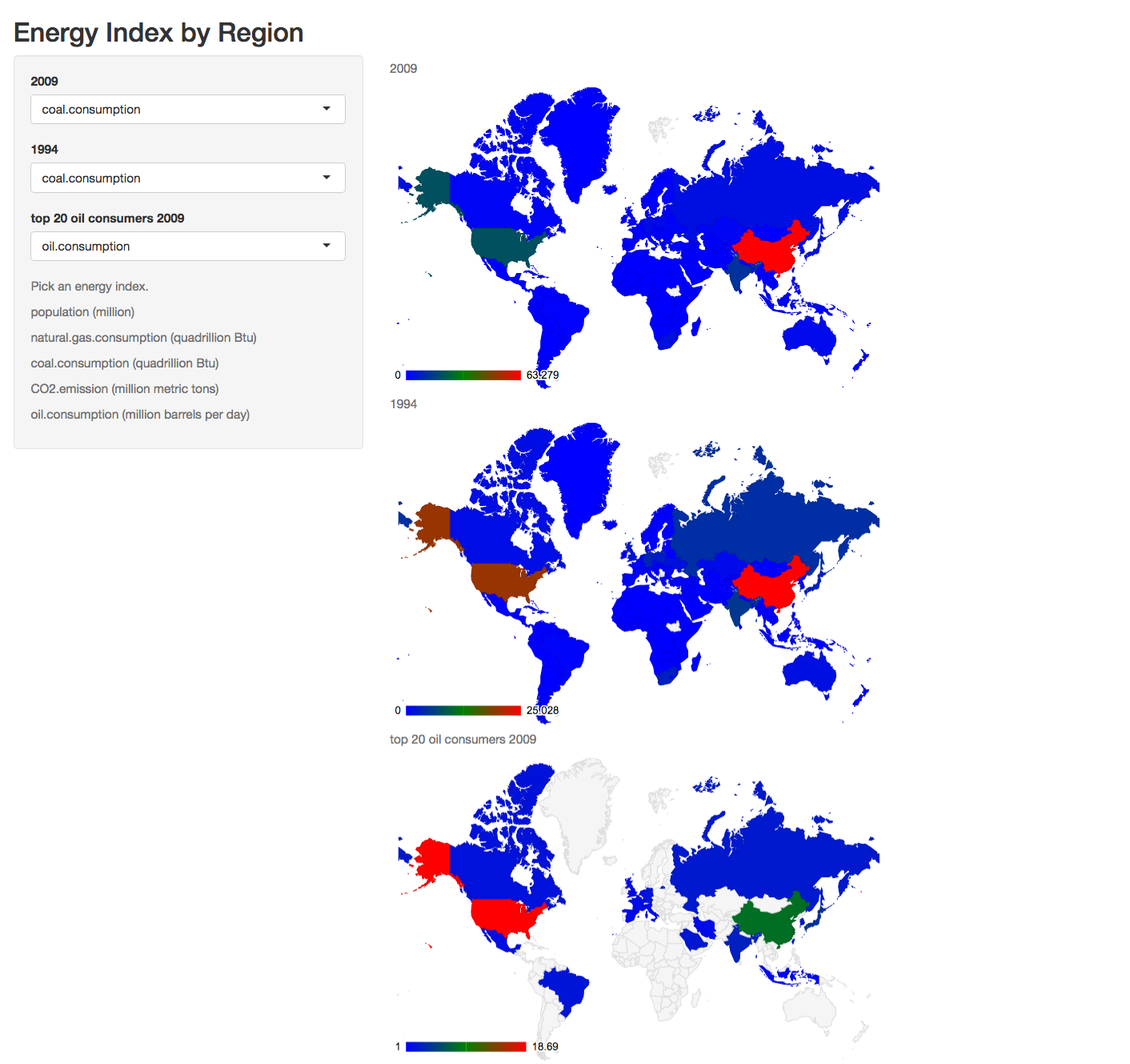 There are a few interesting trends that the app revealed in the world population from 1994 to 2009. Particularly, while the populations of most of the major countries increased between the 15 year period, the population of Russia decreased from 148.442 to 140.041 million. This massive decline in population can be attributed to a combination of low birth rates, a sharp increase in mortality and mass immigration that all followed the collapse of the Soviet Union. Meanwhile, the population of China increased from 1,203.802 to 1,323.592 million, almost a 10 percent growth. However, this was a lower rate of population growth than what the United States experienced during this time, growing from 263.126 to 307.007 million, which is a 16.7 percent gain. The biggest change in population happened in India as its population grew from 903.579 to 1,156.898 million, approximately a 28 percent growth. Even with India’s large population growth, China still remained the most populous country, and in 2009 it had the second largest economy in the world in GDP. Given these population trends, it is important to see what the energy consumption patterns for these countries were.

Natural gas is the cleanest fossil fuel, meaning it releases the least amount of CO2 and other harmful byproducts when it is burned. The app shows that both in 1994 and in 2009 the United States was largest consumer of natural gas followed by Russia. However, it also shows that China is a relatively small consumer of this relatively clean fossil fuel. While its consumption increased from 0.656 to 3.266 quadrillion Btu between the two years, its consumption in 2009 was still comparable to that of the country of Great Britain, which consumed 3.336 quadrillion Btu in 2009. Considering that China’s population in 2009 was 21.26 times that of Great Britain, it is obvious that its use of natural gas is greatly under utilized.

Instead, China was the largest consumer of coal in the world both in 1994 and in 2009, with coal being the dirtiest fossil fuel to burn (Figure 1). However, in 2009 it was the largest consumer of coal in the world by a much larger extent. To underline the significance of this, the app shows that the United States, which was the second largest coal consumer in the world both years, kept its consumption virtually the same (19.968 and 19.668 quadrillion Btu in the two years respectively). In the meantime, China’s coal consumption grew from 25.02 to 63.279 quadrillion Btu, a 2.5 times increase! Not surprisingly, the app reveals that in 2009, China was the greatest producer of CO2 in the world, by far.

Given these findings, it is hard to see how the world will combat its CO2 emission in the near future without addressing China’s dependence on coal. And no one is perhaps more concerned about this than China itself. There is hope on the horizon. In 2014, China and Russia signed a 30 year $400 billion natural gas deal. In this deal Russia would provide China with natural gas from its pipelines to China’s pipelines in the North. Since the original signing there have been additions to the deal. China will also be importing more natural gas from other countries (Australia, US), but Russia looks poised to be its biggest single provider of natural gas in the near future.