Starting with basic consoles such as the Nintendo 64 and the original Playstation through modern consoles such as the Xbox One and Playstation 4 the history of video game sales has been constantly evolving through the years. Through this shiny app we will take a look at what has been fueling commercially successful games and explore how overtime there have been shifts in the popularity of specific genre's as well as the regions around the globe that produce the most video game sales.

To begin I wanted to simply take a high-level look at the most commercially and highest rated video games from 1980-2016. An interesting trend that I noticed was that from 1980 to the late 90's not only were the amount of Global Sales (in millions of units sold) not as high as in the early 2000's to present day, but also there simply weren't video game reviews. 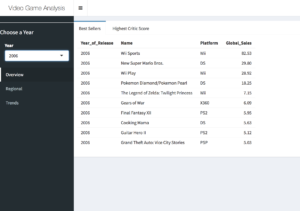 The economic presence of video game sales hadn't reached the point to command reviews and games that initially came out weren't sophisticated enough to merit in depth reviews. Another observation was that in 2006 the highest selling game cam out: Wii Sports. Not only did this game come with the Wii platform, but the game is simple and broad enough to garner mainstream appeal to the tune of over 80 million units sold worldwide.

Examining the regional data we can see that from 1980 to 1995 the 4 regions being examined (North America, Europe, Japan, and all other countries) had a relatively even market share of global video game sales. However, starting in 1996 you can see that North America and Europe begin to separate themselves with North America hitting it's peak market share in 2008-2009. Considering the first playstation came out in December 1994, the first Xbox in 2001, and the Wii in 2006, this can help explain the rapid growth in video game sales in these two regions. Starting in 2009 global video game sales as a whole begin to decline and the gap between North America, Europe, and the rest of the world begins to shrink.

Examining three main trends (Genre Changes, Console marketshare changes, and Publisher market share changes) we can see some interesting trends that corroborate what we've seen in our initial analysis. First, the growth of different game genre's can be attributed to more sophisticated consoles coming out. Second, the peak in 2008-2009 in Global sales and the steady decline afterwards is also reflected in the Trend Analysis.

When taking a look at the top 5 Publishers from the data set we can see that the main player is Nintendo with EA and Activision gaining market share in the early 2000's.

View all posts by Moe Hashem >