Net Metering - Is it beneficial to utility companies?

With advances in generating electricity using green power resources such as solar, wind, hydroelectric and biomass, it would be interesting to know if the usage of net metering has been beneficial to a supplier(utility company). The supplier provides the net metering unit to residential, commercial and industrial sectors who can generate their own electricity using renewable resources. The customers then feed the excess electricity back into the grid. Net metering laws are passed differently in every state but utilities may offer net metering programs voluntarily
or as a result of regulatory decision.

Net metering is basically a billing mechanism that credits green power system owners for the
electricity they add to the grid. For example if a residential customer has a photo voltaic system on
the home's rooftop, it may generate more electricity than the home uses during the daylight hours.
If the home is net metered, the electricity meter will run backwards to provide a credit against
what electricity is consumed at night or other periods where the home's electricity use exceeds
the systems's output. Customers are only billed for their net energy use. On average, only
20-40% of a solar energy system's output ever goes into the grid. Exported solar electricity
serves nearby customer's loads.

Green power is a focus of all utility companies today irrespective of the size of the company. However companies have to follow SEC regulations of the state and companies and government are still in dilemma if the use of green power is profitable for energy companies. As much as it reduces net carbon emissions and overall load on the main grid, it also poses a question of profitability.

The data has been collected from the US energy information administration website www.eia.gov. Various types of data were downloaded as per necessary in .csv format. Majority of data pertaining to Electricity were downloaded as below

The data was collected as needed and manipulated as data frames in R. 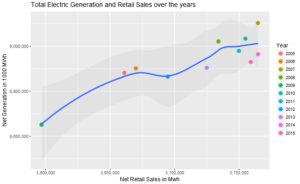 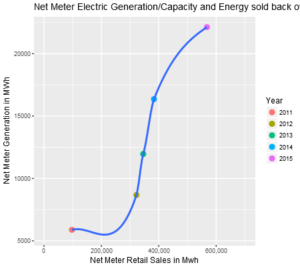 We will need to delve a little more in depth to find if the overall retail sales has increased due to energy sold back by customers with net meter or is it by chance. This will also help us answer if  the generation of electricity has lowered due to utilization of green power using net metering technology. This study will not use the actual dollar revenue rather retail sales in MWh which is a much better indicator of usage of power. The dollar value is varying considering the distribution, generation and transportation cost of electricity combined with state and federal taxes used to calculate the revenue from energy. The following is a study of retail sales per customer for each sector. 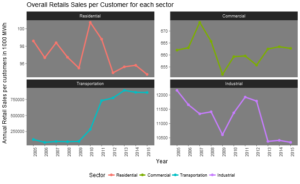 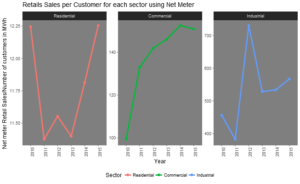 Overall we can say, that net meter use has increased over the years and reliability on electricity by residential, commercial and  industrial sectors has decreased but the transportation sector relies heavily on electricity generated from non-renewable resources. So it is still a possibility that utility companies are continuing to generate profits from green power as well as non-renewable resources.

Customer density map is a user interactive map showing the number of customers using net meter in a particular state. Clicking on any circle on the map displays customer numbers in the state. Users can select the sectors they would like to view. 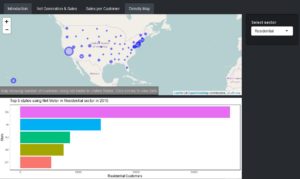 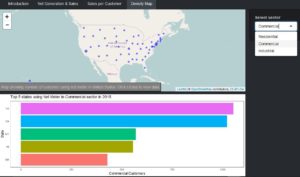 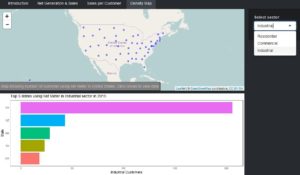 The bar plot below shows the top five states which has the largest customer base using net metering technology in each sector. Clearly, California emerges as the state with highest usage of green power in residential and industrial sector whereas New Jersey has the highest usage of green power in commercial sector followed by California. Overall, we can say that California is an emerging market for this technology.

Annie George has more than a decade of experience using mainframe technology and databases such as DB2 and SQLServer to achieve results for organizations in the private sectors. Annie completed her Bachelors in Civil Engineering but she found...
View all posts by Annie George >