Soccer Betting Analysis: How to Use Betting Agencies Odds to Predict Match Results?

As a soccer fan with 3 years of work experience as a live soccer match analyst, I have thousands of soccer game hours in my repertoire. I follow European soccer on a weekly basis and know most of the teams and players in the major leagues of Europe.

Even with all my knowledge and experience, when it comes to know how to use odds to predict soccer, I find it hard to predict soccer match results. Like in any other sport, the best team doesn't always win. There are many parameters that affect the outcomes of any given game. The skills of the players, the tactical formation, and teamwork may be the most important ones. But are meeting all these parameters enough to win all the games played? If so, we should be able to predict match results pretty easily.

The truth is, there are many more factors that affect soccer match results - team motivation and spirit, player injuries, fan support, chemistry between teammates and opponents, reputation, and win history are some of them. The complex interplay between these variables during the fast-paced activity of a game makes every match unique.

Professional betting agencies are making a lot of money from people who want to predict match results. It is safe to say that their betting odds are calculated in a way that maximizes their profits and minimizes their risks.

In this project, I wanted to examine the degree to which betting agencies' odds correlate with actual match results, and to see if there is any way to maximize prediction accuracy. For this, I looked at the betting agencies' reported odds for the basic 3-way bet (home team vs.  draw vs. away team) and the level of favored outcomes within each game (high favored, moderate favored, and low favored), and compared them to actual match outcomes to see if betting agencies' odds had any value. I further categorized the match outcomes by the location of the teams (i.e. hosting vs. visiting), the stage of the season, and the numerical difference between the payouts in order to find patterns that optimize prediction accuracy.

In the end, I found that there are three parameters can help predict the outcomes with up to 80% precision:

I used R shiny app and ggplot2 to visualize the data. You can find the full results on the app.

In most soccer competitions, draws may be the final result of the game, so there are 3 different outcomes to bet on between Team 1 and Team 2:

The odds are translated into payouts. The result with the minimum odd is the one that is most likely to happen, it has the least risk and therefore offers the lowest payout.

The result with the maximum odd is the one that is the least likely to happen, it has the higher risk and therefore offers highest payout.

For example, let's take the first match in this betting odds chart of the English Premier League and look at the odds for the full time result. In this game, Arsenal is playing against Crystal Palace. For an Arsenal win, any dollar you bet will give you $ 1.29 (a $0.29 profit). For a draw in the match, a dollar will give you $ 4.98 ($3.98 profit). And a Crystal Palace win will give a return of $ 8.06 ($7.06 profit) for a dollar bet.

The data sets were taken from Kaggle, a part of a soccer SQLite data base.

The European leagues are:

It is important to note that there was always consensus between the agencies regarding the probability for each outcome (i.e. they all thought Arsenal had the highest chance to win); the only difference was the magnitude of payout that they offered. Therefore, I considered the average consensus as a single entity.

For data processing I used RSQLite package for R to convert the different SQL tables to CSV files.

As part of the data cleaning and preparation, I deleted rows with missing values and ignored data from 2 betting agencies because their betting odds were uploaded to the SQL server as integers rather than exact numeric values. After this process there were 22,434 observations left.

Moreover, I added columns to the data set to include the match winners,  the agencies' average minimum, middle, and maximum payout, and agencies' favored result.

For the analysis, I defined the result with the minimum payout as the favored result by the betting agencies. The success rate shown in the charts is calculated as the number of times the favored result was the actual final result of the match, divided by the total matches played.

The favored result level column is a breakdown of the matches to 3 groups using the difference between the payouts (as extrapolations of the odds). My assumption for this calculated column is that the higher the difference between the payouts, the higher the chance for the minimum payout to be the winning outcome. Therefore, the groups are categorized in the following way: 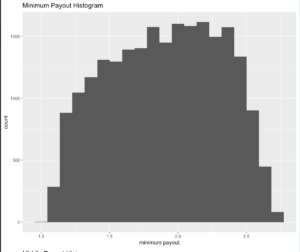 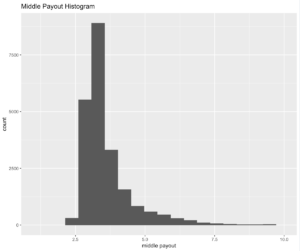 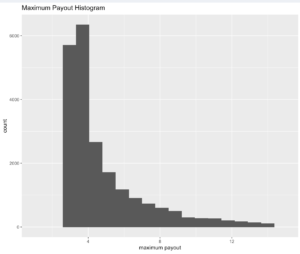 The minimum and maximum payouts are inversely related and the minimum and middle odds are also inversely related. This is explained by the fact that when there is a high favored result (for example, one team has a better track record than the other), its payout will be low and accordingly the other outcomes' payouts will be high. On the other hand, when there is no high favored result (for example, the teams playing have same skill level), the payouts will be quite similar.

This is a scatter plot of the minimum and maximum payouts of the matches observed: 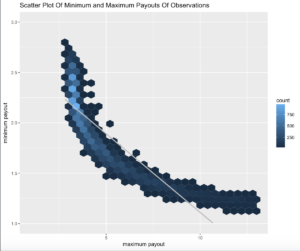 The first chart depicts actual match results. Here, we can see that the home teams wins 46% of the time, the away team wins 29% of the time, and there is a draw 25% of the time.

This chart raises an interesting question: why do the agencies never favor a draw result when this outcome occurs in at least 25% of the matches? I did not come across any data explaining how the agencies determine their payouts, however, I believe that agencies prefer to favor one team over the other because it's easier for them to promote the bet among gamblers. It's just more interesting to have a face-off.

Next, I wanted to check how accurate the favored result was in terms of predicting the match outcome. I found that the agencies' favored result (represented by the minimum payout) had an average success rate of 53%.  This was consistent for each of the seasons in the data frame. 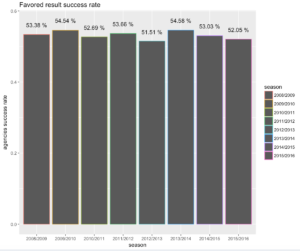 I also wanted to examine to what degree the location made a difference in the payouts given to favored teams. For instance, I would expect the payout for a favored home team to be lower than a favored away team. After all, it is widely believed that the home team has the higher advantage. I used two box plots, which demonstrated that there is almost no significant difference in the minimum payouts that can be attributed to location. 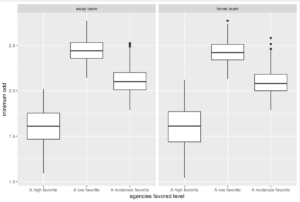 If the minimum payout for a favored home team and a favored visiting team are almost identical, does this mean that the rates of winning them are the same? 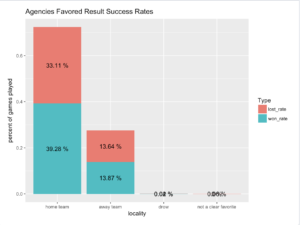 I wanted to further visualize the proportion of games that can be cataloged as high favored, moderate favored, and low favored odds. Because of the league structure, like number of games and arrangement of opposition, there are more games where the difference in team skills and strengths are large. Therefore, we see that almost 50% of the matches were categorized as high favored, and more than a quarter that is moderate favored. 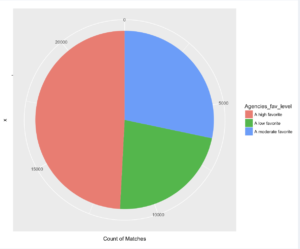 One of my more interesting findings was that the accuracy of the predicted wins increased during the later stages of the season. The late stages of the season carry higher stakes than the early stages, as this when the champion and the relegations are decided. In the chart below, we can see a slight improvement in the success rate over the span of a season.

Next, I checked the stage of the season against the location of the team as well as the favored level, and I found that the success rate increases over the span of a season when the high favored team plays in their home arena. It seems as if the high favored teams are capable of winning in the important stages of the season, while on the contrary, the low favored team success rate decreases over time, as if the pressure of the last stages of the season and the presence of their fans have a negative effect on their performance. 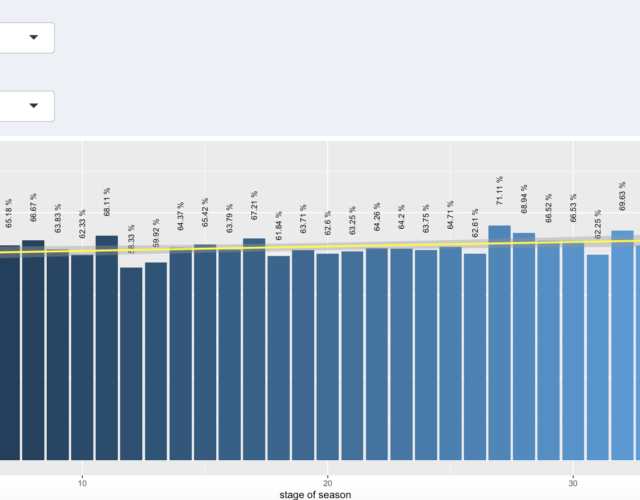 The results of the away team demonstrate a different trend. While the high favored teams' success rate increases over time, the low favored teams show inconsistent success rates throughout the season. It seems that there is no clear effect of the season stage on their performance.

Moreover, in my shiny app, you can explore the success rates broken down by the location and the favored level. When I did this, I found a clear pattern: matches with a high favored result have a success rate of around 65% and matches with a low favored result have a success rate that ranges from 33%-43%. Moreover, when cross-examining the data, I found that there were three parameters that carried the most weight when determining a probability of a match outcome:1) the agencies' high favored result 2) the location of the team (home vs. away), and 3) the stage of the season. Ultimately, choosing a high favored team in their home arena, in the late stages of a season can raise the probability of winning the bet by 80%.

View all posts by Chen Trilnik >

Emma Ward June 22, 2020
how to make soccer predictions by yourself?

Google October 6, 2019
Google Check below, are some absolutely unrelated web-sites to ours, nonetheless, they may be most trustworthy sources that we use.

Google September 16, 2019
Google The information mentioned within the article are a few of the very best offered.

fanatik April 19, 2018
I just like the helpful information you supply in your articles. I will bookmark your blog and take a look at again here frequently. I'm quite certain I will be told many new stuff proper right here! Best of luck for the next!