The American public understands very little about President Donald Trump’s finances. From refusing to release his tax returns during the 2016 presidential campaign, to wildly inflating his self-worth based on however he feels, it’s difficult to truly understand our president’s assets and interests. That is a danger to democracy. This danger has led journalists, researchers, and watchdog groups across the country to try and uncover as much as they can about the president’s financial history. One particular area of their interest is the payment by political organizations to Trump-owned businesses. Clearly, such entities spending money at properties and businesses owned by the president represents a conflict of interest. This would seemingly be why these organizations have fought tooth and nail in courts to make sure that these payments don’t leak to the public via reports or through Freedom of Information Act Requests.

The journalists at ProPublica have assembled one of the most complete datasets of such payments. They did an amazing job visualizing it in its totality. As a journalist myself, and as someone who is always on the lookout for new tools that can enhance my reporting, for my project, I wanted to create an app that would let me take a closer look at the data. 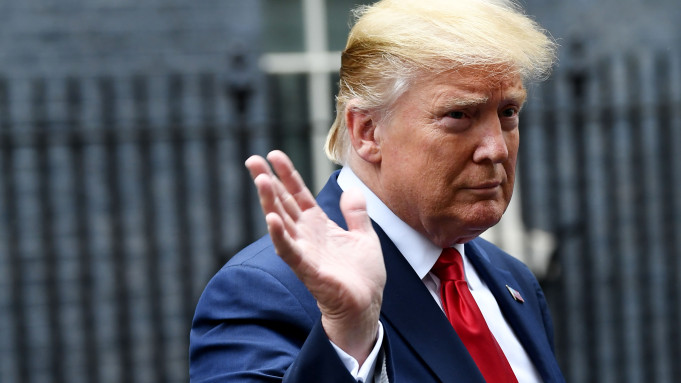 I’m very passionate about journalism. To that end, I’m also passionate about creating tools that make the lives of journalists easier, no matter their location or level of technical expertise. To that end, I wanted to make an application using a package in R called “Shiny”. I wanted the application’s user interface and data visualizations to be simple to understand and use. I structured my app in accordance with the five W’s: who, what, when, where, and why.

At the top of the sidebar of my application, I included a drop down menu where a user can select a political organization whose spending they want to examine. I also ask them to select a year in which the spending occurred. Underneath are three visualization tabs. One is devoted to displaying a chart of which Trump-owned organizations the political entity paid, one displays a chart for what purpose generally they were spending their money, and the final tab displays an interactive map and chart displaying where the organization was spending its money.

ProPublica’s data, found here, was very clean for the most part. The most relevant variables for my app were the date, location, purpose, who made the payment, and to whom the payment was made. I planned on adding an interactive map feature to the “Who” section of my application, so I went and found latitude and longitude data for each of the Trump-owned businesses who had been paid and added a variable there. I also added a solitary year variable for ease given that it would be referenced in one of my drop-down inputs on the sidebar of the app.

The issue with this data set is included right up front when downloading it from ProPublica’s website. It’s by no means a complete representation of the spending at Trump properties. According to ProPublica’s site, many government agencies are still fighting requests to disclose spending at Trump properties. The dataset continues to be updated as they receive more observations.

Obviously, the first thing I would like to do in the future is to continue to update the dataset based on what ProPublica is able to find. Next, while I had originally intended to keep the data visualizations simple so as not to confuse anyone who used the app, I would like to give the user the option for more visualizations if they do so choose.

And while I had initially passed over doing a summary spending page in favor of breaking the data down by spender and by year, it would probably help to give context to a user who isn’t as familiar with the overall spending as I am.

Finally, I’d like to plot the map in the “where” section of my app differently. The Google API key I initially used is now broken and displays strangely within the app. I’ll certainly need to either use plotly maps instead or call Alphabet and trying to sort something out.