The main objective of this study was to observe the demographics of obesity in the United States. Obesity remains an important issue because almost half of the world’s adult population could be overweight or obese by 2030 according to The Global Obesity Threat published by McKinsey&Company. Obesity is often related to health conditions such as heart disease, stroke, type 2 diabetes, certain types of cancer in addition to contributing to economic and productivity costs.

My main goal was to identify distinct segments with high obesity within the US population. Market segmentation could allow for more effective targeting of products and marketing campaign such as promotion of gym memberships, healthy eating programs, or healthcare discounts in order to move Americans towards healthier weights.

The datasets for analysis were obtained from Data.gov. The datasets include national and state specific data on youth and adults’ diet, physical activity, and weight status across years and throughout different demographics. Youth data were collected every two years from 2011 to 2015; and adult data were collected every year from 2011 to 2016. Please refer to my Shiny app (https://kellyho.shinyapps.io/ShinyProject/) for links to the raw datasets.

The below heat maps show the percent population on the selective input chosen by the user. The selective inputs include obesity, diet, and physical activity attributes for both youth and adult groups. Looking at the obesity data, the southern states have the highest obese population, whereas states that have a more active lifestyle, such as Colorado and Hawaii, have the lowest obesity rates.

The user can further explore the patterns of different diet and physical activity across the states with the heat map. Another way to investigate the correlation between obesity and the behavior factors is through scatter plots. 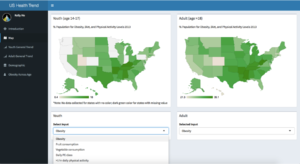 The below scatter plots show a general trend between obesity versus the different behavior attributes that are included in the heat map selection. The data points on each scatter plot represent a different state’s data over time.

For the age demographic, obesity tends to stay at the same level for youth group (age 14-17) but gradually increases in the young adult group (age 18-35) and reaches the highest from mid 40s to mid 50s.

For ethnicity demographic, obesity trends are similar among youth and adult groups. African American and Hispanic have higher obesity rates followed by Caucasian and Asian. But again, adults have a significantly higher obesity rate compared to the youth group.

Perhaps educational campaign on a healthy lifestyle should start at an earlier age. Weight loss products and health insurance plans could be personalized toward low education, low income, and even certain ethnic subgroups of the population.

The previous demographic data showed a unifying trend where adults have higher obesity rates compared to youth across all years. I was curious to see how obesity changes across age and if the change can be explained by the behavioral factors captured in the dataset.

I took a snap shot in time and picked the most up-to-date year to construct the box plots below. The data points represent each state’s data in 2015 – the median obese population sharply increases in the young adult group from age 18-35.

Fruit consumption has no obvious trends across age, and interestingly, vegetable consumption rises with age. This might seem to be a contradiction to the earlier trend observed for vegetable consumption, but it is not entirely because the earlier trend was constructed within individual groups of adult data and youth data respectively, whereas the comparison below is made across groups. The box plots below simply indicate that the diet parameters from the dataset cannot explain the sharp increase in obesity for the young adult group which I was interested in.

As for physical activity, different categories of physical activity are either similar or higher for the young adult group. This again indicates that physical activity may not be the main contributor to the significant increase in young adult obesity. Other factors such as high carbohydrate diet, sleeping patterns, stress levels, and changes in metabolism should be investigated.