A dish to die for?

You are exhausted from an intense day at work. You put one foot after the other, consuming all the energy left in reaching your destination. You finally get there and order your special. The dish arrives. Remembering how much you love that food you gobble what's in front of you. Once it's in your belly, you open your eyes, look around and realize you are the only one in your favorite restaurant. "But it's rush hour," you think to yourself. At that exact point a couple walks towards the door of the restaurant. You see them look at a paper stuck to the inside of the glass door. Their faces express concern and they walk away. You walk towards the door and see a big C staring back at you. At that point you realize the health inspector must have come around and was not impressed with what he saw. Your stomach bellows a howl. Oh-oh!

When you go out to eat, your top priority is to have good, clean food. For some odd reason, we always assume that every chef is like Monica from the famous sitcom Friends. Highly talented chef, super clean. Such a chef would pass the Department of Health and Mental Hygiene (DOHMH) score with flying colors. Unfortunately, that’s not the case for chefs in New York City restaurants.

Recently the DOHMH published violations, grades and scores of 8,444 restaurants in Manhattan, New York between 2012 and 2017. Clearly there are some places that carry higher risks than others. Before we poke our noses into who did what, it’s probably better to know some basics.

Every year the Health Department inspects 24,000 restaurants in Manhattan for City and State food safety regulations. As a result, each restaurant is given a score. A score between 0 to 13 points earns an A, 14 to 27 receives a B and those with more than 28 get a C. The lower the score the better. The scores are summed up based on the type of violation. You can read more about the different type of violations here. A health inspector can inspect a restaurant at least once and would inspect again if the restaurant has violated some critical violations.

The DOHMH dataset was downloaded from NYC data center. It contains 167,777 rows and 15 columns. The columns contains information about

With such a data at our hands what can we possibly find out?

With such a huge data set we could get answers to the following questions:

Which cuisines had the highest violation?

The following are the top 20 cuisines (out of 81 in the data set) that had the highest frequency of violations. 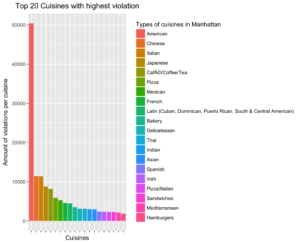 Fig.1 The barplot above shows the highest frequencies of health violation by cuisine type.

The graph in Fig. 1 shows that American cuisines had the highest number of violations out of 81 cuisines in Manhattan.

Were there any actions taken for severe violations? 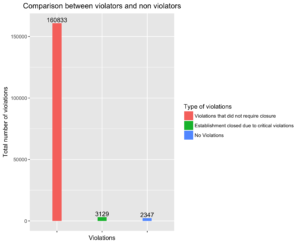 Fig 2: Comparison between the total number of violators and non-violator.

What were those violations?

The dataset included 93 types of violations. The top 10 are graphed below. 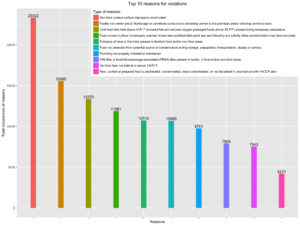 How many of the violations were critical? 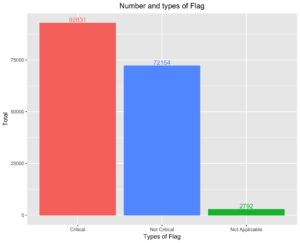 Fig 4: The amount of critical, not critical flags.

There was a total of 92,831 critical violations. This was irrespective of the grade that was awarded.

How many restaurants were awarded a grade? Which grade was awarded the most? 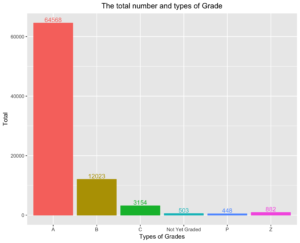 Fig 5: Types of grade and how many were awarded.

Turns out A! According to the Fig. 5 we can see that overall a lot of restaurants performed better and got good grades. The grading system works! Fig.6 below show how many grades were awarded each year.

Fig. 6 The bar chart shows the grades awarded each year.

When we compare Fig. 4, Fig. 5 and Fig.6 we can notice a strange incidence. If many restaurants were given an A grade then why are there so many critical flags?

The evidence suggests that despite a restaurant getting a better grade, they still might have severe violations. However, the important objective to note is that the total number of violations are far fewer in number.

A tale of two case studies

Let’s get an accurate estimate of how to judge a restaurant. For this case study let’s look at two restaurants, La Grenouille and Dishes.

La Grenouille is an A grade restaurant. But do they have any skeletons in their closet? 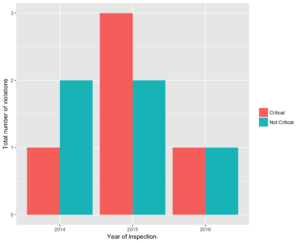 Fig. 7 The graph shows the number of violations that La Grenouille violated each year. La Grenouille’s worst year was 2015 with a total of 5 violations (3 critical and 2 noncritical). 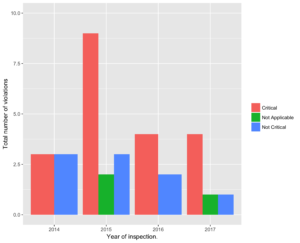 The graph in Fig. 8 shows that Dishes had had a lot of critical violations, and it hasn’t changed much for the preset year as well. Therefore, the grade has changed, moving between A, B and C (Fig.9). 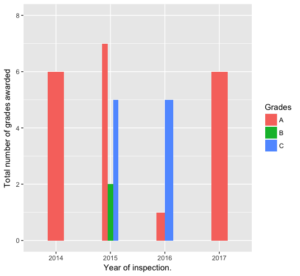 Comparing both Fig.7 and Fig.8, we can conclude that as long as critical and non critical violations are under 14 points, a restaurant will be awarded an A grade.

You don't have to cancel your dinner plans