Contributed by Le Wei. He is currently in the NYC Data Science Academy 12 weeks full time Data Science Bootcamp programs taking place from July 5th to September 23th. This post is based on the first Class project-R visualization

The Premier League is an English professional league for men's association football clubs. At the top of the English football league system, it is the country's primary football competition. Contested by 20 clubs, it operates on a system of promotion and relegation with the English Football League.

The original data is England Premiere league season 13-14. The original data includes the team names, home or guest games, match score for each round. I adapted the original table and created a new table including the total score and loss for every team in this league, total points each team got in the entire season, home performance and guest performance and the standings for each team. Also from the data I calculated which team perform better in the second half performance. 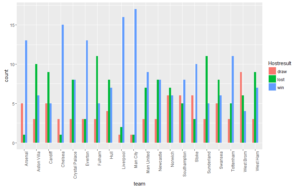 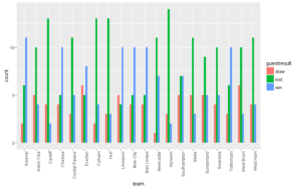 From above, it is easy to see both the performance as home team and gust team. The strong teams like Man City, Liverpool, Arsenal and Chelsea had strong performance in both home game and guest game. The other good team, for example like Tottenham hot spurs and Manchester United, even though their guest winning game numbers are almost as same as the other strong team, but it is easy to see as a home team, their performance are not as good as Man City, Liverpool, Chelsea and Arsenal, which could be the reason Tottenham and Manchester United are not in the first tier teams in England Premier League. 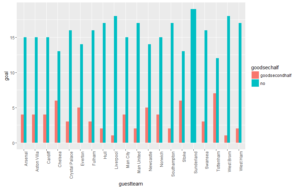 In this graph, I defined good second half team as the teams with tied up score or fall behind their opponent when first half ends, and win the game finally. The data shows those teams must have strong attack ability during the second half. As we can see, Fulham, as one of the worst teams, has the most second half performance games among all teams. 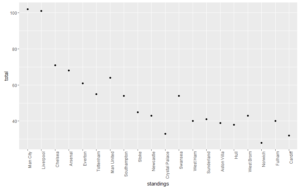 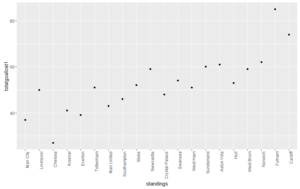 The analysis part 3 focuses on total goal scored and total goal lost for each team in the entire season. The x axis is arranged by the team standing top to bottom from left to right. As we can see from first graph, generally, the graph forms a decreasing line which means the weaker the team, the less goal they scored. Although some points are up and down for instance, Crystal Palace, as a mid-level team, surprisingly the score number is extremely low, so what keeps this team from stepping into the relegation zone.

Let’s move to the second graph which is the total goal lost for each team. The x axis also shows the team standings top to bottom from left to right. As we can see, the graph generally form an increasing line which means the weaker team, the more goals they lost. From this goal loss graph, we can see Crystal palace has very good defense. Their team goal loss is way less than those relegation zone team, which explained why this team ends up the whole season with a relative good standings.

Now let’s see why Chelsea, one of the top teams, ended up the season as third place but not the first place even though they have the least goal lost in the entire season. Let’s move to the total goal score graph. Compare to other strong teams like Manchester City, and Liverpool, Chelsea scored much less than these two teams. So maybe lack of attacking ability is one of the reasons Chelsea end up the third place but not the first place in in this season