Three-point field goals have transformed the landscape of the NBA.  Data shows teams are launching more three-pointers than ever and with the 2017-18 season bringing in new highs in television ratings, attendance, merchandise sales, franchise valuations, and player salaries, it makes sense now more than ever to evaluate the efficacy of this strategy.

To evaluate how the NBA has changed over the years, I made use of Scrapy, a web scraping framework written in Python to extract data from sports-reference.com.  The final dataset included data by team and season from the 1946-47 season up through and including the 2017-18 season. 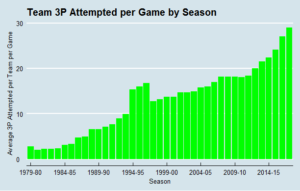 We see a very similar trend with three-point field goals made over this same time frame. 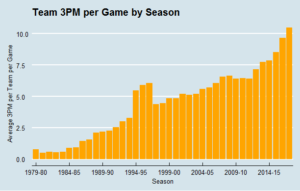 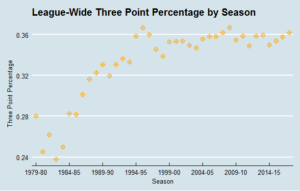 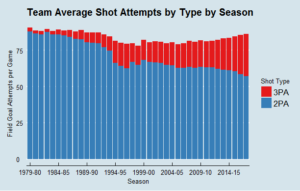 A high profile individual example is Stephen Curry, who has broken his own record for three-point field goals made several times in the past few seasons.  He has had tremendous individual and team success (2x NBA MVP, 3x NBA Champion) and was rewarded with a record-setting 5yr/$201M contract.

One team in particular that has particularly embraced this shift in ideology is the Houston Rockets.  2017-18 saw the Rockets win a league-best 65 games and their most prominent player, James Harden, was awarded the league's MVP award after making 265 three-point field goals in only 72 games played. 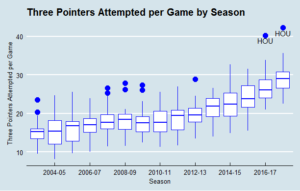 A two-sample t-test allows us to conclude that there is a statistically significant difference in mean winning percentage for teams that launch an above median number of three-point field goal attempts as compared to those below the median.  Interestingly, however, these teams do not make a statistically significantly higher percentage of these three-point field goal attempts (Group Above Median: 35.6% vs. Group Below Median: 35.4%).

Fascinatingly, it does appear that teams gain an additional advantage when merely attempting three-pointers at a higher rate.  Teams that shoot an above median number of three-pointers convert two-point field goals at a statistically significantly higher rate.

Further analysis would be necessary to validate this claim, but intuitively, it may be the case that teams that attempt three-pointers at a higher rate, while not necessarily converting three-point attempts at a higher rate, draw defenses farther from the basket.  It's possible that this "spacing out" of the defense contributes to higher-percentage two-point field goal attempts.

Additional hypothesis testing allows us to either verify or debunk additional claims:

Further analysis in this space could involve player level analysis (namely group level interaction).  A comprehensive evaluation of "tanking" in the NBA also has the potential to yield interesting results.