This serves as the next phase in building my NFL Draft Outcome Prediction Tool. Previously I collected data of 30 years of NFL Draft History and resulting player outcomes. Scraping college football statistics for those players provides more potential predictor variables for NFL Draft Outcomes. The difficult part is data is not available for all positions and some positions do not have as many years of historical statistics available (Source of statistics: http://www.sports-reference.com/cfb/). So the scope of the scraping effort was QB, RB, FB, WR, TE (1980-2017); K, P (1990 to 2017). Here are some of the key findings from my tool:

·       High but not record high College QB Ratings led to the most successful NFL QBs, Every QB

·       No strong correlation between College Passing Yards and NFL Success

·       No strong correlation between College Interceptions and Success

·       No correlation between College Rushing Yards and Success, but poor Avg. Yards Per Rush does correlate with poor NFL success 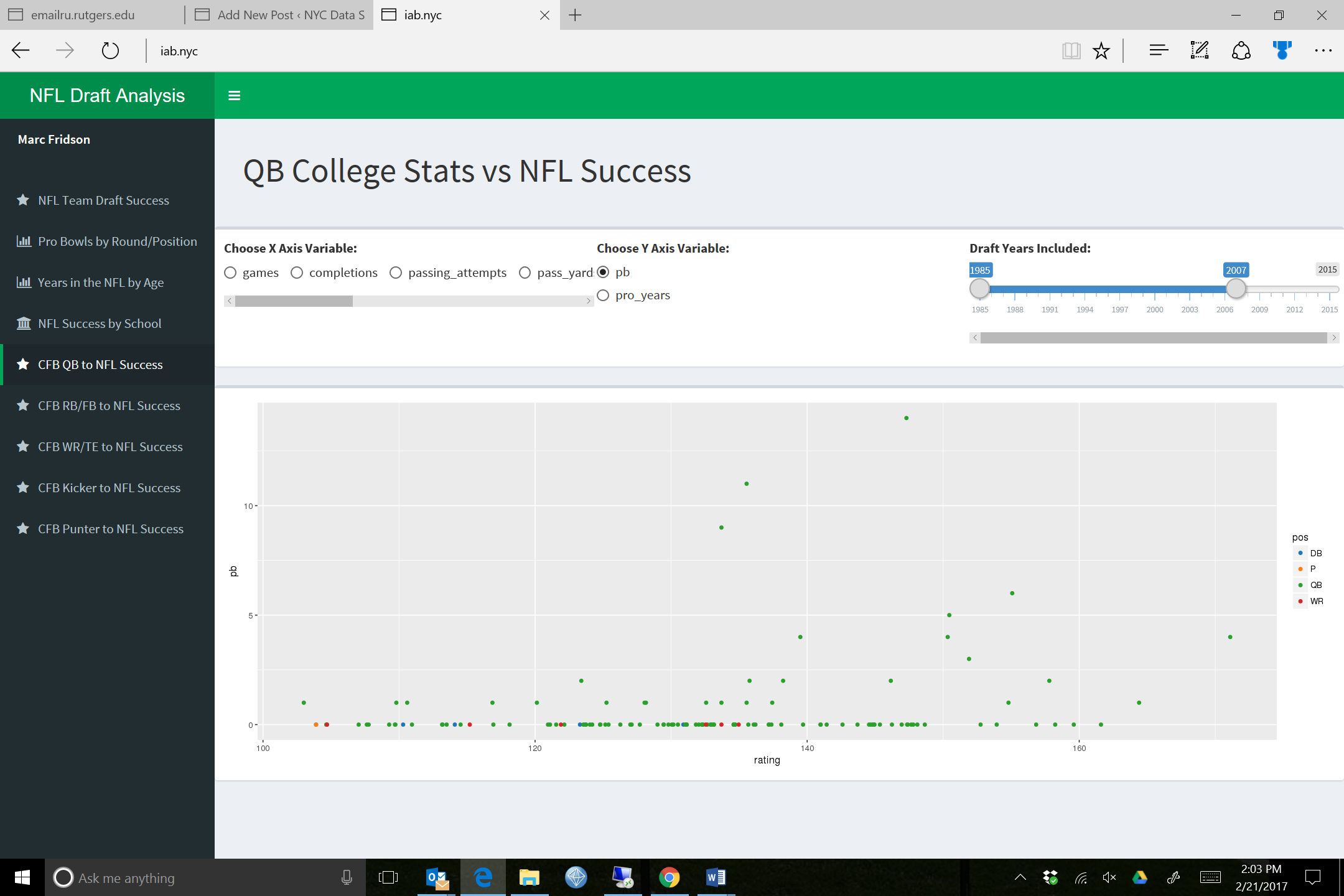 ·       Rushing TDs do not correlate with NFL success

·       No correlation between receptions and success 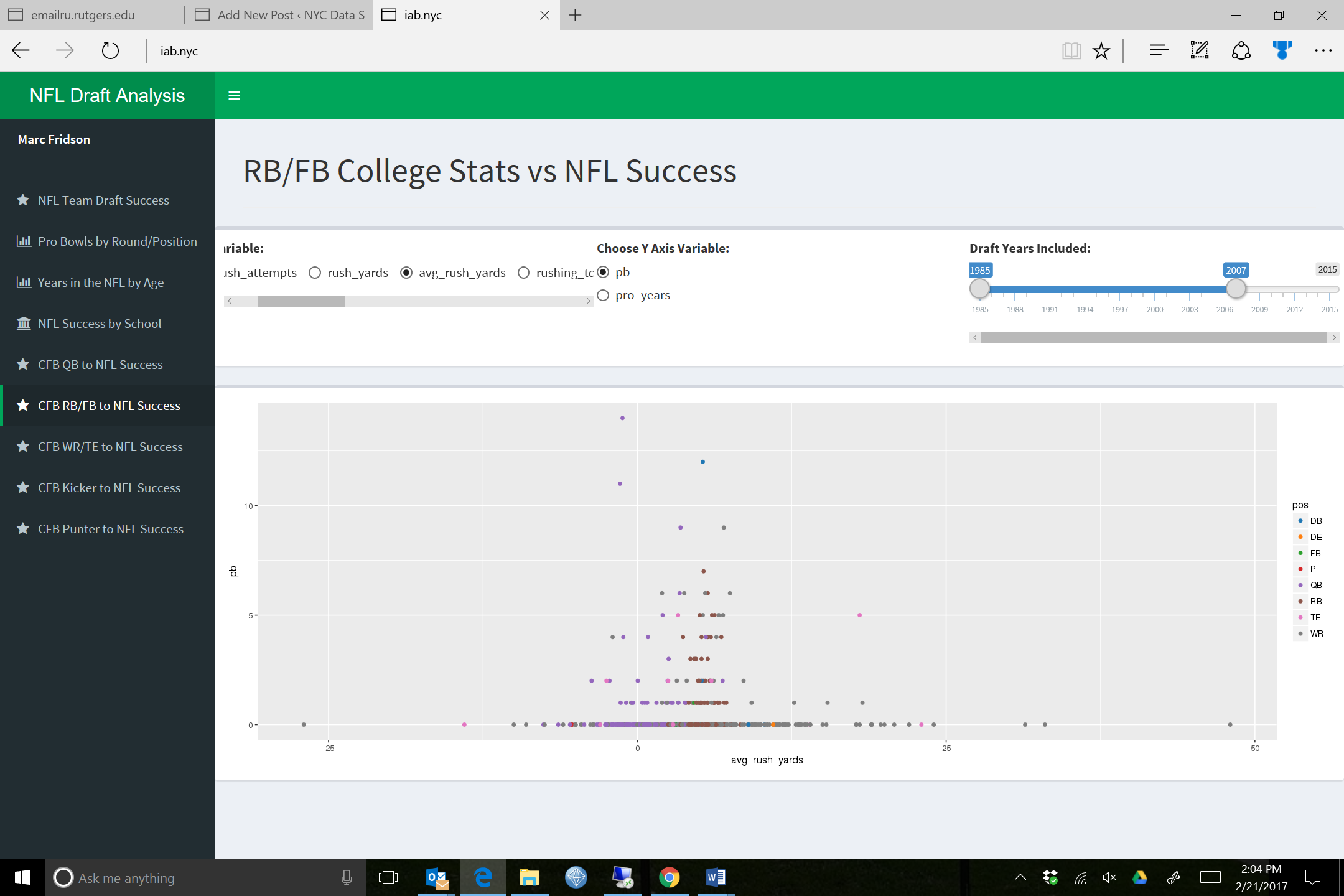 ·       No correlation between scrimmage yards/plays and NFL success 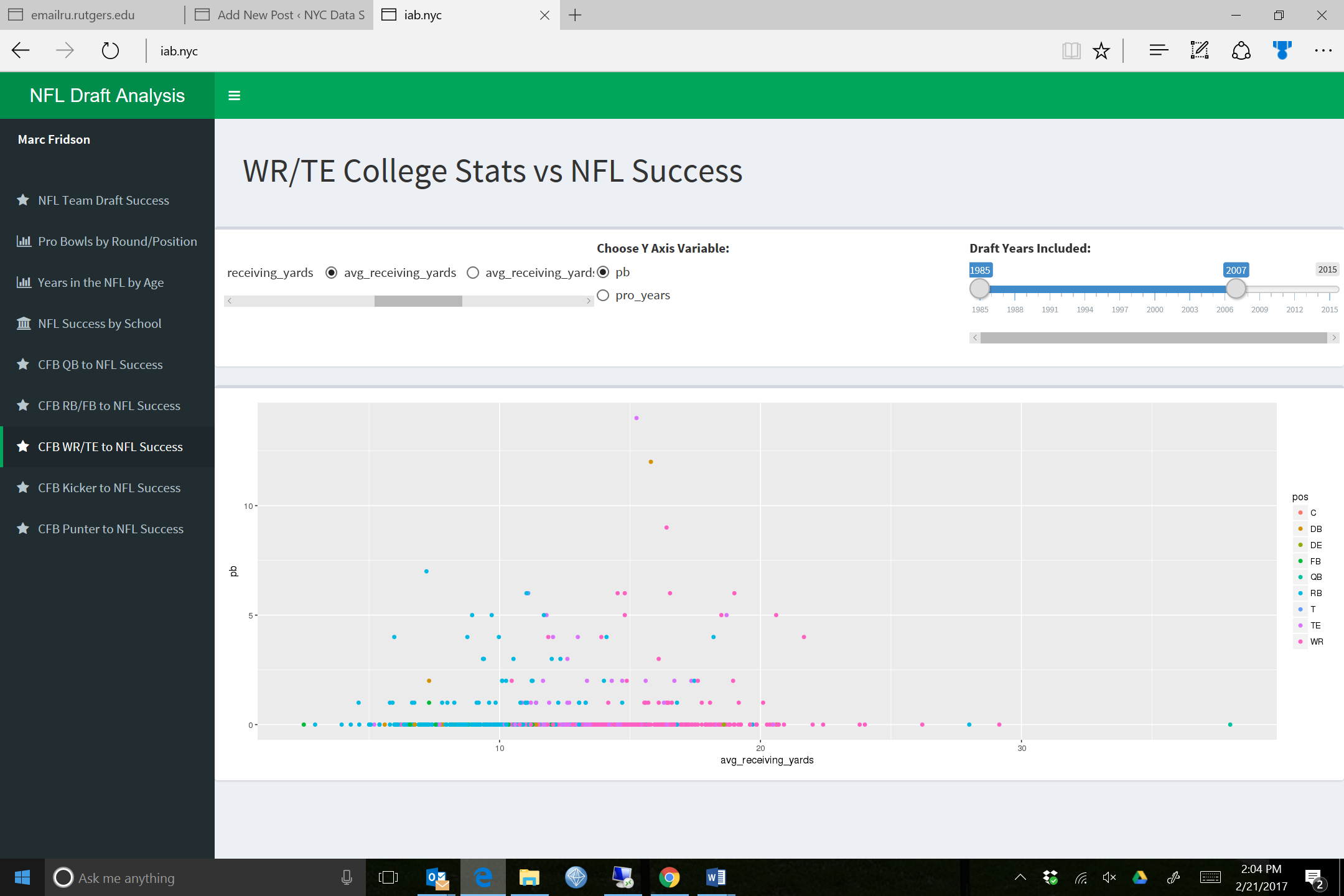 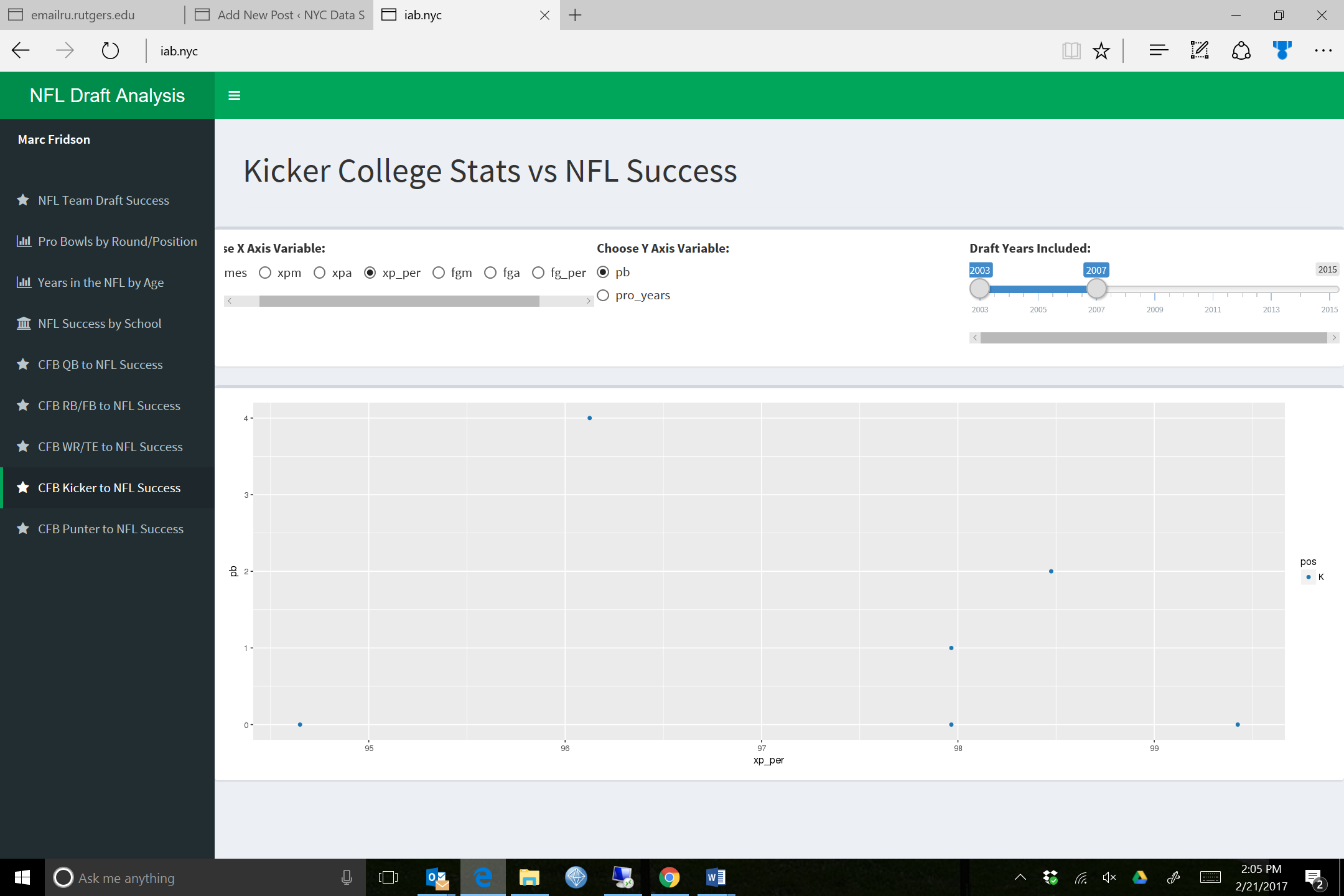 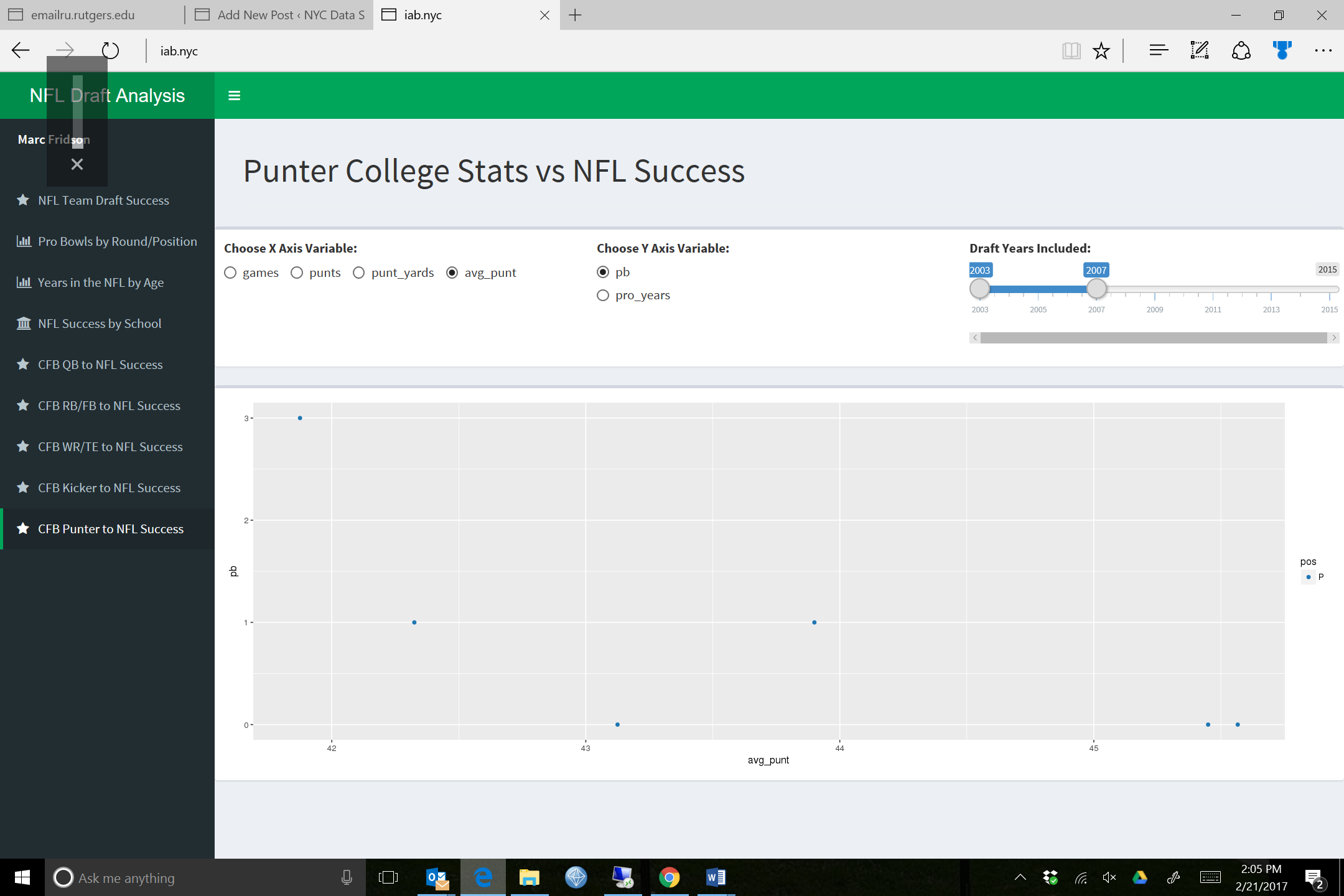 Google December 11, 2019
Google That may be the end of this post. Right here you will uncover some web-sites that we consider you will value, just click the hyperlinks.

Timothy July 29, 2017
Thanks to the terrific guide

Www.Denverlinux.com July 29, 2017
Thanks, it's very informative

mobilemenorah.com July 25, 2017
This is truly useful, thanks.

Nate July 22, 2017
Thanks for the wonderful manual

www.Denverlinux.Com July 20, 2017
Thanks to the great guide

http://www.mobilemenorah.com/ July 20, 2017
I spent a great deal of time to find something like this

http://Www.denverlinux.com July 14, 2017
I spent a lot of time to find something such as this

Www.Gipsonwvl.Com July 14, 2017
Thanks for the terrific article

www.denverlinux.com July 14, 2017
This is really helpful, thanks.

Cortez July 14, 2017
I spent a great deal of time to locate something such as this