Data Study on US Annual Payroll

How have annual payroll payments in United States evolved during the past ten years and are there any data trends? Do geographic factors have an impact on their distribution? These are the questions I hope to address in this project.
In this study,  we investigate the distribution of US payroll payment from 2005 to 2014 and explore the evolution of business patterns over this period.
The data used in the study is published by US Census Bureau from the link:
http://factfinder.census.gov/faces/tableservices/jsf/pages/productview.xhtml?pid=BP_2014_00A1&prodType=table

It contains the following information which we focus on:

Due to missing data, the following industries are ignored mostly in the study:

Design of the Study

This study was performed through R visualization.

Data Results of the Study

The following plots show the US payroll total annual payment, total employees paid and average annual pay over the period. 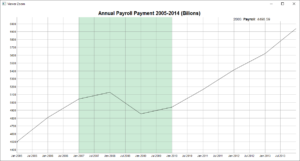 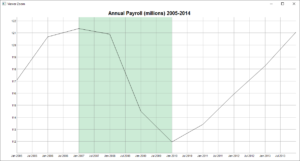 The Shading area shows the payroll behavior during the financial crisis and gave us some insight about the business pattern during that time.

Let's take three important periods and see how the average annual pay across industries evolved on states level. The following plots shows the distribution in 2007, 2009 and 2014, which are before, during and after financial crisis: 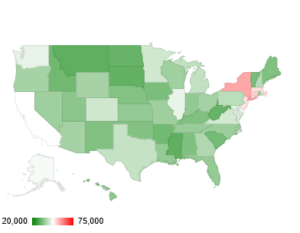 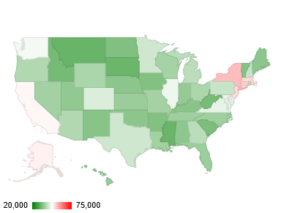 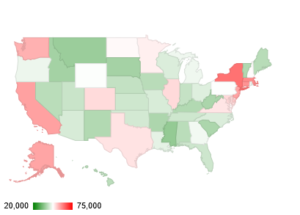 The boxplots show the distribution and development of annual average pay across the United States. They indicate that it increased more from the year 2009 compared with from 2007 to 2009. And they also shows that different states do have different annual average pay and this difference is sizable for some states.

Here is another point of view regarding the distribution of annual average pay we discussed above: 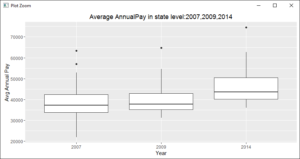 Overall, the plot above shows most of the states get recovered from year 2009.

Then let's continue to look at the variation of annual average pay across United States over those three years. 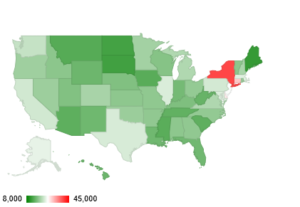 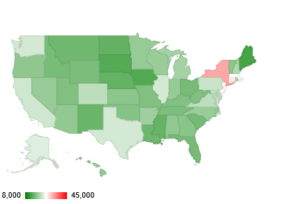 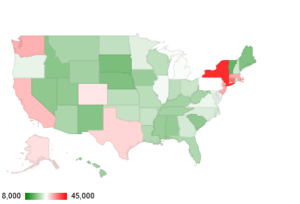 Next, we investigate the annual average pay in different industries and collect the top three and bottom three performers each year for the ten year period. Here are the results we get: 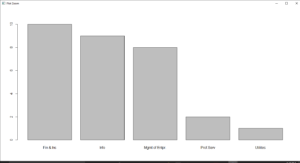 The plot above shows that Finance & Insurance, information and management of Enterprise were the top three performers during the period. And we also compare the annual average pay between top and bottom industries as the following: 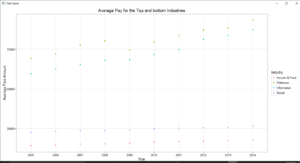 This graph indicates the gap between the top and bottom ones has been increased over years and it appears this trend is going to stay in the near future. 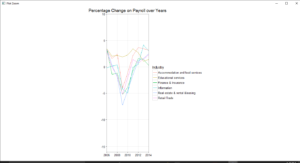 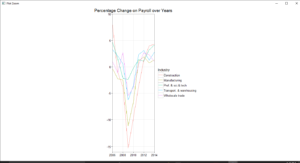 It seems that the plots show construction got the biggest hit during financial crisis, and although it seems every industries' employment recovers somewhat after 2009, it does not show those top performing industries have larger increases in the rate of employment.

Based on the study above, the following information is shown:
US payroll aggregate payments have been increasing over the years since 2009. We do see the recession had the most serious impact on total payroll number but less impact on average pay nation wide.
The Northeast and West Coast are the regions with the biggest pay increases over years compared with the Central region and they also have larger pay variance across industries within each state.
Finance, insurance and information are the top average paid sectors across the United states. Retail, Accommodation and Food are the poorest in term of the average paid. The top performers increase the average paid more quickly than those bottom ones. And the trend shows no sign of stopping to in the near future.
After the Financial Crisis in 2009, the payroll has been recovering over past years and return to pre-crisis levels in 2014. However, the top paid industries did not generate the top employment over the recover period.