Living in New York City for more than two years now, I always enjoy the various, delicious cuisines the city has to offer. One thing I always notice every time I enter a restaurant is the safety grade in huge letters on the window of the restaurant. The grading sure helps me filter out a lot of restaurants. So as an aspiring data scientist, I decided to look into the safety inspection system and see if I could find any interesting factors that influence the grading.

The inspection data was obtained from the NYC Open Data library. Two features that jumped out immediately were the borough location of the restaurant and its cuisine type. This will be the starting point for my EDA.

The raw dataset was composed of over 440 thousand of inspection observations with 18 different factors/features. The following tasks were performed for the initial data cleaning:

- Removal of the nonsensical observations, such as blank restaurant names, absurd dates, etc

- Changing of the categorical variables into factors for visualization

After the data was cleaned, some preprocess manipulations were done for ease of analysis

- Due to the NYC Health Department grading process, not every restaurant receives a grade after an inspection; some will only receive a violation score. For this analysis, I converted the score to its respective grade.

- The raw data separates the restaurants into 85 different types of cuisine. I reduced and renamed the initial 85 categories of cuisine to 24 categories for ease of visualization

One feature that was very important was the location of the restaurant, so I decided to visualize the number of restaurants by borough and their respective grades. 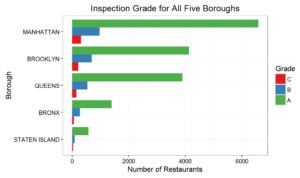 - Manhattan has the most restaurants of all five boroughs

- Grade A was is the most frequent rating in all boroughs

The second prominent feature related to the inspection grade is the type of cuisine. So I visualized the relationship between the cuisine type and the respective grades. 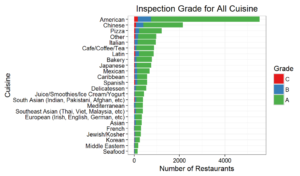 - The grade distribution for the cuisine type is similar to the grade vs location plot, where the majority of restaurants receive grade A.

- The bar plot also displays the fact that American cuisine is the most common in NYC, followed Chinese and Pizza. 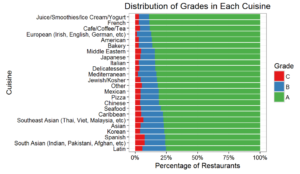 - Juices/Smoothies/Ice Cream/Yogurt shops show the highest percentage of grade A scores, followed by French restaurants and then Cafe/Coffee/Tea shops. 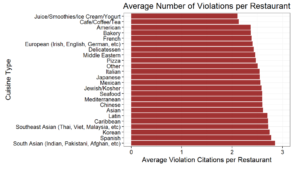 - South Asian cuisines received the highest number of citations per restaurant. It had the second  lowest grade A percentage in the previous plot.

Furthermore, I would like to see this distributions across each individual borough, so I plotted a facet plot containing all five boroughs. 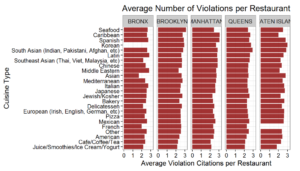 - The plots shown similar distributions across all five boroughs.

The last aspect I wanted to explore was the violation score. It is important because it directly derives the inspection grade. I plotted the density of the average violation scores per restaurant, separated by the five boroughs. 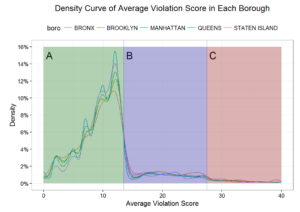 - The distributions are very similar across all boroughs.

- The highest peak occurs at the lower range of grade A, meaning that most grade A restaurants received a score in this range. This shows that although every restaurant wants to get an A grade, most of them exert the least effort to get and maintain it.

Heatmap of Violation Score by Cuisine Type and Location 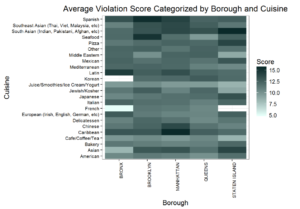 - The heatmap shows similar relationship as the facet map earlier, as it also shows the absence of Korean cuisine in Bronx and French cuisine in Staten Island.

To get a better idea of how the restaurant violation score spread throughout NYC, I plotted a choropleth based on the zipcode of each restaurant. 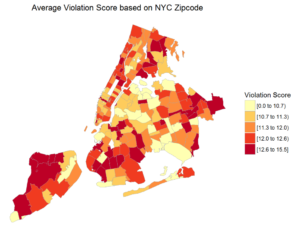 - There is definitely a relationship between restaurant location, cuisine type, and the inspection grade. But statistical testing is needed to observe any significance between the factors.

- The location can be further divided by neighborhood for detailed examination of restaurants surrounding.

Raviteja November 4, 2016
Can you let me know how the violation score is calculated