Following the Flow of FDI

Policymakers around the globe look to foreign direct investment as a leading indicator of a nation's economic strength.  FDI can be used as an engine for growth in developing / transitioning countries and can also signal a mature economy with diversified, global holdings.  In addition, tracking FDI provides insight into popular tax planning strategies shared by investors around the world.  The application that I've built allows a user to visualize these trends and flag them for further research.  As an example, the below chart displays the density of the nearly $400B (USD) in outflows from the United States in 2016. 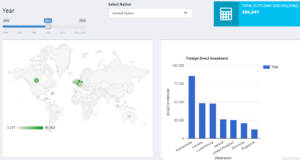 The dataset used to produce the application comes from the Organization for Economic Co-operation and Development (OECD) and contains self-reported bilateral FDI flows for the 36 member countries between 2005 and 2016.  The OECD defines a foreign direct investor as an individual, an incorporated or unincorporated public or private enterprise, or a government.  An FDI relationship is formed when a foreign direct investor acquires 10% or more of the voting power in a business enterprise in another country.  Common examples include M&A, building new facilities, reinvesting profits, and loans.

While there are several nations in the Top 20 of GDP not included in the OECD (China, India, Brazil, Russia, Indonesia,  and Saudi Arabia), the OECD does account for roughly 60% of global GDP.

As an example, the most blatant anomaly that a user is likely to identify is the Netherlands.  As a nation ranking 17th in GDP, it is curious to see the Dutch ranked 2nd overall in total inflows for the dataset at ~$234B.  Further research would lead the user to identify Netherlands as a tax-friendly environment for investors (no local income tax, no tax on interest or royalties).

As a second example, a user is able to identify the Philippines as the recipient of nearly $3.2B in FDI inflows in 2016, with Japan as the leading contributor.  Further research reveals that the Philippines has invested heavily in infrastructure, wooing previously skittish investors as a result.  The user will see that FDI inflows to the Philippines in the dataset has increased from roughly $30M USD in 2009 to well over $3B USD in 2016. 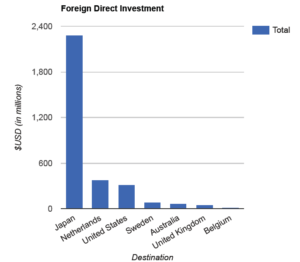 The next logical step to take with this application would be to seek out a more inclusive dataset.  There are ample opportunities for data storytelling with FDI amongst nations that are not currently OECD members (see China's "Belt and Road Initiative").

A more detailed analysis also has potential to yield interesting results.  For example, a user may derive value from obtaining more detail on which sector inflows and outflows are heading into or leading out from.

A refreshed analysis in 5-10 years time also has the potential to demonstrate what effect shifts in U.S. economic policy under a new administration have on U.S. foreign direct investment.

To view the application yourself, simply click on the following link:  https://tdeegan.shinyapps.io/FDIapp/

The author can be reached at [email protected]