What are the chances Earth is impacted by a meteor?

If a meteor does hit Earth, how much damage would it cause?

The meteor application I created attempts to answer these questions as well as provide background information on solar system objects.

There are over 700,000 asteroids and comets that have been observed in our solar system. All key information about these objects has been stored by the Jet Propulsion Laboratory (JPL) in their small-body database.

Two parameters are generally used to classify these objects:

Since the small-body database contains the class information about each object, the potential threat of each class can be assessed by charting the mean and median semi-major axis and perihelion distance. More specifically, an object makes a close approach when the fly-by distance from Earth is less than 0.05 AU (4.6 million miles) and is considered hazardous when the diameter is larger than 330 ft. Out of twenty classes, only four are potentially dangerous, as pictured below (colors) crossing the Earth (inner) and Mars (outer) orbits. 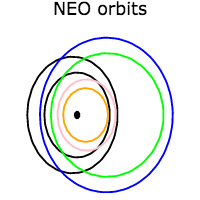 More specific information about hazardous objects is contained in another source: the Sentry - Earth impact monitoring database. This database contains information on object velocity and diameter which will be used to assess potential damage.

For the curious, the small-body database serves as a great demonstration of Kepler's third law. This relation between semi-major axis and orbital period served in part as a basis for Newton's work on gravity. 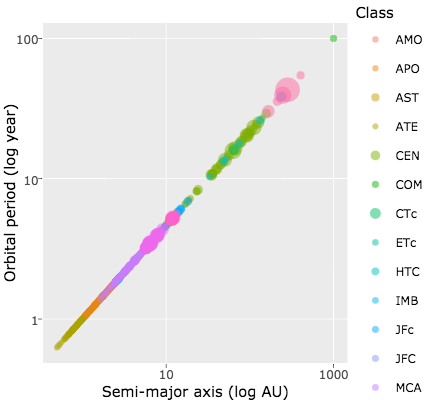 For example, the Jupiter Trojan objects are described as hovering around Jupiter's Lagrangian points with semi-major axes around 5.2 AU (according to Wikipedia). By selecting the TJN class in the application, the following semi-major axis (left), perihelion distance (center) and diameter (right) plots are produced: 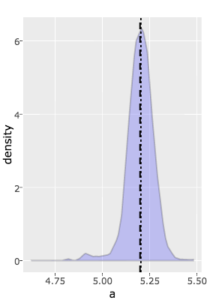 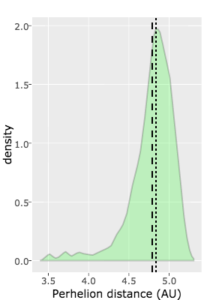 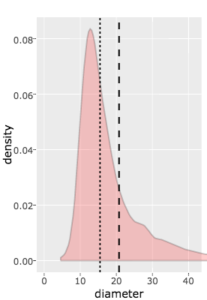 For reference, the dashed lines indicate mean of the distribution while the dotted lines indicate the median of the distribution. Using the mean values, we can plot the average expected orbit for each class to understand approximately where these objects travel on a macro level. For the TJN class (black), the following image is produced with Jupiter (purple), Mars (red) and Earth (blue) orbits are plotted for reference. We see that these objects are outside of the asteroid belt and are extremely far away from Earth, hence not dangerous in the least. 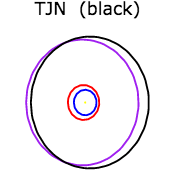 In contrast, the following semi-major axis (left), perihelion distance (center) and diameter (right) plots are produced for Aten class objects which are potentially dangerous, but much smaller in diameter: 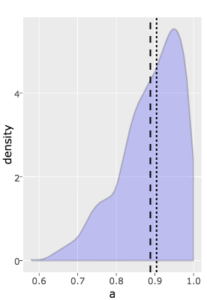 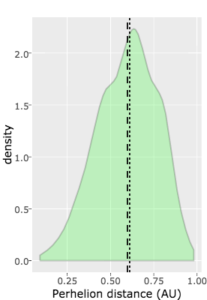 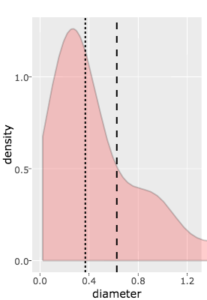 Charting these orbital parameters in terms of mean orbits produces the image below. No wonder that these are hazardous, their average orbit crosses Earth's orbit! 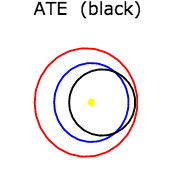 With an understanding of which objects are potentially hazardous asteroids (PHA), we can turn to objects which have a non-zero probability of impacting Earth. The distributions of these objects are plotted below: 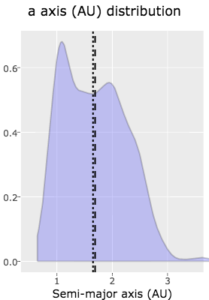 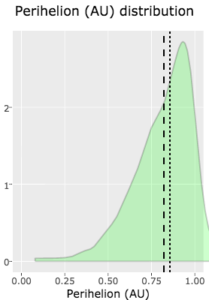 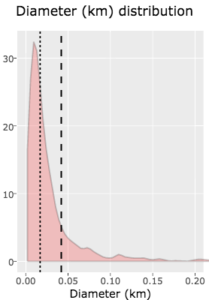 Of main interest is the diameter distribution since the size of the meteor is proportional to the damage it will cause (assuming that the object densities are similar). The median of this distribution is roughly 60 feet while the mean is roughly 130 feet.

In astronomical terms, these objects are tiny. How much damage would one of these median-size objects cause? Using the search feature in the datatable tab of the potential impacts page, we can locate an example asteroid: 2009 BE. 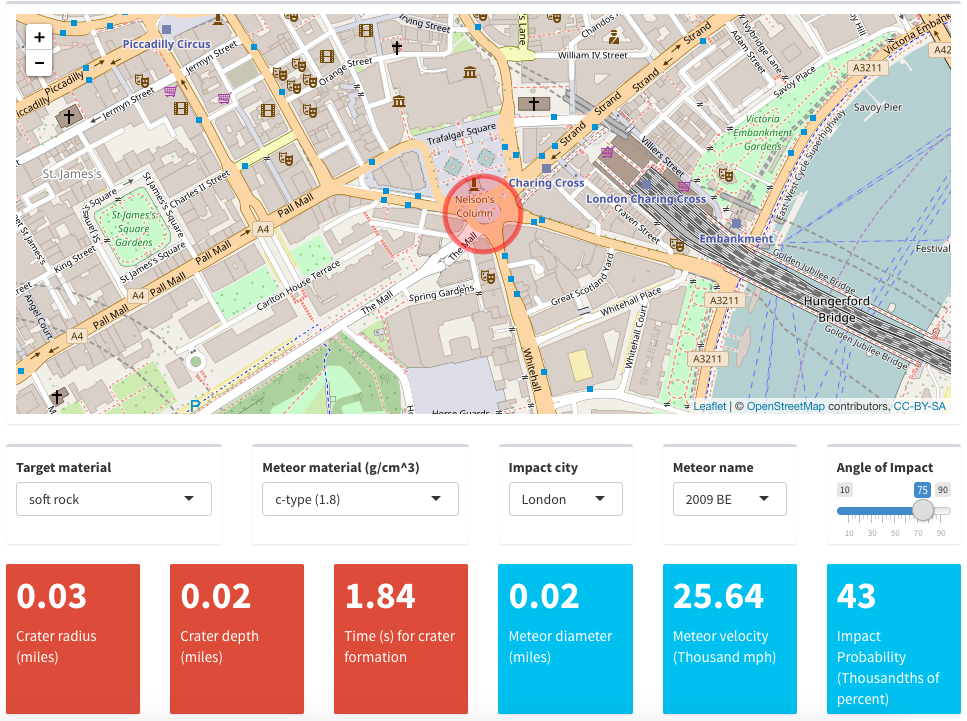 The crater application takes in a meteor, target and meteor material information, impact city (visualization only) and angle of impact to determine key figures such as crater radius, depth and time for formation while displaying key statistics about the meteor itself. For 2009 BE, we see that there is a relatively high impact probability of 43 thousandths of a percent though the resulting crater would only be 300 feet wide and 200 feet deep.

For a much less likely less scenario, let's see what happens if the largest PHA hits earth: 2010 AU118. 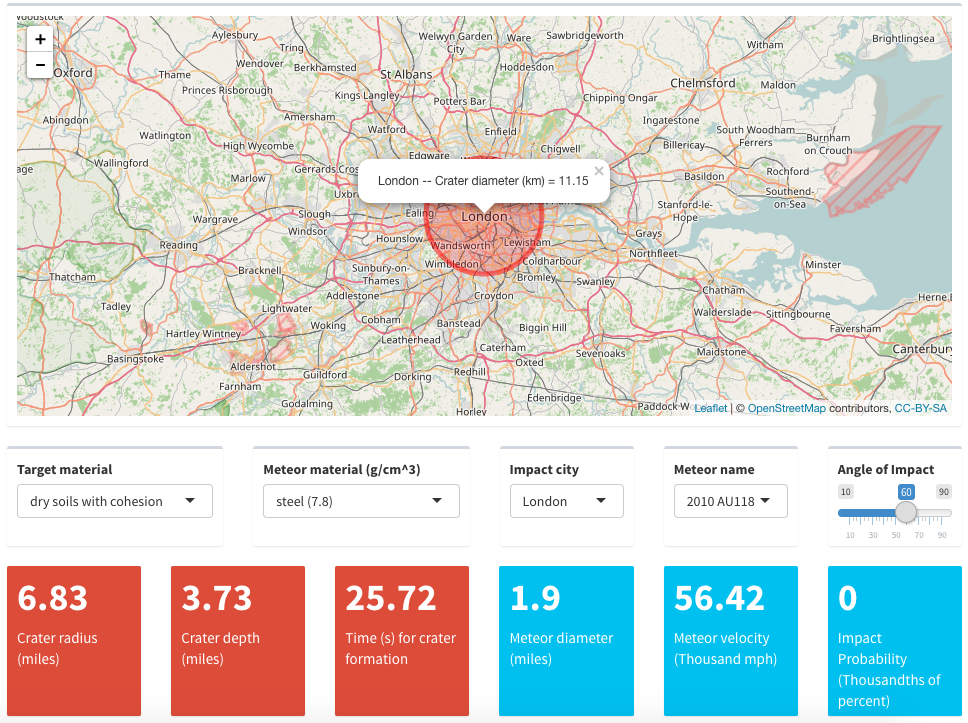 We see that the crater will be two orders of magnitude larger and thus the destruction would likely be devastating. Not included in this calculation are the other effects that a meteor would cause such as pressure wave generation and large scale dust generation and corresponding climate change. Given more time, this application could be updated to include more disaster-related calculations in addition to the crater generation figures.

So how likely is it that some massive meteor impacts Earth? The hope is that there is a negative correlation between impact probability and diameter. This plot is shown below (both on log scales) and while there is a general trend, there is a large spread about the least squares regression line with some notable outliers in high probability and large diameter.

While this is not comforting, the following statistics should be:

In conclusion, there is very little to worry about regarding meteor impact especially considering the small fraction of the world that has significant population density. In the future, an estimation of the probability of a meteor impacting a populated area will be included.

The relevant equations and coefficients for the crater formation problem can be found in the following paper:

Google October 17, 2019
Google Here are some links to sites that we link to for the reason that we feel they are really worth visiting.

Google September 26, 2019
Google The data talked about in the post are a few of the top out there.

Louvenia July 14, 2017
This is a matter close to my heart cheers. Thanks