All the recipes: Scraping the top 20 recipes of allrecipes

Contributed by Yannick Kimmel. He  is currently in the NYC Data Science Academy 12 week full time Data Science Bootcamp program taking place between April 11th to July 1st, 2016. This post is based on his third class project - Web scraping (due on the 6th week of the program).

The internet is a great resource for chiefs and aspiring cooks alike. There are a plethora of cooking videos

and recipes. A website that often comes up is allrecipes.com. This is not surprising as allrecipes is the most popular recipe website (source), and has been around since 1997.  Allrecipes is a go to source for the average American. Every year allrecipes releases the top 20 most popular recipes of that year in which is known as the hall of fame recipes.  For my web scraping project, I thought this list would give me insights in food trends in the USA over the last 20 years. Code for the project can be found here.

Shown below is a screen shot of the overall list of hall of fame recipes by year (page).

(AJAX) code, which makes it difficult to use traditional xpath methods like BeautifulSoup and Scrapy. Therefore, I chose to use Selenium package in Python to scrape allrecipes, which can handle AJAX. 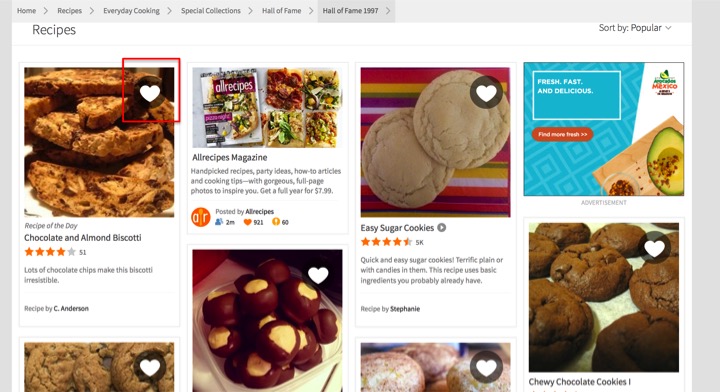 The snippet of code below uses the Selenium package in Python to extract the URLs for all the top 20 recipes of a given year.

Extraction of recipe and ingredient details 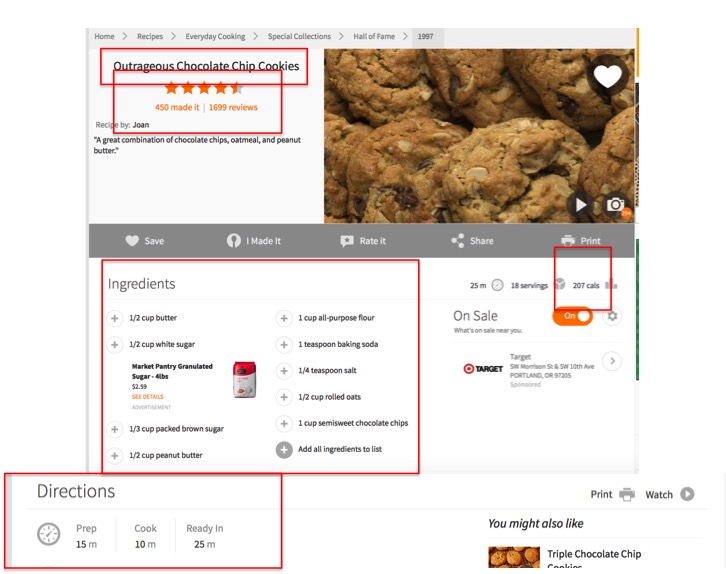 Further python code was needed to wrangle that data into a more clean format. This was performed in python notebook using a Panda dataframe. This included converting all nonstandard DayHourMinute time into minutes and converting the counter units from K's into thousands. Lastly, the data was converted into CSV and exported to R for data visualization.

Scraping 20 recipes over 19 years gives a total of 380 observations.  The data frame of the recipes is shown below. Each column represents a different aspect of recipe and the data can be considered clean at this point and ready for analysis.

One of my first thoughts in my analysis was to explore how recipes variables correlated with each other. The figure below is a correlation plot of those variables. 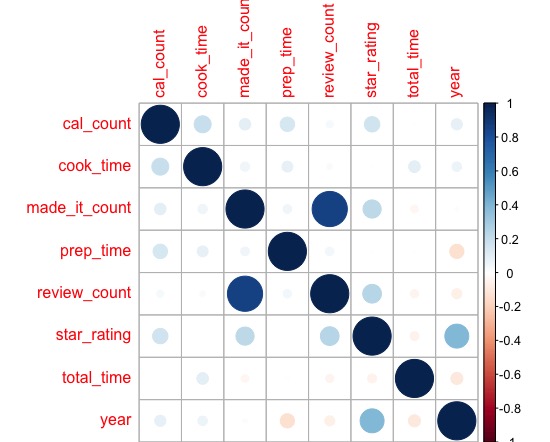 Word clouds were used to visualize the frequency words using R packages tm, snowballC, and wordcloud. The clouds were produced from a corpus of stemmed words with common English words removed (such as 'the', 'a', 'I', etc.). The first word cloud was made from the all the recipe titles. Words such as cooki (stemmed word of cookie), chicken, chocolate, banana, salad, bread, potato, pie, cake, and bake are most frequently used in the top recipe titles. 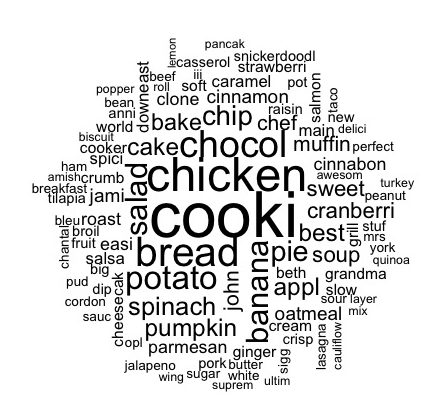 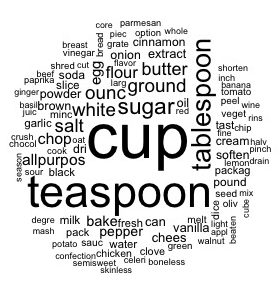 Results from the word cloud indicated that sugar, flour, eggs, and butter are some of the most frequently used ingredients from the top 20 recipe lists. From my past cooking experiences, I know those four ingredients are the foundation of baked goods. The figure below plots of the number of times those ingredients are mentioned in the ingredients list per year. It seems like there is a sharp decline in the use baked good ingredients over time and specifically after 2009. 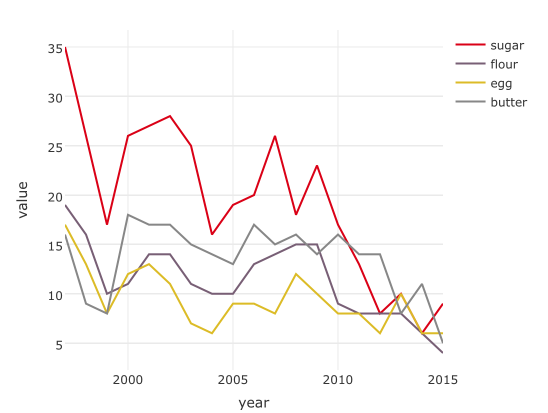 Healthiness of food is a major cultural topic in the USA. One metric of the healthiness of food is calories per serving; I wanted to explore this further. The figure below plots the median calories per serving of recipes over time. There is an initial jump in calories in the first few years, this could be a reflection of the company starting up, and after that it seems like the calories drop slowly over time. This could be an increase on the focus of healthy foods. 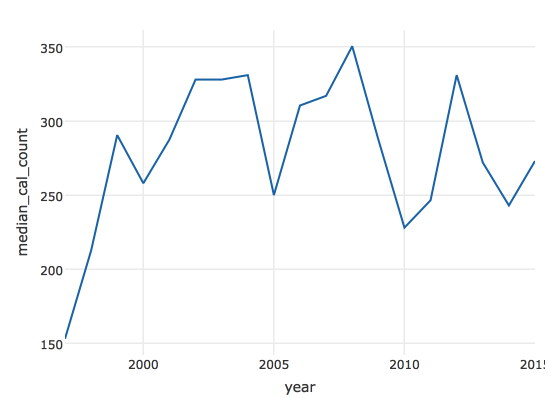 With the frequency of butter dropping over time, I wanted to know if there was a fat, like olive oil, that was supplementing it. Shown below, it seems like the use of olive oil over time has been increasing, and this could be because of the reported health benefits of olive oil. 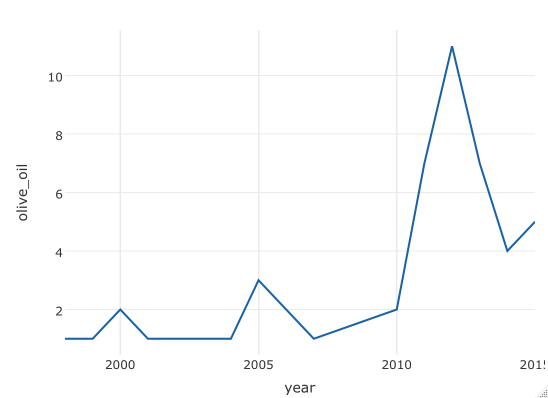 In this report, I considered this data to reflect the food trends of the average American over time. I found two aspects that showed the limitation of this assumption and the need to put data into context.

a) The need for allrecipes to innovate

The figure below plots the review count of each of the top 20 recipes over time. In the 2000's, many of the top 20 recipes have thousands of reviews for them by the allrecipes user base. Then after 2010, there is a drop off in review count for the top 20 recipes. Instead of reviews being left in the thousands, only hundreds of comments are being made for their top recipes. Are Americans less interested in sharing their thoughts on food recipes after 2010? Or does this figure represent less interest in the allrecipes users on leaving comments specifically on the allrecipes website? It maybe the latter rather than former assumption. In 2015, allrecipes announced that they were redesigning the website to make it more of pinterest like website (geekwire). Pinterest is designed around users sharing information to other users. 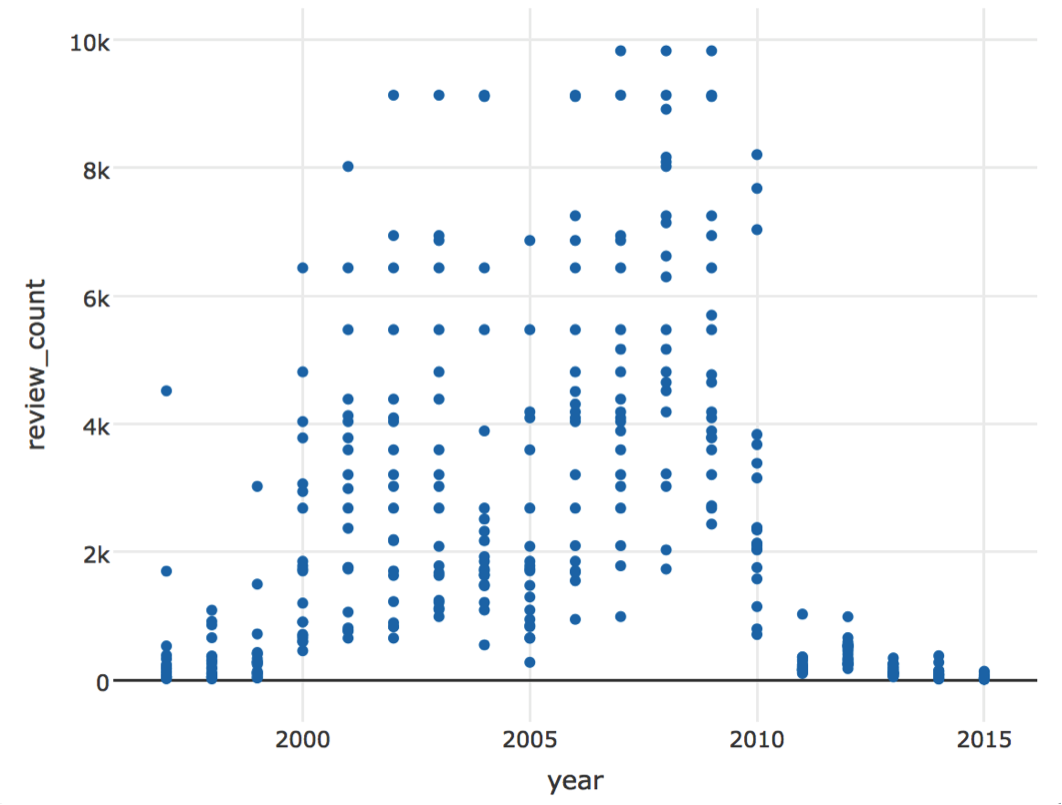 Another word that I noticed in my word cloud that was  frequently used was cookie. I wanted to understand how the trends of interest in cookies changed over time, so the figure below shows the number of recipes that have cookie in them every year. In 1997, 14/20 top 20 recipes had the word cookie in them, and over time there is a great drop off in the interest of cookies. I had heard anecdotally that cookie exchanges were really popular in the late 1990s so this did not surprise me. But when I looked at the other 7 recipes in 1997 that did not have the word cookie in them, it turns out that they were also about cookies even if they did not specifically mention the word 'cookie' (e.g., recipe for snickerdoodles). So all 20 recipes in 1997 were about cookies, and this made me suspicious. I researched the history of allrecipes.com (wikipedia article), and found out that it was started in 1997 as cookierecipe.com. This explains why all of the top 1997 recipes are about cookies. I also learned the limits of assuming the history of allrecipes.com reflects the cooking habits of Americans, at least when the website was only known for cookies.

Number of recipes that mention cookie in recipe title 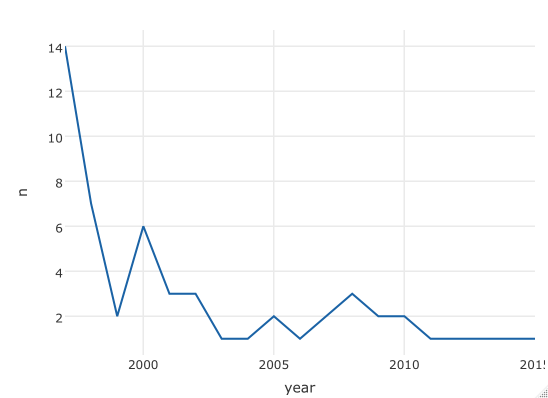 In conclusion, my web scraping of the top 20 recipes on allrecipes.com was successful. There was some interesting trends in the use of ingredients over time. However, with only 380 observations, it was difficult to interpret trends that maybe present with a larger dataset.

Google January 26, 2021
Google Always a massive fan of linking to bloggers that I adore but really don't get a whole lot of link appreciate from.

Google January 15, 2021
Google Although websites we backlink to beneath are considerably not connected to ours, we feel they may be basically worth a go by means of, so have a look.

Google June 20, 2020
Google Just beneath, are quite a few completely not connected web pages to ours, even so, they are certainly worth going over.

Google April 15, 2020
Google We came across a cool web site that you just may well delight in. Take a search should you want.

Laurie June 4, 2017
I really hate the new layout, it's one of the reasons I've never used Pinterest. After the redesign I no longer use Allrecipes either, and it was the #1 site I would look for new recipes on before. I know I'm not alone in this. That may explain some of the declining comments, just declining membership in general.

All Recipes October 13, 2016
excellent points altogether, you just gained a brand new reader. What might you suggest about your submit that you simply made some days in the past? Any sure?

AllRecipes September 28, 2016
I know this site presents quality depending posts and extra material, is there any other site which offers these kinds of things in quality?

boucles d'oreilles alhambra van cleef arpels or rose réplique September 7, 2016
I didnt think jews would be bigots afterall they have been through, maybe love for all was taught by one jew named Jesus. Im not a devout christian or traditional but the message of Jesus and symbolism of Jesus and his teachings you cant go wrong following. Of course im not talking of all jews in general but the ones who talk about everyone non jewish when they leave, i truly believe even the jew friends ive had not strict always show some jewness a rude mean condecending side somewhere that is comparable to a nazi. boucles d'oreilles alhambra van cleef arpels or rose réplique http://www.vancleefalhambra.com/fr/cheap-vintage-alhambra-long-necklace-malachite-vcarl88100-p229.html