A Relocation Guidebook for Data Scientists and More

Contributed by Amy Tzu-Yu Chen. Amy is currently in the NYC Data Science Academy 12 week full time Data Science Bootcamp program taking place between July 5th to September 23rd, 2016. This post is based on her first class project - R  Visualization (due on the 2nd week of the program).

You may also explore this project via R Code, RMarkdown, and presentation.

If you are a data scientist and you are offered a job in another city - or if your current employer asks you to relocate - would you make the move? Many may happily accept the offer and begin a new chapter of their life. Others may struggle to write down a comprehensive cost benefit analysis to avoid making a mistake. It is possible to use data visualization to quickly compare and contrast living standards and make an informed choice in a few simple steps.

The first thing for jobseekers to consider is whether their potential new city offers abundant career opportunities. This is also important for people who are transferred by their current employer because they will want to ensure they are still in demand in their new city. This analysis provides an overview of the job market for data scientists by searching the keyword "data scientist" on major job hunting websites including LinkedIn, Indeed, and Glassdoor. As of July 13, 2016, the top six cities with the best career outlook for data scientists are San Francisco, New York, Washington DC, San Jose, Boston, and Seattle. Congratulations if any of these cities is on your list for consideration. 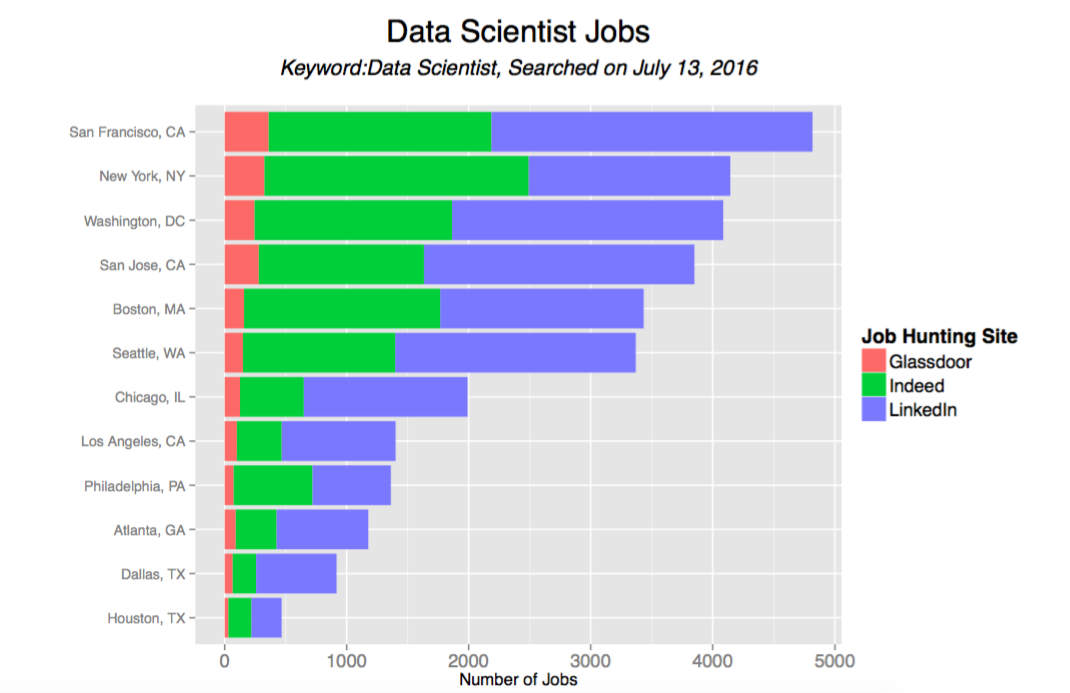 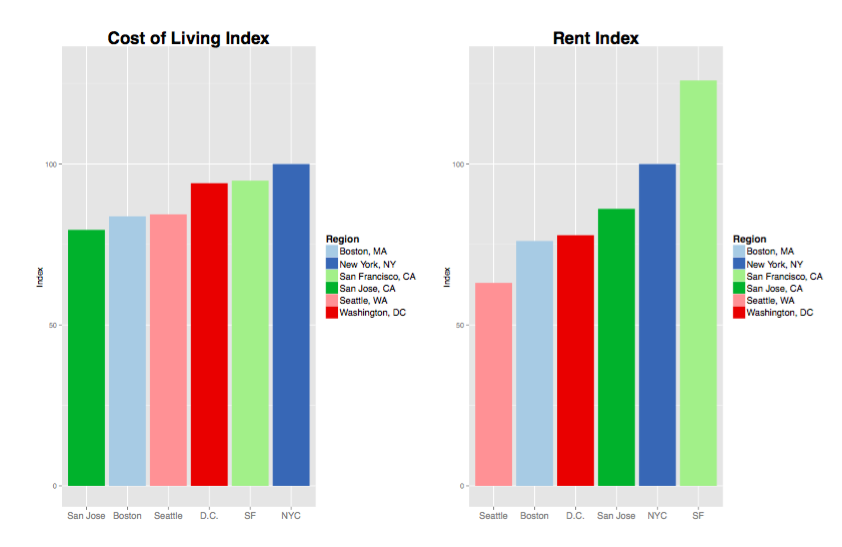 Data Source: Numeo is the World’s largest database of user contributed data about cities and countries worldwide. It provides current and timely information on world living expenses. Standard of living is divided into various categories of index including cost of living, rent, restaurant, and groceries etc.

No matter where you choose to live, housing expense eats up a large portion of your income. This section discusses both the current rental prices as well as the 2015-2016 rental market trends in four of the six cities. After reading this analysis, you will not only know whether relocation is a practical decision, but also have a general idea about what type of room to look for in the new city.

The chosen datasets for this section are Zillow's Rent Index. Zillow is an online real estate database company that publishes up-to-date rent data for public use. The datasets comprise median rent for each room type in geographic regions across the United States. Zillow uses room type as the main grouping attribute to ensure the data are unaffected by mix of homes. Also, the company tracks rents from a consistent pool of houses, which makes the time-based comparisons of rent more valid. I have decided to include only one bedroom, two bedroom, and three bedroom apartments in this discussion for two reasons. First, Zillow has complete datasets with no missing values for these types of apartments. Second, the selected room types are probably the most common choice for a city's newcomer.

The graph below shows the rankings of median rental prices for all room types.  The cities rank from most to least expensive are:  San Francisco, San Jose, New York City, and Seattle. This is mostly consistent with the ranking of Numeo's rent index except that San Jose has higher median rents than NYC for all room types. Seattle is the only place where you can easily find rent an apartment of any room type for less than $2,000 a month and you may not easily find a good apartment for less than this in the other three cities. 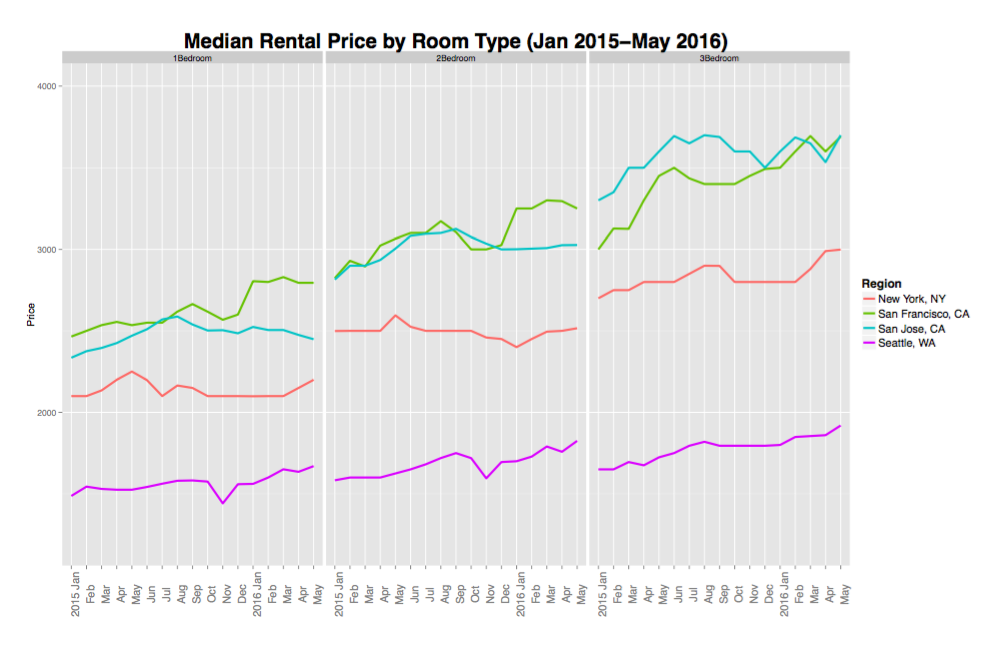 Information about rent price per square foot is more useful for one to estimate the real cost per person and decide the best value by room type in the new city. The ranking of median price per square foot by city is consistent for one and two bedrooms but varies for three bedrooms. One can more easily observe trends in the rental market in the below chart since it is on a per unit basis. For instance, the trend that rental prices in NYC and San Jose are merging becomes apparent in this graph. 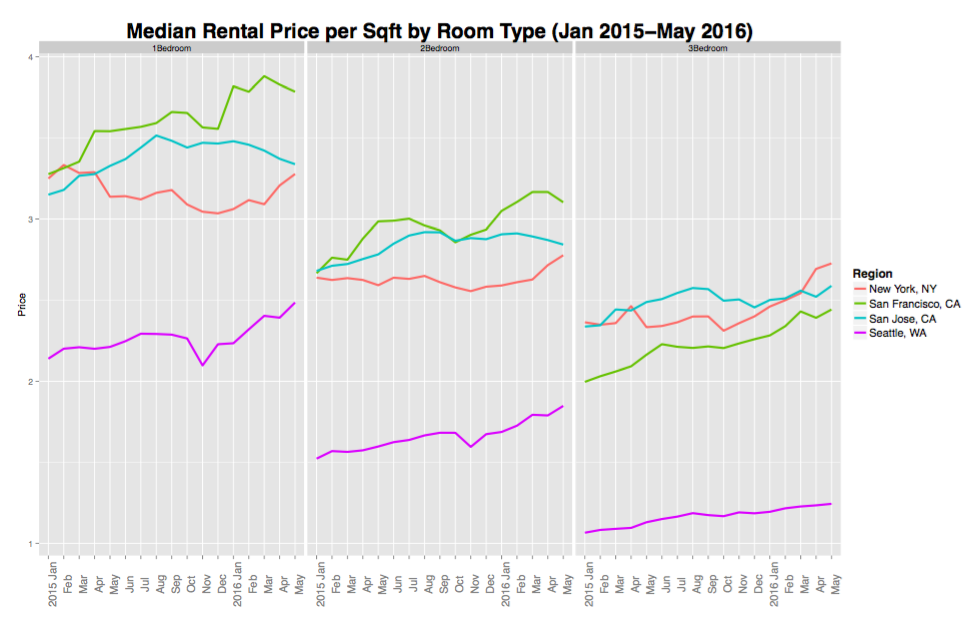 You should think twice about relocating to San Francisco if you care about sharing an apartment with others since one bedroom prices are so high. The rent level in San Francisco is the highest and it continues to rise for all room types. Although it seems that the rent for one bedroom and two bedroom apartments had stabilized in the first five months of 2016, the price you have to pay to get a smaller apartment is going to be much higher than other three cities. The least expensive choice is to share a three bedroom apartment with others. However, the price for three bedroom apartments is increasing at a relatively fast rate, which is a trend we can observe in all four cities.

NYC can finally shed the label of the most expensive city in the United States; at least, for a moment. The median rents for all room types are all less than San Francisco and San Jose. From the beginning of 2016, one can observe increasing rent prices for all room types. The rent level in NYC is on the whole increasing and is converging to the rent level of San Jose. The most economic choice if you want to relocate to NYC is most likely two bedroom apartments since three bedroom apartments have the highest price per square foot among all cities.

Seattle can easily win the contest of having the best value apartments. The prices for all types of apartments are notably cheaper than Bay Area and NYC. Although the rental prices had been constantly increasing in the past year and a half, it would most likely take a while before it reach the level of the other candidate cities.

In addition to all living expense comparisons, you may wonder what would be the best time of a year to move. In this graph, you are seeing the number of maximum and minimum rent occurrences for each room type in the 12 cities with most data scientist job vacancies from 2011 to 2016. For example, if the lowest median rent for one bedroom apartments in Los Angeles in 2013 occurred in January, then January gets one point in the minimum occurrence plot. As one can see from the graph, January may be the best time of a year to relocate. In contrast, you may risk signing a relatively more expensive lease in May. 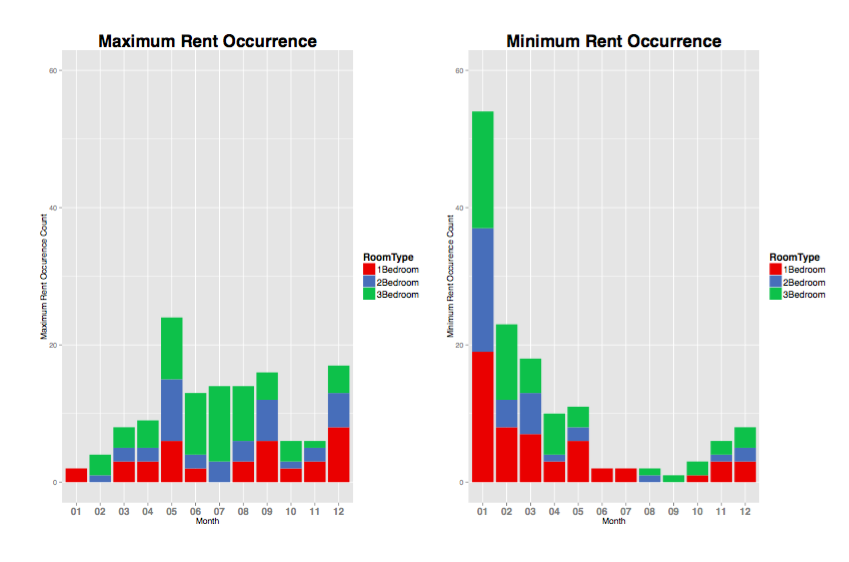