Contributed by Yannick Kimmel. He  is currently in the NYC Data Science Academy 12 week full time Data Science Bootcamp program taking place between April 11th to July 1st, 2016. This post is based on his first class project - R visualization (due on the 2nd week of the program). 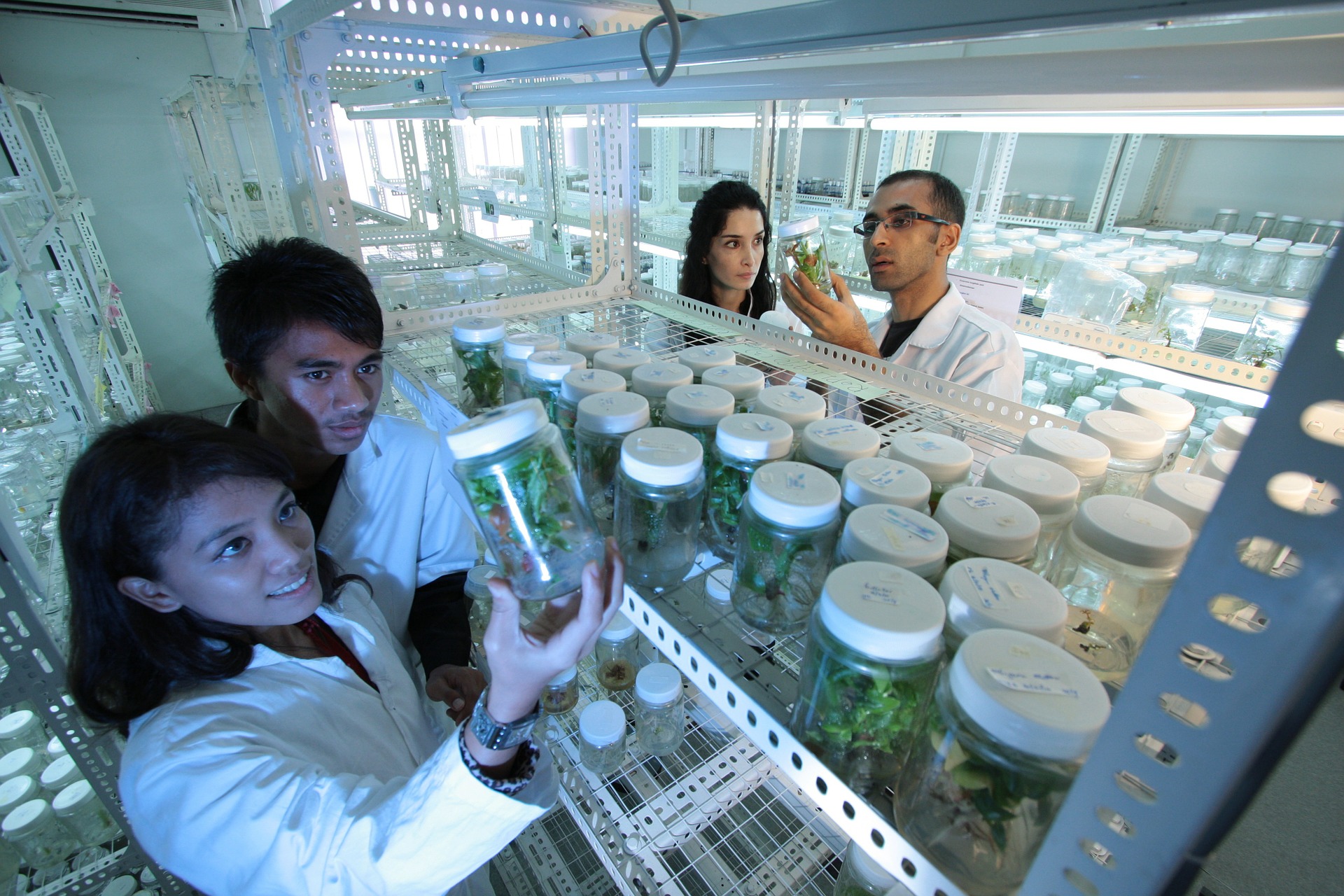 Technology is one of the few ways that can increase the productivity of a nation. New technology is produced from research & development (R&D). Understanding how technology and R&D is changing is important to policy makers, economists, and researchers. I personally became interested in how R&D is changing in the USA and other countries after I became aware of the lack of R&D jobs available in manufacturing while finishing my PhD. The code for this project can be found here.

The data was originally taken from the World Bank's World Developments Indicators dataset. It is a fantastic dataset with statistics on up to 247 countries and regions on 1,344 developments indicators. The yearly indicators range from as early as 1960 to as late as 2015. I used the transformed dataset available on Kaggle. The transformed dataset is clean, with columns for country name, country code, indicator name, indicator code, year, and indicator value.

There were several countries I was interested in their R&D output. I selected USA, Euro Union, and Japan because they are established high research performers. I also selected China, India, (South) Korea, and Russia as they are at least perceived as growing.

Input: R&D expenditure as % of GDP

A good metric for how much R&D input of a country is the R&D expenditure as % of GDP. This normalization allows for the comparison of different countries. The figure below shows that the R&D expenditures of Korea and China are rapidly increasing, while Japan and USA are high and steady. It is interesting that Korea is now spends the highest out of the selected countries. Business Insider attributes this to Korea's desire to compete against China in quality rather than quantity. 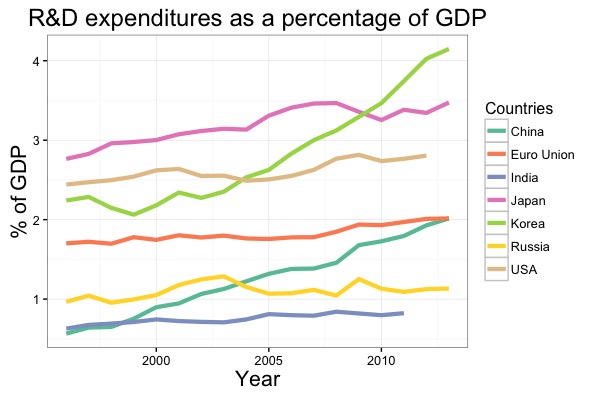 My first metric for R&D output was the number of scientific and technical journal articles published per year. This metric can be considered mostly an academic measure as publications are helpful for spreading ideas, but have limited financial benefits. This metric is not perfect, as the quantity of publications does not necessarily reflect the quality of the publications.  For this exploratory analysis, however, quantity of journal articles will be suitable. Both the Euro Union and USA publish a high amount (with EU increasing), while Japan is decreasing. The number of publications in China is increasing and is ranked third. 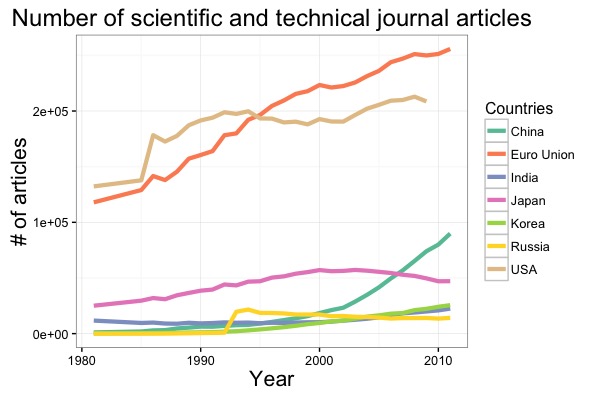 The number of patent applications as a R&D output is complimentary to number of published journal articles. This is because while published journal articles does not have direct financial benefits, patent applications do, and can be considered an industrial R&D measure. The rapid increase in the number of patents in China reflects the high interest in China in manufacturing from both foreign companies and Chinese nationals. It is also worth noting that the number of patents in the USA and Korea (a small country) are also high and increasing, while decreasing everywhere else. 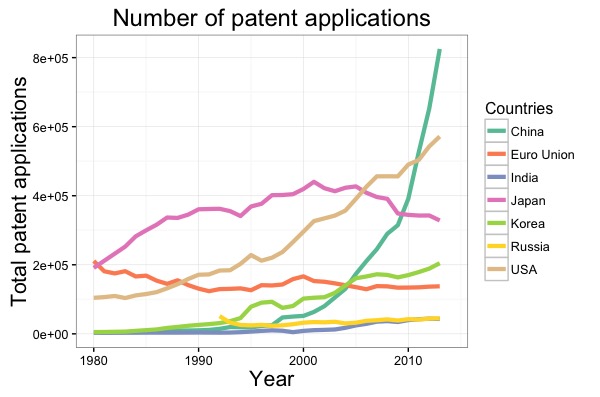 Number of Researchers in R&D

The figure below shows how the number of researchers are changing over time. Korea is rapidly increasing and Euro Union is also increasing while the rest of the countries are relatively flat. The increase in researchers match similar trends in increase of R&D output in Korea. 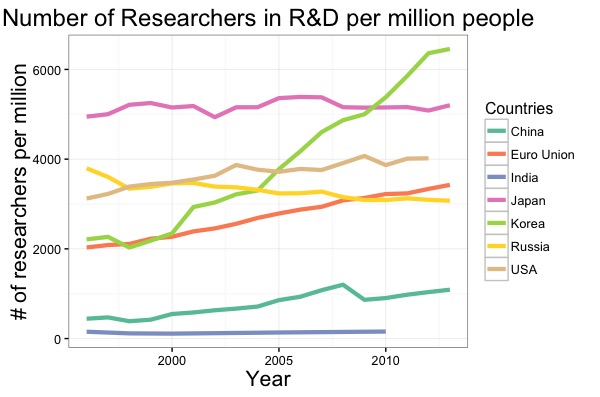 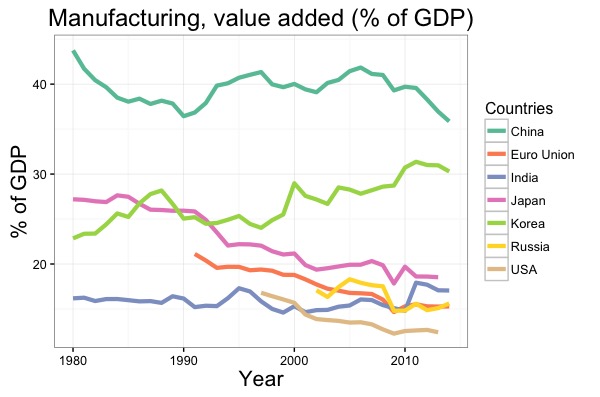 World map of manufacturing in 2013

I wanted to get a better understanding of the importance of manufacturing in the world. I used the package rworldmap to visualize manufacturing across the world. From the map, it is easy to see that manufacturing is still very important in Asia and Central and Eastern Europe. 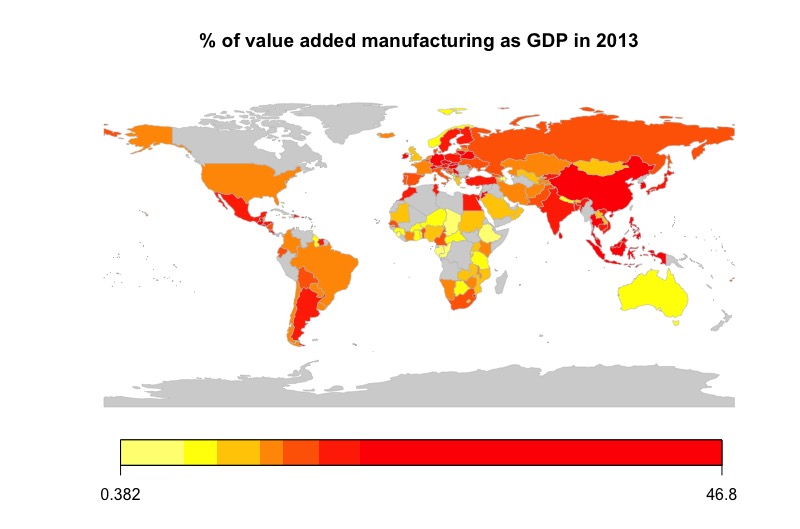 China’s R&D expenditure and output rapidly increasing. The R&D in Korea is also increasing. While the USA shows strong R&D outputs. However, there discrepency between research and manufacturing output in USA and EU. This could explain why I noticed a lack of research jobs in the USA.