Why do some competitive long distance runners prefer to train in groups? Does data prove training with a group help improve performance? My husband, Mani thinks so – he is running his first TCS NY marathon this year.

I am a 5K runner and I prefer to train alone as it is easier to pace myself and most importantly there is no pressure what so ever. Yes, I have finished races but not to my satisfaction. My 5K pace does not show much progress. So can training with a friend or in a group actually help me? What can historic running data show me?

To help with my research I used data from Mani’s running group. The data was collected by a group of competitive runners for over a period of nine years. The group trained to run the JPMorgan Chase corporate challenge and gradually moved to other challenges. Training runs with group or ‘speed runs’ as they call it are to challenge and motivate. The group’s coach would then collect information from each runner and enter it manually into excel to yield calculations like pace, speed and to provide comparative analysis. The group also uses running apps like run-keeper or map-my-run.

For my analysis, I categorized the runs as ‘Speed Runs’, ‘Corporate challenge’ and ‘other races’ based on the race dates.  I selected two runners one who trained regularly and one that did not but still ran other races. With that I attempted to answer the following questions:

First to get a sense of what the pace looks over the years, I selected one runner who trains with group regularly and has been running corporate challenge for a long time and eventually ran other races.

The below graph uses plotly to trace the average pace over the years grouped by the race type. 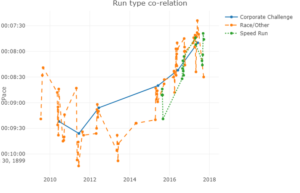 The graph indicates a positive correlation between training runs and the progress in the corporate run pace. One thing I noticed was the average pace improved over the years. As the pace shown is a 10 mile average, I decided to plot another graph to see if there is a connection between mileage and pace. 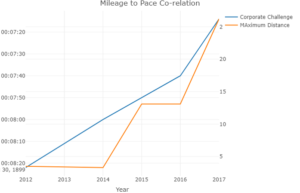 Its very evident that the runner’s pace improved as he increased his mileage.

Runner 2 : did not train with the group but ran other races. 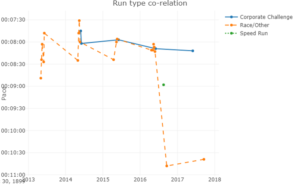 The runner showed a downward trend with respect to his pace in actual races. 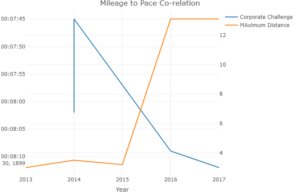 Interestingly his pace got worse as he increased his mileage. There could be several factors contributing to the decline. But what stands out from the above graph is his lack of training.

Historical running data can be used to predict future race performances. I used Pete Riegel’s formula, t2 = t1 * (d2 / d1)1.06 to calculate the time taken to finish a distance given the 10 mile historic average. The time was converted to minutes to supplement calculations. 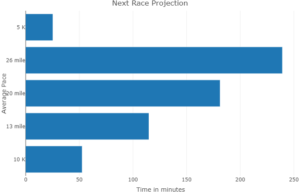 Lalith holds a Masters degree in computer applications from Bharathidasan University, India. She loves to program and has more recently progressed into a fascination with extracting meaning from data. She's completed a 12-week Data Science course at NYCDS.
View all posts by Lalith Sugavanam >