Contributed by Rob Castellano. He is currently in the NYC Data Science Academy 12 week full time Data Science Bootcamp program taking  place between April 11th to July 1st, 2016. This post is based on his third class project - Python web scraping (due on the 6th week of the program).

A Song of Ice and Fire (ASOIAF) is a series of fantasy novels by George R. R. Martin. It is also the basis of the hit HBO television show Game of Thrones. The world of ASOIAF is large, complex, and has a lot of source material (and hopefully more to come!). As a big fan of the books and the television show, I was interested in examining data and exploring various facets of the series. I was also curious how my opinions on aspects of the series (such as favorite books and characters) compared to other fans.

The popularity of the ASOIAF series and Game of Thrones has resulted in a large community of fans. For this project, I scraped data from TowerOfTheHand.com, a self-described "Encyclopedia of Ice and Fire." It is a fan-created reference for both the books and the television show with information such as:

Before describing the data I gathered, I will give some basic information about the series.

About the ASOIAF series

There are five books in the series (so far):

I will use these abbreviations for each book. The average length of each book is almost 1000 pages. There are three main storylines that intertwine throughout the novels. There are many different settings and an extremely large collection of characters, each belonging to a "house" (family), and many complex relationships among them.

One of the narrative features of ASOIAF that I found most interesting and lends itself to analysis is that each chapter has a point of view (POV) character. Within a chapter, the action is narrated in the limited third person from the perspective of the POV character. Thus, the reader develops relationships with several characters; there is not one main character and characters you think are main characters die. This narrative structure results in different chapters having different styles and readers having a wide range of favorite characters.

Data to be analyzed

TowerOfTheHand.com contains  chapter summaries for every chapter. For each chapter I gathered the following information:

The data is gathered by members of the TowerOfTheHand community. Note also that not all chapters of A Dance with Dragons (the most recent book) have summaries--summary writing is a work in progress. At the end of this post, in the Scraping section, I describe how I scraped this data.

The following were the questions I was interested in exploring in the data:

There are 344 chapters is the series and users on TowerOfTheHand rate each chapter on a scale of 1 to 10. The mean score is 7.9, with the minimum of 5.84 and a maximum of 9.32. Below we have the distribution of scores across all chapters. 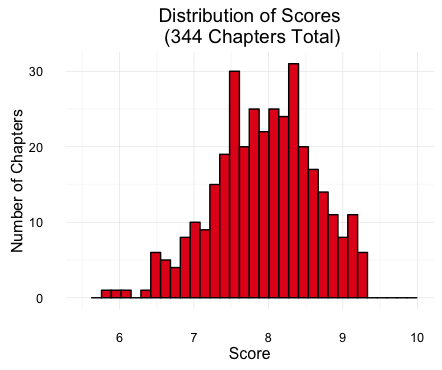 I next looked at the distribution of scores by book. The books ordered from highest to lowest mean chapter score is: AGOT, ASOS, ADWD, ACOK, AFFC. AGOT also has the second lowest standard deviation, meaning it is a highly rated and consistent book. My personal rankings of the books would have AGOT and ASOS switched; I was surprised that AGOT was voted higher and more consistent than ASOS as ASOS is my favorite book and the favorite of many people I've talked to. ADWD being good but inconsistent agrees with my opinion. More information on books will be seen in a Shiny app below. 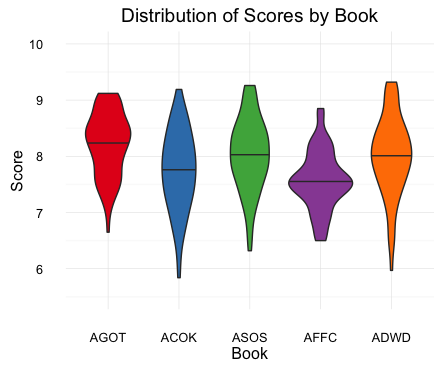 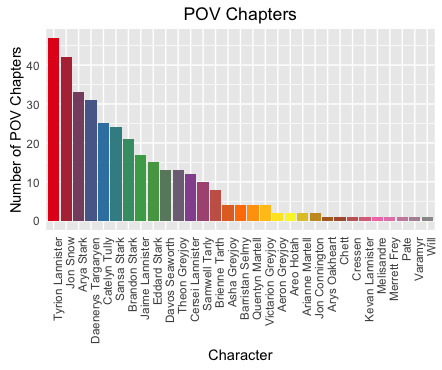 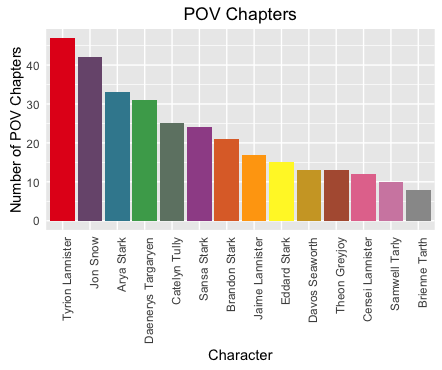 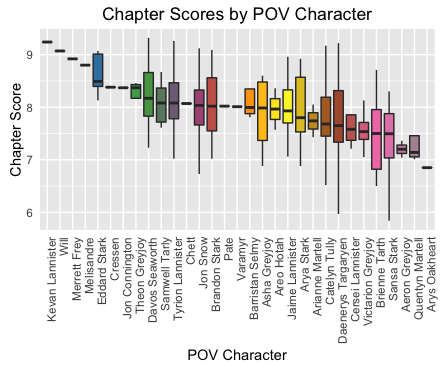 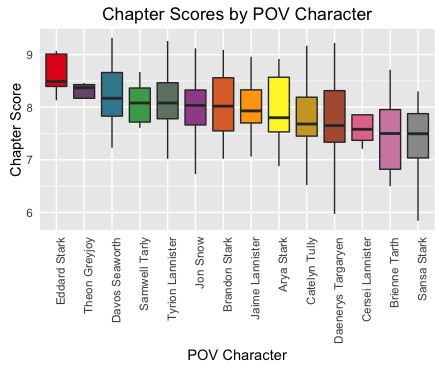 I created a Shiny app to help visualize all chapter scores. Explore this app here.

In this app you can display all of the chapter scores, view the ratings trends for each book, and highlight the chapters of any number of POV characters. Note that hovering over a chapter will show the POV character, chapter name, book, and score for that chapter.

By looking at all the chapter scores and the trends for each books we can see: AGOT is consistently highly rated, ACOK is not as highly rated and dips towards the end of the book,  ASOS climbs in ratings and ends in a huge climax, AFFC gains momentum as the book progresses, and ADWD is highly rated, but with large variability. This agrees with some of my opinions of each book. For example, although AGOT may be rated higher overall, the end of ASOS is incredibly exciting. Also AFFC starts slow, but by the end is very good and on par with the other books.

I created word clouds for many of the main characters/houses in ASOIAF based on the summaries from POV chapters from that character/house and in the style of their house banner. 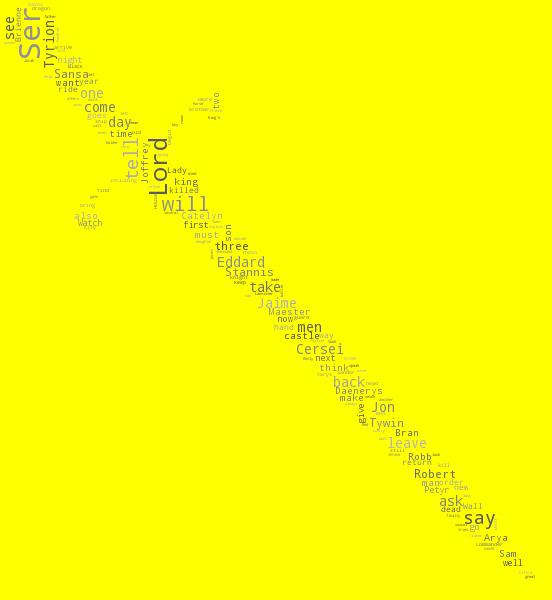 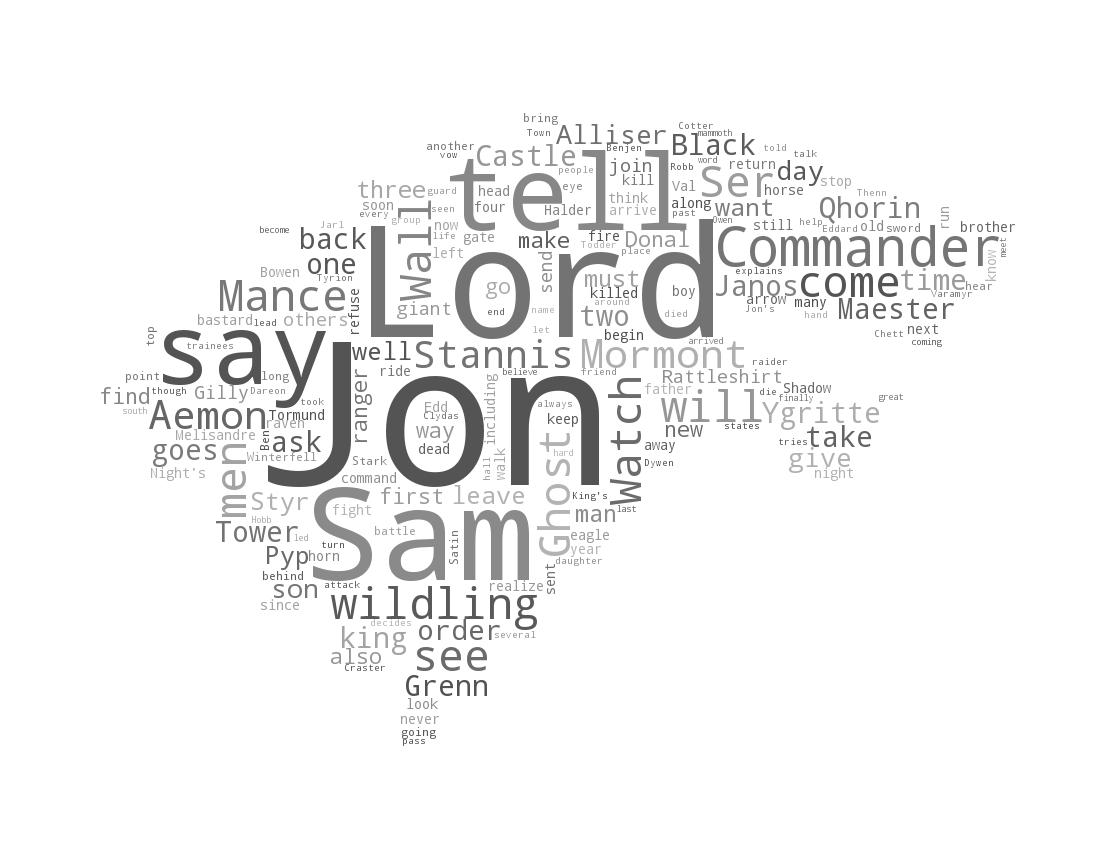 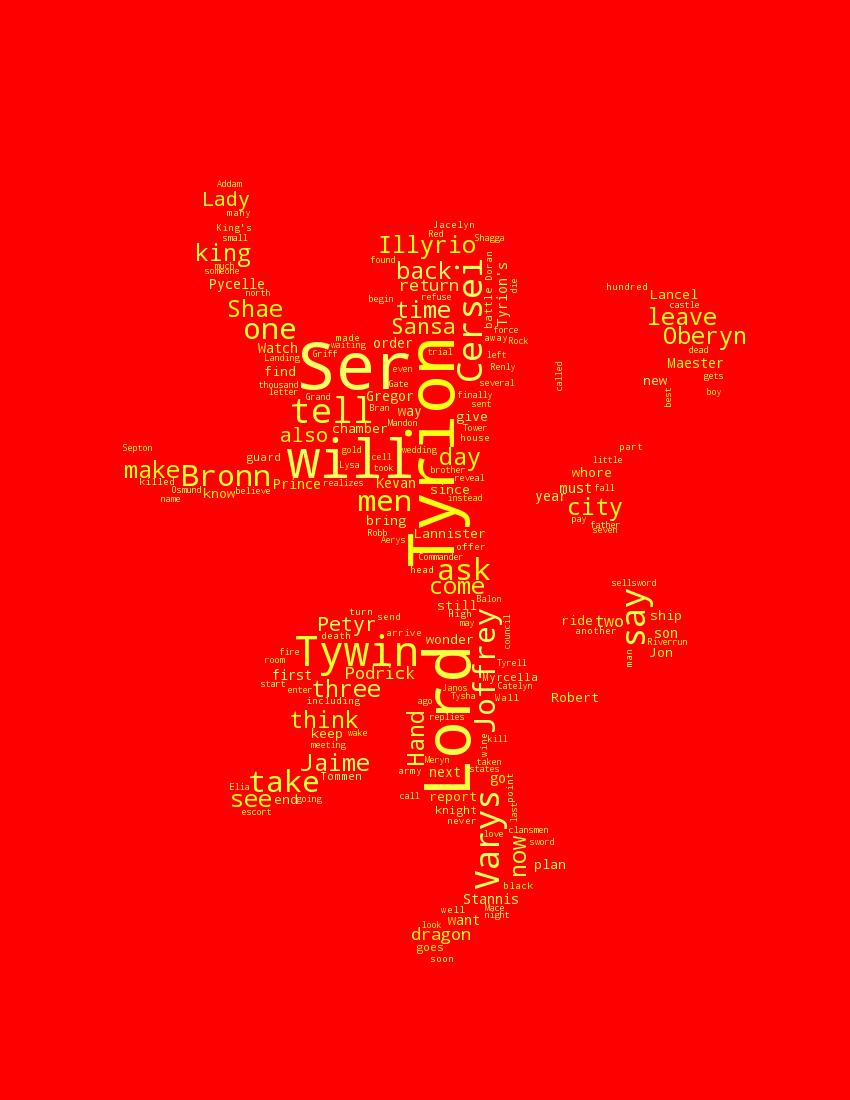 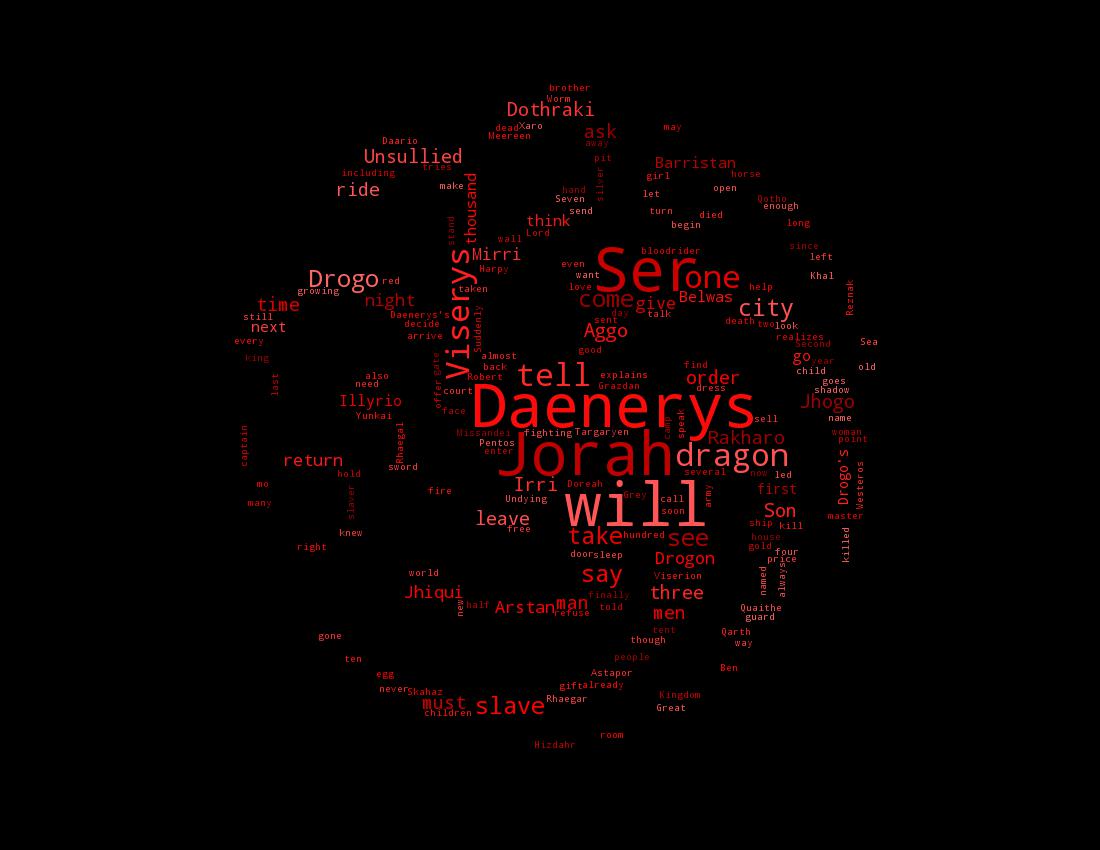 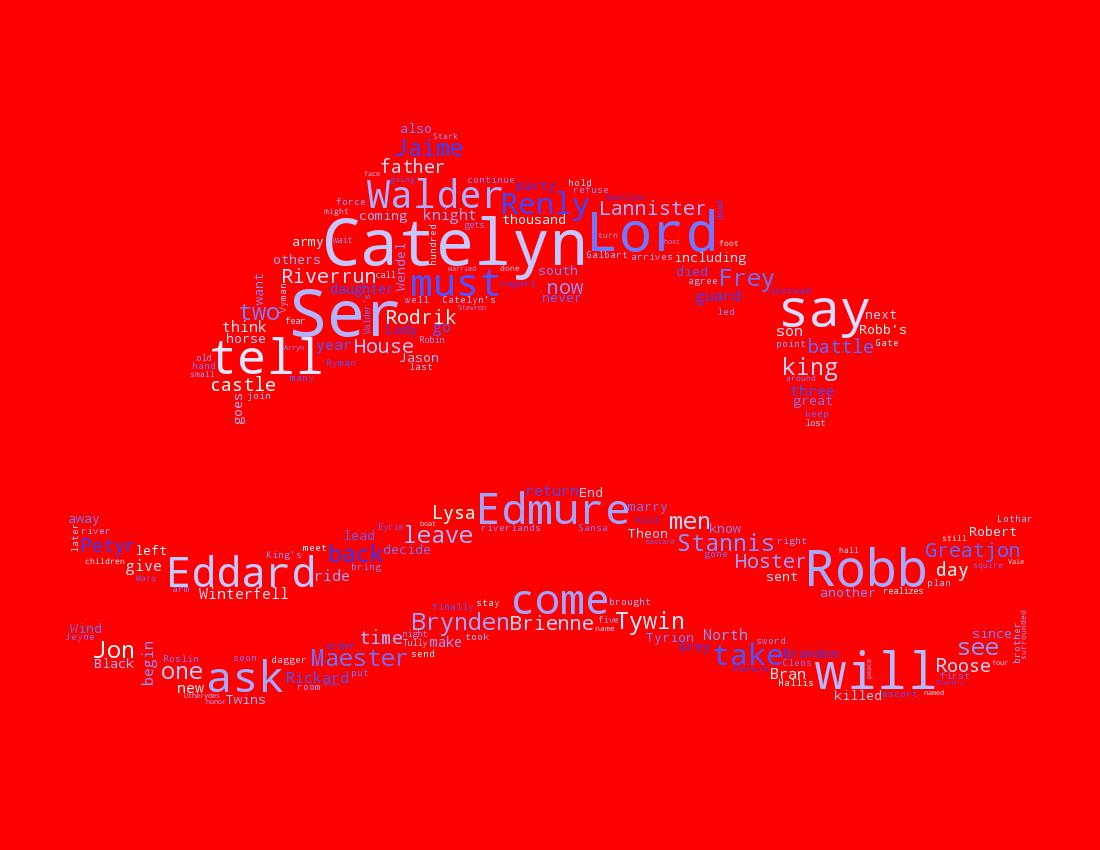 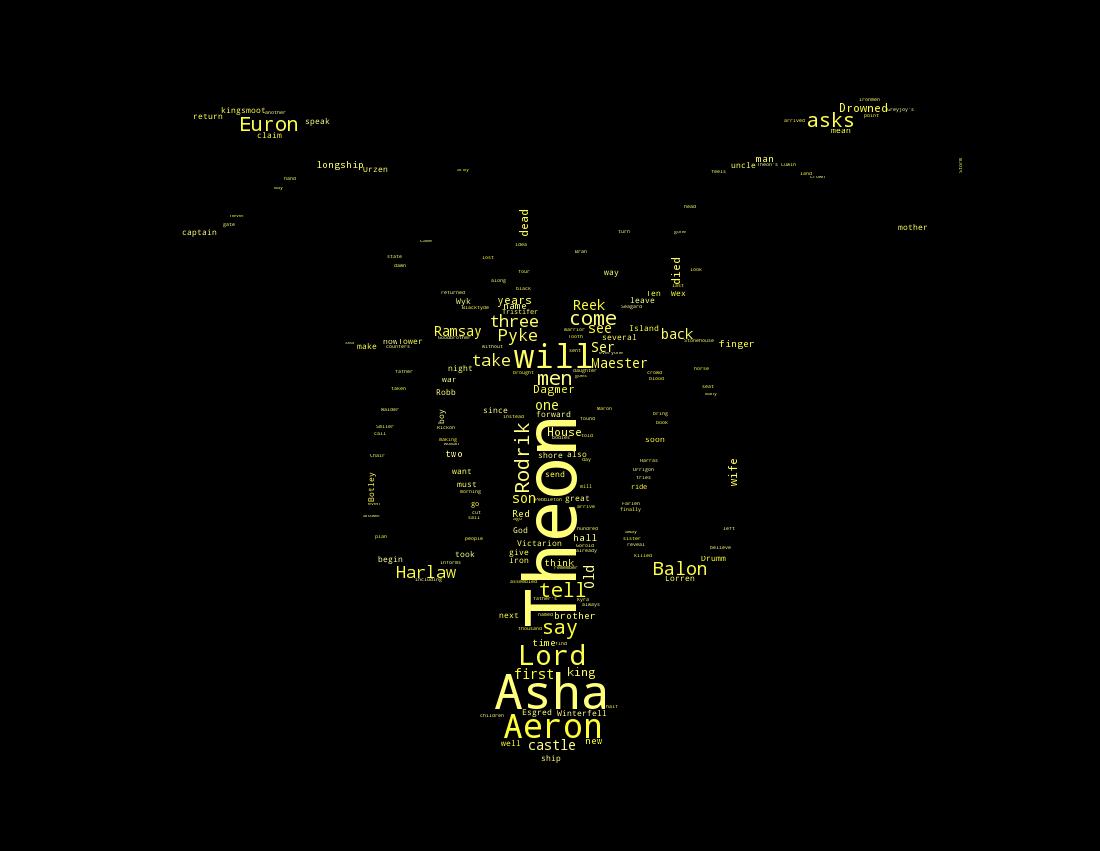 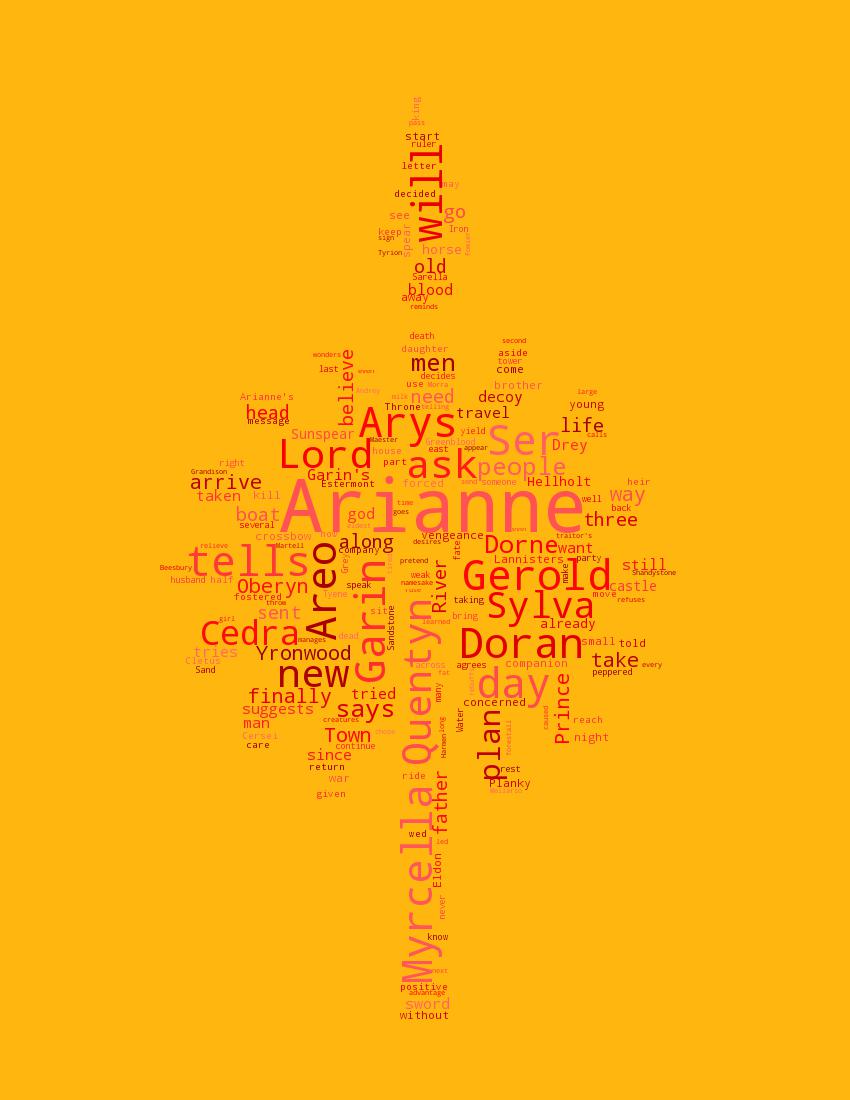 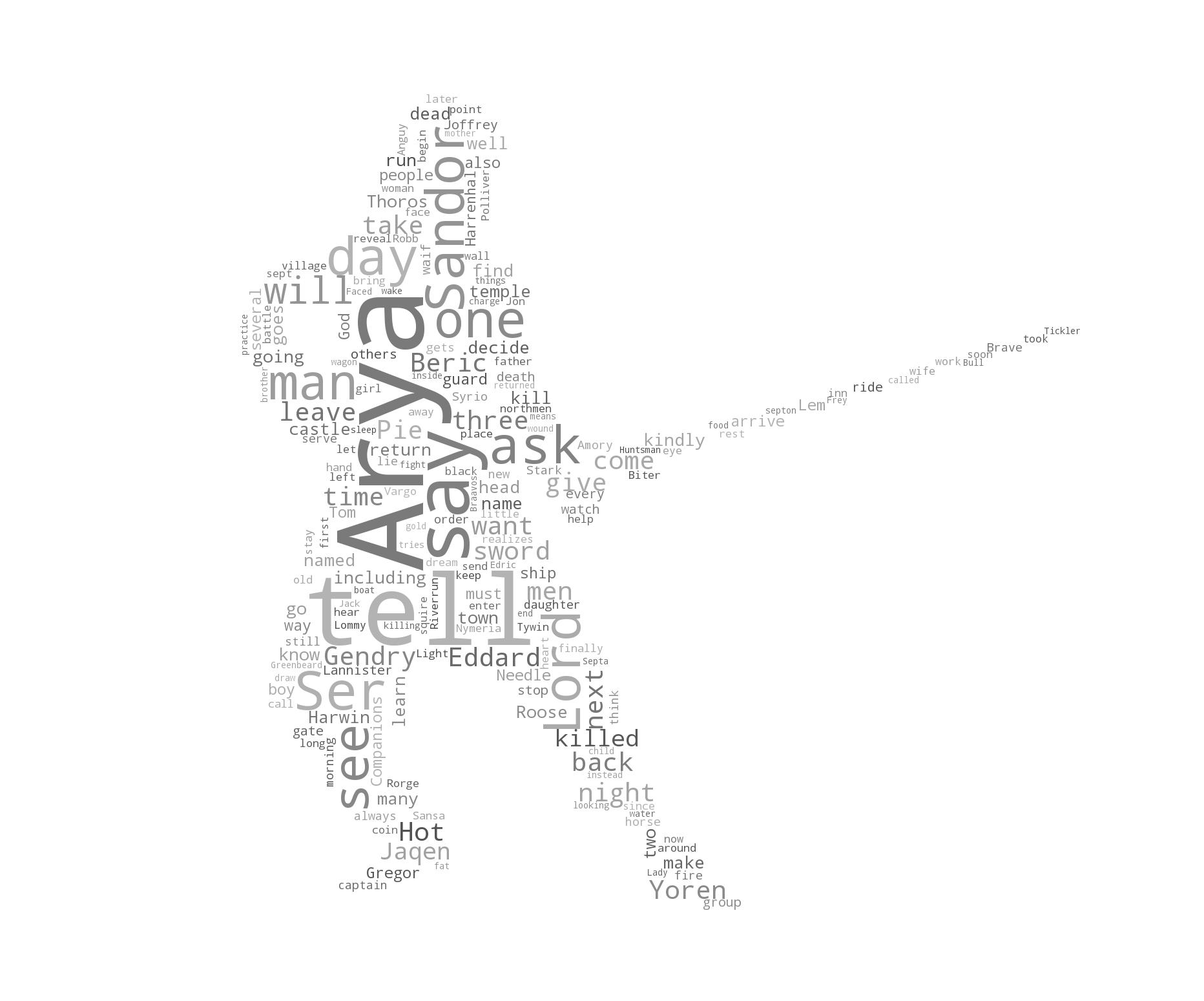 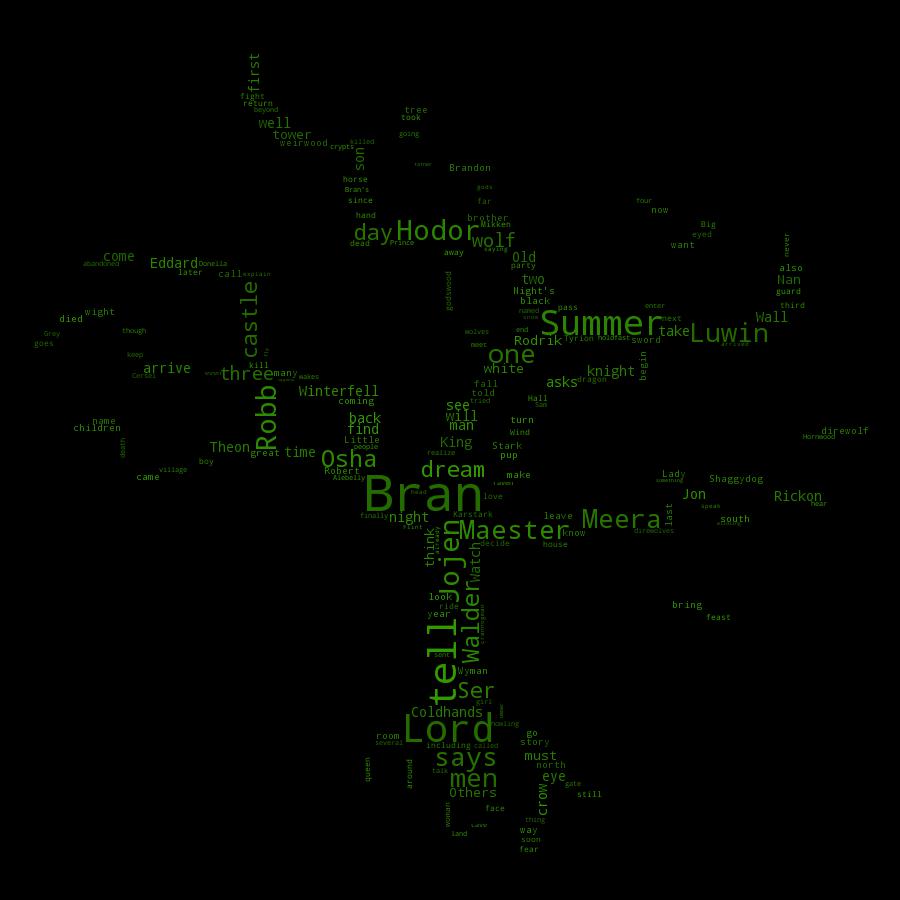 This analysis is just the beginning of what could be done with the ASOIAF data I scraped. Some other areas I would like to explore are:

As mentioned earlier, I obtained the data I used from TowerOfTheHand.com by scraping information on each chapter. All of the code to do this can be found in the "scraping" folder on  GitHub.

To scrape, I used the Python package Scrapy. Briefly, Scrapy is a package that facilitates extraction of information from well structured websites. You specify the type of information you want, what to do with that information, and how to get it. The portion that describes how to get the data is called the "spider" because it crawl though the website (and sometimes from one website to another) collecting the data you've specified.

Below I've included the code for the spider that scraped the data for this project. This is most of the hard work that is involved in getting the data. I then exported this data to MongoDB from which one can analyze, write to a .csv file, etc. Worth noting is that I also use the Selenium package, which simulates a browser to help facilitate scraping the data. This is necessary because the score of each chapter is dynamically fetched based on current voting.