Scraping Rotten Tomatoes: The Only Way to Test a Theory

The success of ratings-aggregating sites like Rotten Tomatoes and IMDB implies something uncontroversial: film reviews matter.

Perhaps that's why many reviews are read by visitors who have already seen the reviewed movie. Few things are as pleasant as seeing a privately formed opinion shared by others; conversely, it can be fun to disagree with the consensus view. However, the chief purpose of film criticism remains to inform the decisions of movie-goers who have not yet purchased a ticket, and it is with that in mind that I noticed something interesting going on in the small world of online film criticism.

What these films have in common (or don't) is easily discerned with a little cultural context; with the exception of Midsommar, they have excited political/cultural controversy. The deviations in scores they receive seem at least partly reflective of the caution with which professional critics tend to treat culturally volatile material.

The problem is, that's a nearly unprovable assertion. However, this insight contains something of potential value; what if, because of a complex social phenomenon, the group of people whose job it is to think about and criticize film are actually the last group from whom a typical person should want to take film advice? That seems to leave the audience score to rely on - however, doing so consigns us to a diet of Disney films and Friends. While we don't want to miss out on movies like Joker due to a low critic rating, neither do we want to subject ourselves to something like The Last Jedi because of a high one. What to do?

Taking the percent-change difference between critic and audience scores might be one way of cutting through the noise inherent in reviewing a controversial film, in order to distill a more accurate indication of how likely a typical person is to enjoy a given movie.

To do this, I needed to scrape Rotten Tomatoes for some data. Specifically, I looked for the top 100 (critic-reviewed) movies by genre, across 16 genres. With all films present, that's 1,600 movies on which to do a little Python analysis and graphing.

Technical note for those interested: for this project, I used Scrapy to collect

the fields of "title", "rating", "critic's score", "audience score", "runtime", and "box office". The percent-change was calculated with this bit of code:

The box office data, pictured below, is given in two forms. Because scientific notation is a poor way of communicating very large numbers graphically, I performed a log-transformation to give a more understandable look to the distribution of revenue figures for these movies: 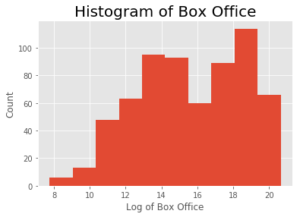 A jointplot of audience and critic scores: 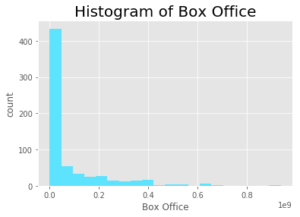 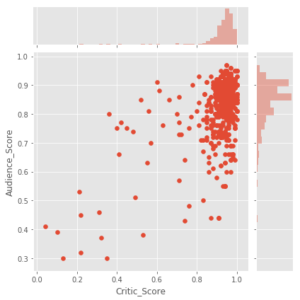 And various self explanatory graphs: 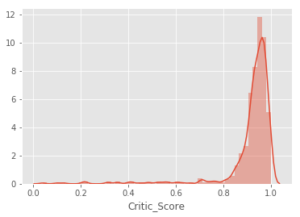 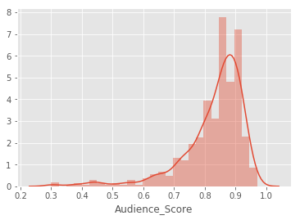 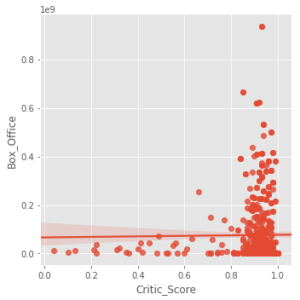 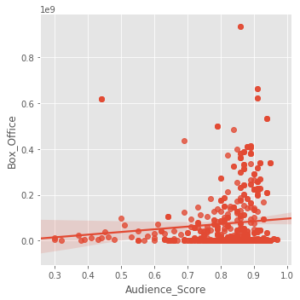 Finally, a look at how the percent-change, from audience score to critics', changes in relation to 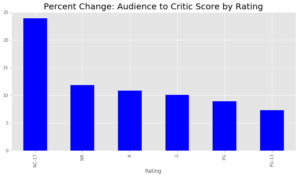 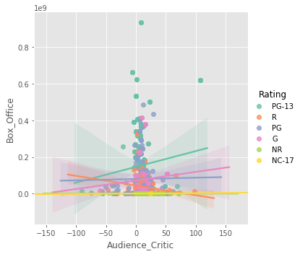 Some of the findings of my analysis are in line with what we might expect; naturally, the distribution of critic's scores is much taller than that of the audience scores. After all, the "top 100" lists from which I scraped the data are top 100 by critic score.

Others are more surprising; that the percent-change between audience and critic scores should be so positively correlated with a film's PG-13 rating is surprising. The opposite relationship is observable between percent-change and movies with an R rating.

There's more work to come on this idea. Eventually, I'd like to write a continually-updating list of films ordered with respect to percent-change, but weighted depending on the count of reviews, and filterable by all the usual knobs (genre, release date, etc.). I believe this will prove to be an effective and interesting way of cutting through the problem of critic bias in film criticism.

View all posts by Arliss Coates >