Contributed by David Comfort. He took NYC Data Science Academy 12 week full time Data Science Bootcamp program between Sept 23 to Dec 18, 2015. The post was based on his fourth class project(due at 8th week of the program).

My overall goal was to determine if the sentiment of US Presidential Candidates in news coverage can be detected. Specifically, I extracted articles about the major presidential candidates in the New York Times and attempted to perform sentiment analysis.

A screen capture of the presentation is below:

1. Identifying Articles in the New York Times using their API

To begin, you first need to obtain an API key from the New York Times. See here for more information.

You also need to install the nytimesarticle Python package, which allows you to query the API through Python.

Put the Articles in a Dataframe 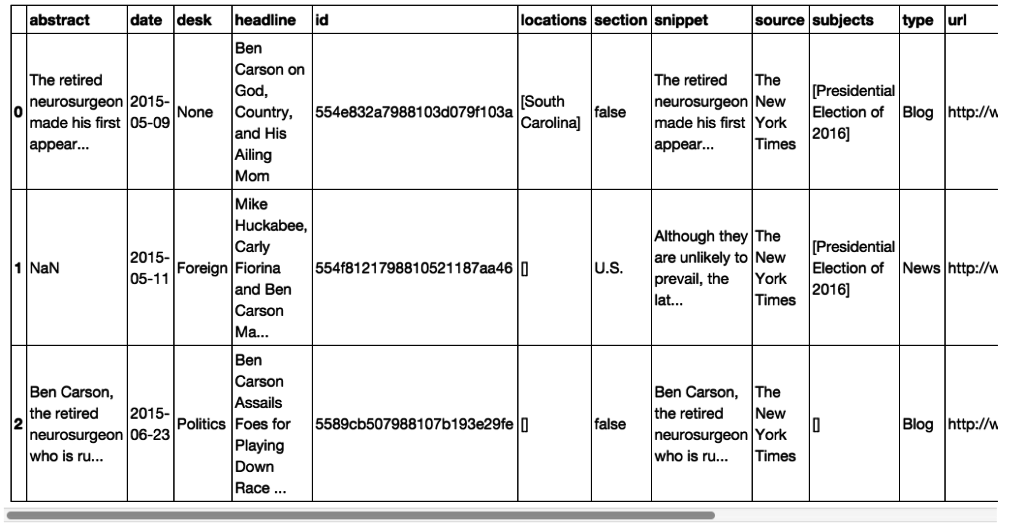 Now that we have a function to parse results into a clean list, we can easily write another function that collects all articles for a search query in a given year.

Now I can get articles for each candidate. For instance, for Bernie Sanders: 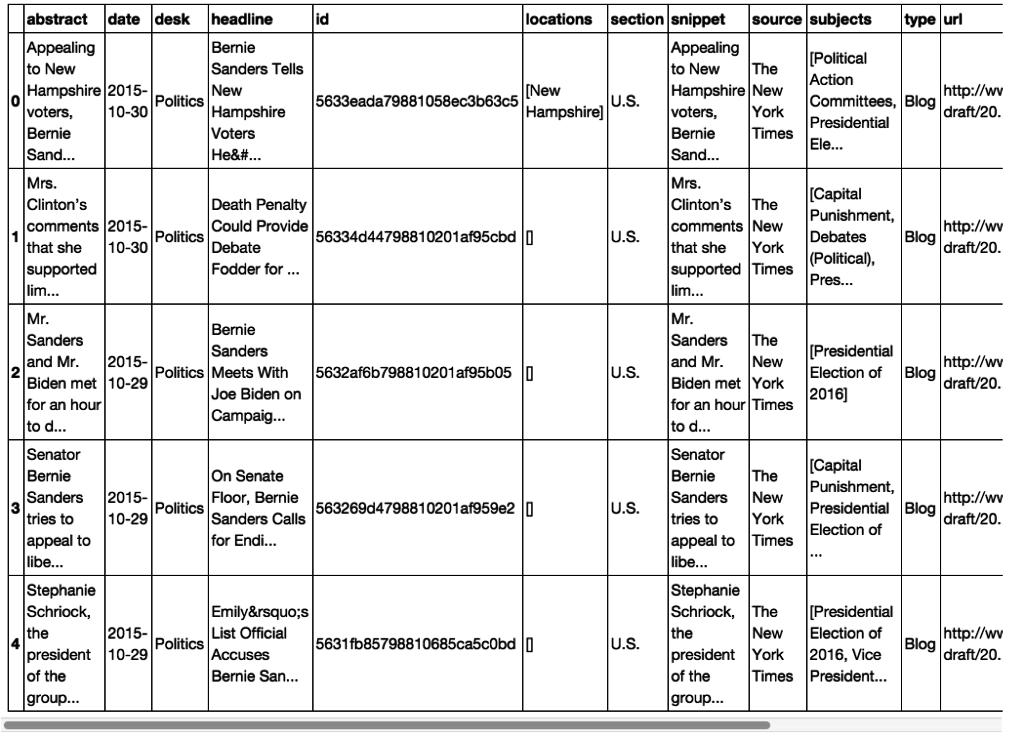 In the course of doing this project, I discovered several web scraping tips and tricks. I learned some of these techniques from the book, Web Scraping with Python: Collecting Data from the Modern Web, although I wish the author went into a little bit more detail sometimes.

HTTP headers are a list of attributes, or preferences, sent by you every time you make a request to a web server. A typical Python scraper using the default urllib library might send the following header:

We can utilize the following code to examine what a server would "see" if I tried to scrape their site:

Notice that the USER_AGENT is set to python-requests/2.3.0 CPython/2.7.10, which might alert the site that I am scraping that I am indeed scraping their site.

However, we can change the header using the code below so that our web scraper appears "more human":

Now, the USER_AGENT is set to Mozilla/5.0 (Macintosh; Intel Mac OS X 10_9_5), so the website will think that I am a human using a browser to view their site.

Browser plug-ins that can show you how cookies are being set as you visit and move around a site.

In the above code, I first send the login parameters to the welcome page, which acts as the processor for the login form. I then retrieve the cookies from the results of the last request, print the result for verification, and the send them to the profile page by setting the cookies argument.

The session object (retrieved by calling requests.Session()) keeps track of session information, such as cookies, headers, and even information about protocols you might be running on top of HTTP, such as HTTPAdapters.

The first request to the URL will fill the jar. The second request will send the cookies back to the server. The same goes for the standard library's urllib module cookielib.

There are some excellent Stackoverflow posts which cover how to handle cookies while you are web scraping:

You can also space out requests so you are not overloading somebody else's server:

The Onion Router network, better known by the acronym Tor, is a network of volun‐ teer servers set up to route and reroute traffic through many layers (hence the onion reference) of different servers in order to obscure its origin. Data is encrypted before it enters the network so that if any particular server is eavesdropped on the nature of the communication cannot be revealed. In addition, although the inbound and out‐ bound communications of any particular server can be compromised, one would need to know the details of inbound and outbound communication for all the servers along the path of communication in order to decipher the true start and endpoints of a communication—a near-impossible feat.

Having Tor installed and running is a requirement for using Python with Tor, as we will see in the next section. Fortunately, the Tor service is extremely easy to install and start running with. Just go to the Tor downloads page (https://www.torproject.org/ download/download) and download, install, open, and connect! Keep in mind that your Internet speed might appear to be slower while using Tor. Be patient—it might be going around the world several times!

PySocks is a remarkably simple Python module that is capable of routing traffic through proxy servers and that works fantastically in conjunction with Tor. You can download it from its website or use any number of third-party module managers to install it.

Although not much in the way of documentation exists for this module, using it is extremely straightforward. The Tor service must be running on port 9150 (the default port) while running this code:

There are several packages in Python for extracting content from Web pages. A brief overview of these packages follows:

Goose was originally an article extractor written in Java.

The aim of the software is to take any news article or article-type web page and not only extract what is the main body of the article but also all meta data and most probable image candidate.

Goose will try to extract the following information:

We can utilize Goose to extract the content, the title, the meta description, and the top image of an article based upon the URL of an article:

I also examined BeautifulSoup, although I found it less easy to use than Goose. In retrospect, BeautifulSoup is good to use if you really need to target specific elements on a web page.

This is a python port of a ruby port of arc90’s readability project. Given a html document, Readability pulls out the main body text and cleans it up.

4. Scraping the New York Times and extracting the content

Looping through each candidate and each URL

Key: ba25019e0990c87c9c4965c4898672b8ddb3f3e1 was written to api_key.txt You are now ready to start using AlchemyAPI. For an example, run: python example.py Mayor Bill de Blasio’s slow, awkward march toward endorsing Hillary Rodham Clinton — the woman who jump-started his political career — reached its widely predicted conclusion on Friday, as the mayor extended his presidential blessing on MSNBC’s “Morning Joe.” “The candidate who I believe can fundamentally address income inequality effectively, the candidate who has the right vision, the right experience and the ability to get the job done, is Hillary Clinton,” Mr. de Blasio said. Mrs. Clinton, a fellow Democrat, did not appear on the program. Nor did she issue a statement about Mr. de Blasio. Instead, the Clinton campaign emailed a note to reporters calling the New York City mayor’s support “a sign of the campaign’s continued momentum.” The note added, “The Clinton campaign will also announce that an additional 85 mayors from across the country will endorse her today.” The circumstances of Mr. de Blasio’s endorsement offered a sign of the reduced interest in his presidential preferences since he initially denied Mrs. Clinton his blessing in April. When the Clinton campaign issued an official announcement about its latest wave of endorsements, Mr. de Blasio’s was given fourth billing, after the mayors of Chicago, Houston and Philadelphia. By this week, Mr. de Blasio’s six-month delay in issuing an endorsement was viewed in political circles as quixotic at best. Virtually all leading Democrats in New York have already thrown their support behind Mrs. Clinton, along with leading liberal Democrats like Senator Sherrod Brown of Ohio. But the mayor’s vow of neutrality was initially taken as a liberal line in the sand, part of Mr. de Blasio’s effort to kick-start a national movement to nudge presidential contenders leftward. His public vacillation started in political prime time with a bold declaration during an interview on NBC’s “Meet the Press” — “I want to see a vision,” he said — hours before Mrs. Clinton formally began her candidacy. For months, the mayor’s allies objected to accusations that Mr. de Blasio wanted to play kingmaker, saying that he simply wanted to hear more detail about the policy plans of presidential contenders, particularly in the early stages of the contest. More recently, however, many members of the mayor’s inner circle had grown frustrated with his delay, saying that the uncertainty had become a distraction. The mayor’s liberal advocacy group, the Progressive Agenda Committee, also announced plans to hold a forum for presidential contenders in Iowa in December, complicating Mr. de Blasio’s calculus about whether to remain unaffiliated with a candidate. The “will he or won’t he” soap opera ended shortly after sunrise on Friday, on a low-rated basic-cable talk show amid banter about baseball and jokes about Citi Bike. “Morning Joe” is familiar, relatively friendly territory for Mr. de Blasio, who has visited its set at least six times during his 22-month term. But the mayor still faced skeptical questions from the hosts, who wondered what, exactly, had changed in the past few months to make him want to endorse Mrs. Clinton now. At one point, Mark Halperin, a political analyst, urged Mr. de Blasio to face a camera and explain his decision directly to supporters of Senator Bernie Sanders of Vermont, an independent who has been embraced by many left-leaning Democrats. “I like Bernie a lot,” Mr. de Blasio said. But he quickly added that Mrs. Clinton was “the most capable of executing the vision.” (A spokesman for Mr. Sanders did not return a request for comment.) Katrina vanden Heuvel, the editor and publisher of The Nation and one of Mr. de Blasio’s closest supporters, wrote in an email that the mayor’s endorsement “gets de Blasio on the Clinton team,” adding: “That’s good for him, good for New York, good for an urban agenda.” But she also urged Mr. de Blasio to stay vigilant in encouraging Mrs. Clinton to adopt positions supported by the left. “There is still room for her to move, and de Blasio should keep the pressure on for that movement,” Ms. vanden Heuvel wrote. For his part, Mr. de Blasio said on MSNBC that Mrs. Clinton had “a very sharp progressive platform” and “the ability to follow through on it.” He added: “There’s a lot of spine there. There’s a steel there.” Reflecting on his own thought process, Mr. de Blasio suggested that Mrs. Clinton had increasingly fit his criteria for a candidate, saying, “As you’ve seen in each successive speech, Hillary has filled in the blanks forcefully.” At the same time, he urged voters to pay more attention to her accomplishments in the past. “I think what’s missing here in this discussion,” Mr. de Blasio said, “is who Hillary has always been.”

An example of using AlchemyAPI for entity extraction is below:

I examined a couple of different packages to implement sentiment analysis.

I should note that the political sentiment for Bernie Sanders scored the highest for "Liberal."

The Bernie Sanders also scored very positively for both sentiment analysis algorithms used by Indico. Sentiment_hq is supposed to be a High Quality Sentiment Analysis.

Google January 4, 2020
Google Always a big fan of linking to bloggers that I really like but really don't get a lot of link really like from.

http proxy protocol February 13, 2017
Country - string Alpha-2 country code of the country in which the proxy is geo-located.

Gulvafslibning Pris December 11, 2016
When you see that you are down to the new wood, then you will want to use the edge sander now for skirting boards and other elements that you couldn't access with the primary equipment.

http://www.kurt-gulvmand.dk/gulvafslibning-kastrup/ November 2, 2016
What is a flooring sanding?

Vivian Zhang December 16, 2015
David, unbelievable! You did this on your last day in bootcamp!! Bravo