There used to be a long line waiting outside the Nike stores to buy sneakers not for themselves but to make money. People resold their sneakers on eBay and publicized their business on Twitter and Facebook. At the prime time of sneaker reselling, the market was worth one billion dollars per year. Back in the day, I took part in that market as a seller. After a while, I noticed that sneaker reselling business was declining. The resell price of sneakers on eBay was even lower than its original retail price, meaning you would lose money by reselling it. So I stopped buying sneakers with the intent of selling them.

1. Was sneaker reselling business on a decline?

To determine whether the sneaker reselling business was declining, I looked at the numbers on StockX, a website for buying and reselling sneakers. I scraped all the resale transactions, including sneaker name, resell date, size, price from 2011 to the beginning of 2018 and created a graph. Before we look at the graph, it is important to understand the term “price premium.” Price premium is a calculation utilized to figure out whether there is a profit or loss when an item is resold. If price premium is positive, it means you will make a profit. If it is negative, it means you will lose money.

The graph shows that the price premium of Air Jordan sneakers was still profitable from 2011 to 2015. However, from 2015, the premium started to decrease, which confirmed that Air Jordan reselling business was in decline. 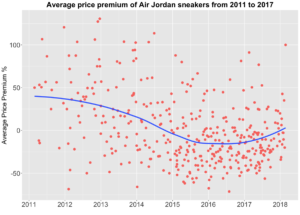 2. What caused the decline?

The next step is to figure out why the reselling business of Air Jordan declined. I plotted the number of styles of Air Jordan released each year. There was a significant increase of number of styles from 2015 to 2017. One important thing about those released styles is that most of them were not limited editions. When merchandise is not rare or limited, especially when it comes to sneakers, buyers usually will not pay good money for it. 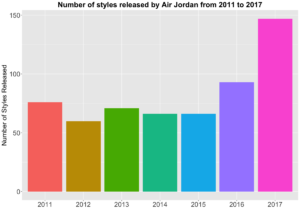 Competition was another cause of the Air Jordan price premium decline. When Kanye West left Nike to join Adidas, he also brought his sneaker brand, Yeezy, with him. After Adidas released Yeezy in 2015, the premium of Air Jordan began to drop. 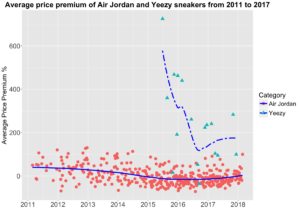 In the winter of 2015, Adidas released another style of sneakers, called NMD, which affected the price premium of Air Jordan. Interestingly, NMD's price premium also started to drop in 2016. When Adidas initially released them in 2015, NMD sneakers were limited editions. People needed to download an app and sign in to get a pair of NMD. However, starting from 2016, Adidas decided to stop limiting the number of NMD sneakers that people could buy. That decision had a major impact on sneaker resellers. 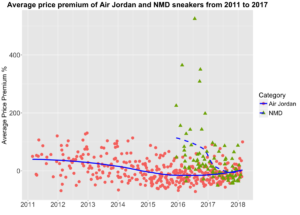 3. How can one continue to make profits in the current market?

Here's the question, how can one continue to make money in the current sneaker reselling market? Most importantly, don't put all your eggs in one basket. In addition to Air Jordan, sneaker resellers should consider stocking sneakers from other brands, such as Adidas. 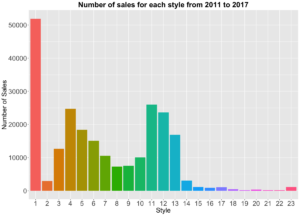 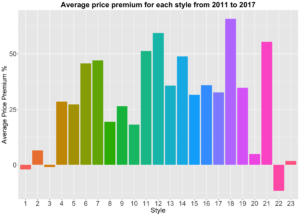 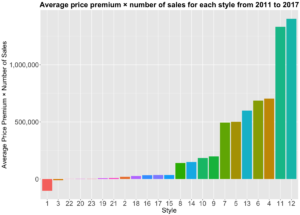 As it turns out, when it comes to sneakers, size does matter. I created a graph showing the price premium of different sizes. It seems that you could make money from selling sneakers at size 6 as its price premium is the highest. However, when you look at the number of sales, there were only about ten pairs of size 6 sold over the past seven years. When the price premium multiplied with number of sales, it turns out that size 10 and 11 are the most profitable sizes. 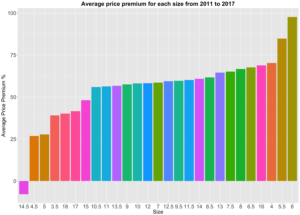 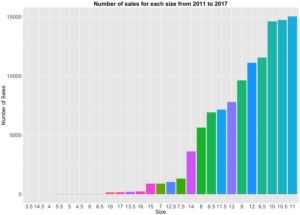 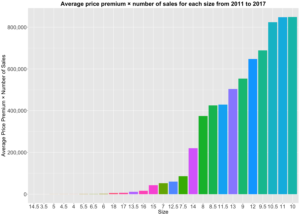 Numbers don't lie. Sneaker resellers can still make a profit and reduce their losses if they stick to limited editions, choose specific styles, and offer their right sizes.

Xiaoyu received his Ph.D. in Pharmaceutical Sciences from North Dakota State University. For his research, he designed and conducted a variety of experiments to improve current treatments for pancreatic cancer. He developed his interest in math and statistics...
View all posts by Xiaoyu Yang >