Contributed by Sharan Naribole. He is currently in the NYC Data Science Academy Online Bootcamp program taking place between December 2016 to April 2017. This blog is based on his bootcamp project - Python Web-scraping and Data Analysis.

I am a big fan of soccer supporting the English club Manchester United F.C. for the last 15 years. Most of my soccer news updates and discussions occur on the website Reddit. Reddit, claiming to be "the front page of the internet", is a social news aggregation, web content rating, and discussion website, as described by Wikipedia. Different topics of interest are organized within their groups called subreddits. For example, the popular subreddits include technology, world news, pics, players like Cristiano Ronaldo and etc.

Reddit includes a subreddit for soccer content entries/r/soccer, comprising of an enormous community of over 500,000 subscribers. Hundreds of submissions (posts) are voted based on their content and discussed on a daily basis. The common submissions include live goals, news articles and pre-, live and post-match analysis.

Many  time /r/soccer is where I vent my frustration whenever Manchester United suffers defeat!  The anonymity of Reddit provides a powerful tool for users to express their opinions about the clubs they support and also the clubs they don't like. This unique feature provides a mechanism to prevent the building of echo chambers in the discussions. The figure below illustrates a snapshot of the front page of /r/soccer.

/r/soccer also provides each subscriber the feature to select a "flair" which is the team crest (team logo) of the club/country the user supports. A miniature team logo is displayed beside the username in their posts and comments. This gives other readers context and insight into the user's thinking and adds another interesting dimension to the conversations that take place. Although one can observe the flairs for each users, Reddit does not provide the flair distribution across the whole of /r/soccer.

In this project, my objective is to scrape and analyze the flair distribution across the top posts in /r/soccer and this distribution's relationship with comments activity, submission score and submission type.

Fig 2. User flairs displayed beside their username in the comments.

For each submission, my goal is to collect the following features:

Currently, for web-scraping, there are a wide variety of Python packages available for webscraping including BeautifulSoup, Selenium and Scrapy etc. I used Scrapy because it provides a simple and structured framework to design a Spider for crawling multiple levels of pages on a website. For my project, there are two levels of crawling. The top level is where the different submission titles are listed along with their scores (Fig. 1) and the second level is the comments for each submission (Fig 2.). Later, I will describe how we can design the multi-level crawl.

The two main files in a Scrapy project directory are the items.py file and the spider crawl file. In items.py, we can define containers for storing the scraped information.

Next step is to define how our spider should crawl. I define a FlairSpider class provided with the starting url and crawling motion. To get sufficient data for the analysis, I collect the above features for each of top 1000 posts in the period Nov 12- Dec 12 2016.

For this purpose, I provide the start_url to extract the top posts in the past month. Reddit provides the top 1000 posts in the past month in a descending order of 25 posts per page. Additionally, I provide parameters for the comments constraint and upper limit on the comments extracted per submission. I placed a constraint that a submission should at least contain 100 comments so that I have a big enough sample size for flair distribution conditional on the submission. Over 500 out of the 1000 submissions met this constraint.

Using the start_url, the spider begins the crawl. The parse() function is the default method called to handle the response downloaded for each of links in the start_urls. First, I extract the links pointing to comments page for each submission. As illustrated in Fig. 3, I utilize the SelectorGadget tool to provide me the CSS selector only for the comments and ignore other CSS selectors.

In the above request, I again utilize SelectorGadget to find out the CSS selectors for the submission title, score and username-flair mapping. I store the dictionary of unique users and their corresponding flairs as I am interesting in analyzing the flair diversity in the top comments per submission. Scrapy provides a command line argument to store the data in csv/json format for further processing.

The goal of data processing is to compute the following metrics for each submission:

The function compute_flair_stats() computes the percentage share per flair given the flair_map scraped for a submission using Scrapy. Using Python pandas library and above function, I fill two pandas dataframes, per_submission_metrics and per_flair_metrics that prepare the scraped data for analysis. Fig. 4 illustrates the structure of the two dataframes. 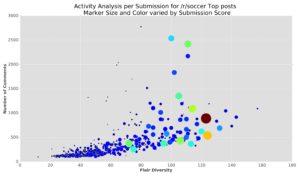 Fig 5. illustrates a scatter plot between the number of comments and flair diversity with the size of the bubble proportional to the submission score.

Expectedly, the flair diversity increases with the number of comments. Also, with increase in diversity, even for low number of comments, the submission scores are much higher. These might be posts for which the quality of the content is enough to generate the high scores and increased flair diversity for e.g. world-class goal by a popular player, live match discussion between top teams Real Madrid and Barcelona. To analyze this hypothesis, next, I dive deeper into the relationship between the different metrics and the type of submission.

I classify the submissions into three high-level categories:

I achieve the detection of Match Thread and Goal video submissions by applying the word_locate() and check_goal() functions respectively.

Fig 6. illustrates the distributions of the metrics based on the submission type.

Typically, the match thread discussions are mostly active during a live match and in its immediate aftermath. This results in the highest number of comments for Match Threads. In contrast, the submission score continues to rise many hours after the Goal submission is posted as they are rated on quality. Hence, the submission score is highest for goal submissions. We can observe even for the Rest category, there are quite a few outliers having a high submission score. These are typically news articles/tweets etc. transcending the interest of a particular section of soccer fans and appealing to a larger audience. 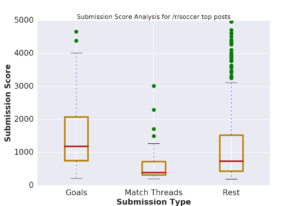 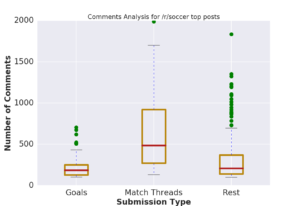 (b) Number of Comments 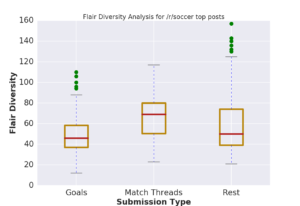 Last, I analyze the distributions of the percentage share of the different flairs across all the submissions. We observe that the leaderboard is dominated by the English Premier League clubs followed by the two Spanish giants, Real Madrid and Barcelona. Reddit being a predominantly English-speaking website and English Premier League being the most popular league in the world, this result is expected. 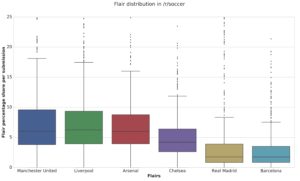 There are several directions in which my framework can be expanded. Few of them include:

In this project, I have scraped data from Reddit's soccer subreddit to analyze the user flair distribution across submissions and its correlation with Submission Score and comments activity. My results show that the metrics vary significantly based on the type of submissions and validate the popularity of English Premier League clubs in the subreddit.

The code for the project can be found here.

Strip Club Barcelona February 5, 2017
Thanks for the marvelous posting! I genuinely enjoyed reading it, you are a great author.I will be sure to bookmark your blog and will coje back later in life. I want to encourage one to continue your great posts, have a nice weekend!