Depression is a common form of mental illness that can lead to physical and emotional problems. It has been getting more and more attention in recent years base on the data collected. A number of factors may contribute to that, including efforts to reduce the stigma that surrounds mental health, increased availability and access to mental health resources, and the coronavirus pandemic creating or exacerbating mental health conditions for people around the world. The WHO has estimated that approximately 280 million people worldwide suffer from depression, and it is most commonly treated through therapy and/or medication.

It is widely believed that serotonin imbalance plays a role in the physiology of depression, which is why many treatments target this imbalance. Antidepressants are a type of medication used to treat depression, or major depressive disorder, as well as other conditions, such as anxiety, obsessive compulsive disorder, panic disorder, chronic pain, and even addictions.

Some main class of antidepressants are selective serotonin reuptake inhibitors, or SSRIs, which work by blocking the reuptake of serotonin so that more is available to the brain. They are commonly prescribed due to their high success rates and generic availability that makes them affordable for most patients. The most common side effects of SSRI's include nausea, headaches, drowsiness, diarrhea, trouble sleeping and sexual problems.

So we ask ourselves, why is this important?

Depression can often affect the entire body if left untreated or under-treated. It can increase the risk of adverse cardiac events, including heart attack or blot clots. Also, it can increase the risk of cardiovascular conditions like high blood pressure, and weaken the immune system, which leads to increasing stress on the body. All of these can lead to increased healthcare costs.

My goal was to analyze reviews found on webmd.com to find which SSRI had the highest reviewed effectiveness and compare their reviewed satisfaction and effectiveness based on the patient age, gender and condition being treated. I used the WebMD Drug Reviews Dataset on Kaggle that contains over 300,000 reviews collected between 2007 and March 2020. In addition, focusing on the five main SSRIs: Zoloft, Lexapro, Celexa, Prozac and Paxil. I thought this would lead to interesting insights since the effectiveness of these medications is subjective overall. 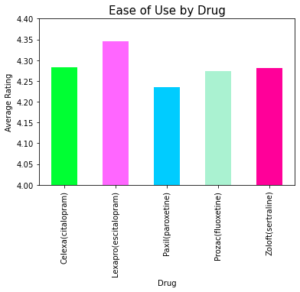 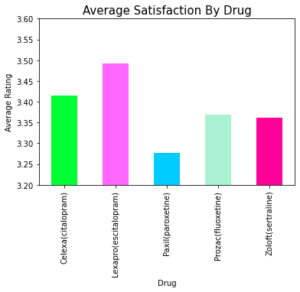 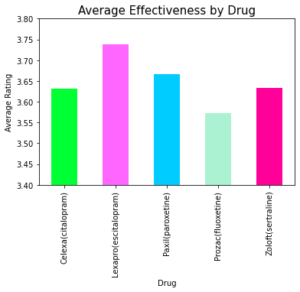 When comparing overall reviews of ease of use, effectiveness and satisfaction for the SSRIs to each other, the ease of use reviews were generally higher than their effectiveness and satisfaction ratings. That can be due to their once a day dosage, which is more manageable for most patients. Lexapro had the highest average ratings in each category. It also had better than average ratings for depression medications overall, which included depression medications in other classes. 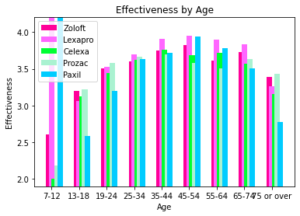 Moving on, I looked at the average effectiveness ratings for each age group that provided reviews. While the ages overall ranged from 7 to 75 or over, I don't believe the 7-12 age group reviews should be considered for my analysis for two reasons. First, many of these medications aren't recommended for this age group by the FDA. Second, these reviews were likely written by a parent or other observer and not the patient themselves; therefore, these reviews might not reflect the true feelings of the patients themselves.

Overall, average reviews seemed to be higher between the ages of 35 and 64, with Lexapro maintaining its lead, while Prozac seemed to have higher average reviews for aged 75 and over. Prozac also exhibited higher reviews in the 19 to 24 year old age group, giving another effective alternative for college aged patients.

When looking at reviewed effectiveness by gender, women seemed to leave higher reviews than men overall. This is useful information because depression is more common in women than in men. One of the reasons men have lower overall reviews could be that  some of the side effects, like erectile dysfunction, affect men in particular. However, more studies would need to be done to prove this correlation. 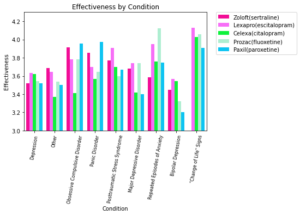 Finally, I broke the reviews up based on the condition reported as being treated. I included the conditions that had over 300 reviews each, and then grouped the rest into the ‘Other’ category. Depression had the highest number of reviews, as expected, based on the class of medications being examined, with Lexapro maintaining the highest ratings. Prozac had higher average reviews in patients with episodes of anxiety, while Paxil had higher reviews for anxiety disorder. Paxil also had higher average reviews for OCD or obsessive compulsive disorder, followed closely by Zoloft.

Clinical judgment is most important when deciding which medications to use for depression and other mental illness treatment. This information indicates that further research or clinical trials could be held to see if the positive reviews for Lexapro are maintained in a controlled environment. In the future, we could use this dataset to see which drugs are associated with more side effects and which side effects those are.

We could also see if there is a correlation between the average ratings of the drugs and whether they have reported side effects. Furthermore, we could expand to comparing the ratings of SSRIs with other antidepressants, such as SNRIs, TCAs and atypical antidepressants to see which class and which medications in particular have higher patient satisfaction.

I am a data scientist and PharmD with hands-on experience in healthcare and an interest in health analytics. I am highly collaborative and passionate about new data driven approaches to measure and improve health.
View all posts by Amanda Manfredo >