The skills  demoed here can be learned through taking Data Science with Machine Learning bootcamp with NYC Data Science Academy.

In an age when your only plans are to sit on your couch and watch the newest release on a Friday night, you might end up scrolling through too many data presented from streaming platforms before you give up and finally throw your remote across the room.

With endless possibilities at our fingertips, what we often struggle with these days is actually finding something to watch. Sometimes in the same amount of time it takes to pick a movie, you could have already been halfway through it. Indecisiveness and frustration has led to me shutting off the TV rather than flipping through different streaming services with thousands of movies in each.

It's even worse when you know what you want to watch and do a quick Google search just to see that you’ll have to pay extra because you don’t have the service it is offered on. For most, it is not feasible to have a subscription to every streaming service when you cannot possibly take advantage of everything they have to offer.

To limit disappointment, delay, and wasted dollars we should invest in the streaming platform that best caters to our needs.

To tackle this problem, I used a Kaggle data set containing 16,744 observations of movies offered on popular streaming services including Netflix, Hulu, Prime Video and Disney +.  My initial thought was to look through the different offerings and come to a conclusion of which is the optimal streaming service. However, there’s no way to pick the best one. Everyone will have their own optimal service based on their preferences. Therefore, I analyzed this data using R Shiny to create data visualizations that will allow the user to get a clearer idea of which service is best for them.

To start off, I used R packages dplyr and ggplot2 to create density plots of ratings on Rotten Tomatoes and Imdb across the platforms. According to rottentomatoes.com, they use a scale better known as the “The Tomatometer” which is based on the opinions of hundreds of movie and TV show critics and the website gives a number out of 100 which represents the percentage of positive reviews for the movie. If it is above 60%, the movie awarded a red tomato score or considered fresh status; below 60% is given a green splat and considered rotten status.

According to Imdb.com, their ratings are based on their millions of registered users who can submit a rating from 1 to 10 and the votes are then aggregated into a single IMDb rating. A weighted calculation may be implemented in order to preserve the authenticity of the rating.

It is important to note the differences in each service's density plot based on whether it was from a movie critic or a user based rating. Disney+ had the lowest ratings in Rotten Tomatoes, critic ratings, but also the highest on IMDb, user ratings. The opposite occurred for Hulu, having the highest Rotten Tomatoes ratings and one of the lower densities in high IMDb scores.

In addition, even though Prime Video has the highest count of movies, by both rating systems they come up on the lower end, indicating the quality of the movies might not be the best. This would be valuable to take into consideration when choosing a streaming service. Many people religiously check these sites before seeing a movie so your preference on whether you trust critic ratings or user ratings is necessary.

The next factor observed was the country of production for each movie. As shown below, I used Googlevis to create an interactive map that shows the count of movies each platform offers in each country. After choosing a service the user can hover over each country to reveal a count of the number of movies produced in that country. While these are U.S. based services so the largest concentration is the United States for all, the services differ in international offerings. Prime Video showed the largest number of movies produced internationally while Disney + offered very few. 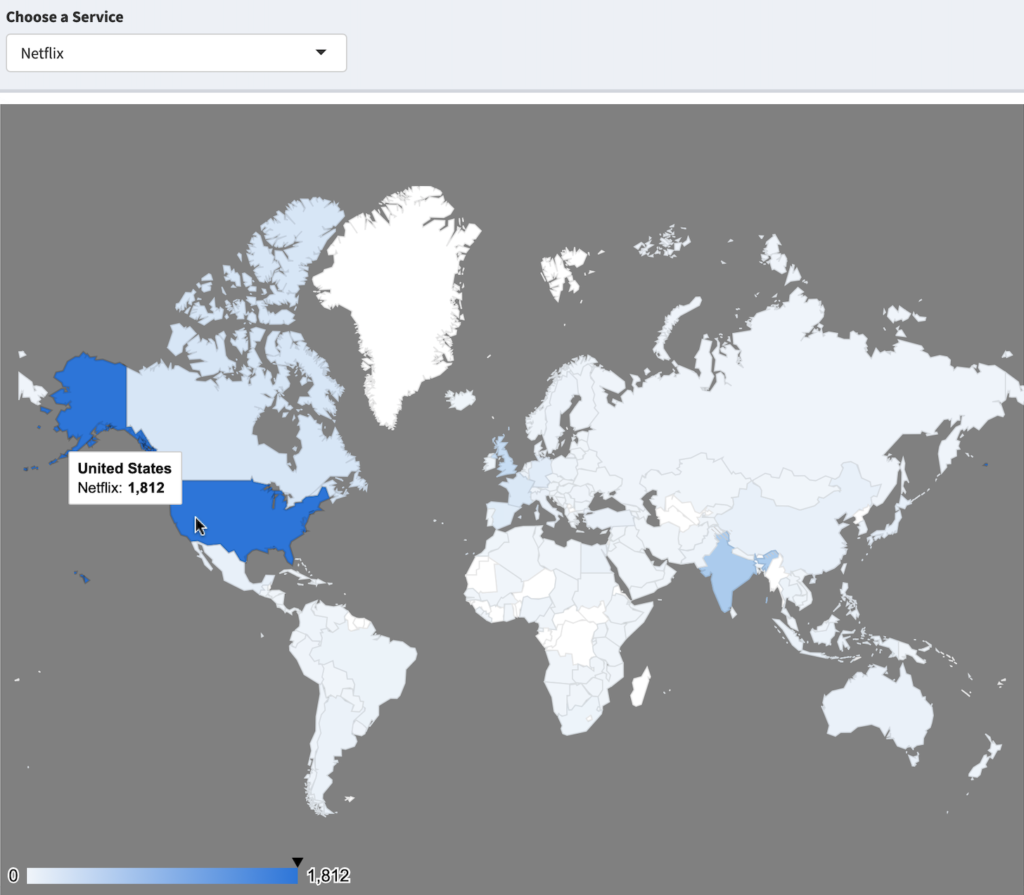 Moreover, to evaluate the age-based ratings given to movies on each platform, I used ggplot2 to create pie charts of the distribution across each service. Netflix's distribution shown below displays that about 50% of the ratings given to their movies were 18+ and about 25% were 7+ and all. Hulu and Prime Video's chart resembled this as well. On the other hand, the Disney+ pie chart showed that the majority of their movies are for a large audience and definitely the choice if you are looking for family friendly options. 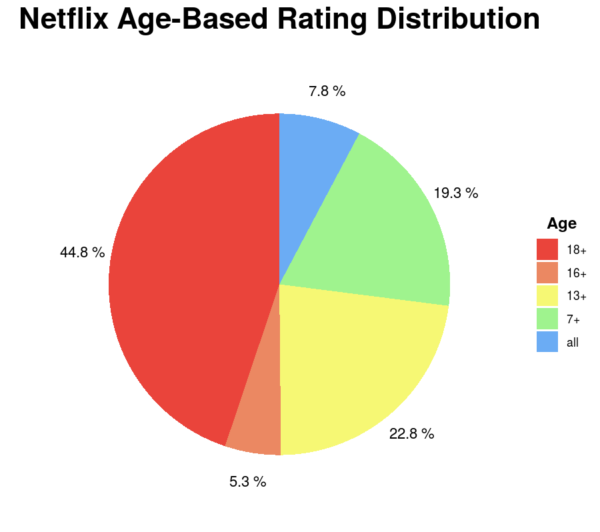 Lastly, to analyze the genres offered by each service, I used ggplot2 to create bar plots of the number of each service's movies in a certain genre as a percentage of that service's total movies offered. Using the selector input, the user can toggle through 27 different genres and see the percent each service offers for that genre. This can be especially useful for niche genres that do not normally have a large presence on these services. 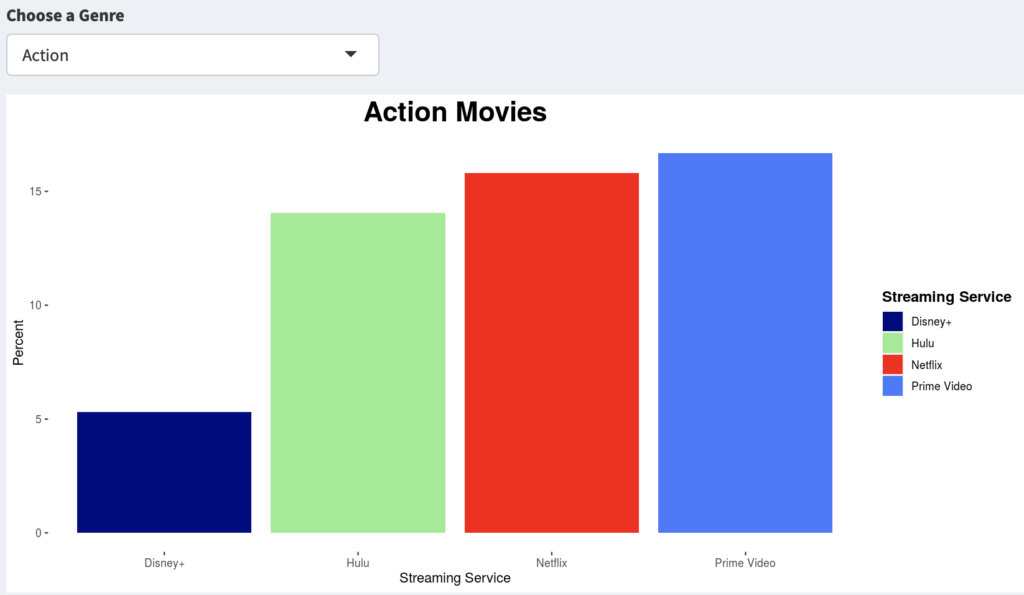