This visualization project will use data that has been collected by World Bank related to the School enrollment, secondary (gross), gender parity index (GPI). This post shows details on how data is loaded, cleansed, filtered and used to plot visualizations using ggplot2 and dplyr. The reshape2 library has also been used to convert data from the source into format that is useful for analysis.

The data that has been used for this visualization has been sourced from the World Bank Gender Data portal from the education section.  According to the data shared by them,

Data on education are collected by the UNESCO Institute for Statistics from official responses to its annual education survey. All the data are mapped to the International Standard Classification of Education (ISCED) to ensure the comparability of education programs at the international level. The current version was formally adopted by UNESCO Member States in 2011.

The raw csv file was opened up in a text editor, and as a preliminary step to data analysis in R, data that did not confirm to the csv format was removed. Specifically, some header lines about the column heading were removed. It was also determined that the column header had a missing field that led to issues during analysis. This was also taken care of.

The second file consisted of country information, specifically classifying various countries into specific regions and Income Groups. Data from both these files were joined together to enable categorization of GPI data based on region and income levels.

The data was difficult to use directly for R visualization. To perform visualization of the progress in different nations, GPI data that was organized as separate columns for each of those were converted to a melted form using the reshape2 package. This resulted in the generation of 12098 rows of observations of GPI data. 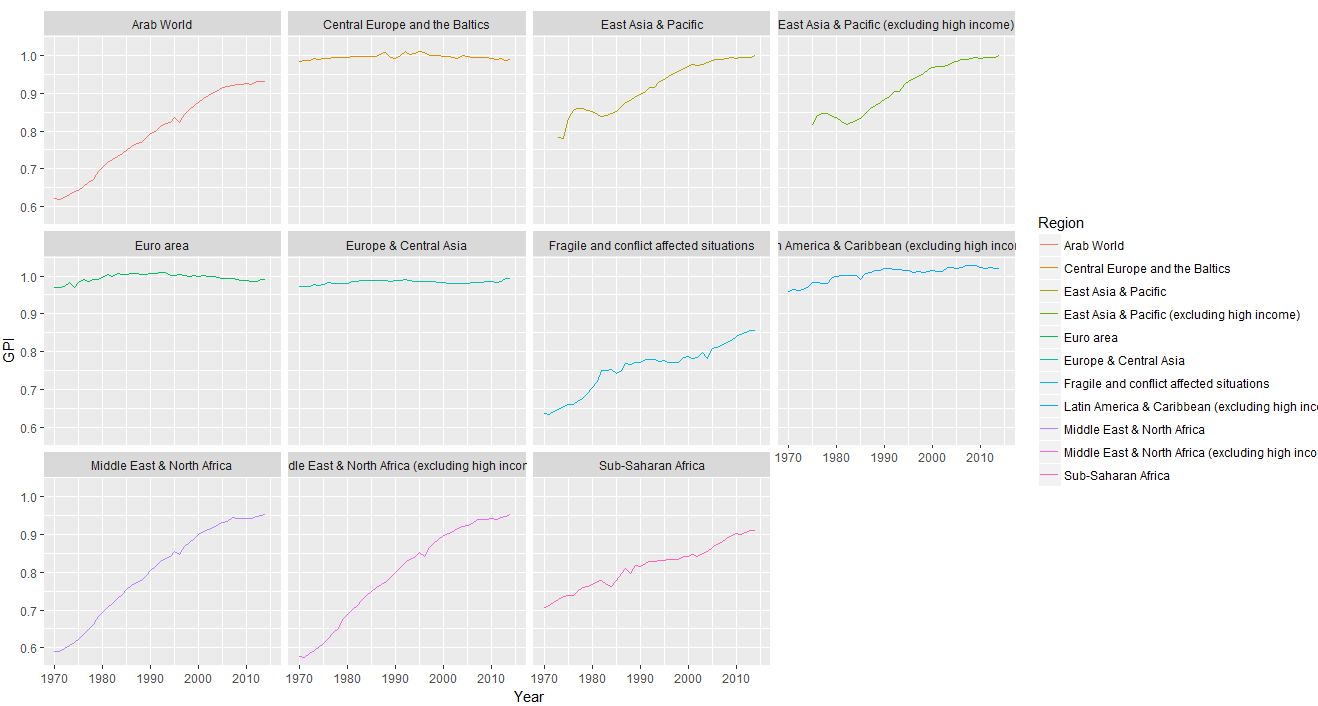 By performing an introductory data visualization, its clear that the global gender parity index for school admissions has steadily climbed closer to a point of equality (Ratio of 1.0) between the two genders. We can also clearly see that areas like Europe and Americas have had a good ratio from the 70s. The Arab, middle east and north African areas although historically at a low 0.7 GPI has in the recent past improved the ratio to 0.95. The conflict affected areas and the sub Saharan areas are still a concern as they have improved the ratio only to of 0.8.

Technology Enthusiast, with attention to detail, having global exposure. She is a self-motivated problem solver with experience analyzing data and deriving meaningful statistical information. Her goal is to be able to make a positive difference in peoples lives...
View all posts by Smitha Mathew >