Student Loans: a Subprime Time-bomb for the US Government?

Are Student Loans a Subprime Time-bomb for the US Government?

There is overwhelming concern among politicians, professionals, and students that the current student loan market may be the next soaring hot air ballon primed to run out of gas and collapse. For students facing rising tuition costs, increased competition among peers, and a still uncertain job market, they are concerned about whether they will have the ability to pay off the increasing amount of debt they have taken on in order to pursue an education believed necessary to stay competitive. On the other hand, the US government in the wake of the 2008 recession needed to get people back to work or at least back to school and increasing student loan offerings afforded a way to accomplish this goal. Although the current student loan market is only 1/10 the size the mortgage loan market, many articles have illuminated similar trends between the two claiming that student loans may be the next mortgage crisis, but are these headlines valid? In order to attempt to answer this question, lets first investigate some existing student loan trends... 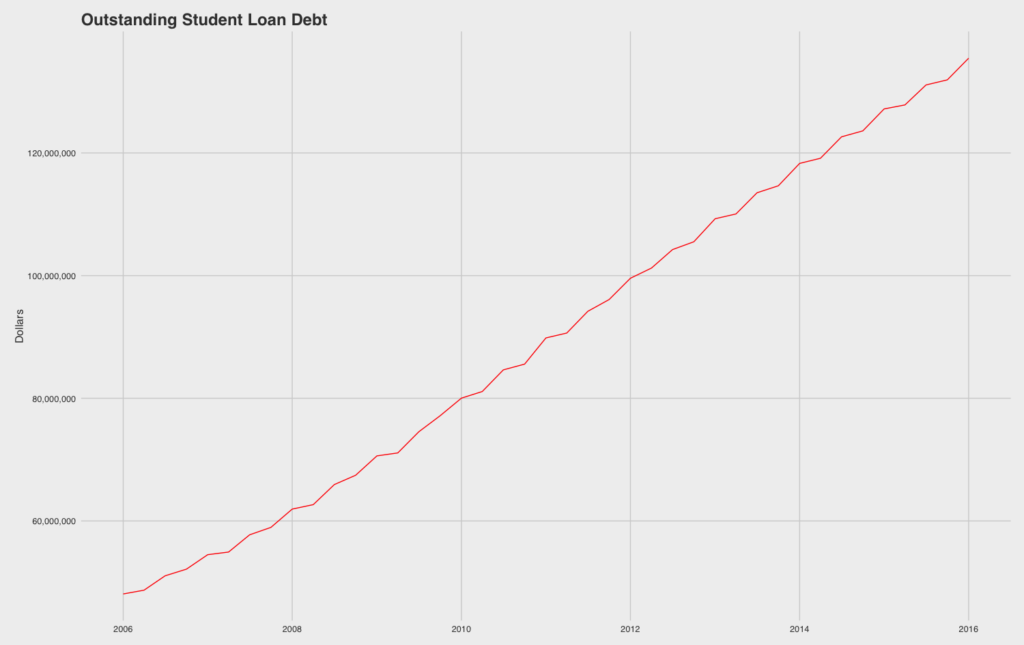 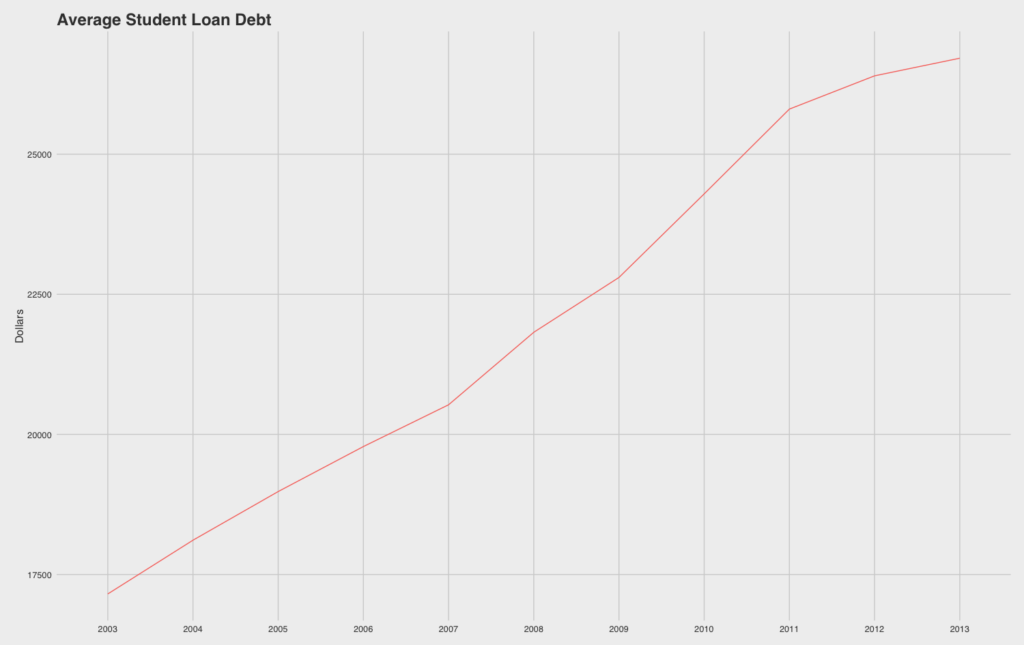 Most student loans are federal loans

90% of student loan debt in 2015 was comprised of federal loan borrowing. 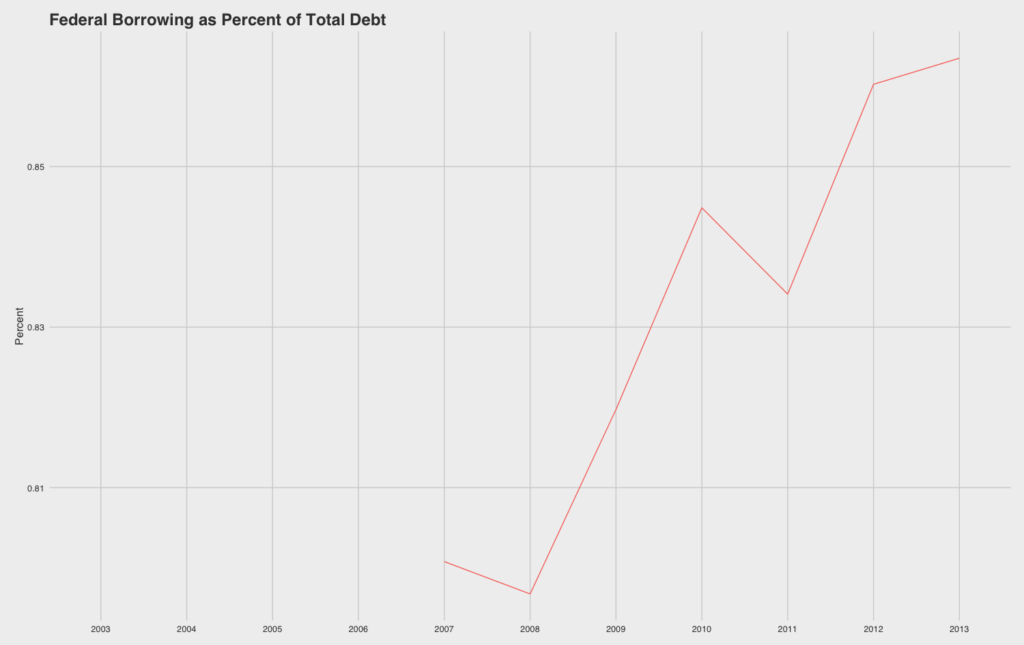 Student loans make up a large, increasing portion of the US Govt.'s assets 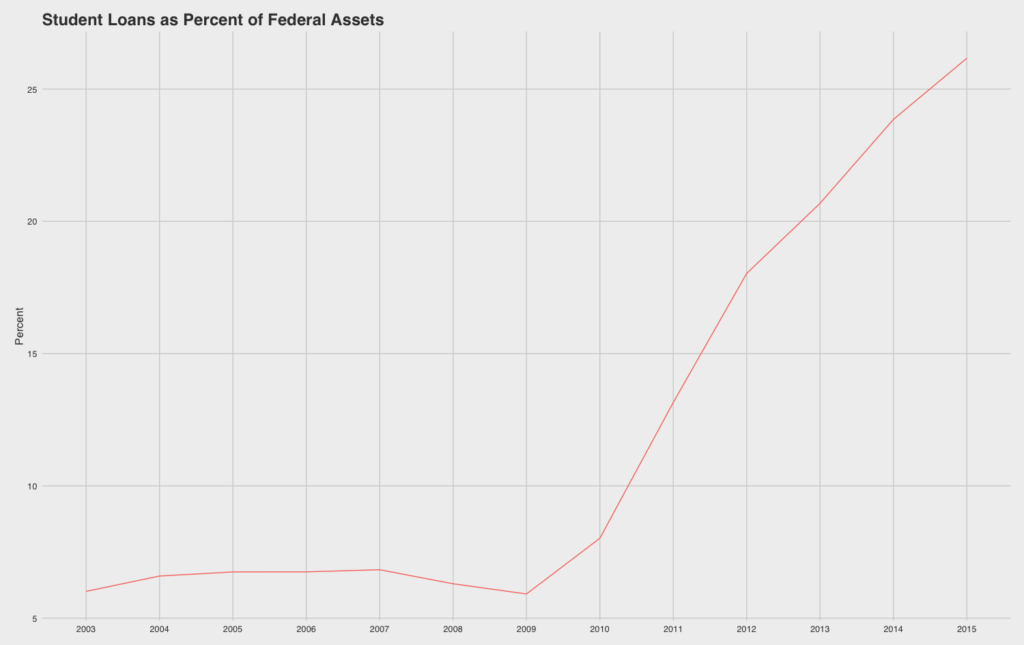 What changed in 2009/10 to prompt increasing student loans?

The Health Care and Education Reconciliation Act of 2010 was signed into law by President Barack Obama on March 30, 2010. Many people have heard of "Obamacare", which is the nickname this program took on, but what they may not know is that in addition to the major changes implemented in the Healthcare sector, this act also implemented some major student loan reforms as well.

Here are some of the changes that were made by President Obama:

It is highly probable that the increase in student loan borrowing was promoted by the 2008 recession and the ensuing high unemployment rate which prompted many to return to school, but the changes implemented by the Health Care and Education Reconciliation Act of 2010 allowed many people the means to return to school and consequently the government now owns 90% of all student loans.

Although unemployment rates have been stabilizing since the recession in 2008, an increasing number of graduates are still unemployed or underemployed. Underemployment includes three groups of people: unemployed workers who are actively looking for work; involuntarily part-time workers who want full-time work but have had to settle for part-time hours; and so-called marginally-attached workers who want and are available to work, but have given up actively looking. Additionally, the percentage of employed college graduates under age of 27 who were working in a job that did not require a college degree increased from 38 to 46 percent from 2007 to 2014 (Abel and Deitz 2014). 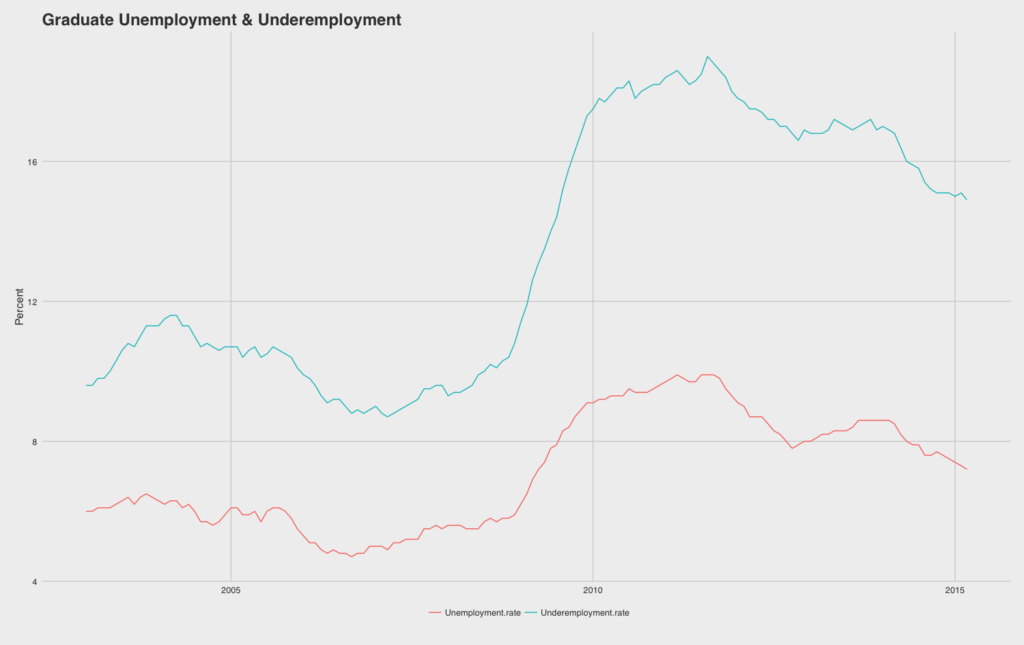 Data is for college graduates age 21–24 who are not enrolled in further schooling.
Source: 2015 EPI analysis of basic monthly Current Population Survey microdata

In addition to the large number of graduates who are unemployed or underemployed, initial young graduate earnings are not increasing along with increasing debt they are taking on. On average, young college graduates have an hourly wage of $17.94, which translates to an annual salary of roughly $37,300 for a full-time, full-year worker. This is a decline of 2.5 percent from what a typical college graduate would have made in 2000 ($38,300). 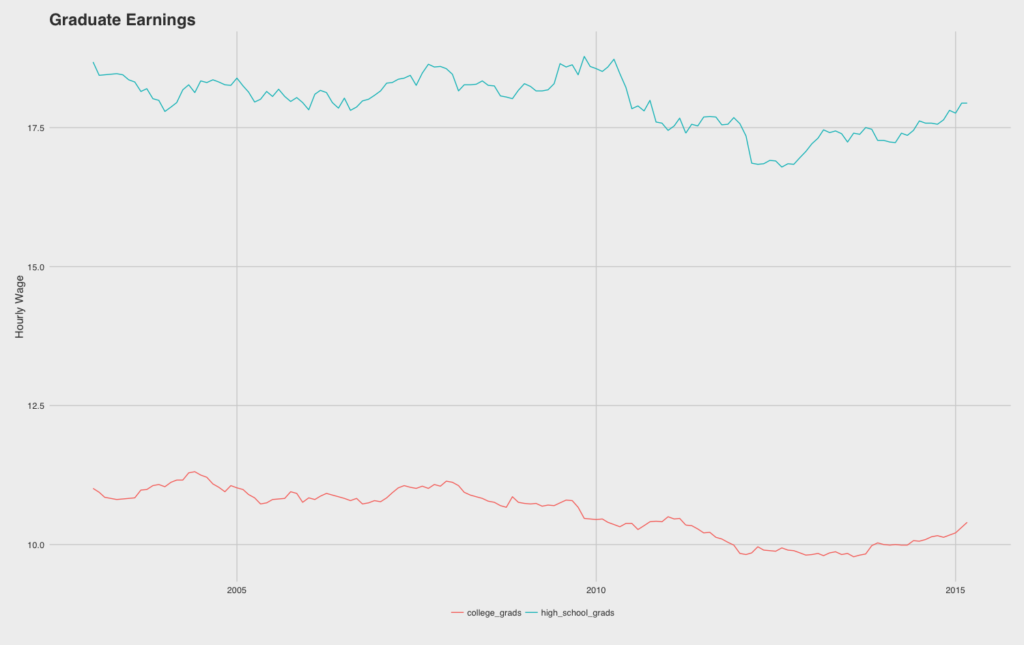 * Data reflects 12-month moving averages; data for 2015 represent 12-month average from April 2014 to March 2015. Note: Data are for college graduates age 21–24 who do not have an advanced degree and are not enrolled in further schooling, and high school graduates age 17–20 who are not enrolled in further schooling. Shaded areas denote recessions.
Source: EPI analysis of Current Population Survey Outgoing Rotation Group microdata
https://gist.github.com/sjstebbins/82546f09b7d2441ac4171a6ebd7ccdeb

Between 2003 and 2013, the average cost of attending college increased over 30%. This rising cost of college combined with the failure of wages to grow for young college graduates signals that a college education is becoming a more uncertain investment. Universities have taken advantage of the influx of students and their accessibility to loans and have increased tuition at a rate that far outweighs unemployment recovery and graduate earnings, signaling that college is becoming an increasingly difficult investment. 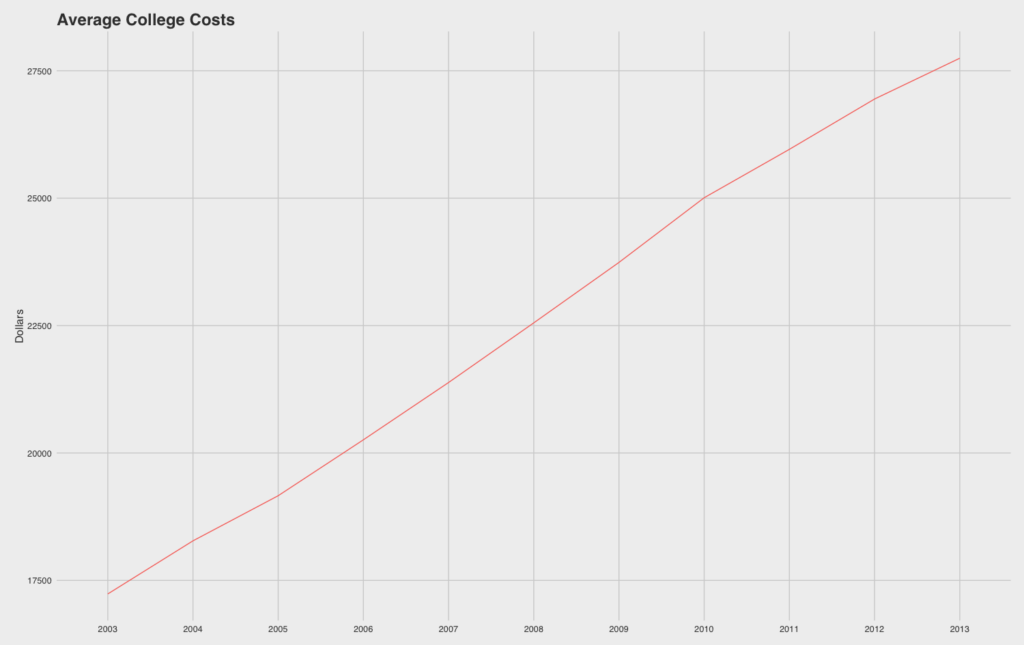 Student loan default rates have decreased over the past few years, but have remained fairly high as the number of loans granted and outstanding total debt have increased dramatically. Although decreasing student loan defaults should be a good indicator that graduates are able to pay their debts, is this really enough to mitigate all the other trends that support the claim that a student loan bubble may exist? 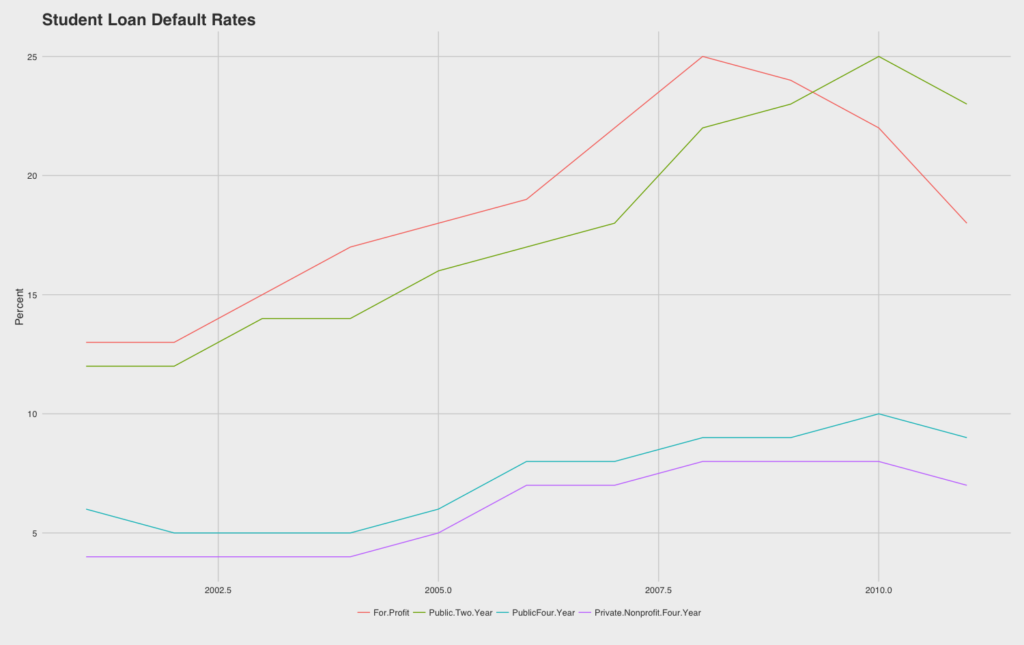 Although student default rates seem to be decreasing in recent years, there are an overwhelming number of factors that support the claim that student loans may be a subprime bubble. Lets restate these trends:

Furthermore, the U.S. Govt treats these federal loans as if they are triple AAA rated, increasing their portion of total US assets to nearly 30% in 2015, yet they require no credit check on borrowers. Yes, the statistics show that college graduates earn more compared to those who do not graduate college, but the only way to access this college premium is by completing a college degree, but of the 66 percent of young adults who began college, 37.5 haven’t completed their degree by age 27 (BLS 2014) Additionally, the percent who graduate has not increased alongside increasing tuition costs and consequently the average amount of federal debt each student takes on and this trend only seems to be continuing. Finally, the Health Care and Education Reconciliation Act of 2010's income based payment plans have made it easy for students to pay back the bare minimum of this loans and these loans are entitled to be forgiven after 20 years.

So are student loans a subprime bubble? Besides a sudden, minimal decrease in default rates, the rest of these trends do not bode very well for the ever increasing asset line of the U.S. Govt, but I'll let you be the judge...

Google January 24, 2020
Google We prefer to honor a lot of other world wide web web pages around the net, even if they arent linked to us, by linking to them. Under are some webpages worth checking out.

韓國首爾親子自由行 November 22, 2017
In the present, Woo-bin is a top actor-singer in Korea while Suzy is a documentary producer.

Top PR agency November 3, 2017
Since 2013, LOST has been cooperating and collaborating with various brands and organizations to host their team building events.

食齋 October 7, 2017
Back with a vengeance, they are almost literally munching on any little critter they can get their hands on.

test May 16, 2017
Thankfulness to my father who informed me regarding this website, this weblog is in fact remarkable.

simcity buildit free simcash May 8, 2017
Completing the offers that make sense is often a good way to get additional money.

aa raha hoon main lyrics April 10, 2017
Asking questions are really pleasant thing if you are not understanding something entirely, however this post presents fastidious understanding yet.

bracciali uomo cartier imitazione January 19, 2017
cartierlovejesduas Having just finished a degree I never had any issue with using LibreOffice (on Ubuntu Linux, either 10.04 or 12.04) to write my essays etc. (and Zotero to do all my bibliography formatting) and sending MS Word files, or PDFs (as appropriate). In fact, I was complemented a number of times on my excellent referencing! I didn't say that it wasn't me, it was Zotero. bracciali uomo cartier imitazione http://www.migliorecollana.net/

Student Loans: a Subprime Time-bomb for the US Government? - Launchship November 19, 2016
[…] Contributed by Spencer James Stebbins. He takes the NYC Data Science Academy 12 week full time Data Science Bootcamp program from July 5th to September 22nd, 2016. This post is based on their first class project – the Exploratory Data Analysis Visualization Project, due on the 2nd week of the program. You can find the original article here. […]

Student Loans: a Subprime Time-bomb for the US Government? - November 19, 2016
[…] Contributed by Spencer James Stebbins. He takes the NYC Data Science Academy 12 week full time Data Science Bootcamp program from July 5th to September 22nd, 2016. This post is based on their first class project – the Exploratory Data Analysis Visualization Project, due on the 2nd week of the program. You can find the original article here. […]