Data shows purchasing a house is generally a task that requires research and compromises to find one that fits the right budget and is built with certain desired features. As a team, we entered the House Prices: Advanced Regression Techniques Kaggle competition to exercise our machine learning skills. The competition entailed predicting housing prices in Ames, Iowa.

In this post, we detail our process as we work through the data with Python, constructing various regression models with the Sklearn package with the goal of optimizing our prediction score.

To build a successful model, one must first understand the data. We evaluated all features one by one to determine which would need to be manipulated in our data preparation step.

We first looked at our response variable, Sale Price, which appeared to have a right-skewed distribution. Given that the data is continuous and linear models work under the assumption of normality, we applied a log + 1 transformation to normalize the distribution.

There were 34 features total that had missing values in the training and test set combined. Due to the fact that missing data could be random, skewed toward one level of a variable, or signify a value, we were careful to evaluate each feature. 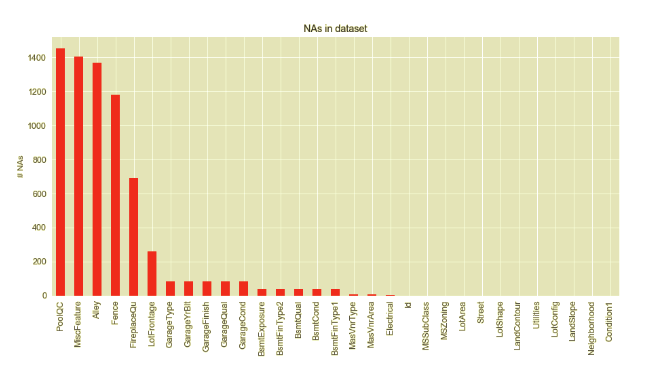 Most commonly, missingness represented a zero value, the lack of the feature at a residence. This was true for Fireplace Quality, Basement Quality, Garage Condition, Pool Quality, etc. These were usually filled with a value such as “NoFireplace”, “NoBasement”, etc.

In cases where there was a very low percentage of missingness, we evaluated according to the rest of the data and outside context. For example for the “Electrical” feature, there was only one value missing and the vast majority of houses were categorized under standard circuit breaker, so the missing value was categorized under the majority as well.

For Lot Frontage we used k-nearest-neighbors (kNN) to fill in the missing values given that we could not assume that Lot Frontage was something that did not exist. The kNN method would also be taking into account an average of all the features. We conducted a grid search to find the best value for neighbors (k) by looping through and evaluating the negative mean squared error (-MSE) at each level of k.  After evaluating we tuned the model to k = 14. 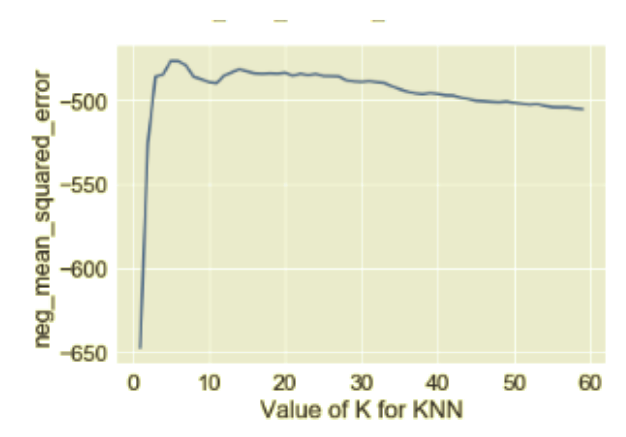 While performing EDA we identified categorical variables to find those with a clear relationship to the output variable, Sale Price, and then used target encoding to change the category to ordinal.  One example of this type of variable was MSZoning. In the boxplot below showing MSZoning vs Sale Price, it’s clear that there is an order from FV (Floating Village Residential) to C (Commercial). We therefore assigned numbers to the ranking found in the below boxplot and also combined RH (Residential High Density), and RM (Residential Medium Density) into one since these were similar. 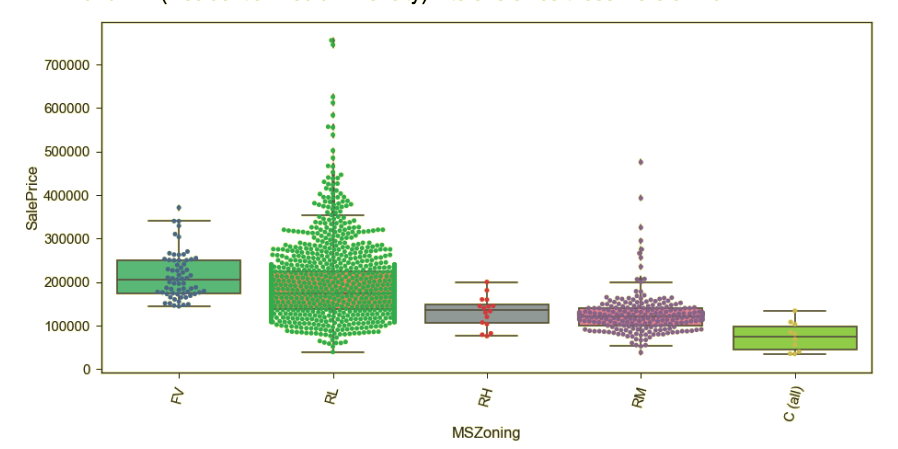 When looking at the relationship between GrLivArea (Above Ground Living Area) and SalePrice, we observed four outliers that were distant and not in line with the other observations. All four outliers were greater than 4,000 square feet in above ground living area. The two that we ended up removing also had an abnormally low sale price. These were removed as they did not follow the general linear trend of the data, and removing these points helped to improve our prediction score. 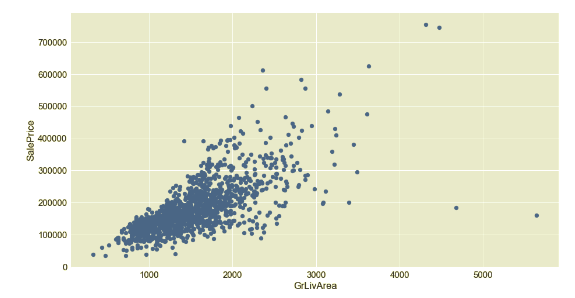 Given that normally distributed data is a key assumption underlying many machine learning algorithms, we evaluated the skew of our our input variables alongside our output variables using the skew function in the Scipy package. We determined a threshold of 0.75 and applied a log +1 transformation to all features above the determined threshold to reduce skew.

Multicollinearity in the data needs to be addressed given that multiple regression models assume that independent variables are not highly correlated with each other. We approximated for this through building a correlation matrix. 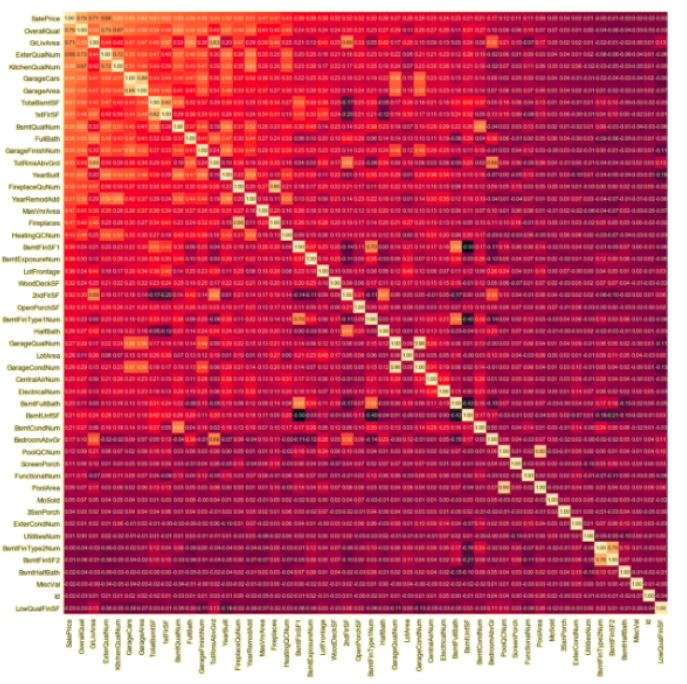 Overall, we removed 21 features from the dataset.

We created two additional features for our dataset based on contextual understanding.

Several modelling methods quantitatively rank features, an output which is very useful in providing a clear and interpretable understanding of which features in our dataset are the most important.

We examined feature importance via two methods, Lasso Regression and Random Forest, while also trying out Principal Component Analysis (PCA) to reduce the dimensionality of all features used.

Lasso Regression applies a regularization term to the modeling algorithm which reduces the size of the coefficients in a regression equation, eventually reducing to 0 the features deemed least important to the algorithm.

We optimized the regularization parameter alpha of our lasso regression through a grid search via the LassoCV function in the scikit learn package. The absolute coefficients of variables in its output represent the most important features. 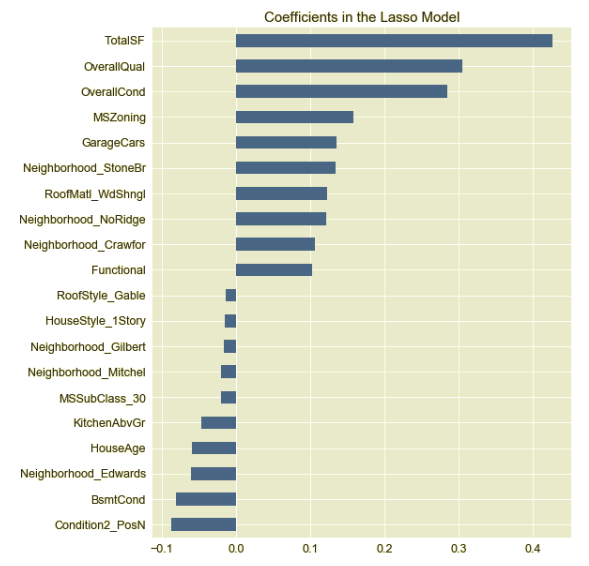 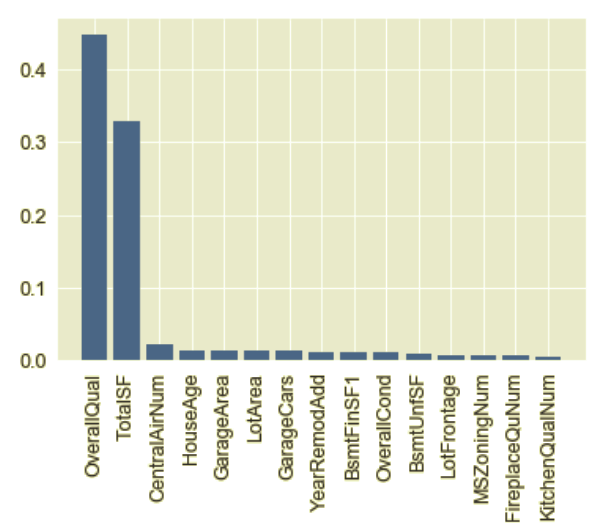 In both the Lasso and RandomForest outputs, we saw that OverallQual and TotalSF popped as the top two most important features.

Lastly, we tested applying Principal Component Analysis (PCA) to our dataset for dimensionality reduction, but did not apply the results in the end given that the independent variables after applying were not interpretable.

PCA works by rotating the axes so that features are reduced to the best combinations together. Below is a plot of our results: 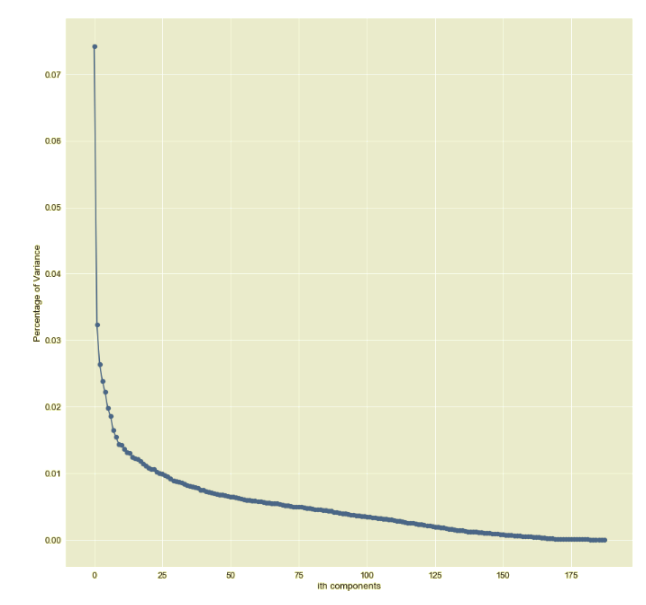 There is a clear elbow, a flattening of the negative slope, at approximately 10 components, demonstrating that via PCA, the majority of the variance of the dataset can be condensed into 10 features.

We used 10 fold cross validation on the training set and tested several different models and combinations. Initially, we tested both linear and non-linear single models. For linear models, we tested Lasso, Ridge, and Multiple Linear Regression, while the non-linear models tested were Support Vector Machines, Random Forest, and XGBoost. The hyperparameters for each model and their cross validation scores are outlined below.

For single model selection, we obtained the best results with the Support Vector Regressor using a radial kernel.

To improve results, we also tested ensembling and stacking methods. Ensembling entails averaging predicted y values from different models. Stacking uses machine learning models to perform regression on predicted y values from different models. The below chart outlines the top five stacking or ensembling submissions as well as hyperparameters that were used and the score we received from Kaggle. 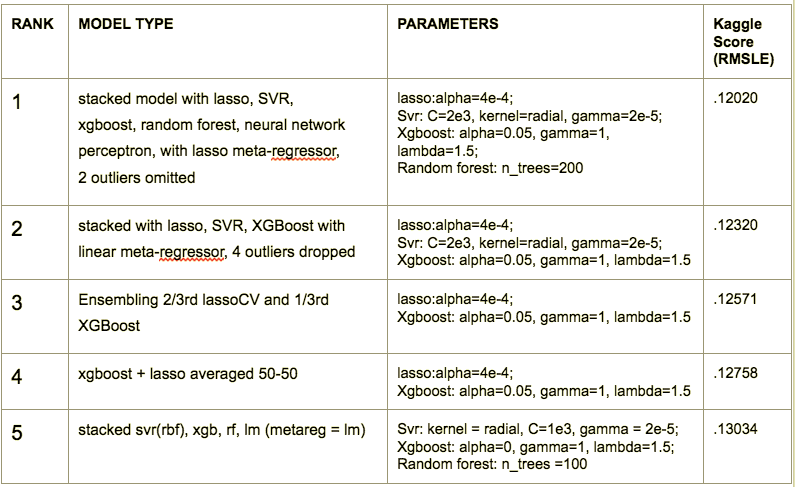 Our top model was a stacked model using Lasso, SVR (rbf), XGBoost, Random Forest, Neural Network Perception, with a Lasso Meta-Regressor. The chart below visualizes our best model’s predicted price vs. actual on our training set, since the test set did not contain the Sales Price data. 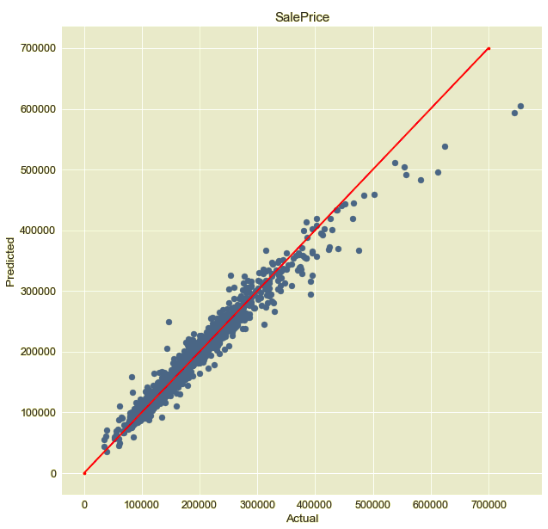 While our best model fit relatively closely for most homes, as sales price increased beyond $350,000, the error increased as the model consistently under-predicted the sales price.

View all posts by Dragos Ilas >

View all posts by Gurminder Kaur >