Exploratory Visualization and Shiny Project - You will build an interactive Shiny application that can create visual representations of data insights and trends.

INTRO: This was the first project I did at the NYC Data Science Academy (Fall Cohort 2018). I browsed my way to https://data.gov.tw/ where they store a large variety of publicly shared data. I wanted to select a data set suitable for charting and mapping purposes. I also preferred to work with data which I had to translate from Mandarin Chinese into English, that is, data that might be less accessible to people who are not fluent in Chinese.

It was here that I found my project: transforming the raw voting data of Taiwan presidential elections into something visually appealing and informational as to present numerical data in a more engaging way. The votedata.zip file that I used is available at http://data.cec.gov.tw/選舉資料庫/votedata.zip

BACKGROUND: The two main political parties in Taiwan are the Democratic Progressive Party (DPP) and the KuoMinTang (KMT). They have each won 3 elections in Taiwan's young democratic history. There have only been a total of six presidential elections that have taken place in Taiwan since 1996, and just like the United States, elections are held every four years with two-term limits. For each of these six election years there were five .csv files named elbase, elcand, elctks, elpaty, and elprof.csv. Each of these files contained specific information regarding each election, from district codes and candidate information to ballot totals and voting statistics.

raw data from the votedata.zip file

The files came without column names and were only decipherable by finding the key from GitHub user MISNUK at https://github.com/MISNUK/CECDataSet/blob/master/RawData_Format.md 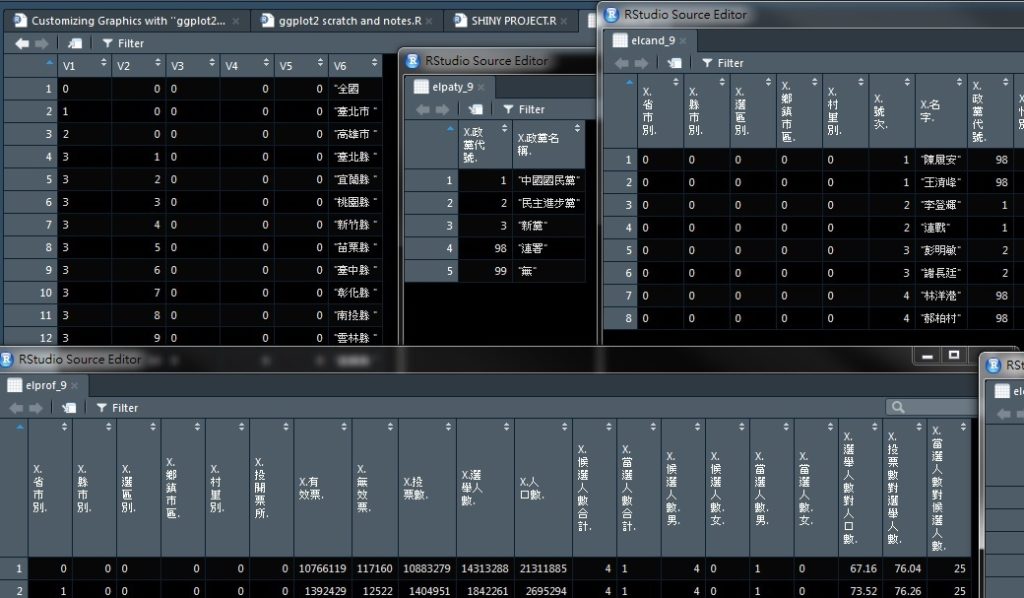 I used mySQL in order to create table templates to load the raw data into, then I used R to clean and combine the data. Tidyr's unite() and spread() functions came in handy here to combine the candidate names with their political parties as a column header (element), and then to have the received votes as the value (value). 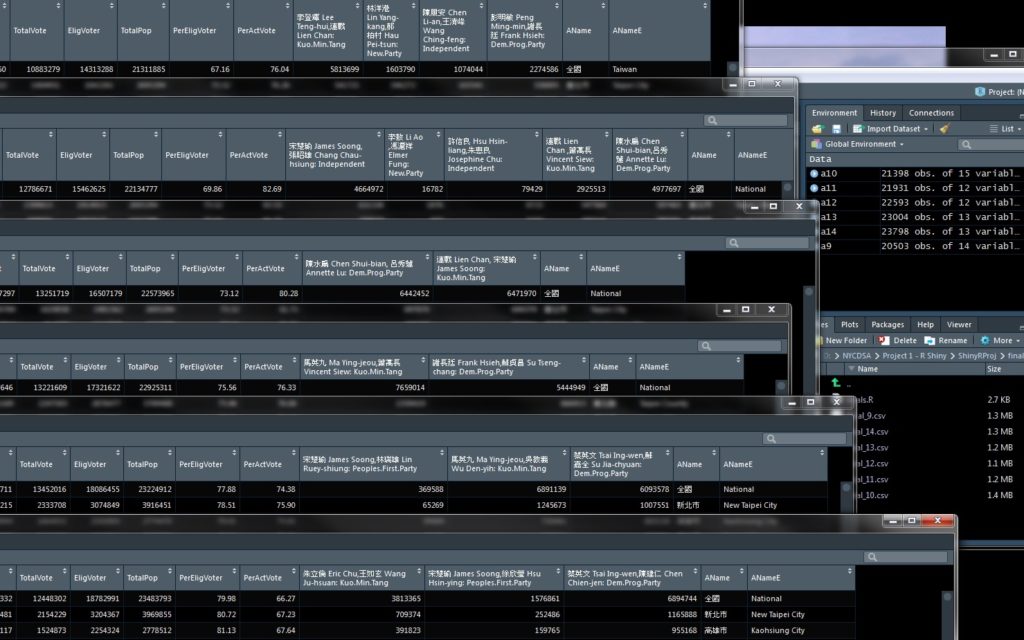 After creating final version charts for each of the six years that constituted the data which I was going to use for my project, I then proceeded to turn this data into charts, maps, and statistical information.

CHARTS: Once the data was coherently sorted in tables, the actual charting of the data became pretty straightforward. My only decision here was which categorical selections to allow for visitors of my project. I decided on two different versions of the same chart, one allowed users to select different districts in Taiwan to compare them on a single election year (different districts for a certain year).  And a second chart compared a single district over time, which allowed users to select multiple years to compare a single given area to itself. 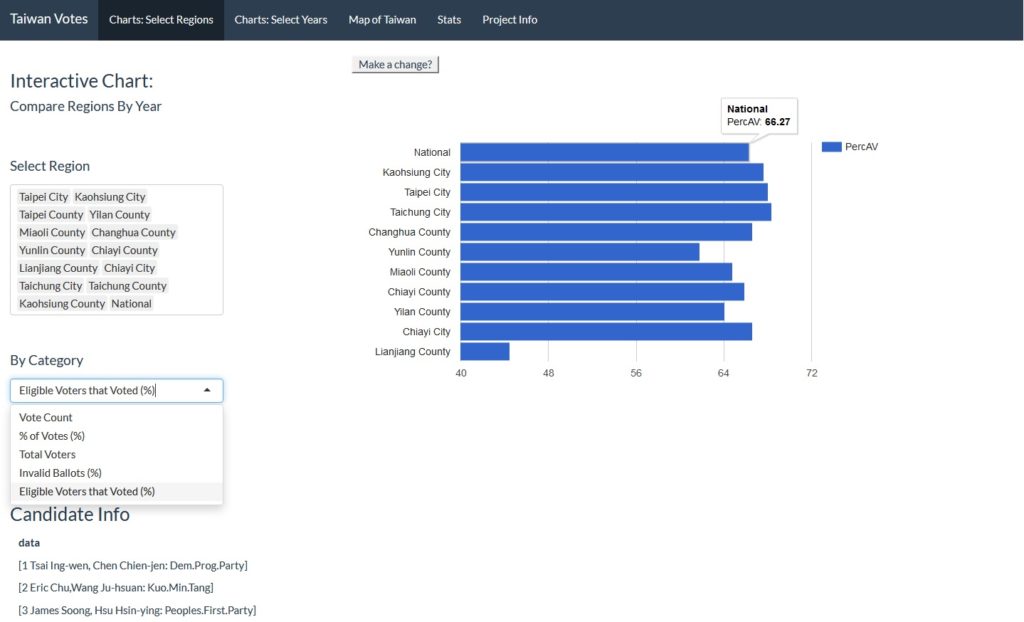 comparing multiple districts in 2016, the category selected is the percent of eligible voters that actually voted (PercAV) 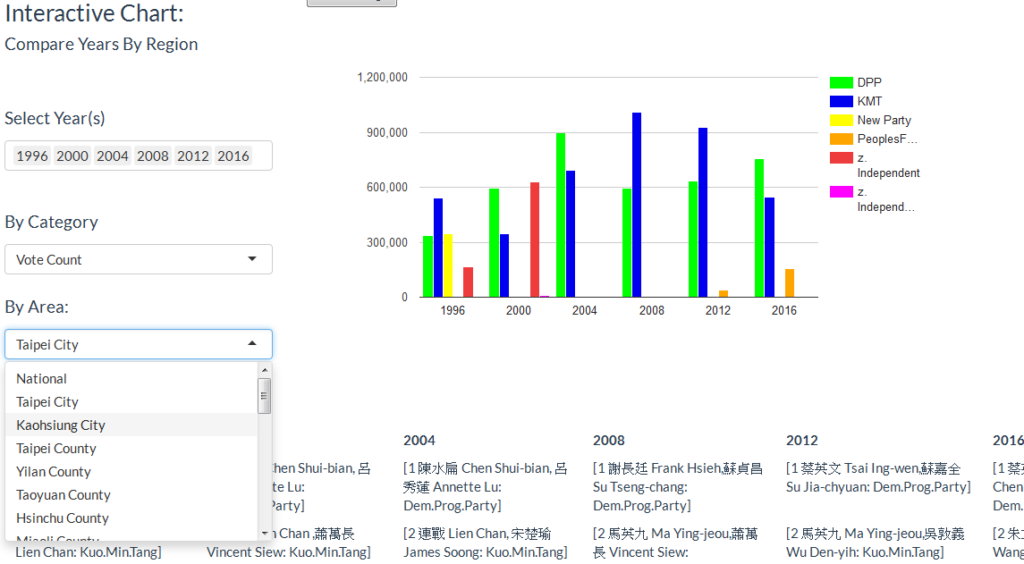 The charts that I used were gvisBarChart(), gvisColumnChart(), and gvisComboChart(). The candidate information section below the charts is loaded as a table and populates depending on which years are selected. The gvisComboChart() I used in the "Select Years" chart to add a mean average line on certain categories where such a line would allow more meaning to be construed from the chart. 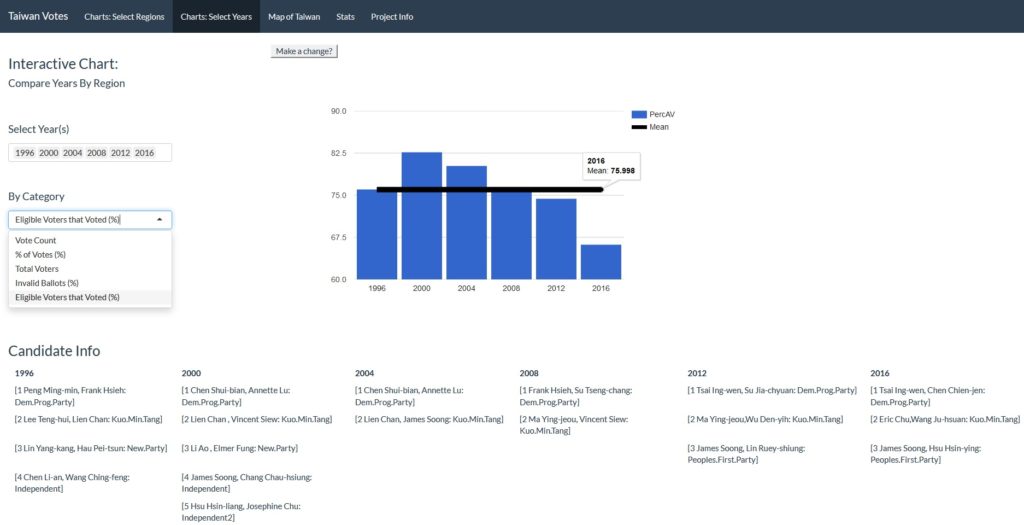 gvisComboChart() showing an average of 75.998% of eligible voters that actually voted (PercAV) throughout the 6 elections

The question that calls out to me when I look at this chart is: are any of these results statistically significant in any way, and if so, how can I use R to compute these statistical differences?

STATS: I added a stats section where I performed t-tests, correlation plots, box plots, and a Chi-Squared Residuals plot.

There was one year in 2004 where the DPP and KMT each held 50.11% and 49.890% of the vote, respectively. I wanted to see if the true difference in these two means was equal to 0 (Null Hypothesis H0). To test this I used a Two Sample T-Test and tested the average vote of the 25 total voting regions (n=25) for each of the two parties.

The p-value came back as 0.07566, which was not significant enough for us to reject the null hypothesis that the true difference between these two means was zero.

I'd like to finish the stats section by showing these two boxplots for the KMT and DPP political parties. 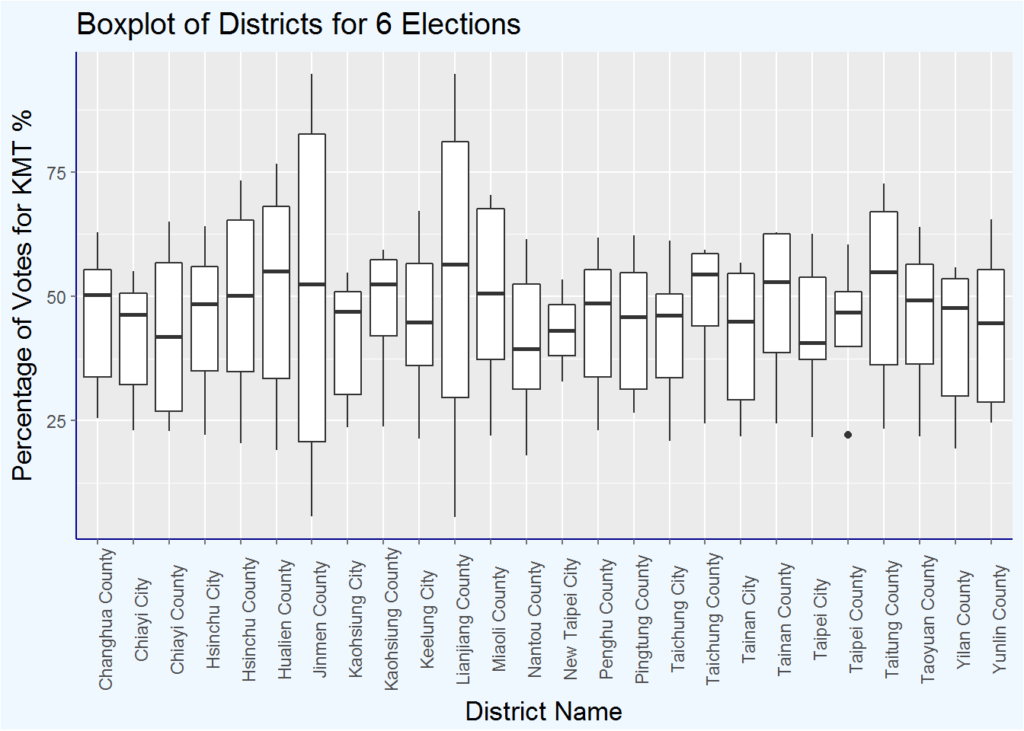 boxplot for KMT votes over 6 elections 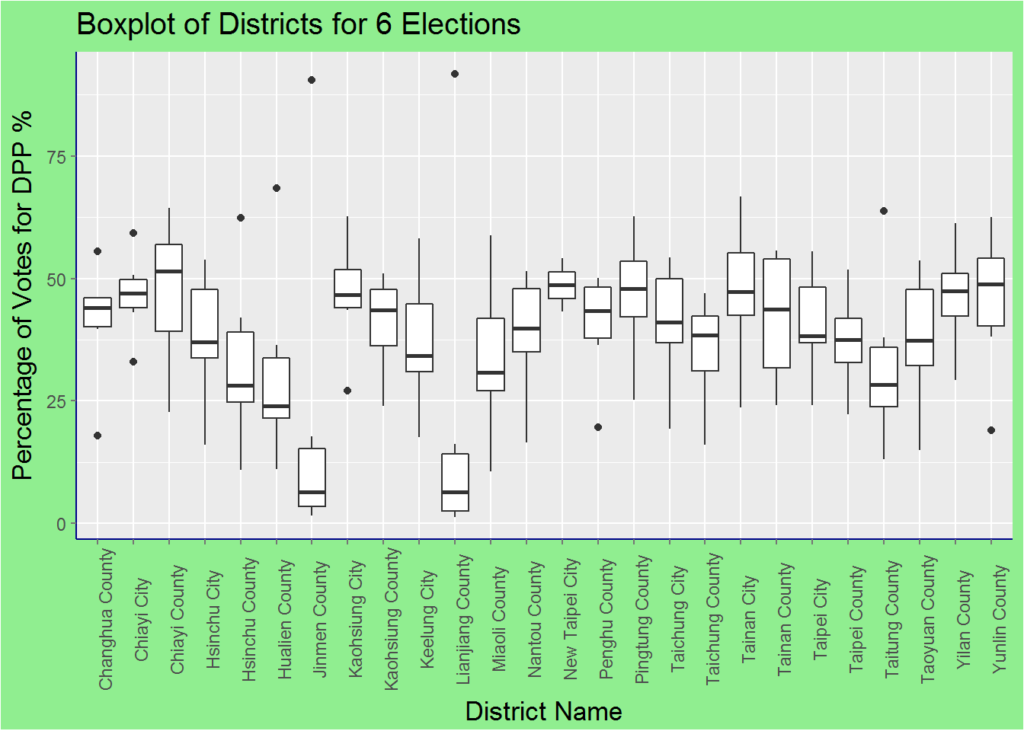 boxplot for DPP votes over 6 elections

I think that two districts that stand out in these charts are Jinmen County and Lianjiang County. So I would like to show you these regions on the Maps that I created.

MAPS: Compared to Taiwan being off the south west coast of China, Kinmen (Jinmen) and Lienkiang (Lianjiang) Counties are right on the coast of China, so their voting differences can likely be explained geographically as well as demographically by their small population.

I used leaflet (renderLeaflet() ) to create a choropleth map of Taiwan. I know that some of you audience members out there might not know the exact location where Taiwan sits on the Pacific Ocean so I blew it up for you in the maps. I also especially like my large mini map.

OUTRO: Overall it was a very fun project which I enjoyed working on and I hope you have time to look at it. There were some troubles using Chinese characters in my project as certain characters would kill the entire graph or render the code unreadable when uploaded to Shinyapps.io. Also, I'm guessing that throughout different administrations the vote data was compiled by different people or departments which led to there being discrepancies in data (a few values were just outright wrong).

I tried to make everything as interactive as possible while maintaining a certain level of visual appeal. I hope that this project was informative and educational. Thanks!

The actual project can be visited at https://taipeifx.shinyapps.io/twvoteprojectshinyr/

For actual code, all my work is stored at my GitHub https://github.com/taipeifx/vote_data_TW