I was born and raised in India and moved to Canada when I was 19. Canada is one of most developed countries in the world. It is a sparsely populated, mature developed economy, mature democracy and a vibrant mix of different ethnicities. India, on the other hand, is a one of the most densely populated large countries in the world and one of the fastest growing major economies. It is also a young democracy and a young nation. Among other things, how these two nations saw the outside world left a marked impression on me and I always had a desire to investigate it further.

Viewpoints, I believe, are shaped as much by the information sources consumed by an individual as they are by priori believes. Our opinions, event knowledge and event interpretation are shaped by what we hear and read. These believes drive us to seek information with a particular bias creating a feedback loop. People with specific believes congregate and start forming (sub)cultures that start seeing the world through their own lens.

It is explainable when two nations on the opposite ends of majority of World Bank tables hold very different viewpoints about outside events. But it becomes perplexing when contrasting interpretations of real world events are held by people living in the same city, those living in the same neighborhood or ones living in the same household. Our lens is defined by whichever information loop we get stuck in. Seeking sources that invalidate our believes generates cognitive dissonance, and seeking sources that validate them stokes our ego via confirmation bias. News organisations are one of the strongest loop propagating mediums and are a perfect source for anyone looking for belief validation.

Being a budding data scientist in training, one simply cannot make statements without attempting to test their validity. As part of this project, I looked at different news sources and tested to see if they systematically bias news reports tried to measure it algorithmically. Questions I was trying to answer: Are there measurable differences between how events are covered by different news organizations? Do different organizations communicate a stronger positive or negative sentiment? Are they talking about different subjects and different people? As we shall see below, answer to all these questions is yes.

Given a short project completion time frame and limited resources, I selected my news sources where there were known biases. Further, I chose Donald Trump as the principal object and analysed news article that mentioned his name.

On the advice of my TA and other people, I narrowed down the scope of the project to a few simple questions. (1) Find outlets that have opposite biases from each other. (2) Identify the sentiment they are communicating in the articles. (3) Find out what events and people they are talking about in conjunction with Donald Trump. I chose CNN and Fox as two organizations with opposing biases. Reuters was chosen as the neutral source. Please keep in mind that the main purpose of the project was to scrape data, clean it and present it graphically. This was not a statistical measurement or benchmarking of biases. I decided to take on the NLP portion because I was able to complete the scraping part ahead of schedule.

Project code is parked here. Spiders were deployed in the cloud and scheduled to run every 8 hours. Scraping -

This a sample JSON file that includes the original article and NLP API responses from both the sources.

As stated earlier, for the purpose of this project I narrowed down the analysis to a few specific questions. Let’s go through them one by one. Articles were only scraped for a period of 1 week and all the analysis represents that period. 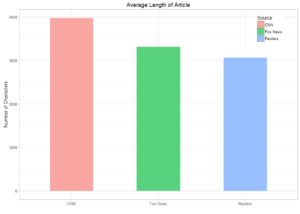 I hypothesize that the articles written by Reuters are factual representations of actual events without any commentary or background and hence shorter that other sources. Many of the articles found on Reuters RSS feed represent pure reporting of events.

CNN articles tend to have a lot of html tags embedded in them. The lengths of the articles is calculated after removing these html tags.

How does the sentiment of different news sources compare to each other? 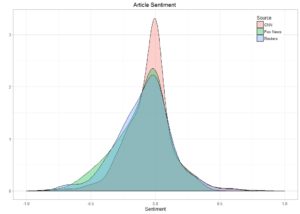 NLP sentiment analysis algorithms can classify if the attitude of the writer is positive, neutral or negative.

News sources generally tend to rely on large number of negative stories and some feel good stories to sell themselves. Articles not using either usually fail to sell.

This can be clearly seen when we compare the sentiment of stories published by all three sources. Stories are centered close to the middle but with a negative skew.

How does the magnitude of sentiment compare? 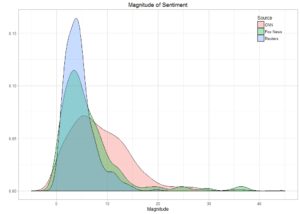 We see a fairly stark difference here. We saw in the last chart that overall sentiment of CNN articles is centered around the middle with a negative skew. The chart on right shows that whatever (negative) sentiment CNN is expressing, is being expressed forcefully. This means that they are writing opinionated articles.

Fox News comes in on the second place followed by Reuters. Articles from Reuters on average, do not express strong opinions which falls in line with the original hypothesis of factual reporting.

What entities and topics are news sources covering?

NLP algorithms can extract proper nouns (entity) from a given text. Main entity of an article can be defined as the object of an article. It could be a person, organisation or a legislative unit. Relevance of an entity to an article is defined by its salience score. Higher relevance produces a higher salience score. Topic of the article is categorized in a similar manner.

As the articles were selected based on presence of word Donald Trump, many of them had him as the entity with highest salience. Other entities usually had a lower salience score.

For this part of the analysis, I removed Donald Trump as the entity from the analysis data frame. This left all the other entities behind. These entities were relevant to that article and to him. I picked the top 5 entities in each article and collated them. Then I counted the number of articles for which each of these entities was in top 5. This gave me a list of 18-20 entities that each news source was talking about in conjunction with Donald Trump. 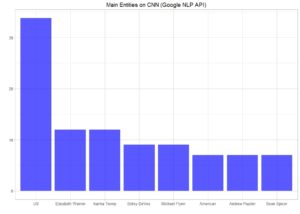 Topically, CNN focused on the US President, Senate, political 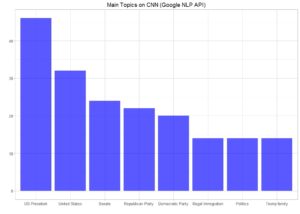 Topical distribution means that the entities mentioned in the article were covered in the context of these broad conversations. This breakdown is consistent with the last part.

Looking at both entities and topics gives us a perspective about CNN's main areas of interest. 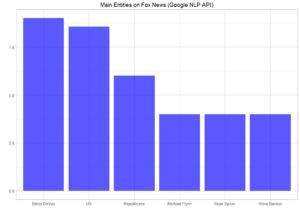 Graph on the right shows that more Fox articles mentioned Betsy Devos than US (represents US, United States and United States of America). Republicans, Michael Flynn, Sean Spicer and Steve Bannon were the other entities consistently mentioned in articles.

Similarly, topical analysis also shows differences between both the 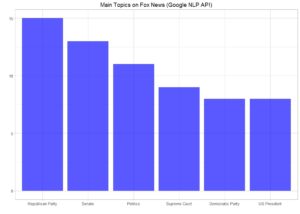 organisations. Fox seems to talk more about the Republican Party, politics and Supreme Court as compared to CNN. It is talking relatively less often about the US President and the Trump Family.

As compared to CNN and Fox, Reuters is geared towards a global audience. 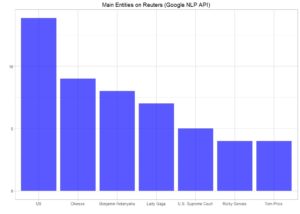 This is clearly seen in the topics covered by them. During this week, Reuters was covering the Chinese, international leaders, comedians, Lady Gaga and the Supreme Court.

This is a clear departure from Fox News/CNN and gives a very clear indication that its articles are targeted towards a different audience.

Combined with neutral and low magnitude sentiment, Reuters stands out from the others.

There are many obvious limitations associated with this project as implemented. This project was only meant to be a data collection and cleaning project. I was able to implement that part of the project fairly quickly and decided to take it a step further and incorporate NLP analysis.

Limited metrics were collected on original data. No analysis was performed to establish statistically significant differences between sentiments and topics covered by different companies.

Project code can be found here. Please get in touch with comments and feedback.