Contributed by John Montroy. John took NYC Data Science Academy 12 week full time Data Science Bootcamp program between Sept 23 to Dec 18, 2015. The post was based on his second class project(due at 4th week of the program).

Given today's constant barrage of negative news media, harboring concerns about public safety is understandable. For many, the specter of crime hangs much heavier than the reality of it - the world is, on average, much safer today than in the past. This is, however, certainly not always the case across the globe. Things many of us might take for granted, such as a low likelihood of a burglary, or a responsive police force, are near non-existent in other countries, some of them similarly industrialized. 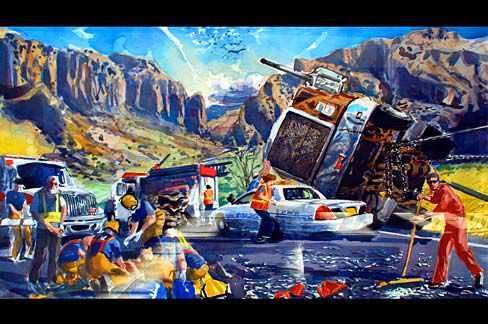 The International Crime Victimisation Survey (ICVS) is a quadrennial survey performed across approximately 90 countries world-wide. Every four years, it takes the temperature of countries on issues such as crime, safety, and policing, serving as a standardized lense of comparison for these statistics. Although the dataset does not yet provide full country coverage, it offers a more well-rounded story on global crime and policing.

To aid in understanding the ICVS, this app helps the user to interactively explore the results of all surveys conducted over the past 25 years. The app was developed using R, Shiny, and ggplot2, and offers visualizations of world results, a country comparison tool, and a look at question correlations using GoogleViz.

In terms of complexity, the dataset here is massive - a modestly large number of records, but a huge number of variables. My starting point in a nutshell:

The first steps, then, are clear: limit scope, clean the data, translate the data to useful categories, and aggregate scores based on question and country. All of this wrangling was performed in R. The full wrangling code (+ all other code) is available on GitHub; I discuss some highlights here.

The basic workflow for aggregation was as follows: 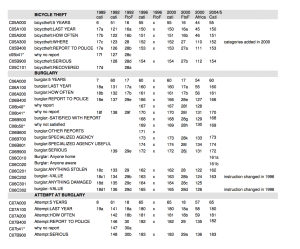 Each question varies by year and survey.

Curveballs abounded. Some questions had four possible respondent answers, some three, some two. A handful of questions actually changed the number of possible answers over time. Ambiguous language was abundant - "Do Not Know" vs "Unknown"? Variation also existed with survey years per country; the survey was conducted mostly on a quadrennial basis, but some were conducted off-year. Three countries might've had a question asked in 1995, 40 in 1996, and two more in 1997. And lastly, per above, two datasets were provided (1989 - 2005, 2010); these datasets occassionally contained slight variations in structure.

A number of strong assumptions had to be made to make aggregation feasible and productive.

In short, some information loss occurred at this step, but gains in clarity far outweighed the minimal losses in specificity.

Functions were generated to handle this aggregation process on the R side; the below function dynamically generates country scores by year, given an input column to group on. The function itself was tweaked on-the-fly to handle fundamental differences (like response labels) - the 2.0 version of this function will lean heavily towards the functional programming side (and would preferably be much cleaner...):

This function is called by the above, and generates percentages per category for the aggregations.

I have great admiration for whoever originally compiled this dataset - the fact that it's as clean, standardized, and well-documented as it is is a marker of obvious labor and scrupulousness. That said, generating aggregated statistics on top of survey-level data was difficult and time-consuming. My personal toolkit of R functions for such tasks has greatly expanded as a result, but this was an ambitious dataset to work with.

The app allows for country comparisons per question.

Shiny is R's interactive UI module - it allows for easy creation of flexible data applications, and supports almost any R functionality you might need. Of course, Shiny isn't without its quirks; the core functionality is a bit unintuitive, and the syntax is mercilessly specific. You can read more about Shiny here, and view a gallery of applications here.

This application makes use of the Shiny Dashboard layout, and takes advantage of reactive programming styles to generate a handful of ggplot2 visualizations. Maps, question text, and the list of selectable countries are all generated dynamically based on other inputs.

The application itself is broken into four tabs: a world map result visualization, a tool for comparing results between countries, a GoogleViz Motion Chart, and an About tab. The world map visualizer gives a broad overview perspective of results by question and year; the country compare tab allows the user to drill down on particular countries of interest. Google's Motion Chart is good at examining correlations between particular questions over time - for a great demonstration, see the popular TED talk given by Hans Rosling.

The full code can be found on GitHub - a few choice bits are reviewed here.

This calls validate + need on a reactive function - every time the reactive is called, this validate condition needs to be fulfilled. This is only a problem due to wait times between loading data sets.

The app needs a way to dynamically render a number of faceted country plots based on the user input of how many countries to compare. Moreover, these plots need to be rendered with only one legend, rather than 1 - 3 separate ones. This was achieved with the below code, which creates a list of plots generated by CountryMapViz based on how many country comparisons were requested:

The grid_arrange_shared_legend functions comes courtesy of the great Hadley Wickham; it extracts the legend (via "guide-box") from one plot of the several passed, and grid.arranges the plots with the legend.

One of the last big hang-ups was getting the "softer" data into the app - question texts, question names, legend scales, and so on. This came down to the unfortunate task of diving into the survey questionnaires, finding the question text, and piecing that together into an R data frame. Note the use of the I() function to create a column of lists - subsetting this data frame allows for the extraction of legend scales and labels for each question.

And so what? What new perspectives on crime and safety can this app provide us?

The world map paints a not-unexpected picture: despite sabre-rattling, Westernized countries in Europe and beyond have, on average, a positive outlook on public safety. Countries in eastern Europe or South America typically don't fare as well - all three sentiment categories (police approval, safety at night, chance of break-in) are similarly negative. This correlation in the sentiment categories is quickly confirmed by the GViz Correlations tab - any combination of those three variables seem to be roughly linearly correlated with one another.

With police reporting rates, however, the story is more complex. Some reporting rates vary across the globe similar to the sentiment questions, but other rates are jarringly static. Percentages of sexual offenses reported, for example, are abysmal world-wide. Equally low are percentages of consumer fraud reported, but these low rates are likely derived from separate causes. Consumer fraud may be more typically handled in the private sphere; sexual offenses are complex and difficult to pin down, as exemplified by recent controversies in the United States.

Car theft is likely the best-reported of any crime.

What is clear is that high-cost crimes are exceptionally well-reported. Car theft is likely the most frequently reported crime across the world; burglary and robbery fair well too. Lesser-impact crimes like bicycle theft and car vandalism make up the other side of spectrum, likely due to lesser cost and increased difficulty of a resolution.

I encourage you to try out the app and find your own patterns. The app allows for compelling visualizations at the click of a button, and there is surely more to find. Perhaps in the future, this app can be expanded to handle other datasets, based on interest.

John Montroy is a graduate of Middlebury College with a B.A. in Physics. After a summer of particle physics at CERN with the Harvard ATLAS team, he began his career as a data analyst in the auto industry....
View all posts by John Montroy >