To eBike or Not to eBike?

CitiBike is the sole bike-share operator in all the boroughs of New York City, except for Staten Island. It also claims New Jersey’s Hoboken (“the sixth borough”) and Jersey City (“the seventh borough”) as part of its operating territory. From May 2021 through April 2022, 29 million rides have been logged. This works out to 2.5 million per month; 560,000 per week; and 79,500 per day on average. 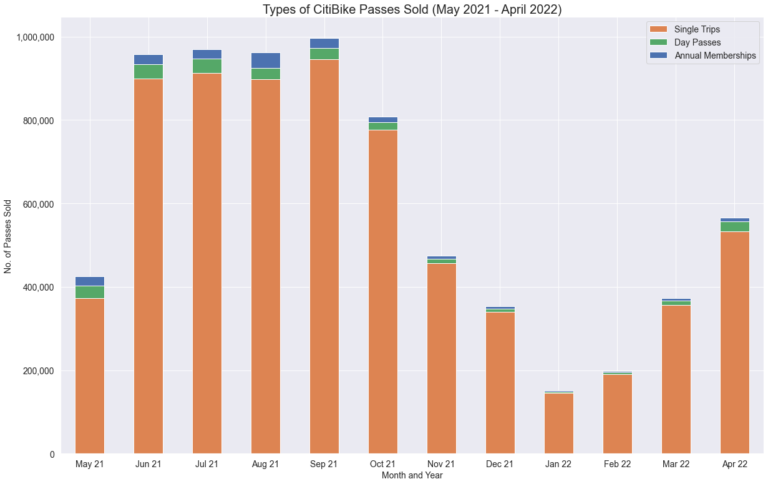 CitiBike has maintained its cyclical pattern with the seasons. One gain for the bike rental service is due to its participation in the Lyft Pink program, which incorporates Lyft, CitiBike, and Seamless (formerly GrubHub) into one package with its own perks and discounts. 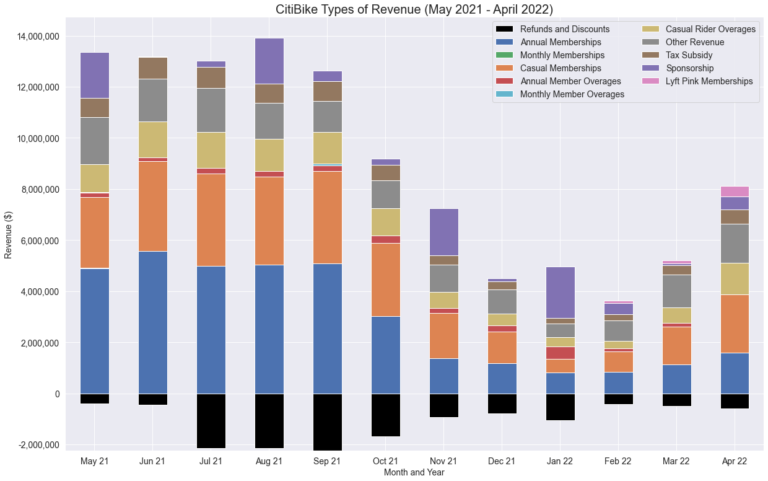 In “The logic of hating cyclists,” Maddox states, “If you live in a mid-to-large sized city and the distance you're traveling is under 2 miles (3.2 km), there's no faster way to travel in heavy traffic than on a bike.” Predictably, the average distance covered in a CitiBike ride is slightly above that threshold, beyond proving his theory.

Members make up three-quarters of CitiBike rides, and one-third of riders have used an electric bike.

Both classic and electric bike rides tend to range from 14 to 15 minutes on average, but electric bike rides tend to cover a little more distance on average (approximately 2.5 miles as opposed to 2 miles by that of classic bikes, a 25% increase). Correspondingly, while classic bikes are normally running at almost 8.75 mph, electric bikes are typically gliding at almost 10.5 mph (a 20% increase). This is certainly faster than a conventional human walking speed of 3 – 4 mph.

The ridership of both types follows the same patterns on both weekdays and weekends, regardless of rush hour.

However, although ridership of classic bikes is markedly seasonal throughout the year, that of electric bikes tends to remain a lot more consistent. In other words, riders of electric bikes are not as influenced by weather patterns as conventional bike riders are. 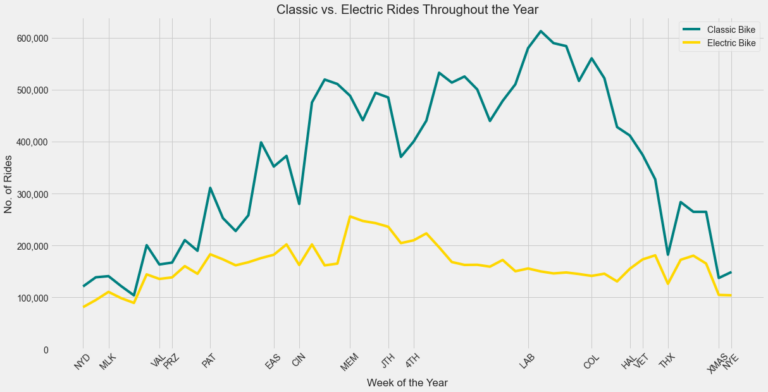 Given the demonstrated data on electric bike ridership as compared to the classic bike, is it worth it for the consumer compared to riding the classic bike or other modes of transportation, particularly walking and public transit? As of June 2022, there are three ways to pay for CitiBike rides: single ride, day pass, and annual membership.

Walking is obviously free but time-consuming. On the other hand, there is always the possibility of using public transportation options paying with a MetroCard or mobile phone enabled system.

While CitiBike is most used for trips 2 to 2.5 miles in range and fully or partially dependent on the pedaling power of the user, MetroCard has the potential to transport a passenger up to 155 miles on a single swipe (assuming 54 free transfers) throughout its subway system.

Battle of the Modes

A pedestrian with a serious intent to reach a destination has an average walking speed of 3.5 mph.  That speed is more than doubled to 8.75 mph for the average CitiBike classic bike rider and nearly tripled to 10.5 mph for the average speed of the electric bike rider. Given that, the next step is to evaluate the time and economic feasibility of these three modes of transportation beyond which taking public transit is better.

For a travel distance of a quarter mile, the CitiBike electric bike costs too much compared to riding public transit, but a four-minute walk is not that much of an effort.

It’s not until after 4.5 miles of travel distance that a CitiBike classic bike is comparable to taking public transit. At this point, the pedestrian will also have to make a judgment as to whether walking more than an hour is worth the physical effort, if time and cost is not an issue.

For a round trip on casual membership, even at a quarter of a mile, traveling by CitiBike is more expensive than simply riding public transit on a single MetroCard round trip. Walking is still a feasible option.

If a CitiBike Day Pass subscriber intends to take at least five two-mile rides within a day, it will begin to make the pass worth it compared to purchasing single rides.

It is after the sixth such two-mile ride that a CitiBike Day Pass is worth it for classic bike over taking public transit if the subscriber’s trips do not exceed that distance.

And it is not until at least 21 two-mile rides are completed on the electric bike using a CitiBike Day Pass that it begins to compare with simply riding public transit.

A CitiBike Day Pass is not worth it beyond two full days for a classic bike only and one full day with an electric bike included. For anything beyond that, a MetroCard 7-Day Pass is a better investment. However, if no more than eight two-mile rides are made within that time frame by classic bike and six by electric, purchasing CitiBike single rides are even more cost-effective, yet still not compared to getting single rides on MetroCard.

Assuming two rides are made every weekday during the month as part of a regular commuter lifestyle, a CitiBike annual membership pays itself off handsomely compared to public transit for both classic and electric bikes, leaving enough savings to take public transit and cabs in unusual situations requiring long distances or inclement weather to be traversed.

Nevertheless, despite the financial feasibility for using CitiBike for commuting or personal travel, it has seen a sharp decline in the past year. A possible explanation is many commuters returning to public transit with the decline of the coronavirus pandemic, reflecting greater preferences for personal comfort or perceived efficiency with respect to this mode. Unless CitiBike can make a strong case for the financial feasibility for utilizing its bike share service or improving it to facilitate greater usage, its usage surge documented during the pandemic with the official shutdown of transit and taxi services and perceived safety of cycling in the open air was just a flash-in-the-pan moment for it.

Finally, although electric bikes are a waste of money for short-term CitiBike usage, they are comparable to taking public transit when used as part of an Annual Membership plan. In fact, a ride of slightly more than 18 minutes, which would typically be more than three miles assuming its traveling at the average speed of 10.5 mph, costs about as much as riding transit under those circumstances.

Due to such feasibility for such electrical assist to be used for more regular bike riders in the long run, a company such as JOCO has recently entered the NYC bike-share market by renting out its fleet of higher-end electric bikes on a weekly basis. However, it has been used primarily by working delivery riders rather than general commuters. Nevertheless, it offers great potential for regular commuters disillusioned by the current state of NYC public transit and taxis and seeking a healthier and more environmentally friendly alternative that does not fatigue the rider as much as an unpowered bike would.

Now that the feasibility for CitiBike membership and usage of electric bikes has been explored, next it is time to model the travel patterns and  physical performance of the riders themselves using the bike-share service throughout the city

Everything you Need to Know About Fares and Tolls in New York (MTA)
https://new.mta.info/fares

Creative data scientist who is passionate about applying machine learning to model physical processes, logistics, and business activities. Integrating over 15 years of civil engineering experience to blend technical and leadership background with data science skills to solve...
View all posts by Joydeep Chatterjee >