Crunchbase is a database of record for the startup and venture capital communities. The data used in this shiny project contains more than 160,000 funding records of 40,000 companies, which reveals the funding amount, funding round number, the information of both investor and the invested company for each funding.

The following is a simple record of this dataset:

By applying data manipulation, we could drilldown analysis onto the country level. The This 3D global plot was generated with a R package named 'threejs', and it is pretty straightforward to depict the international investments. Every line between two countries represents an international investment relationship. The more red color, the higher traffic. With the double-end slider bar on the left, investment relationships can be taken into or kicked out from the data slice behind this plot. The plot above shows, USA involves in the most of the top 150 relationships, which confirms our comment sense to global economics.

Although 3D map are quite straightforward, it becomes not user friendly, quite like a ball of yarn, when too many lines involve. The Capital flow map are generated for drawing a picture of international capital flow. The whole dataset are divided into three parts, flow-in map, flow-out map and domestic map. With the select button, we can dig into investment data on total and average level.

In total amount level, USA is the bright area over the world, which means it has the highest amount of capital flow, and this makes sense since USA is the basically an unparalleled hub of capital.

Brazil wins the first place of capital flow in amount per investment, which might be because Brazil is one of the BRICS countries. What's more, USA, China and Egypt are with relatively high flow-in amount.

By comparing the flow-in and flow-out chart, we could find out that there are a lot of countries do not get invested but invest other countries, and most of them are undeveloped countries and countries from the third world. For example, none wants to invest The North Korea, but it unexpectedly gives money to The South Korea and Malaysia. The country with highest average flow- out amount is Qatar, whose average going out investment amount is 35 million dollars. 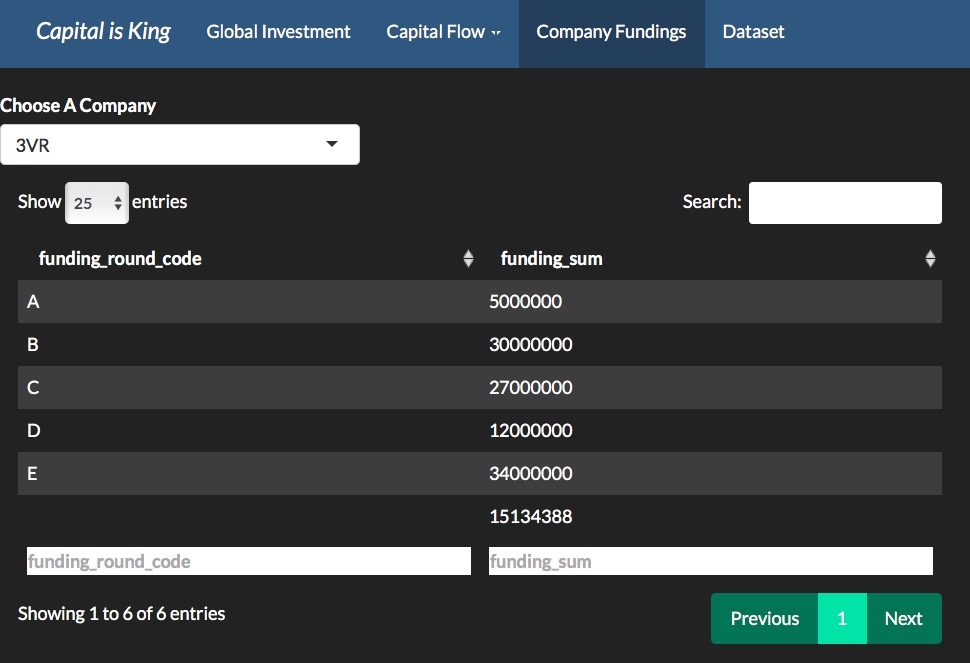 In this table we could get details about one company named 3VR. The amount of funding for each round is shown, and the blank cell on the bottom indicates the money from unknown round.

nlr September 18, 2019
Here at this site really the fastidious material collection so that everybody can enjoy a lot. machine learning training