A Traveler's Guide to the Sky

Maybe you’ve been here before. After a long flight, you make your way down to baggage claim, ready to grab your bags and finally make your way to your destination. A few minutes pass, and you see other passengers grab their bags. After twenty minutes, the crowd around the carousel starts to thin. Finally, you’ve had enough. You speak to the nearest TSA agent and then find out after some investigating that your bags didn’t make the trip with you.

United Airlines and other airline companies have recently captured the nation’s headlines because of terrible flying experiences caught on camera. Two weeks ago, a man was forcibly removed from his seat on a United Airlines flight, and just last week, it was reported that a passenger’s pet giant bunny was found dead after their flight. Such incidents, as well as my own flying experiences, piqued my interest. I wanted to use data to find which airline and airport are the worst in terms of TSA claim frequency and why.

The data used to investigate each TSA claim event was taken from the Department of Homeland Security. The data spanned from 2010-2015, with a total of just over 30,000 claims. Some of the variables that proved most valuable were:

Additionally, data was pulled from the Bureau of Transportation Statistics for information on number of flights per top airlines and airports in 2014 and 2015. From this data, we are able to get a rough estimate of how often a claim might be filed per airline and airport.

First, I wanted to get a sense of how many claims happened per airport. I use latitude and longitude data to created a map with googleVis and leaflet, which shows different sized circles in each airport location proportional to the number of claims filed at each. We can see that, regardless of year, JFK has the most claims by far, followed by LAX, and then Chicago. This doesn’t seem too surprising however, since we’d expect to see much higher claim counts from major metropolitan cities. The map will prove to be more useful once we have a better insight as to how many flights go in and out of each of these airports. That will allow for a more accurate assessment of  the claim rate. 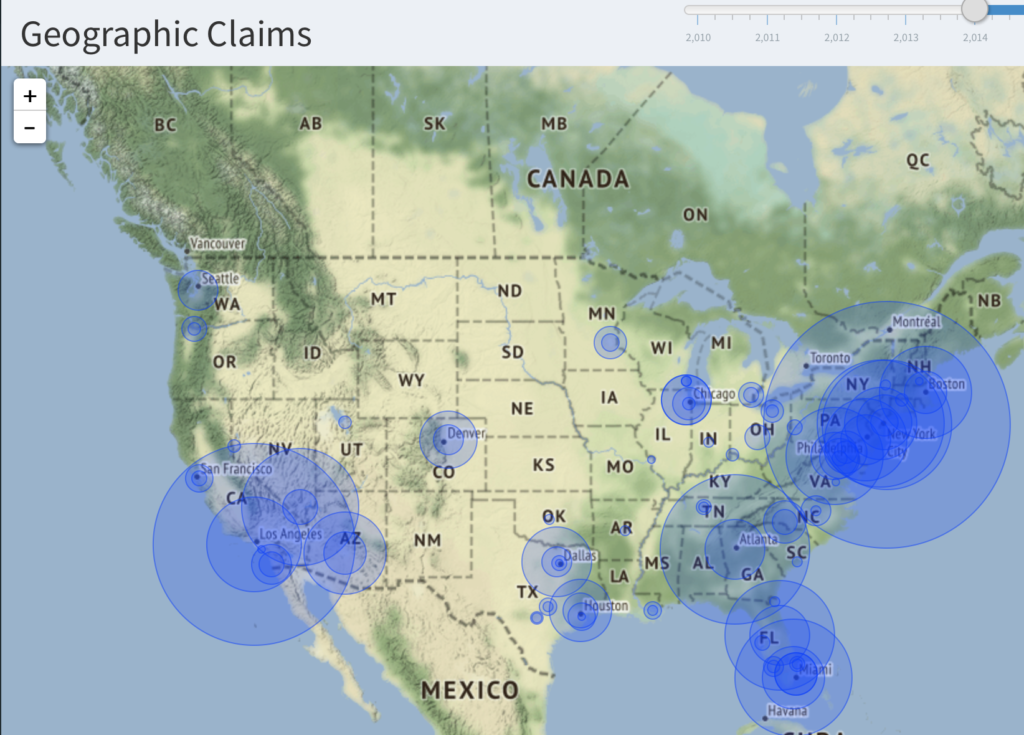 Next, I was curious to see if there was a seasonal pattern involved in the frequency of claims. However, surprisingly enough, there was no clear seasonal trend according to the time series visualization. 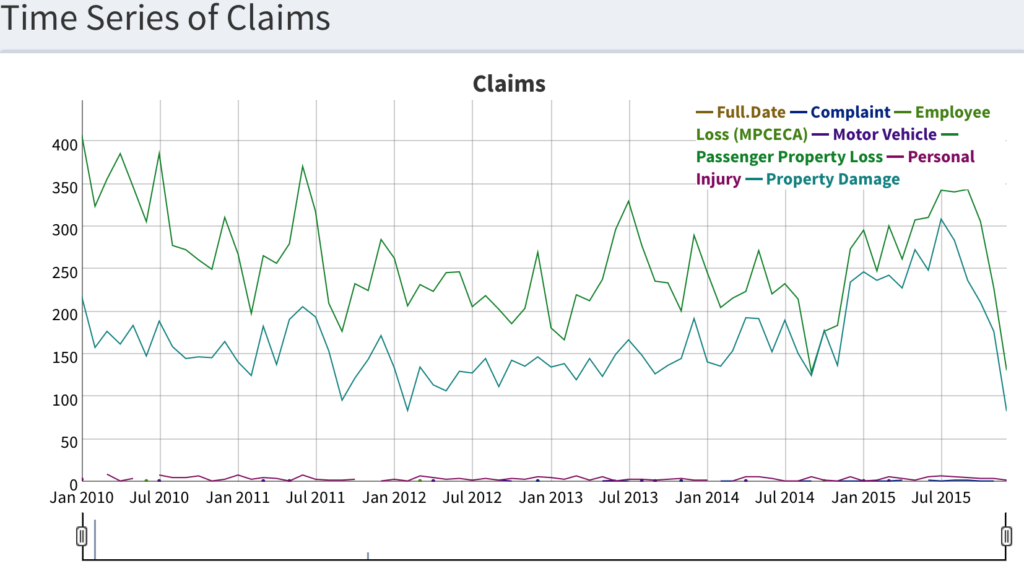 As we have an actual count of how many items were claimed per event, I thought it would be cool to visualize how many specific items were lost or damaged by the top airports and airlines. The heat maps allow us to filter by disposition, but for sake of brevity, we’ll look only at approved claims (claims that were paid out in full by the airlines). Some insights were: 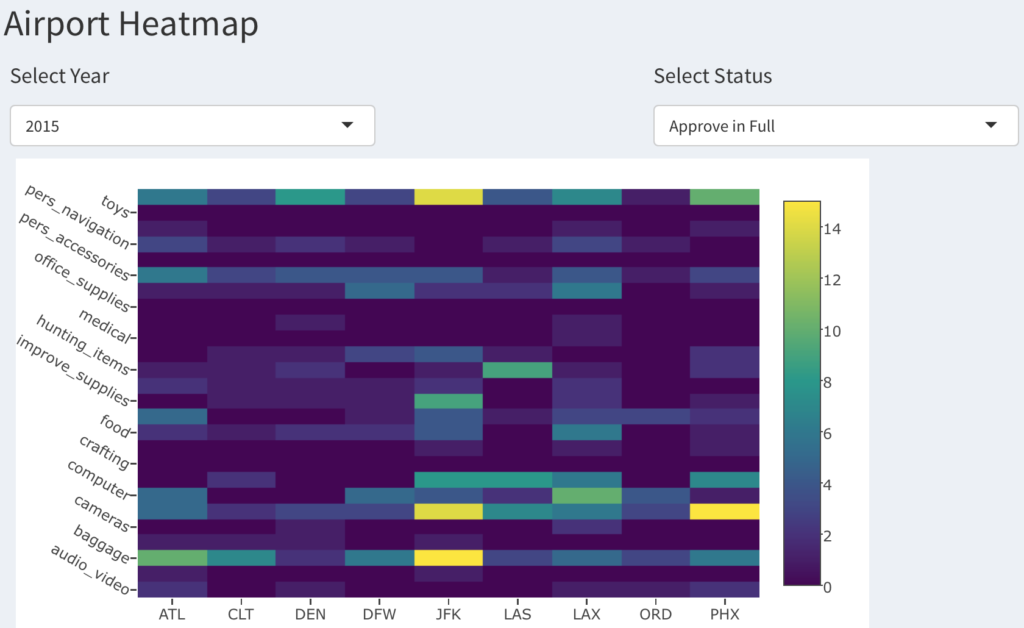 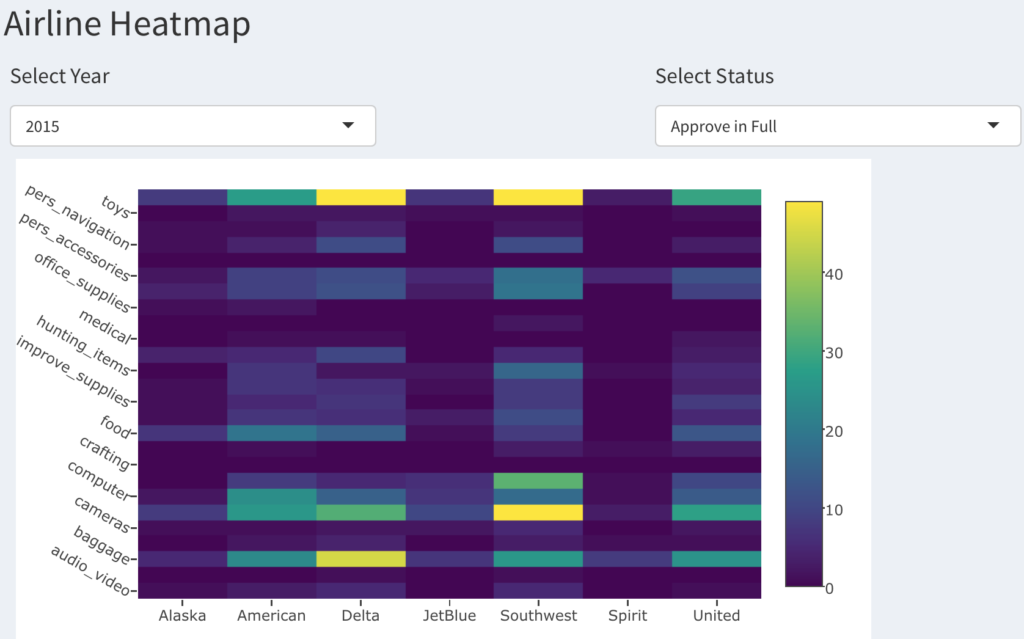 Though I went into this project assuming that United Airlines or Spirit Airlines would be the worst airlines in terms of number of TSA claims, the data did not indicate that these airlines, which dominated the headlines in recent weeks, were responsible for the most passenger dissatisfaction. Incorporating the BTS data showed a different angle however, based on the number of flights each airline flew per year in 2014 and 2015. In 2015, American Airlines, Southwest Airlines, Delta, United, and JetBlue rounded out the top 5 most flown airlines. To my surprise, Atlanta was responsible for the most flights in 2015, followed by LAX, O’Hare, Dallas/Fort Worth, and then JFK.

Now the map actually tells us something. JFK was clearly the number one airport for most claims from 2010 - 2015, yet was only the 5th most traveled in 2015. As for the claim rate by airlines, United claims the top spot in 2014 and 2015, followed by JetBlue, and then Spirit Airlines. Maybe the news headlines were onto something! 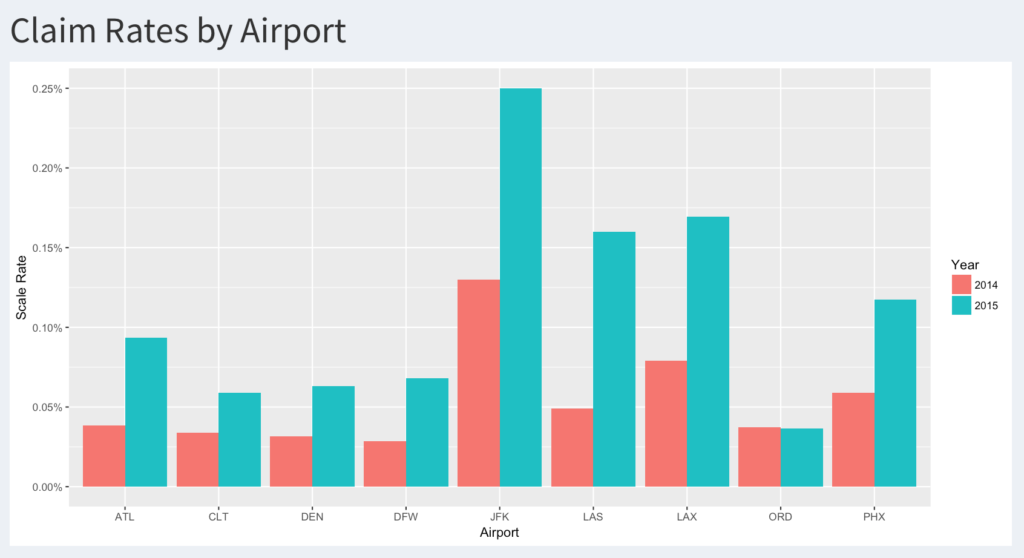 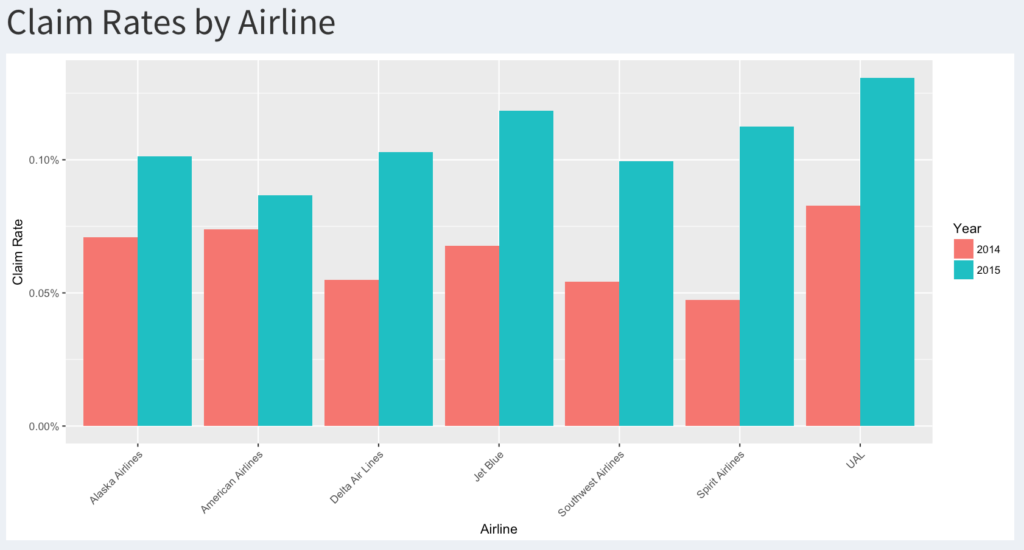 Admittedly, my claim rates calculation should be taken with a grain of salt. The rate was calculated based on the overall average number of passengers per flight in 2014 (89) and 2015 (94). Interestingly, 2015 saw about 25,000 fewer flights than in 2014, but 2015 recorded more almost 50 million more passengers than in 2014. Perhaps the increase in passengers and decrease in flights in 2015 caused a higher rate of claims, but I believe more data would be needed to confirm this claim.

Another notion worth investigating is the number of connecting flights and passengers per airport. Atlanta leads all airports in number of flights by a wide margin, but has a low claim rate, suggesting that maybe passengers who fly to Atlanta don't actually file their claims until they arrive at their final destination.

Lastly, although this is a very high level analysis at domestic airport claims, it does make me feel a little better that recent articles like this one from The Economist come to similar conclusions as my findings. I hope I may be of service by allowing you to interact with my Shiny app, which you might find useful in deciding where your next flight might be, and which airline you may choose to get there.