Fans of sports generally, and MMA specifically, will be familiar with the world of sports betting and the foibles of those who engage in it. A little familiarity with the ways in which betting lines on upcoming UFC fights shift can raise two interesting questions: Who's changing these lines, and why?

As for who changes the lines, that's easy - the bettors! However, why bettors change their bets in one direction or another is a more interesting question, to which the answer is usually fuzzy, and based on not much but intuition and gut-feeling.

Suspecting that the fates of typically well-set lines are at the mercy of uninformed gamblers, I set out to create an online graphical resource to help dispel some of the superstitions and confusions that so often inform the betting decisions of even the most dedicated fans of MMA and the UFC.

Using a Kaggle.com data-set containing information on every fight ever held by the UFC in its 25-year history (scraped from UFC.com by contributor Rajeev Warrier), I thought to approach the problem of visualizing "fight" data from two angles: tendencies of outcome by weight-class, and the stoppage tendencies of the dozen most experienced referees to have officiated UFC events.

Fortunately for the analyst attempting to explore the world of MMA gambling, fans of Mixed Martial Arts are not secretive of their prejudices with respect to why fights play out the way they do. The barest acquaintance with MMA fandom will reveal a few salient tropes about the "fight game" held by followers of the sport:

Some axioms of fighting are plainly true - heavyweight fights do end in knockouts and TKOs much more often than those of the lighter weights. Others seem shakier; are some referees, like the unfortunate Mr. Mazaggatti, unfairly maligned by the mob? Still, others don't exist at all, but probably should; for instance, while the lighter classes of the women's division aren't famed for the frequency with which their fights deliver a finish (a stoppage), just how seldom finishes occur in women's strawweight and flyweight relative to women's bantamweight may surprise some fans of the sport.

Insights gleaned from the data are meant to inform better betting decisions. A bettor who holds the opinion that heavyweight fights end in "finishes", and so places a bet on a given fight involving a skilled grappler ending in submission may be surprised to learn just how few "finishes" at heavyweight come by way of submission. Consequently, he or she may revise that bet to better reflect the history of the heavyweight division.

Similarly, a bettor disinclined to bet on a fight officiated by an unfavored referee may reconsider based on the visualized history of that referee's career in terms of specific interventions, and stoppages generally. As a developing app, the UFC Bettor's Reference is meant to shed light on the realities of the trends in MMA fans may correctly or incorrectly perceive.

The UFC Bettors' Reference App exhibits six graphs generated by R's ggplot2 package for data visualization. Two of these graphs are "interactive," meaning they allow the user to adjust aspects of the data shown to better serve his or her focus. The first of these - "Normalized Interactive - Weight Class by Outcome" - gives users the option of viewing a normalized bar chart of every fight held in each of the UFC's 14 weight classes (including Catch Weight and Open Weight bouts) by win-type: 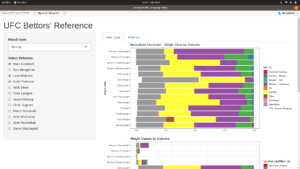 Or, viewers can toggle to a view of the same chart by stoppage/decision, instead of win-type: 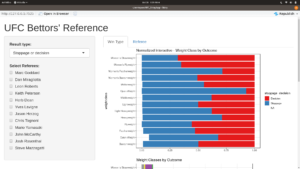 For an overall picture of the fight frequency across the weight classes, the app also features the graph below. Understanding the size of the data set is important to users wishing to avoid misinterpreting information pictured in the two graphs above; seemingly surprising results for, say, the proportion of women's featherweight fights ending in a stoppage are explained by the relatively small number of women's featherweight fights on record: 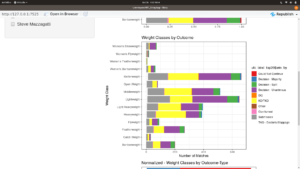 Clicking on the "Referee" tab at the top brings the user to an overview of the UFC's top 12 most-experienced referees by the their stoppage histories. This aspect of the app is meant to dispel or reinforce perceptions of referees, and by extension their influence on a given match's outcome: 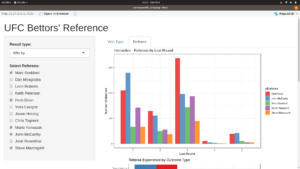 The interactivity of this plot allows users to compare individual referees by their stoppage histories; along the x-axis are numbers 1 through 5, representing the counts of rounds in which the plotted referees have stopped contests over the courses of their careers.

Fans of MMA may be surprised to see the proportion of John McCarthy's stoppages having occurred in the first round, distinct from the majority of referees whose stoppage distributions tend to follow a different pattern. Interestingly, Steve Mazzaggatti's stoppage history follows the conventional pattern, suggesting that his reputation for bad-calls may be less deserved than commonly thought.

The final two graphs of this section are similar to those under the "Win-type" tab, with referees in place of weight classes.

Given the robustness of the dataset scraped from UFC.com, there's room for much more on the UFC Bettors' Reference app. Future additions will involve graphical (linear regressions, scatter plots, box plots) representations of fight data, such as takedowns attempted and win-type, strikes landed and strikes attempted, stoppage-time within a round and round-of-stoppage, etc.).

The aim of this app is to be a simple, easy-to-read, but useful resource for fans interested in betting, but unwilling to trust to the dogmas of the MMA world. With enough analysis, MMA's "Moneyball" moment may be around the corner!

View all posts by Arliss Coates >