Although UFO (Unidentified Flying Object) sightings have been reported for millenia, it was only in the  1950s that  they began to  garner considerable interest in  the United States.. As the Cold War progressed, American citizens were encouraged to report any new sightings to the newly minted, Project Bluebook - a systematic study of aerial phenomena overseen and conducted by the United States Air Force.

While the Project Bluebook was publicly disbanded in the early 1960s, records of UFO sightings are still contained in the data obtained by the National UFO Reporting Center - the most prominent data collector of UFO data for the United States and Canada.

In this examination, we explore over 60,000 UFO sightings in the US and Canada from 1910 through 2014 with the hope of gaining insights into how our sightings have changed over time. Specifically, we ask:

A quick glance of the geographic data reveals no discernible patterns or changes, except that that the number of sightings increases each year..

Why do we have more sightings? There are a myriad of factors that could contribute to the explosion of sightings year after year:

As the years increase, we do see clustering of sightings in areas with higher population densities; however, there are some noticeable exceptions in the less populated mid-Western states. These sightings, however, may be attributable to clearer skies with less urban population. 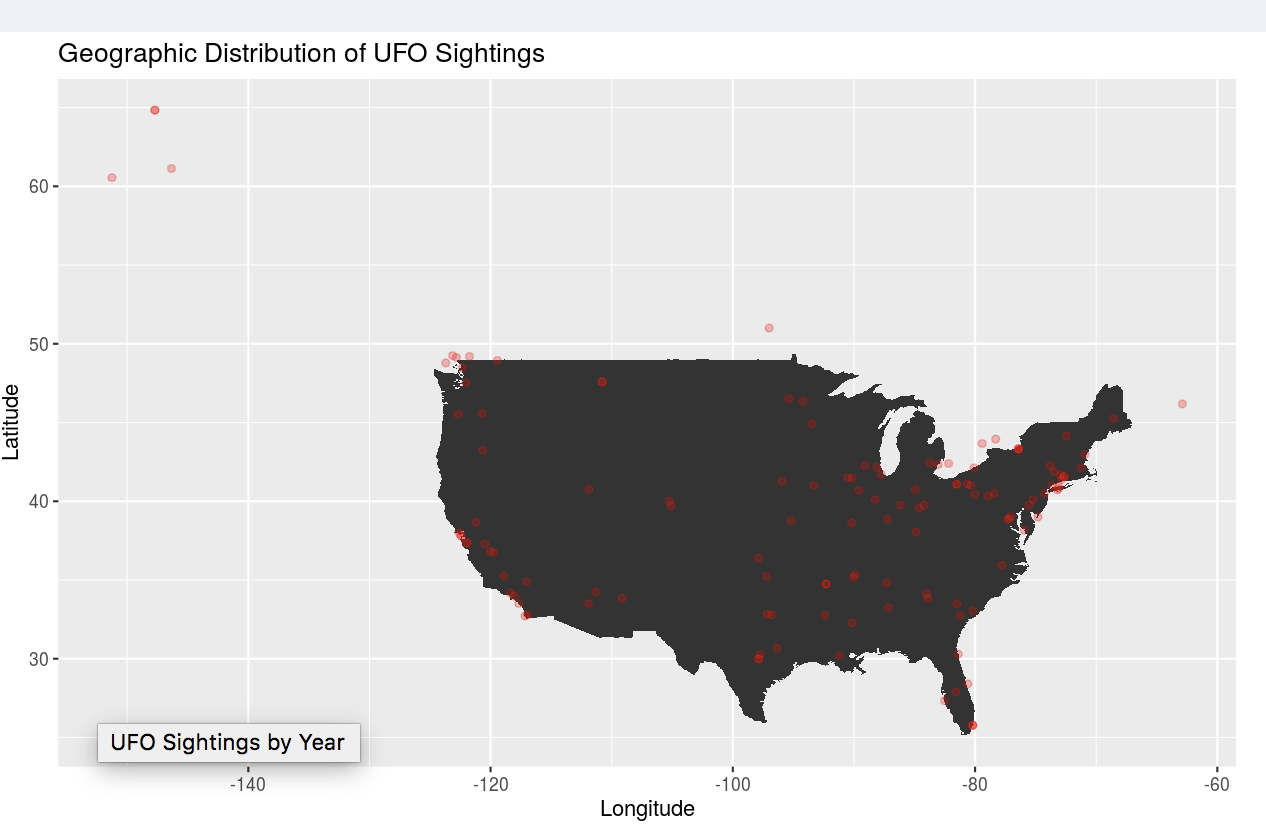 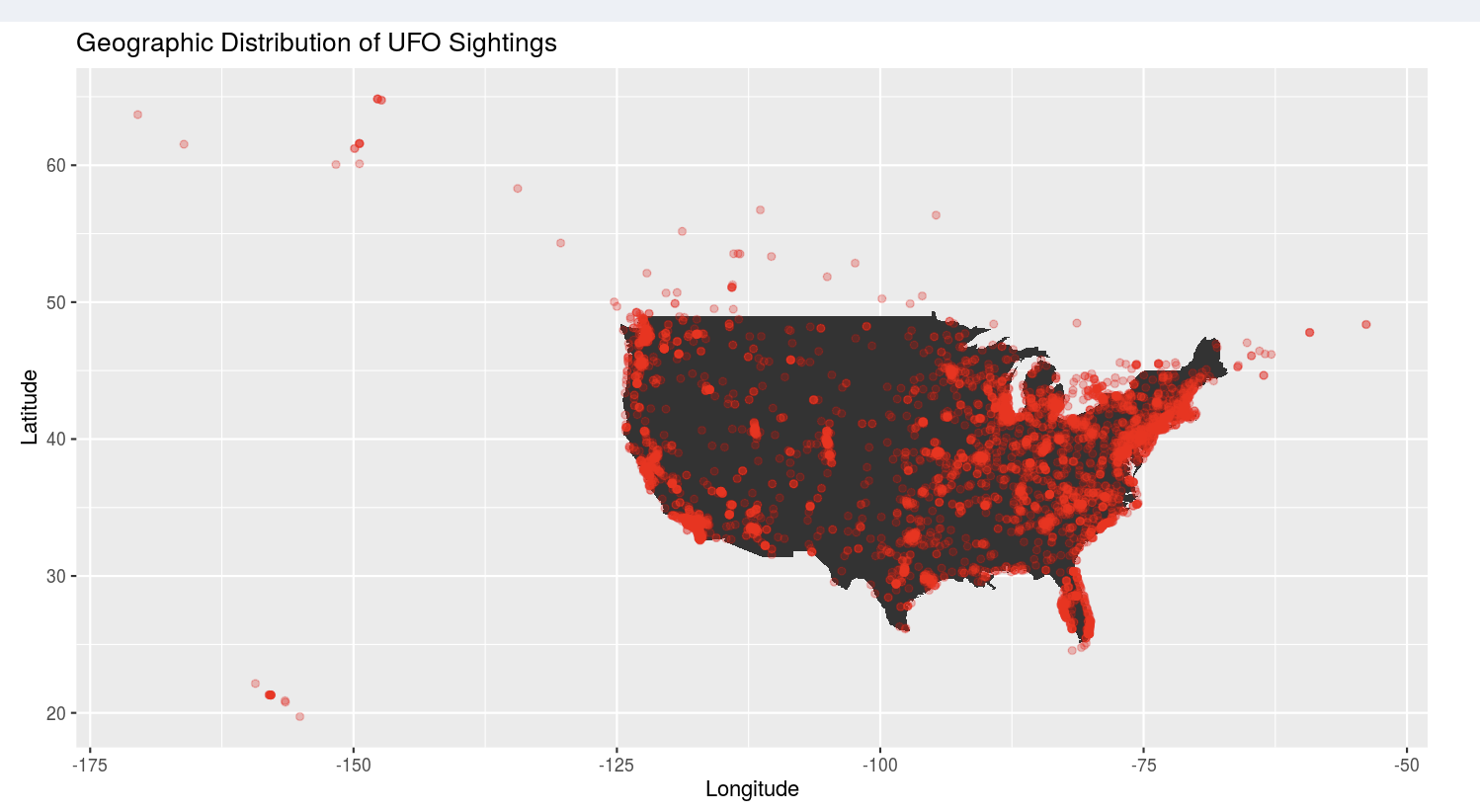 In the calendar plot below, we combine the minute-sum of sightings across specific year. We can use this plot to see if there are certain days wherein sightings or times of year where sightings are more likely to occur. An analysis of our data reveals that a concentration of sightings occur during the summer months,- perhaps due to the fact that more people are outside and looking towards up at the sky rather than inside their homes away from the cold. 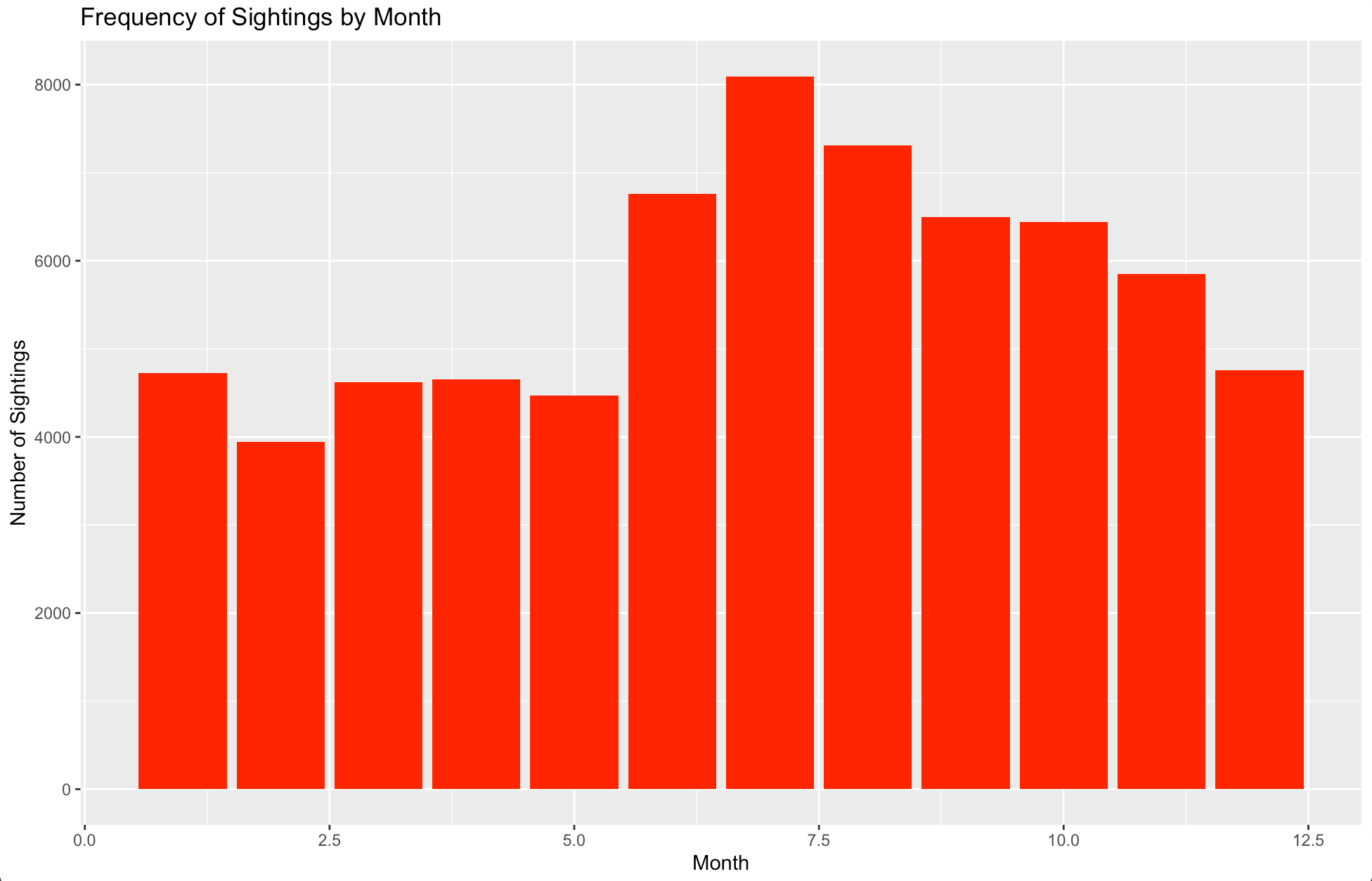 Interestingly if we overlay every year in our dataset, we do see a convergence of sightings wherein 25% or more of sightings occur on our near July 4th. This is perhaps unsurprising as some could mistake fireworks for an unidentified flying object. 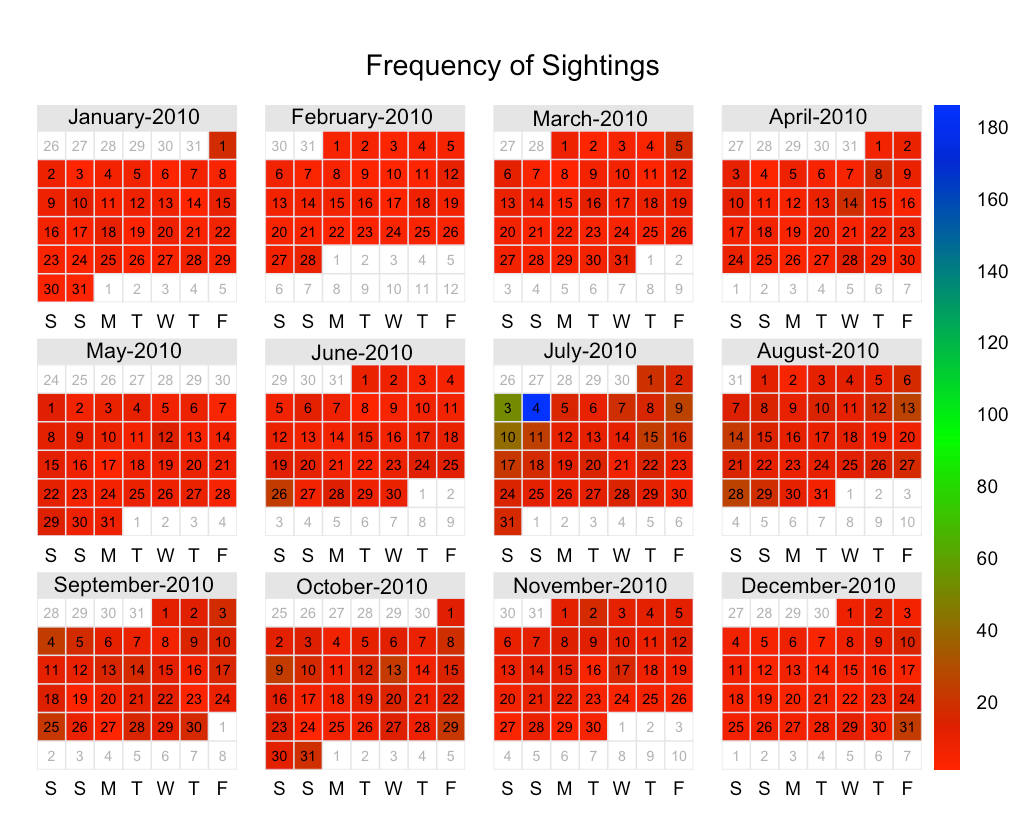 In this data set we plot the relative frequency of the most popular craft shapes from 1960 to 2014. Indeed for most objects, such as Chevron, Cone, Diamond, Delta, Rectangle, Sphere, and Teardrop, the rate of incidence has remained unchanged. And with the exception of Light, most other craft shapes have dwindled, particularly the infamous Disk which has decreased by a factor of 6 since Roswell.

The duration of the average encounter has been on the rise over the years. From the 1920s the time in minutes has increased from less than 2 minutes on average to over 30 minutes in the 2010s. As indicated, there are about 12 years with average sightings longer than 200 minutes. These years  correspond with years in which "flaps" (clusters of sightings over an extended period of time and by multiple observers) have occurred, notably the Phoenix Lights incident of 1997.

The NUFORC data set provides a rich comments for each encounter. I would recommend further study be made on these comments to determine word frequencies over time.

View all posts by Samir Far >