Contributed by Denis Nguyen. He is currently in the NYC Data Science Academy 12 week full-time Data Science Bootcamp program taking place between April 11th to July 1st, 2016. This post is based on his second class project - R Shiny (due on the 4th week of the program).

The U.S. Census, mandated by the Constitution, takes place every 10 years in order to count every resident in the United States. This information is used to determine the number of seats each state has in the U.S. House of Representatives and to distribute public funds to local communities for educational programs

, health care, law enforcement and highways. Participating in the decennial census is a civic duty and refusing to do so could lead to a fine of up to $5,000.

The most recent census took place in 2010, with the next one planned for 2020. The 2010 Census was the largest one ever performed, with over 70 percent of households returning responses. While this information is useful for the government, it can also be useful for marketing companies and other organizations with target audiences. Equipped with population demographics, marketing companies know where to focus their efforts to yield the maximum return. With this interest in mind, I wanted to know how the population was changing and the different rates at which race/ethnic groups were changing. In order to visualize these changes, I designed an app that allows users to see population projections made by the U.S. Census Bureau for the next 45 years.

Have fun exploring the app and see what insights you can glean.

The data was obtained from the United States Census Bureau and projections were produced using information from the 2010 Census and a cohort-component method. These projections are updated periodically in order to reflect the changing factors that affect population growth and data displayed by the app was based on the projections made in 2014. The data contained projections up to 2060 and studied differences in births, deaths, migration, gender, and race/ethnicity.

The data had to be reorganized because some files had a column labeled "Hispanic origin" while other files had those choices under the race/ethnicity column. In order to keep the information easier to analyze, population count for Hispanic/Non-Hispanic origin was calculated and placed under the same column as the other races and ethnicities.

The app has five tab that allow users to visualize and examine the projected populations. The app was initially planned to display all the information

in one graph, giving users the ability to change multiple parameters at a time but the number of options was overwhelming so three tabs were created. This allows users to focus on different aspects of the population demographics without being lost in the options.

up makes it easier for users to find interesting crossovers of birth rate and death rate and compare how migration rate may contrast. A slider also enables users to focus on specific years, zooming into the graph so that they can see specific places of crossing over. Hovering over points on the graphs will give users exact numbers and clicking on a point will temporarily outline it until another point is clicked. 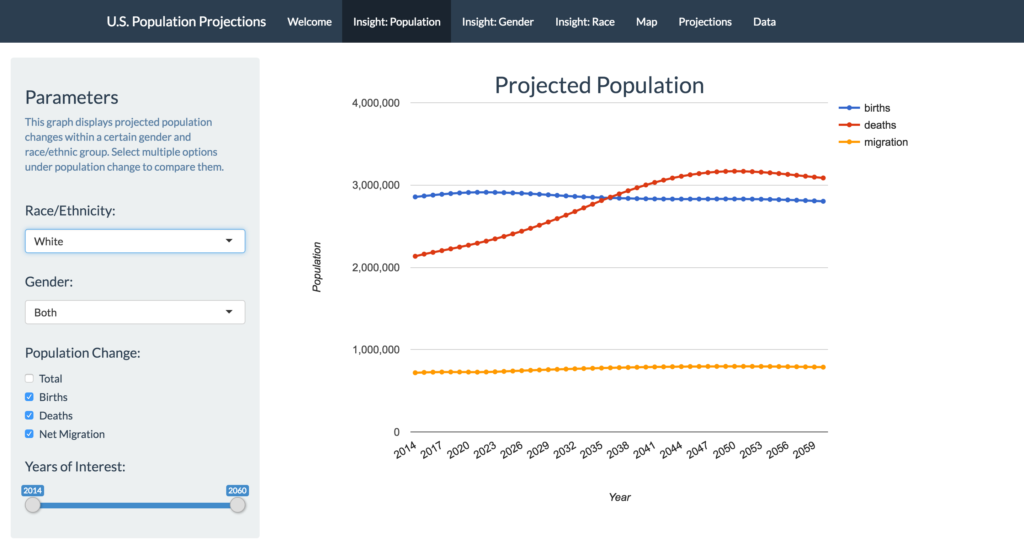 The second section is similar to the first but differs in focus. It allows users to compare 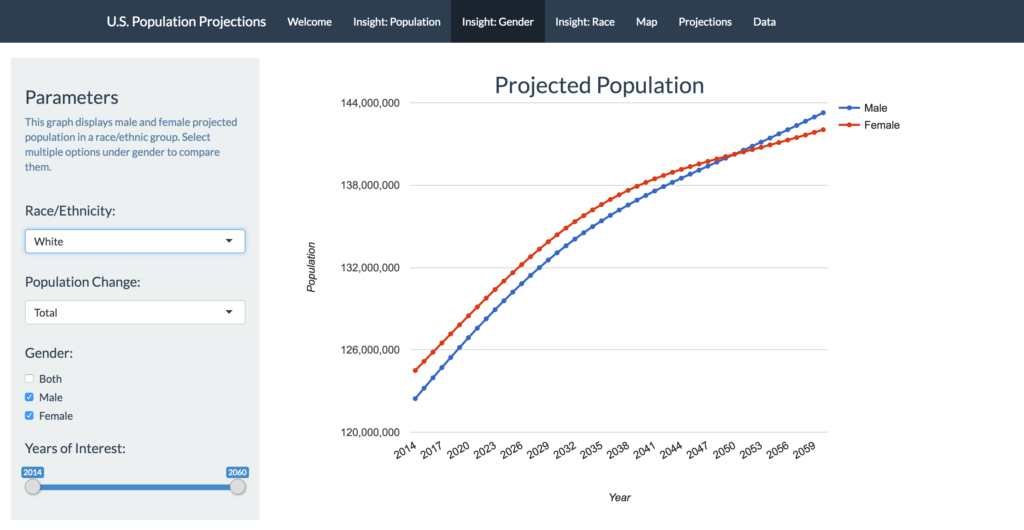 The third section concentrates on the differences among population projections of different races/ethnicities. By removing

the "All" option, users can highlight the groups of interest in order to view the differences in growth rate and when some groups may peak or decline in numbers. 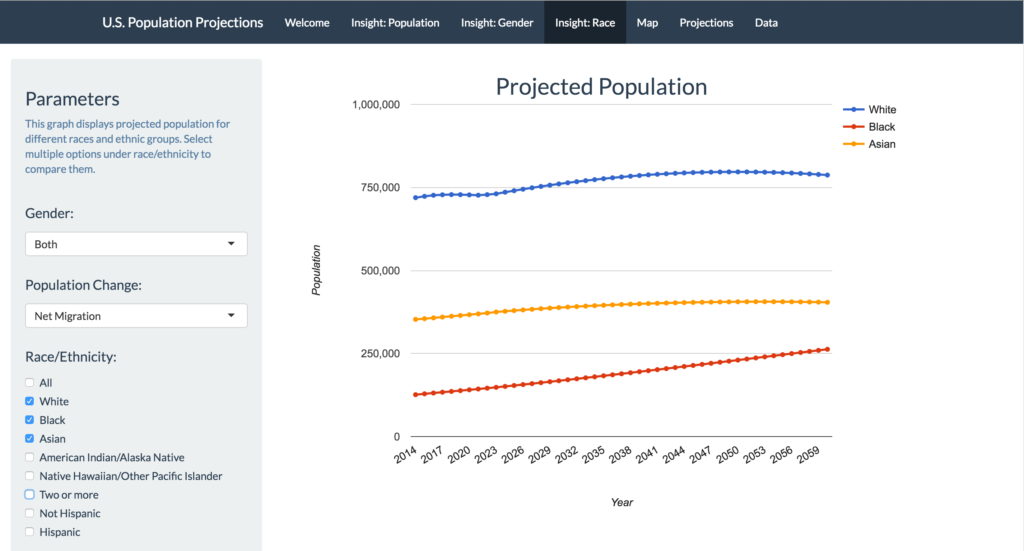 Map of the United States

This section exhibits the percent change and total change by state. The darker colors represent states that have a higher increase in population while lighter colors represent little population growth. The slider can be shifted to see the population change between two different years and users can hover over each state to get the exact percent/absolute change. The title of the map changes accordingly to reflect the chosen parameters so that users understand what the map is displaying. 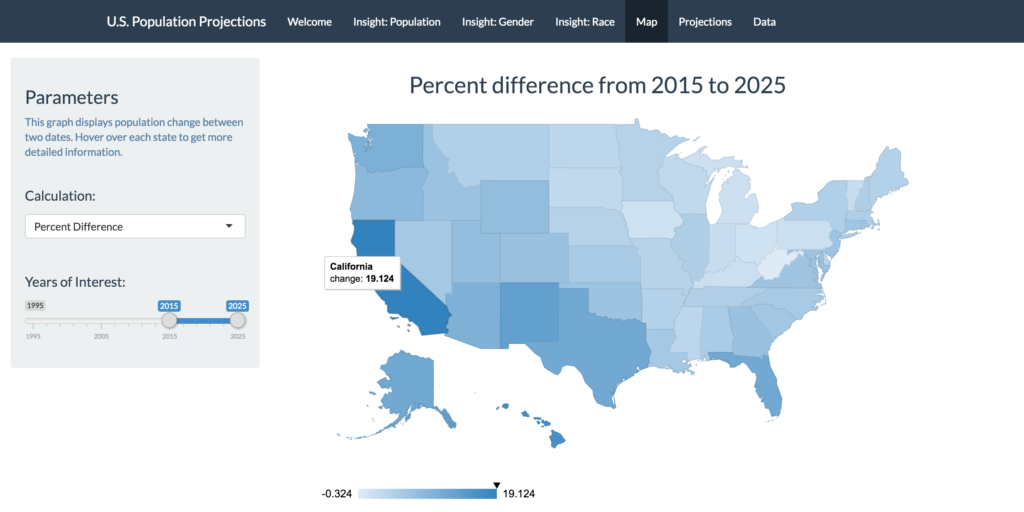 This section displays the U.S. Census Bureau total population projections made in three different years. Users can toggle on and off projection lines, as well

as use the slider to zoom into the years of interest to get a better picture of differences. These projections are made by considering factors affecting population growth and are periodically updated to reflect changes. 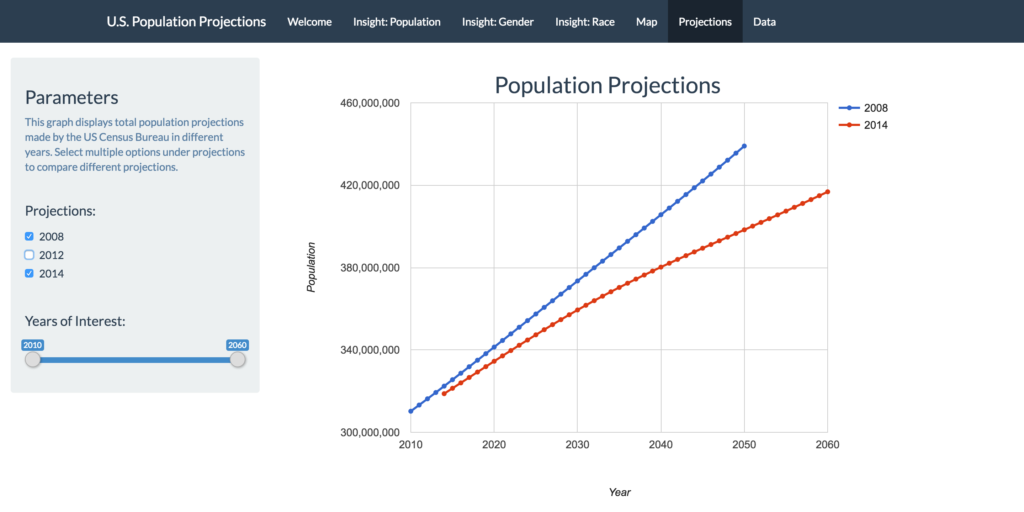 This app can be used to understand how the population of the United States is changing and the direction in which it will shift in the following years. Although we expect the population to increase, it is interesting to see where most of the growth is coming from. Some interesting finds

With insights attained from this app, marketing companies can identify potential and unsaturated markets and cater to those groups. Even if you don't work for a marketing company, these trends could help you decide where to buy

next house. If you're looking for a populated area, consider moving to California where there is a projected high population increase. If a home in a quiet and peaceful area is more of your liking, consider less-populated states such as West Virginia that are expected to have a decreasing population. There is information to be extracted from this app and when combined with additional information collected by the U.S. Census Bureau, it can be a powerful tool.

Enjoy exploring the app and see what interesting trends you uncover. Maybe you'll find your next conversation starter.

The code for this project can be found on GitHub.