Cancer is a major health problem and the second leading cause of death in the United States. To deal with this problem, governments, policy makers, health professionals, and researchers refer to cancer statistics to understand the impact of cancer on society and to develop strategies to address the social challenges involved.

Cancer statistics basically describe what happens in large groups of populations and provide a big picture in time of the burden of cancer on society. More specifically, cancer statistics provide the number of people diagnosed with and who die from cancer each year. They also show differences of incidence and mortality among the age group, gender, race, location, and cancer type.

This Shiny project was conducted to provide such cancer statistics with various visualizations. For a better understanding of the influence of age, race, sex, and region on the incidence and mortality of cancers, the listed analyses below were performed. The results are provided in the Shiny Dashboard.

The data used for this project were obtained from two separate sources:

Both state cancer incidence rate (i.e., the number of new cancers per 100,000 population) and mortality rate (i.e.,  the number of deaths per 100,000 population) are calculated and summarized. The rates can be estimated for a specific cancer type, gender, and ethnicity using the filters such as cancer type, race, and sex, as illustrated in Figures 1 and 2.

The state map in Figures 1 and 2 also show the variation of  cancer incidence and mortality rates for the years from 1999 to 2015. It was found that both rates increased over the years, which resulted from the increased population size and the aged population each year.

Cancer rate variation per age group is compared using diverge bar charts as shown in Figures 5 and 6. Normalized incidence rates greater than zero are observed in the age groups of 55+ years, while normalized mortality rates greater than zero are shown in 60 + years. Overall, the results displayed in Figures 3 through 6 clearly show that age is a significant factor that correlates with cancer rates. 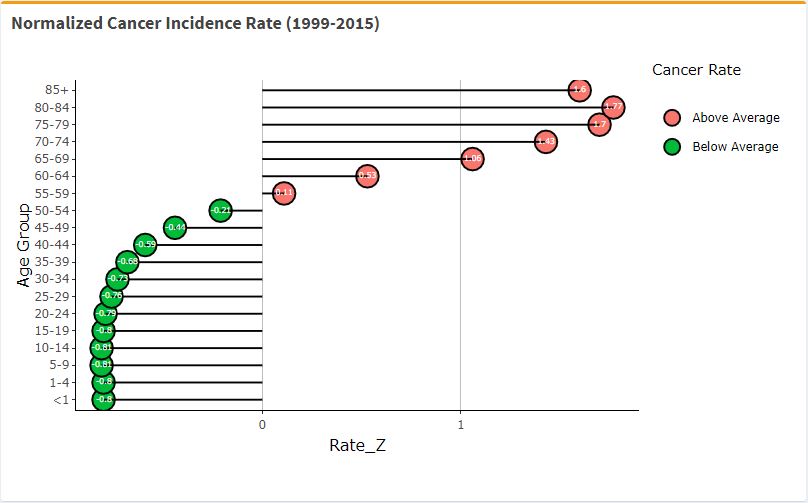 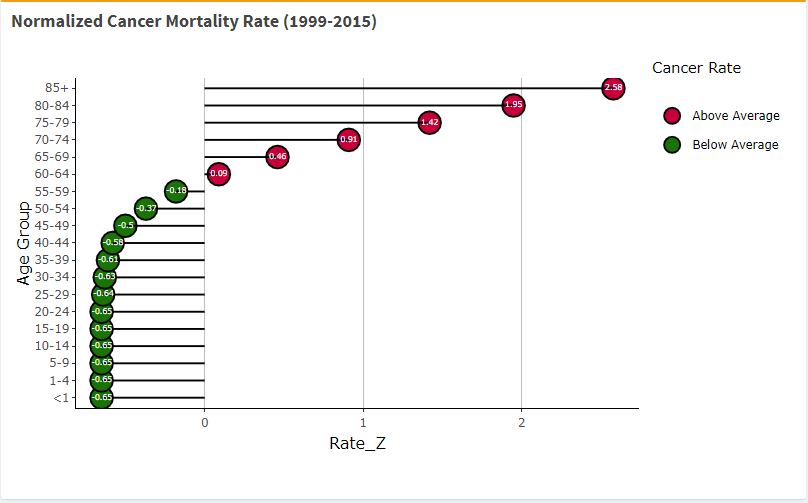 The bar charts in Figure 7 show the Top 10 new cancer cases and cancer deaths in each state. More specifically, the top 10 cancers can be generated with filters such as race, sex, and year. The most common cancers in each state are breast cancer, lung and bronchus cancer, prostate cancer, colon and rectum cancer, melanoma of the skin, corpus and uterus cancer, and bladder cancer.

The stacked bar chart in Figure 8 illustrates incidence (or mortality) percentage of age groups for a specific cancer type. Five different age groups were prepared, and cancer incidence (or mortality) percentage of each group was calculated. The results show that the majority age group of thyroid and testis cancers is 30 - 49 (years), while the majority age group of the other cancers is 65+ (years). 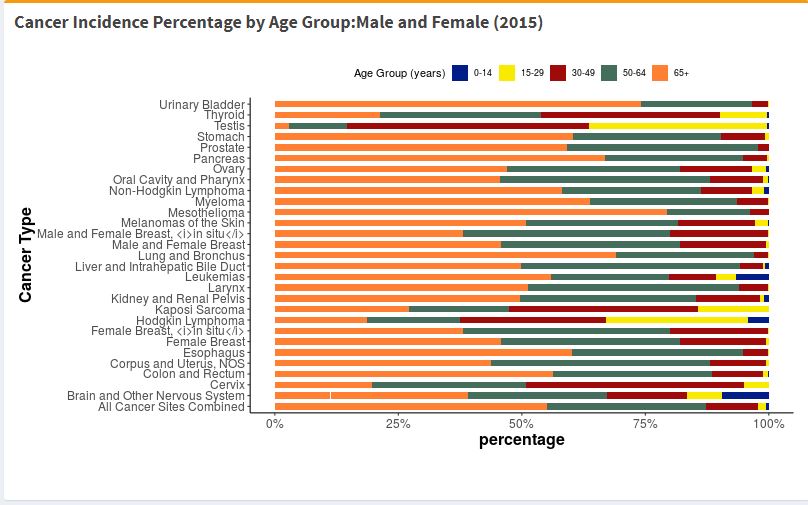 Incidence (or mortality) rates of each cancer type were estimated and shown in Figure 9. For example, the incidence rates of  prostate cancer, male and female breast cancer, female breast cancer, lung and bronchus cancer, and colon and rectum cancer are much higher than those of the other cancer types, which means the most common five cancers people diagnosed with in the U.S. in 2015.

The results clearly show that cancer impacts people of all ages, but it does not always affect them equally. Differences in genetics, hormones, environmental exposures, and other factors can lead to differences in risk among different groups of people. For example, the primary age group for thyroid and testis cancers is 30 - 49 (years), while the majority age group of the other cancers is 65+ (years). Overall, increasing age is the most explicit risk factor.

The most common cancers in each state are breast cancer, lung and bronchus cancer, prostate cancer, colon and rectum cancer, melanoma of the skin, corpus and uterus cancer, and bladder cancer. Moreover, men's cancer rates are higher than women's rates. When comparing groups based on race and sex, the cancer mortality rate is highest in African American men and lowest in Asian/Pacific Islander women.