It goes without saying that climate change is one of the biggest problems the world currently faces. With high fossil fuel consumption and deforestation, climate change is growing to threaten entire ecosystems. Such tipping points are the repeated warning of a majority of scientists who claim that the world needs to cut emissions in half by 2050.

The objective of the project is to illuminate the amount of emissions created by the global food supply chain, a key contributor to global green house gases. By visualizing this data I hope to create actionable insights for politicians, lobbyists, business leaders, or anyone who wishes to push their nation towards a more sustainable future.

Food system emissions start on the farm, to the market, then the kitchen, and eventually the trash. I will be using two metrics. One, is the annual green house gas produced by a countries food system. The other, green house gas produced per capita by country. The first metric is there to show the largeness of some countries output and the latter to show the efficiency of them. The data being used is from the European Commission's Emissions Database for Global Atmospheric Research, which published data on all countries food system emissions from 1990 - 2015.

I will be referencing data I visualized with this interactive map, built in R Shiny.

China, Indonesia, Russia, Brazil, and the US; the largest emitters of food system greenhouse gas, who also fall into the same categories on overall emissions. For emissions per capita: surprisingly, impoverished countries like Ghana top the list for most efficient. This is likely due to low trade rates of food and consumption of food that is grown from inside the country. The US and other large countries fall in the middle of this metric, where as impoverished ones fall on the extremities. 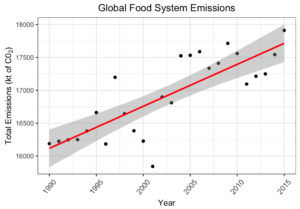 Above, I used simple linear regression to fit a straight line to total global food system emissions. Clearly, they're rising fast - at around 200 kt c02 a year. Below, I visualized the top 10 and bottom 10 emitting countries. 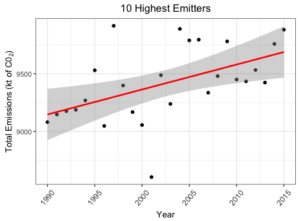 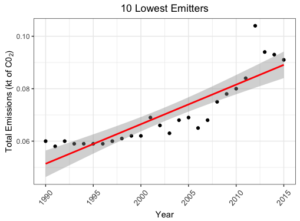 The top emitters are producing more and more greenhouse gas every year but at a lower rate than the low emitters are. Overall, the bottom 10 countries increased emissions +13.75% from 2010 - 2015, while the top 10 emitters increased only +4.5%. This raises the question: Should developed countries help developing ones build out sustainable infrastructure? 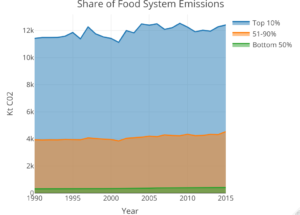 Above is the distribution of global food emissions. The disparity between the top 10% is very large compared to the bottom 50%; therefore, the most focus and resources should be put towards reducing the top 10%'s emissions.

While this data only tells part of the story, it's important to breakdown and identify all contributors to global emissions. Any work that can be done to clarify the crises is worth showing. Overall, it is up to world leaders and those in positions of power to steer us towards a sustainable future. Our biggest hope is that young generations will continue to push for relentless change until we have a largely carbon neutral economy.