How Do We View Rich People? Are They Greedy, Honest, Intelligent?

What do we think of rich people? What is rich? These questions were answered by Pew Research's data and the Rich People Shiny App.

Pew Research is a nonpartisan fact tank that informs the public about the issues, attitudes and trends shaping America and the world. It conducts public opinion polling, demographic research, media content analysis and other empirical social science research. Pew Research Center does not take policy positions.   Interviews were conducted by phone.  2.500 people were inteviewed and 189 variables taken. Data about the interviewee's income, opinions on race, political party, satisfaction with the government, and opinions on rich people.

After many variables on the interviewee were noted, the 3 questions were asked : a) Compared to the average person, do you think that rich people generally are more likely to be greedy? The answers were : More likely, Less likely, No Opinion, The same, Refused.  The next question substituted greedy for 'intelligent'. One more question substituted 'honest'.

The Rich People Shiny App will allow the user to select the State, Income, Age, Race. 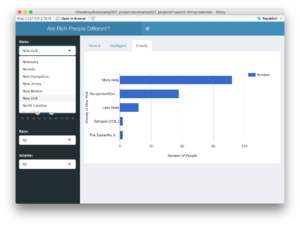 One can also select  'All' for States, and the question of Honest, Intelligent and Greedy and get a map of the United States with the percentage of people in each state selecting 'Most Likely' for the question.

View all posts by Valerie Molignano >

Gregory April 19, 2017
The post has actually peaks my interest. I'm going to bookmark your website and keep checking for new tips.

Aline April 17, 2017
Thanks for the excellent information, it actually is useful.