Countries are economically different in various regions of the world.  The residents of wealthier countries are not only better off financially, but they also tend to live much longer.  How does the living conditions compare? What could be a possible reason for this? This project visualizes the economic conditions of different income regions and identifies how these situations compare over time.   The data on this project was found in the databases of World Bank and the World Health Organization.

During my study on Economics at New York University, I had seen a clip by Hans Rosling in which he showed a fantastic presentation relating income and life expectancy of 200 countries over the last 200 years.  The presentation was interesting in that it showed how the countries became wealthier and healthier at dynamic intervals.  The countries each had its setbacks from sudden disease outbreaks and political disturbances but nonetheless followed a positive trend overall.  As each country grew healthier with medical advancements, the countries began to grow wealthier.  What I wanted to see were the recent changes and possible explanations for them.

I. How Does the World Look Now? 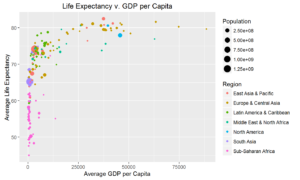 The GDP per Capita appears to vary widely after between the life expectancy of 70 to 80 years.  Most of the poorer nations seem to be from South Asia and Sub-Saharan Africa.  Interestingly there is a cluster formed within the longer living but still, poor regions found in the top left corner of the graph.  It appears as if there is a particular milestone that must be reached before such an expansion of income can occur. 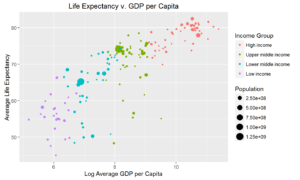 World Bank's metadata was used to categorize nations into 4 different income groups.  After taking the logarithm of the Average GDP per Capita, the plot revealed a correlation between the Life Expectancy and GDP per Capita.

II. How do Income Gaps Differ?

Income Gaps were calculated using the GINI coefficient of various countries reported by World Bank.  A higher income gap or a high-income inequality is expected to relate to lower values in both Average Life Expectancy and Average GDP per Capita. 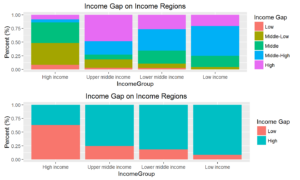 The first plot shows several interesting patterns.  There is a pattern in which a High-Income Gap (GINI >44.14) decreases from the Upper- Middle Income to Low-Income.  However, the Middle-High Income Gap (37.59<GINI<44.14) increases from the Upper-Middle Income to Low-Income.  This suggests that income grows increasingly concentrated among a select few as countries develop.  However, it also shows that there is a greater barrier to entry to wealth among poorer countries as the distinction between the wealthy and poor grows.  This is highlighted in the second plot where overall income gap separated into two levels (High = GINI>34) is shown.  While wealthier countries have an extreme concentration to the select few, the overall spread of wealth is more even than in the poorer countries.

III. What Causes Such as Life Expectancy? 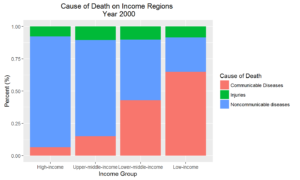 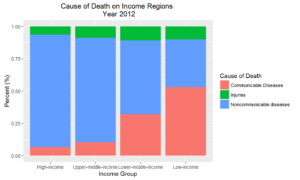 Low-Income nations suffer from high rates of communicable or contagious diseases caused by bacteria, viruses, and other microorganisms.  Unfortunately, infectious diseases also affect the entire population regardless of age, and because of that, the residents face an earlier death.  The development of medicine, vaccines, and clean environment allow wealthier nations to avoid such illnesses.  The Low-Income regions are not without hope, however.  Over time, cases of communicable diseases are decreasing at a rapid pace, indicating better health and greater longevity. 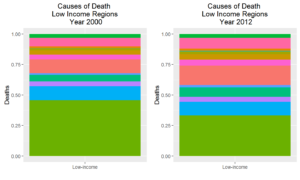 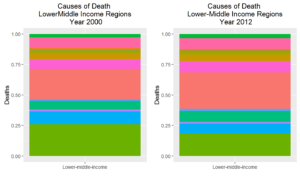 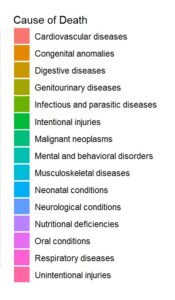 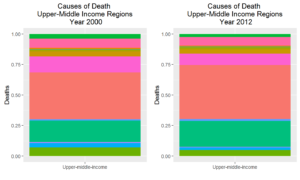 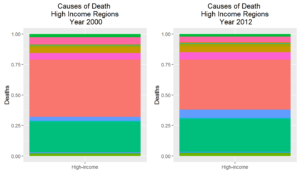 As noted previously, communicable diseases such as infectious and parasitic diseases are much frequent in the Low Income Region than any other regions.  Fortunately, there is a definite decrease in such diseases over time everywhere.  However, cardiovascular diseases and malignant neoplasms rise over the years and as countries grow wealthier.  This appears to be a direct result of longevity. 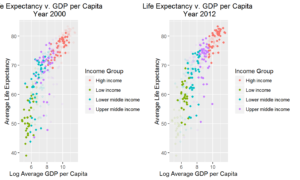 The benefit in the lower mortality from communicable diseases is evident.  In the year 2012, while all income groups saw a growth in both life expectancy and GDP per capita, it was especially more noticeable in the lower income groups which saw an adamant boost. 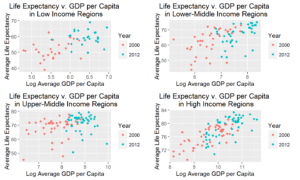 There is a strong positive relationship between Life Expectancy and GDP per Capita.  Residents of countries with higher income typically not only earn more money but also, live longer.  Wealth appears to be more accumulated to the elites in higher income regions, but the real gap between rich and the poor is much evident in poorer countries.  Finally, mortality by communicable disease is a serious threat that affects low-income areas, but the conditions appear to grow better over time.

In the future, this project would be updated in Shiny in which the data in between years can be shown to show a more fluid movement in time.  Other factors should be considered in visualizing the economic situation of the country such as the form of government, primary level of production or industry, and economic conditions on gender.