Attempting to see what is not shown in PDF reports of USCIS.gov

The two main goals of this visualization project were:

The data at hand is the quarterly reports on the number of petitions and applications for lawful permanent resident (LPR) status based on a family relationship with an LPR or U.S. citizen.

As it turned out, there was no unified dataset, that would contain all the quarterly reports in it. In addition to that, the CSV files for each report provided by USCIS.gov were not organized in a Data Visualization or Data Analysis friendly manner. This CSV files simply mimicked their PDF versions. 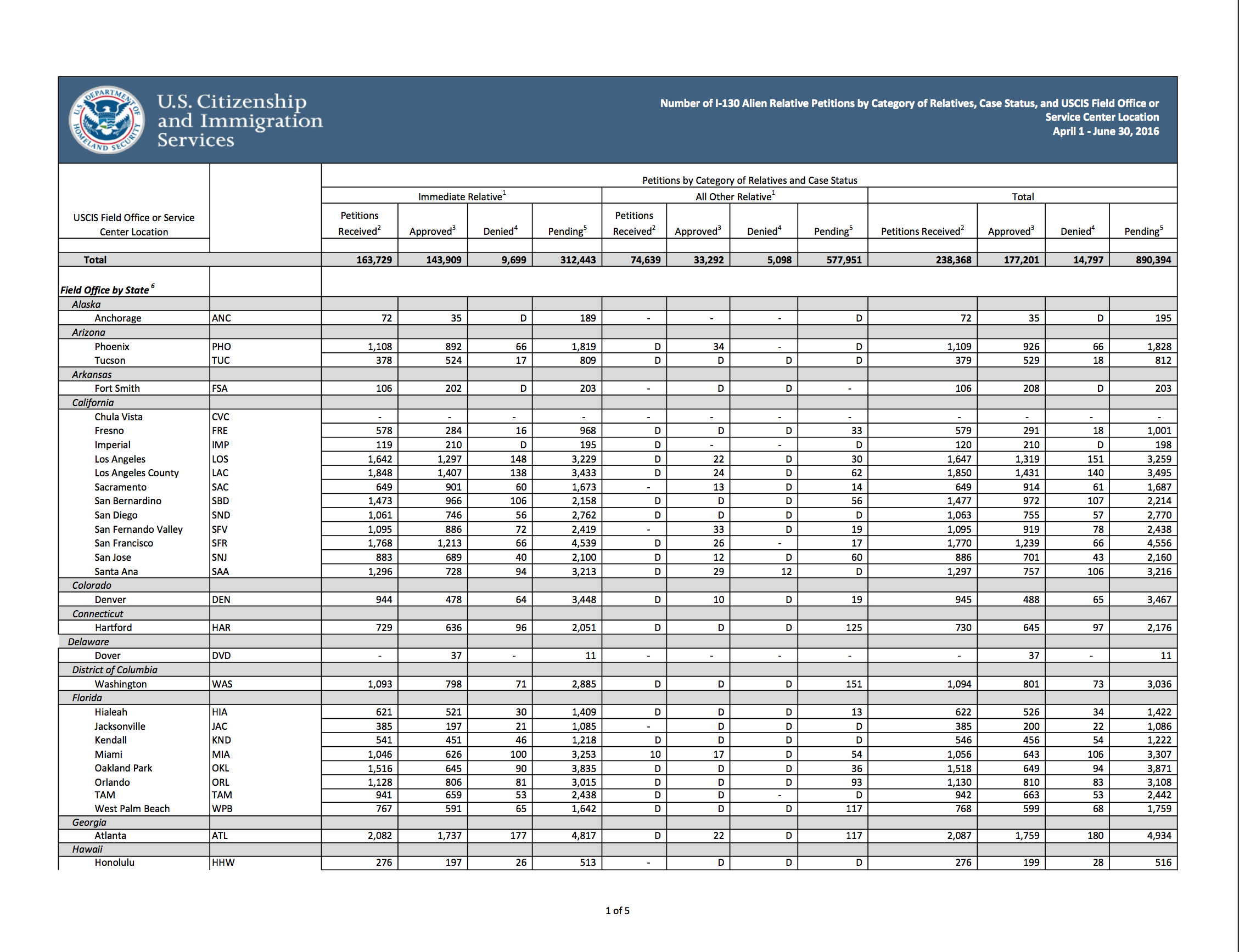 This is the first page of the PDF of the 2016 3rd Quarter Report.

The following is the look of the CSV file provided by USCIS.gov 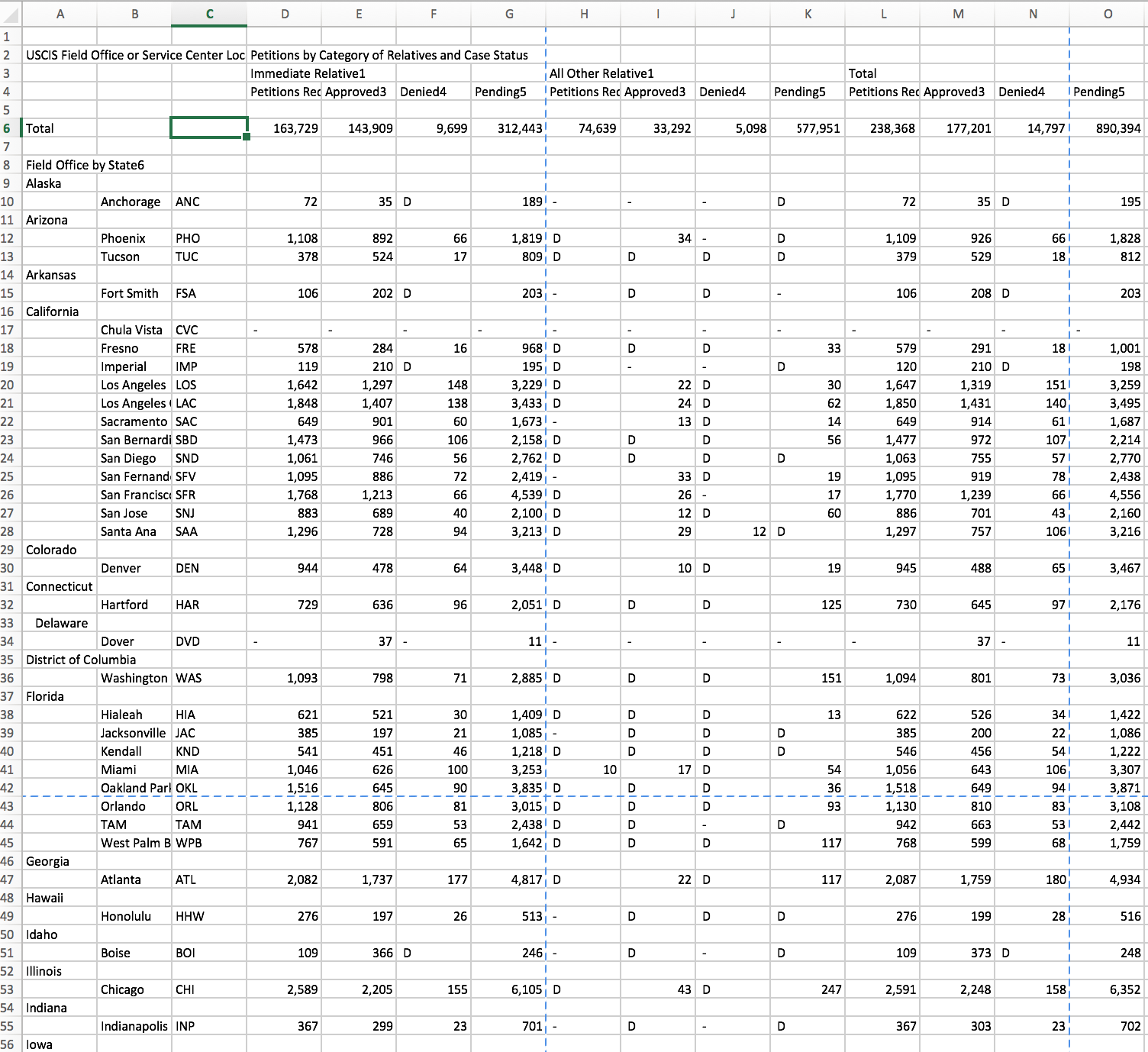 Eventually, after cleaning the data, reorganizing it and reshaping the dataset, it was brought to a state where I was able to start my Exploratory Visualization. Bellow is a graphs representing the number of Approved applications for the category "All Other Relatives". This is actually the category where I, and my petition for my family fall into. Looking at this graph, I sadly realized a sudden drop of the number of applications approved after the 3rd Quarter of 2015. 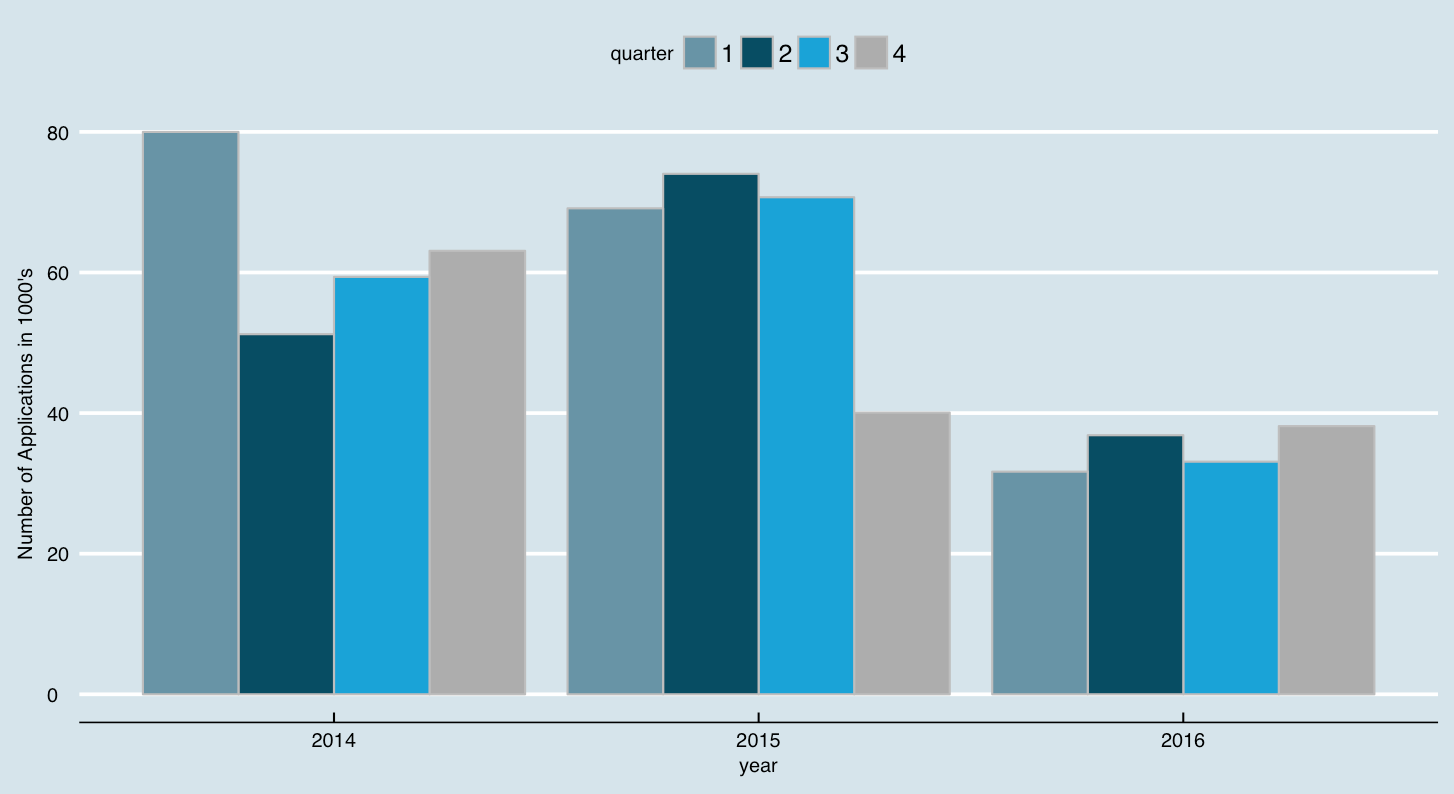 The numbers are not fluctuating as sharply in the Graphs of  "Number of Applications Received", which could possibly be the cause. 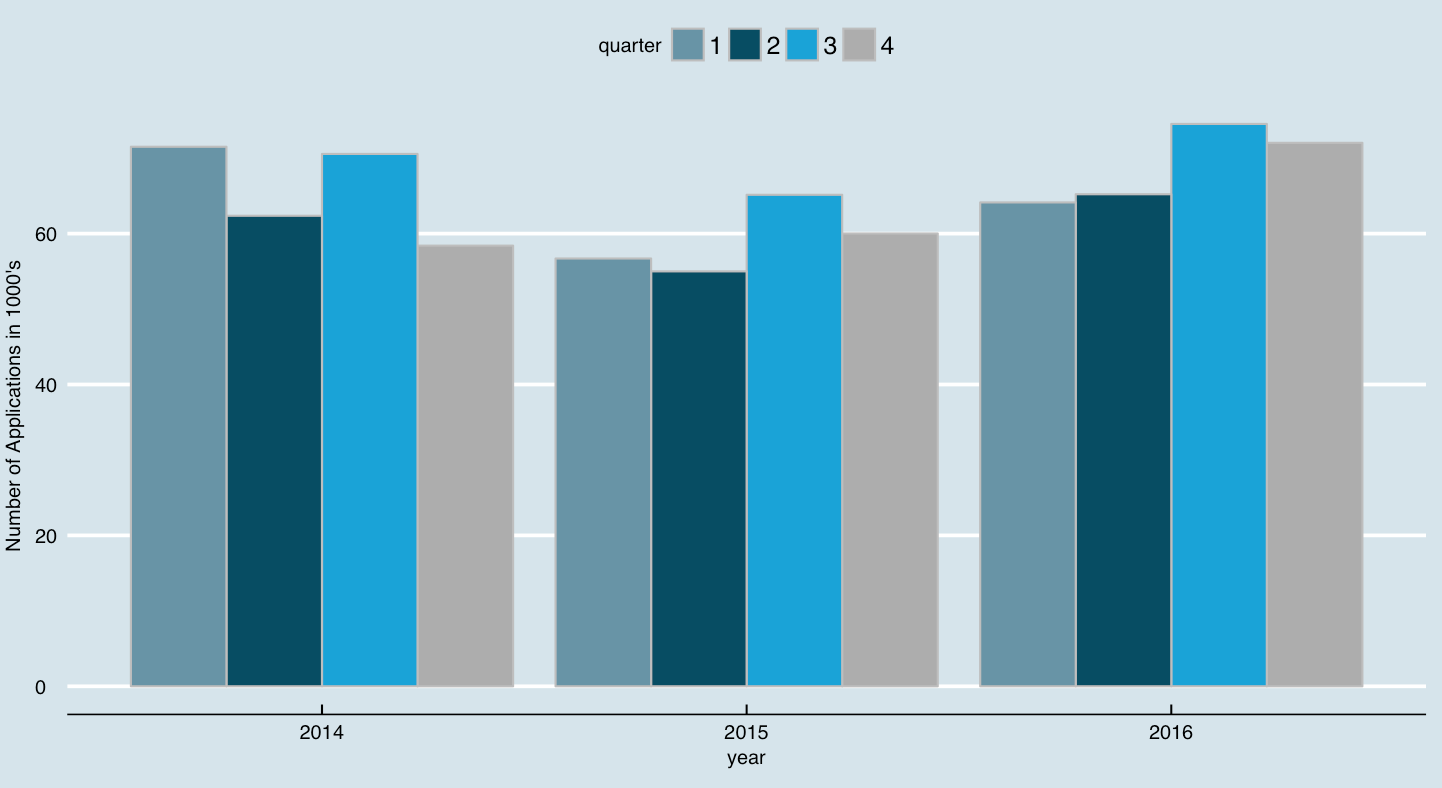 The 80/20 rule showed itself in my work. 80% of my time and effort was spent on cleaning the data and reconstructing it to feet my needs. Bellow are some screenshots that demonstrate the '80%' part. 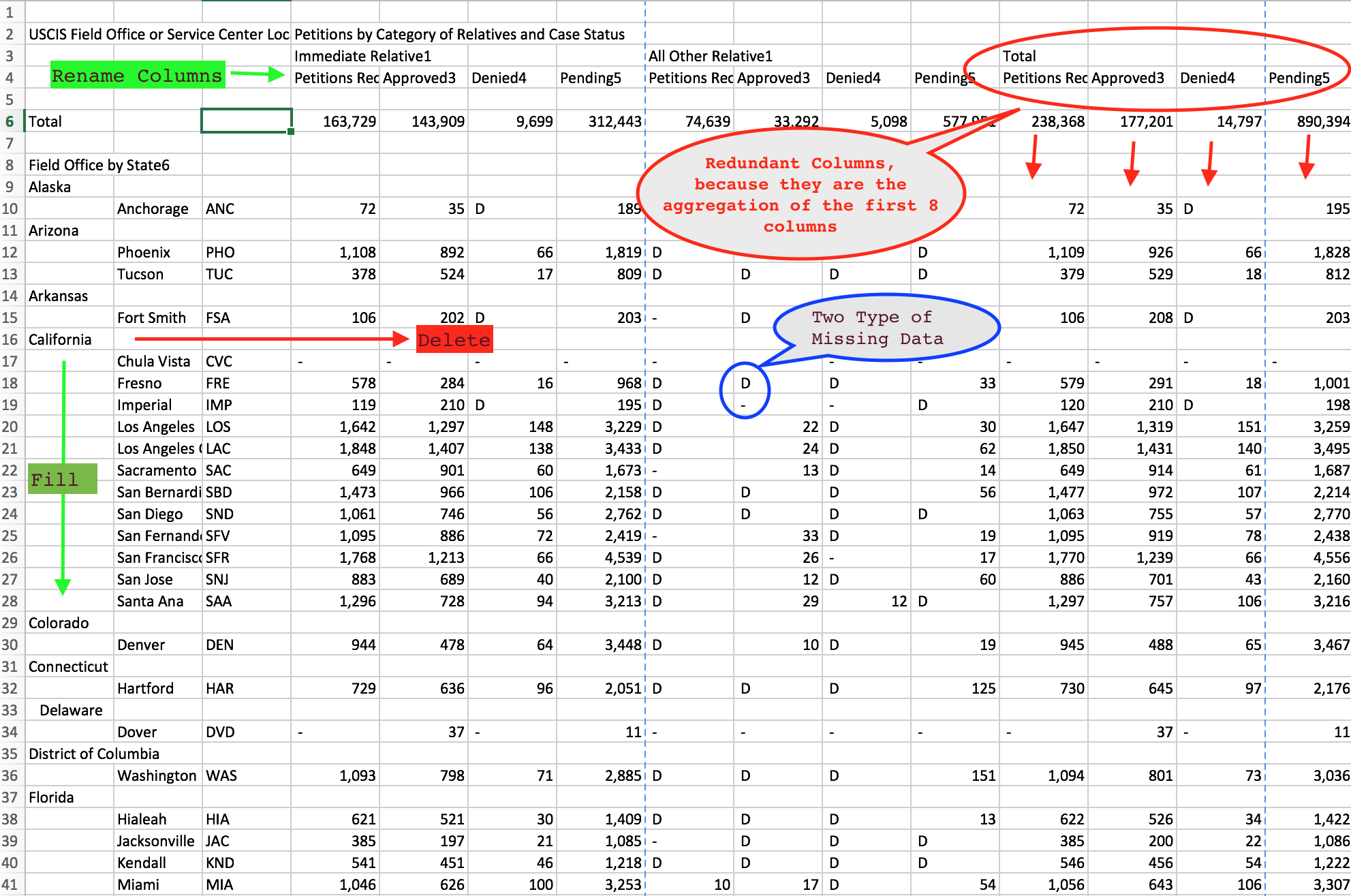 In total, to constrict a dataset containing information of 3 years, i had to clean 12 such CSV files. In addition, it seems that USCIS does not have some set standard of writing those CSV files, so every year the shape and the way the information was written into CSV would change. For instance, the data from 2011 is written in a one CSV file, and it has a horizontal shape, because there are columns of information for each quarter for the whole year. Since my goal was to create data set, in which each column represents 1 type of variable (for example, a column that has the "Number of Received Applications", or another column with "Numbers of Approved Applications"), instead of representing the same variable in different 'flavors' (for example, "Number of Received Applications, 1st Quarter, 2014", and another column with "Number of Received Applications, 2nd Quarter 2014"), the cleaning and reshaping the earlier dated CSV files was out of question. That being said, I do intend to work and expand the dataset, so that with the longer time period I can make better predictive analysis.

An example of 2013 1st Quarter dataset CSV file is bellow.

Overall, the satisfaction of seeing a some coherent graph, that gives one a tangible perspective was worth every minute of my work. Seeing the result, even if it is a very simple histogram, does motivate me to continue with developing my data set, possible finding other sources of data and answering questions such as "Is the system used by U.S. Citizenship and Immigration Services working productive, to its full potential? Can the data analysis and modeling help improve it, and possibly show its inefficiencies in some areas? How can we shorten the wait time for all those families who wait to be united and are separated because we are spending our tax money one a "Brocken Machine"...

My main interest in Mathematics, in conjunction with my studies in Behavioral Economics and Philosophy, helped me to hone down to choosing Data science as a career. I see data science as an excellent ‘experimental lab’ where I...
View all posts by Vahe Voskerchyan >