The World Bank has compiled data on many countries across a span of decades. This data includes information across a number of categories, such as Agricultural and Rural Development, Aid Effectiveness, Climate Change, Economy and Growth, etc. Given the sheer volume of data, there are a number of interesting visualizations possibilities. . These include a world map showing the distribution of data across countries, comparing two countries in a certain metric, looking at the change of a metric across time for a given country, checking the correlation of two indicators for a given year and country, etc. This Shiny app attempts to display some interesting features of some of the indicators.

The World Bank has a database which contains  indicator data that spans several decades. It also has an API that allows a user to access information quickly. There are two libraries in R that allow one to connect to the World Bank database: wbstats and WDI. Rather than downloading the data onto a local machine, I decided to use the WDI library to access the data. Using the library and WDI API allows quick access to the information without having to waste space storing it locally.

The image below was generated by setting the year to 1993 and the indicator to GNI per capita. We can see that countries such as Russia and Brazil fall in the middle of the countries in terms of their GNI per capita. 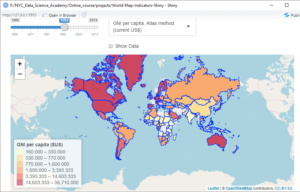 The image below shows the GNI per capita for the year 2013. We see that Russia and Brazil have made significant progress with respect to their position on GNI per capita. The user can use the world map to check for changes in a country or region, and generate hypotheses to explain the observed changes. 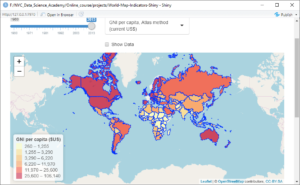 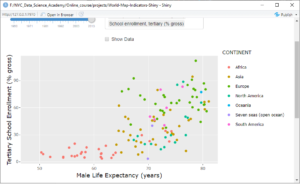