It’s undeniable that drinking water is essential to all humankind. Our quality of life is contingent on the proper quality or quantity of it. In fact, Andrew Wheeler, the head of the Environmental Protection Agency, states how drinking water is currently a bigger problem than climate change by the sheer amount of people dying from contaminated water. The dangers of contaminated water is not limited to third world countries but also exists within the USA. When I heard about the water crisis in Flint, Michigan, I decided to look more into the details of what really affects the quality of water. 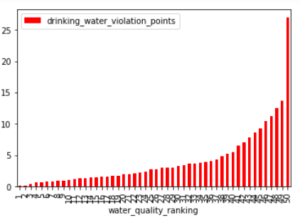 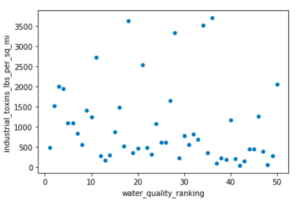 However, surprisingly, there were no strong correlations between water quality ranking and pollution ranking or industrial toxins. Even without the outliers of the amount of industrial toxins, the correlation tends to have less toxins as the ranking gets lower when I had hypothesized the opposite. With confusing results, I led myself to expand the scope to look into the ranking of pollution. 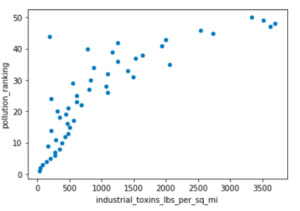 While pollution ranking and the industrial toxin levels of each state don’t seem to highly affect the ranking of drinking water quality, they seem to have a high correlation between them. To narrow down why there is such a high positive correlation with industrial toxins but not with quality of water, I generated a few more comparisons regarding the amount of industrial toxins per state. 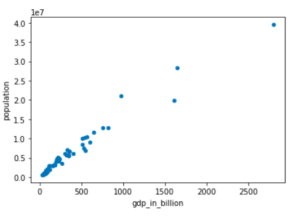 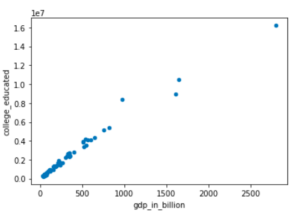 I found that GDP tended to be higher when there was a larger population and a higher percentage of college educated people - indicating that when there were more people, especially educated people, in the states, the state would get richer and tend to solve toxin problems.

While I was able to learn more about industrial toxins and pollution levels, it was harder for me to find out more about the features that affect the water qualities for each state, which led me to do some more research on it. Though industrial toxins and overall pollution is a result of human action or inaction, water quality is largely dependent on many geographical and geological factors beyond human control. Some factors include sedimentation, erosion, dissolved oxygen, pH, runoff, and decayed organic materials. Because of the wide range of contributing complex factors, it is difficult to graph a direct correlation between water quality and any one factor.

Being unable to figure out about the true features that affect the water quality leads me to hope for more data about the geographical and geological features for each state, which could be used to conduct more research about the water and how to improve it. I also hope to accurately identify outliers in my data analysis and configure the results and correlations accordingly. Through this, I want to provide data that might help improve the quality of water in the states by careful analysis of contributing and correlating factors.