Getting There - Waze Vs. Google Maps

Many people rely on navigation systems when driving either because they’re unfamiliar with the neighborhood or because they want to find the fastest way with real-time updates. The most popular navigation apps are Waze and Google Maps, but what makes people pick one over the other? Is it because one has more positive reviews, one listens to complaints more, or simply because the layout of the app? What are the interesting trends that stem from the reviews of these companys, and could these questions be answered by looking at review trends?  To find the answers to these questions, I resolved to scrape reviews of both sites.

Method
To scrape the reviews of Google Maps and Waze, I used Selenium. The reason for choosing Selenium over Scrapy was because the website is an infinite scroll, the URL does not change and only Selenium can capture that form of data. Scrapy uses changes in the URL to help scrape data, which doesn't apply in this case.

To grab the data I scrolled to the bottom and clicked on a button to show more reviews. After the click,  the website would load more data. Then Selenium would scroll down more until it hit that same button and continued the process.  However, working through it was a bit more complicated than expected. I needed to add a wait response, to instruct Selenium to wait after it did the first scroll until the next scroll loaded until continuing to run. The challenge was that sometimes it took a long time to run, so I needed to give it enough time to rest before continuing to scroll. Another complication was that Selenium could not recognize the "show more" button due to the apps at the bottom of the screen. As a result, when it scrolled all the way down, it would not press the button and would break the command. Therefore, I had to program it to go up just the right amount to enable it to recognize the button and click it to continue scraping. Lastly, the Xpath (It is a syntax or language for finding any element on the web page using XML path expression) for the first "show more" button was different than the rest, so I had to instruct Selenium to first use that Xpath and for the rest use a different Xpath.
Waze and Google Maps each had over 7 million reviews. As Selenium operates on the slow side scraping all 14 million reviews would probably take over a week. I opted to take a sample and let the program run on each app for 100 scrolls. That took about two and a half hours, during which only 5,000 reviews were scraped. So in total, I scraped for 5 hours and got 10,000 reviews for the two sites combined.

Results
The process scraped 5,000 reviews for both Google Maps and Waze. The data gathered was; the review was written, who wrote the review, what the review said, and how many stars each review received. The next step was to analyze the data collected. Which began with some NLP(Natural Language Processing) and word clouds. 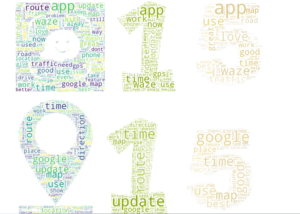 I separated the words clouds based on the number of reviews. Therefore, the words listed in the number 1 and words listed in the number 5 are the words of reviews that had one star and that had five stars.
The Google Map icon and Waze icon are the general words from all the reviews that I scraped. One consistent word was an update in Google Maps, which could either mean that people are requesting the app to update or that they like the update the app has just done. Waze has this word as well but not as consistent. It shows that both apps made updates or need updates. One word that Waze has that is missing in Google Maps is the word "features". It seems that people like the features on Waze more.  One word that stands out for both is “time.” It seems like most people use these apps to help them find quicker routes and get places faster. This is a benefit, but it also could be a critique if it does not work as well.
For the number "one" stars in both Google Maps and Waze, the word “route” appears. This indicates that people are not so fond of the route the app took them and perhaps it took them on toll routes. Another thing could be, that I know from personal experience, is that Waze will change routes in the middle of a drive. One time I specifically chose a route without tolls and in the middle of my drive, Waze changed routes. The new route was two minutes faster but had tolls, which I explicitly wanted to avoid. Additionally, the word “update” appears very often in Google Maps but is missing in Waze. That could be a positive thing for Waze if they are not telling it to update or that they do not like the update.
For the stars with number five, the big words with Waze are “traffic” and “road.” This could indicate that Waze helps people get out of traffic and find better roads. People appreciate this feature and think positively of the app. On Google Maps, the five star big words are “help” and “place.” It seems like it helps people get to places that they need to go. This could have to do with driving or even walking and taking public transportation. This is something that Google Maps has but Waze is missing. From these words, we can gain a sense of what people are talking about and what they like and dislike about the apps. 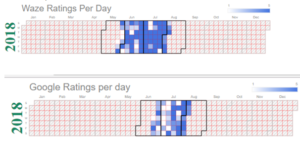 From this graph, one is able to see different trends that reviewers had over time. The colors are the average rating for that day. The words are white. The review ranks are indicated by shade, the darker the blue, the more positive the reviews. This would have been a robust graph had I scraped more data, but time was not sufficient. However, from here, one is able to see that Waze had some negative comments at the end of May, fixed most of the bugs in June, and in July they got it just right. At the same time Google Maps ratings were not getting such positive reviews, however, close to the end of July they seem to have fixed what people did not like, and in August they became pretty strong. It is possible that they fixed the issue that people were complaining about, or it could possibly be a new update with the app that people were unhappy with. On a positive note, both apps look like they recently made positive changes that people are happy with, and it looks like they do value what customer reviews say. 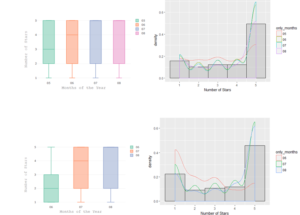 These graphs show the difference in stars over the past few months. It seems like the medium for Waze in May was about three stars. The density plot shows the least five stars and a pretty high amount of three stars in May. For the rest of the months, it is pretty similar to the density plot; number five stars have the biggest peak, and the rest are all quite behind. In the box plot, one can see that in July their ratings went up to an average of four, and then the following months their average was five stars which indicate positive progress.
For Google Maps the month of June appears to be a downfall. The boxplots show their average is a "two", and the density plot the stars of number "one" is much greater than any other number of stars. The stars for number "five" is second to lowest, however, they improved from June to July, and their average rose to a "four" with a high number of "five" stars. The stars for number "one" is also a little high, but it is far out-shadowed by the number "fives". In August the average for Google Maps is five, and they got much better reviews. This proves the same conclusion that they have improved over time, and it looks like they value customer reviews and pay close attention to what people have to say.

Conclusion
In conclusion, there was not one factor that made either app better. They both look like they are making progress and listening to reviews. The words from Waze are a bit more positive than Google Maps. but in total it looks like it is just a matter of what people are used to. There is no indication that one is much better than the other; they both have positive and negative aspects and help one get places safer and faster. However, one does see that both apps have made changes from time to time to help satisfy their customers. This displays the power of reviews. Both apps had more negative reviews in June and then they made changes to please their customers and help make the reviews more positive.

View all posts by Shani Fisher >