We run faster than you: Factors affecting marathon results

We run faster than you: an analysis of marathon results from Switzerland

The Jungfrau is one of the main summits in the Bernese Alps in Switzerland. Each year, thousands of people choose to run a marathon through the valley...and up the mountain. In 2010, I was one of them.

On one of the steeper sections, an elderly gentleman flew past me. What had just happened?! He was not the only person with grey or white hair running in the marathon. In addition, Swiss citizens were distinguished by a different color number start number. I noticed the Swiss cheered a bit louder for their own. So where do people come from who compete, and do the Swiss have a home-field advantage? This blog article will answer these questions.

The data was scraped using Python from the Jungfrau Marathon Website. Data for the years 2015, 2014, 2013, 2012, and 2010 were collected. Other years were not collected for this analysis because they used a completely different website format. The data analysis was done in R. Click here to see the Python and R code.

Both external and personal factors affect your marathon times

All factors which influence your marathon time can be easily split into external factors and personal (internal) factors. In this blog article we will investigate one external factor, the number of participants in the race, and three personal factors: gender, age, and nationality. There are myriad additional factors which could be considered but were not available in the scraped data, so we will limit our analysis to these four.

There were 15% fewer race participants in 2012 as compared to the average: around 3200 compared to an average from the other years of nearly 3800. Interestingly, 2012 had a higher median race time than the other four years. The drop in the marathon times in 2012 could have been due from many faster runners deciding to not participate or harsher conditions.

The mean of the race times of one of the years is significantly different from the others. This difference might appear significant to anyone looking at the boxplot, but in order for it to be statistically significant, a statistical test called a one-way ANOVA must be used to determine if the mean of race times of one year significantly deviate from the mean of other years. The test calculates the probability that the values from one year will be observed had they been drawn from the distribution of race times represented by the other years. In this case, the probability is less than the commonly-used cut-off value of 5% (p-value 0.0003). This means there is not just a practical difference seen by plain observation of the boxplot but also a statistical difference.

The results: 1. there almost no chance of seeing the race times from 2012 if they came from the distribution of times represented by the times from 2015 (p-value 2.2e-16), and 2. the variances of the the two distributions are not significantly different (p-value 0.427).

Your gender appears to impact your time 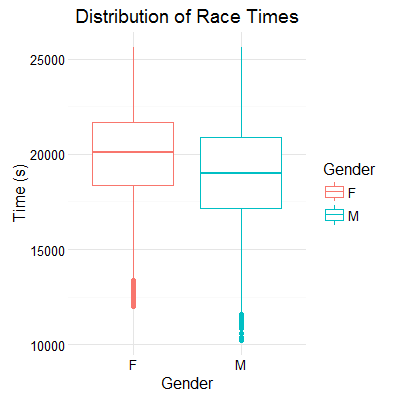 Your gender appears to affect your race time, but statistically the two cannot be compared. Why not? The assumption that the two distributions are similar, meaning they have the same variance, is not true. To determine if the means of two distributions are significantly different, a statistical test called a two-way T-test is performed. The result shows that indeed the mean man's time is significantly less than the mean woman's time (p-value 2.2e-16). The test which checks if the variances of the two distributions are similar, the F-test, shows that the variances are indeed significantly different (p-value 2.2e-8). The assumption needed to claim the result of the T-test is not true, invalidating the T-test and not allowing a direct statistical comparison of the two genders.

Your age appears to impact your time

The subjective experience of being passed by an elderly person was shown to not extend to the whole race population because the age group bins cannot be directly statistically compared. The F-test, being in this case a ratio of variances for the age groups [17,35) and [57,77], indicated that the variances are significantly different (p-value 2.2e-16).  The median time visually increases with age when the ages were binned into seven equal quantile bins, but the statistics are not able to confirm this observation.

Proximity to Switzerland influenced who participated

The race roster showed that Switzerland had the most participants and four of its neighboring countries were in the top ten: Germany, Italy, France, and Austria. Non-bordering countries rounding out the top ten were Great Britain, Netherlands, Belgium, Luxembourg, and USA. The US was the only non-European country in the top ten.

The Italians are the fastest

The Italians proved to be the fastest out of the top five participating countries, edging out host country Switzerland in median race time.

The one-way ANOVA indicates one of the group mean race times is different than the others. The F-test shows, however, that, like age and gender analyses, the mean race time of Italians also cannot be compared to that of Switzerland due to differing variances (p-value 1.42e-06).

Investigating the boxplot closely shows that the range between the bottom and top of the box (interquartile range) of the Italians appears larger than the other nationalities. This invalidates statistical comparisons of their distributions with the two-way T-test. That of the Germans and Dutch are more similar.

Gender does not change time distribution by nationality

So if the Germans are faster than the Dutch, does this apply to both genders? Surprisingly, the nationalities were the same when considering median race time across genders. Perhaps partners train together and therefore have a similar race profile? That, however, is an analysis for another time requiring additional data.

- The Italians have the lowest median time
- Gender does not change nation rankings
- Age is running still matters: younger is better