During the recent NBA playoffs, the Cleveland Cavaliers suffered multiple key injuries to some of their star players: Kevin Love and Kyrie Irving.

With a very top-heavy roster in terms of talent, this tasked Lebron James with the challenge of carrying the team. James is the best player in the NBA, and immediately saw a large uptick in traditional NBA counting statistics.

Despite this, we were curious if James' efficiency changed, as it seems logical to see an adverse effect when losing the presence of great teammates.

Before we could dive into the analysis, we had to scrape the data from NBA Reference, a website that stores all historical data concerning the NBA.

Using Python, one is able to access the underlying data inside the HTML’s Document Object Model (DOM) and eventually store this information as a comma-separated value (CSV) file.

A common first step is to load useful libraries, and in particular, for web-scraping the BeautifulSoup library is very handy.  In addition, Pandas and Seaborn libraries were imported for data analysis and visualization, respectively.

Upon investigating the DOM, there are various tags in the tree structure, and in particular the "thead" and "tbody" elements had the information of interest.  The "trick" was to use these object's methods to form the rows and columns objects, which eventually are used to form a friendly Pandas dataframe object. 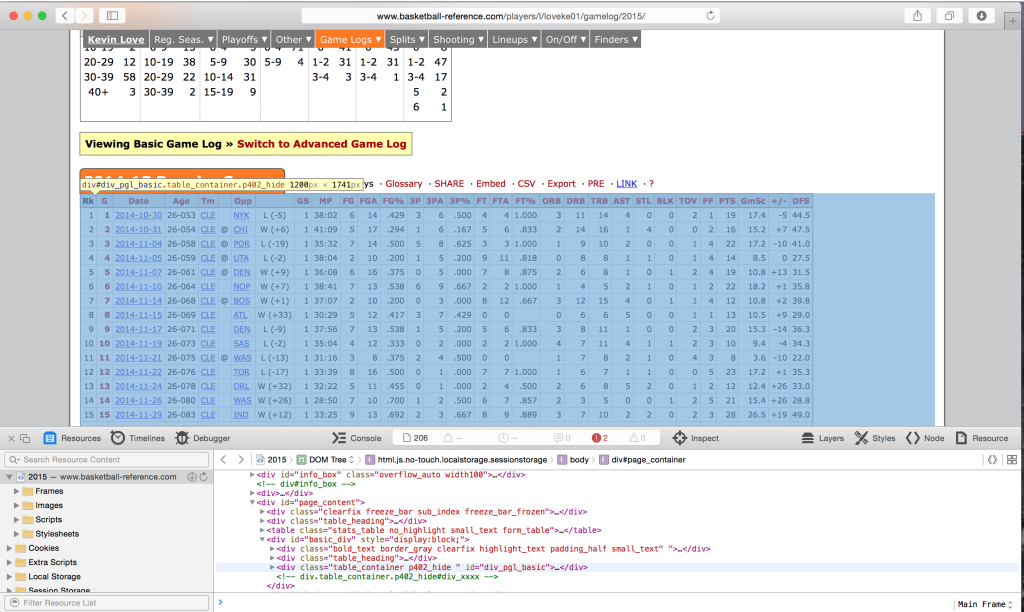 Once the HTML data was stored into a Pandas Dataframe object, a quick inspection shows that there are duplicate rows, columns with missing names, and that the numeric values are not actually numeric, but strings (which is much more difficult to analyze statistically).

Once the data has been cleaned, it was checked against the CSV file provided  by the website.   When comparing the files, they looked very similar, and confirmed the values generated by the HTML web-scraping were accurate. 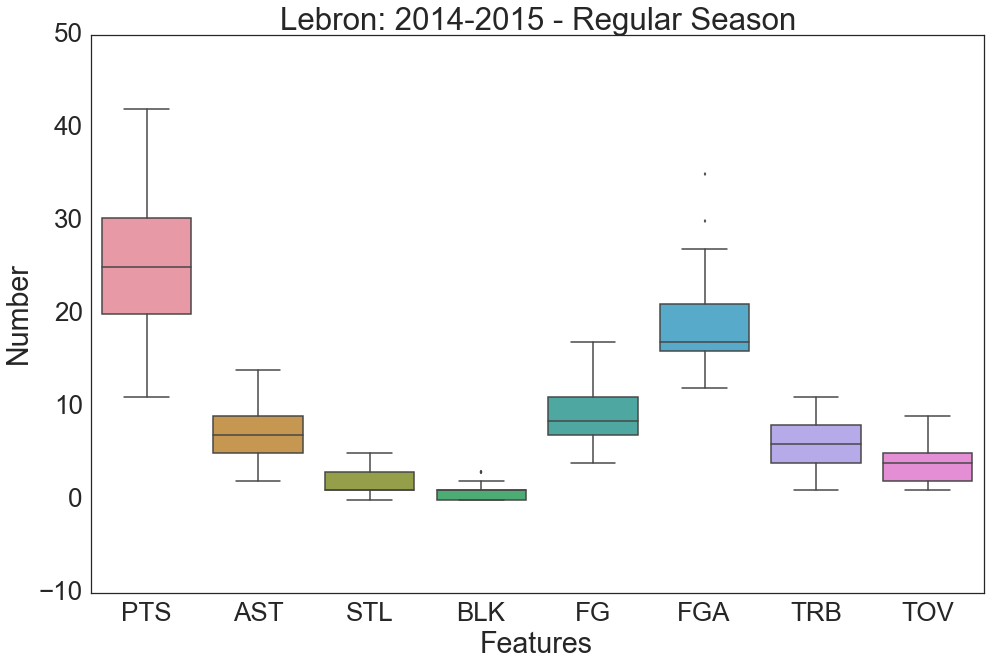 For a preliminary analysis, various box-plots were created using R to visualize the impact of the prescience of Cavalier teammate's on Lebron James's performance. 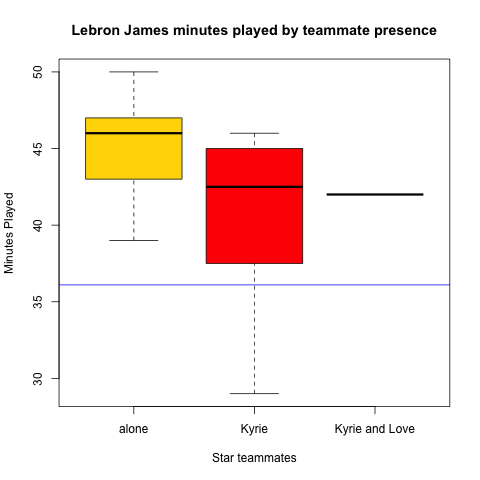 As seen from this first boxplot, the data was not evenly distributed. Out of 20 play-off games, only three featured Lebron, Kevin, and Kyrie in the same lineup.

During the regular season however, all three players participated in almost 90% of the games together.  We felt this added a better baseline of consistent performance, and Lebron's average regular season statistics are represented by the blue line.

Even without considering teammates, Lebron clearly played a lot more minutes in the playoffs relative to the regular season.

That said, when both Kevin and Kyrie were hurt, Lebron played more minutes in every game than his averages from any other situation. 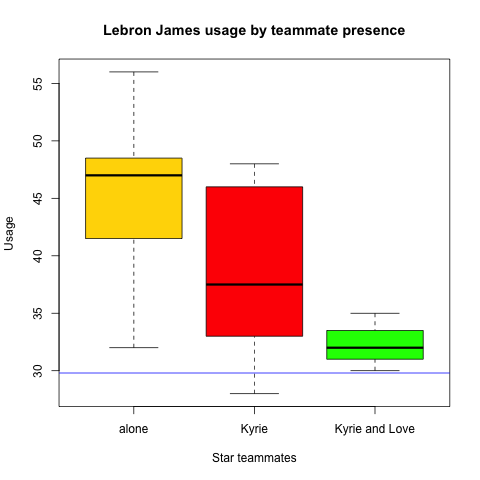 Trying to gauge how often Lebron had the ball in his hands, we defined usage as the summation of shots attempted, assists, and turnovers.

This appears to support the hypothesis that NBA teams constantly funnel the ball through their star players. 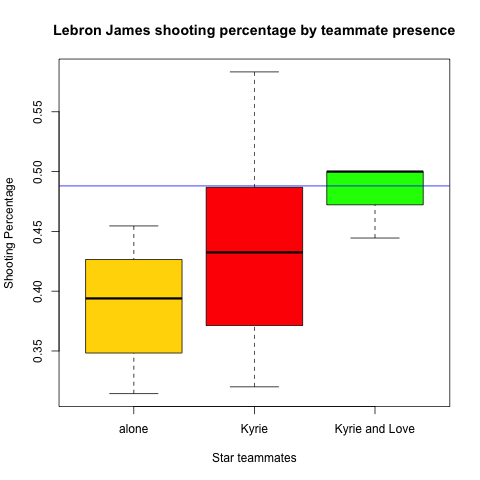 The final box-plot tested our main question: How did Lebron's efficiency change as his usage went up?

While the trend downwards is quite clear, it is worth noting that Kevin and Kyrie got hurt at different points in the playoffs, and the Cavaliers were facing tougher teams over the course of time.

While it would be natural to assume that Lebron's efficiency fell dramatically as his teammates got hurt, it is also possible that the increasing strength of his opponents was just as significant of a factor, if not more.

View all posts by Joseph Russo >

http://rubyslape.wordpress.com/2015/06/24/is-hammertoe-surgery-successful August 21, 2017
I'm not positive the place you are getting your information, but good topic. I needs to spend some time finding out more or figuring out more. Thank you for fantastic info I used to be in search of this information for my mission.

strider toddler bike February 16, 2016
With all the pleasing features, the pros obviously outweigh the cons of this product. But what if you have already co-signed for a car loan. If you also think the same and want your child to develop then educational toys is the answer to all your problems.

strider toddler bike February 9, 2016
First, Cobb worked patiently with Norman and taught him how to ride a scooter. Also, you need to set a schedule for exercise so that the biological clock of your body is set. Here's a way you can polish your long putting: First, don't go for an opening.

cheap kazam bike review February 9, 2016
Since, the cycle trainer is a qualified & experienced person having enough knowledge & experience to guide you through the right path. Dee Dee has been training at Florida Fitness Concepts since 1994. You should be able to make your own health potions, PP potions, and Pokeballs.