The Devil Lies in the Details. Can the Yield Curve be a Market Predictor? 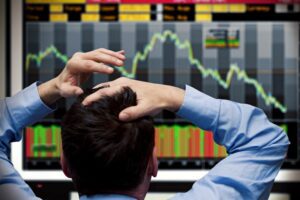 The Treasury yield is the return on investment, as a percentage, on the U.S. government's debt obligations. It is the effective interest rate that the U.S. government pays to borrow money. Treasury yields also influence the interest rates that individuals and businesses pay to borrow money to buy real estate, vehicles, etc, and they essentially tell us how investors feel about the economy.

On March 29th, 2022, the 2-year Treasury Yield topped the 10-year Treasury Yield for the first time since 2019. Soon, a flurry of articles from multiple news outlets headline a "recession warning." Historically, when the term spread - the difference between long-term and short-term interest rates - turns negative, a recession follows. If this is the case, as a retail investor, what does this mean for the market (S&P500)? Is there some investment strategy that can be applied when the term spread FIRST inverts?

What is a yield curve?

In a normal yield curve, short-term bonds have a lower yield than long-term bonds. These long-term bonds are subject to higher risk (greater probability that interest rates will rise within a longer term period and they are more sensitive to interest rate change), so the market expects a higher yield in return. This is the most common yield curve, and implies stable economic conditions.

What is normal and what is not?

If we take a look back, we can see that at the end of March 2021 (Q1), the Yield Curve was normal. At this point in time, the Federal Reserve (the Fed) was still describing inflation as "transitory." Fast forward 9 months later, and we see that short-term bond yields are starting to increase. It was also around this time that the Fed retired the word "transitory" to describe inflation, hinting that there may be future problems.

However, the Fed didn't come out and say they were increasing rates officially. After the FOMC meeting in March of 2022, the Fed decided to increase federal fund rates by 0.25% or 25 basis points (bp) with projections of six further increases up to the end of 2023. The differences in each line in the chart below showcases the market's outlook. In the most recent timeframe (red line), we see that the 2-year yield has jumped up tremendously, accounting for these possible six rate hikes. 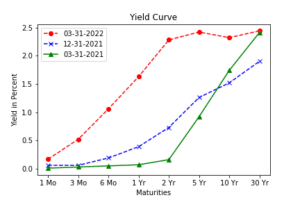 Although we are not at an "inverted" yield curve, we are starting to see a flattening curve, implying uncertain economic conditions. Usually these flat yield curves can happen at the end of a high economic growth period that is leading to inflation and fears of a slowdown or when the Fed is expected to increase interest rates. Seems like what's going on right now.

1. What Spread Term should we focus on?

Of course, we must take a look at this ourselves; perhaps we will find something that these news articles didn't mention. First and foremost, we must decide which spread to look at. Most traders watch the 10-year/2-year spread, whereas the Fed and academic studies pay attention to the 10-year/3-month spread. 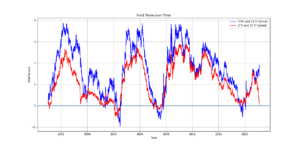 After plotting both, it's clear to see that the spreads move very closely together. I decided to go with the 10-year/3-month spread to explore as that is the one the Fed watches, but it is worth noting the divergence that happened in March 2022.

2. Does an inversion happen before every recession?

After highlighting the recession years (found from the Fed), we can see that besides the inversion in 1998, the 10-year and 3-month spread has gone negative before each recession. For this project, we are ignoring the recession in the early 90's since the Treasury Yield data starts in 1990, so I cannot confirm if an inversion happened prior.

So, out of the four most recent inversions, three recessions have followed. Remember, we are looking at this through the eyes of an investor. We want to know if there is something we can do as soon as the spread turns negative. At a quick glance, it does look like the S&P500 (SPY) ends up falling during the recession. Does that mean we should sell and buy in later? 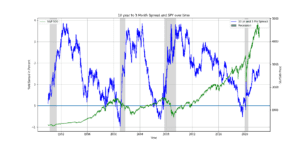 After further examination, one thing that I found was the spread actually goes negative multiple times prior to a recession. I will go over this at the end, but for now, I decided to group up these inversions by six months i.e. if the spread inverts multiple times in a six month period, I count it as one inversion. So, let's see how the market performs 6 months, 1 year, and 2 years after each inversion.

Out of 7 inversion, SPY returns in 6 months were positive for only 3 of them. 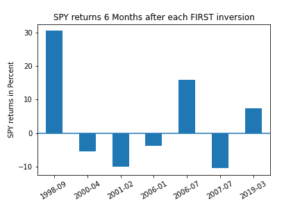 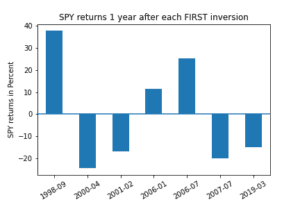 Out of 7 inversions, SPY returns were positive for 4 of them in 2 years. 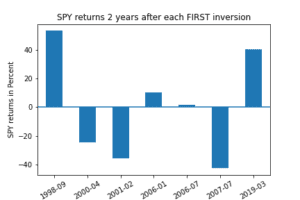 d. For each inversion

For our "false positive" inversion in 1998, we notice that SPY continued to go up. Considering there was no recession that followed, this makes sense. However, for the others, we see that there is no pattern at all. 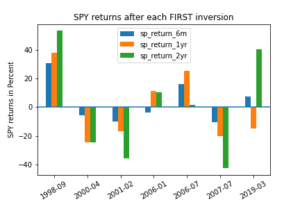 There were a few things I noticed that CNBC or these other news outlets did not mention in their articles. First, the number of inversions. We can see that there were 7 inversions for the last 3 recessions. In my project, I aggregated multiple inversions together based on a 6-month period. Had I not, there were even more inversions (21).

This then leads into the next question: are all inversions the same? Again, I focused on if there is something an investor/trader can do when the spread FIRST goes negative. However, not all inversions last the same amount of time. Perhaps, inversions of 5-10 days are not that big of a deal, and we should only being paying attention to ones that last over 3 months. 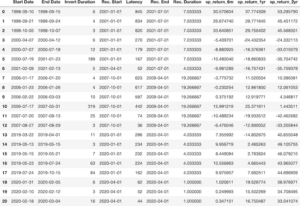 View all posts by Thomas Ouyang >