Sailing is not only a way to enjoy a sunny, windy day but is a chance to test your skills.  To get where you want, you have to be able to use the wind as you find it and set the angle of your sails that you control to use physics to your advantage. And, if that’s not enough challenge, you can race other sailboats so that now you want to maximize speed and optimize your path. 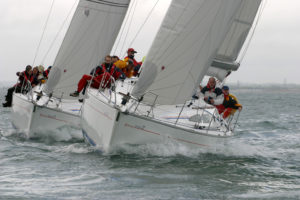 Photo by lustfish on freeimages.com

Different sailboat designs have different intrinsic speeds, due to many factors, including the length of the hull in contact with the water, the hull width and the sail area.  For example, longer boats have a higher maximum achievable speed, as described by

Therefore, to allow multiple designs of sailboats to race together, sailboat racing societies developed handicapping systems, such as the Offshore Racing Rule (ORR), This rule, like its predecessor the International Racing Certificate (IRC), handicaps (or increases the adjusted finished time upward from the actual elapsed race time) faster boat designs and adjusts downward the times for slower sailboat designs along the lines of e a golfing handicap that allows golfers of differing abilities to play together. The question we attempt to answer here is if the sail handicapping systems work. Do they truly equalize the odds between a faster sailboat design and a slower sailboat design, so the only difference is the crew?

We examined the efficacy of the ORR by examining the relationship between a boat’s ORR handicap and its adjusted finish time (time after the application of the handicap).  For the last 20 years of a single race, the Detroit-Mackinac race, run by the Bayview Yacht Club up the eastern shore of Michigan on Lake Huron. If the systems work as intended, there should be no relation between the handicap time and the final adjusted time.

We used the Selenium scraping library to gather race times over the period 2002 to 2019 from the Bayview Yacht Club race site.  We gathered identifying information for each boat, as well as the elapsed time and adjusted time.  From those latter two quantities, we calculated the handicap time applied to obtain the adjusted finish time.  An initial visualization of the adjusted finish time as a function of the handicap time yielded no insights. 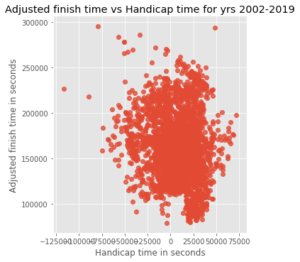 However, breaking the visualization down by year showed there were years in which there may have been trends between the two variables. 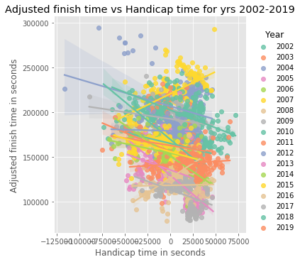 We further narrowed our focus, to the one division, Division 1, of the race that had generally raced the same course and allowed only monohulls (vs catamarans, which are intrinsically faster.)  Then we began to observe a trend within years with this focus, implying our assumption of no relationship between the handicap and the adjusted finish time may have been incorrect. 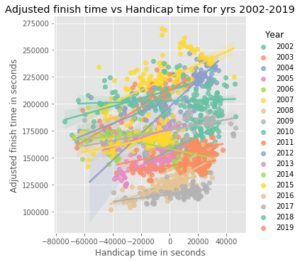 As we begin to examine specific years, we see a more marked relationship between the handicap and the adjusted finish times, with the times of faster (negative handicap) sailboats not being adjusted upward enough to compensate for their intrinsic advantages. The strength of the trend varies, as can be observed in the charts below. 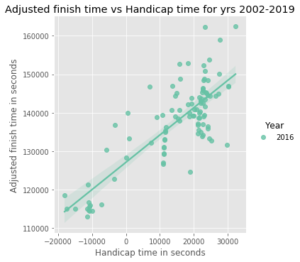 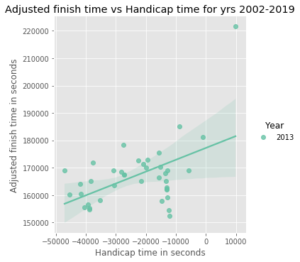 We examined the correlation between handicap time and the adjusted finish time as measured with Pearson’s R over the years of the race. 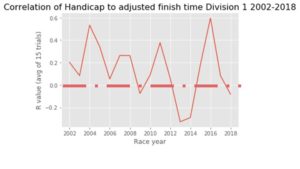 There are multiple years (e.g. 2004, 2011, 2016) that have relatively strong correlations, though other years (2013 and 2014) have negative correlations. The dashed red line is zero, and we observe the majority of years have a positive correlation. 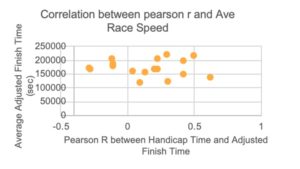 We found a current list of ORR measurements for a number of the boats in the previous Detroit-Mackinac races, with the understanding that some measurements may have changed and it included only some of our boats. We examined the relationship between the deviation of the adjusted finish time for a boat from the average adjusted finish time for all Division 1 boats for that year over the period 2002 to 2018 as a function of the various measurement parameters ORR used to rate the boat.  We found some boat measurement variables (from the ORR rulebook)  had higher correlations with the deviation from the adjusted finish time: measured trim displacement (disp.MT),  sail trim displacement, the area wetted along the hull, the righting moment at 60 degrees heel, the area of the genoa sail (a large jib) and the rated length of the boat (LOA.)  All of these are measures of the size of the boat, so are correlated with each other to some extent (e.g. longer boat as measured by LOA also tend to have a larger displacement.) We downselect to the measured trim displacement and the length overall since these appeared the least correlated with each other. The relationship between the deviation and the measured trim displacement (disp.MT) is: 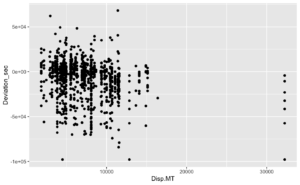 Though there is a large amount of variation, there does appear to be a relationship between disp.MT, LOA and the deviation time. We examined a linear regression model using both disp.MT and LOA, but found LOA was not significant (p<0.05) so we developed a model using only disp.MT. 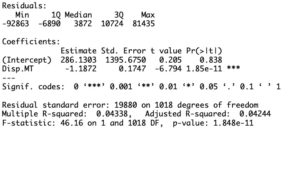 The measured trim displacement is a statistically significant variable in the prediction of the deviation of the boat's adjusted finish time from the yearly mean.  Given the difference between the maximum and minimum displacement is about 30,000lbs, which with this coefficient would account for 36,000 seconds or 10 hours by itself.  While the model explains little of the observed variation with an r-squared of 4.2%, the variation it does explain is also practically significant since the difference in races is often measured in only minutes.

We found that the handicapping system doesn't appear to be working as intended, in that it appears to favor larger, faster boats that are already advantaged in racing. This difference in 2016 alone was about 8 hrs and 20 minutes, in a year when the difference between first and tenth places was about 50 seconds of adjusted time. Consequently, the effect of the bias in the system can be significant.

The fact that it appears to happen in some years but not in others led us to assume that weather may be causing it, but there is no obvious correlation with wind speed. It could be other meteorological phenomena, such as wind direction, as it is well known that some sailboats perform better "upwind" (sailing nearly toward the wind) than others simply by design. Our analysis indicates that parameters directly related to sailboat size, displacement, can cause the sailboat performance to be faster than predicted by the handicap system.  Therefore the ORR should consider improving its model for predicting sailboat speed with a focus on compensating for boat size.

Our model predicts only a small part of the overall variation.  One direction worth more investigation is weather data for Lake Huron on the race dates in question since we see a clear yearly variation that could be explained by weather. One could scrape marine weather data from the National Weather Service website with more research. Another area of research, to see if this phenomenon is more general, would be to examine a similar set of data from the Chicago-Mackinac race, which is also an inland body of water. Conversely, since the Newport-Bermuda race is oceanic where weather conditions tend to be more constant we might be able to remove the importance of weather.

Code and data can be found in a Github repository here.